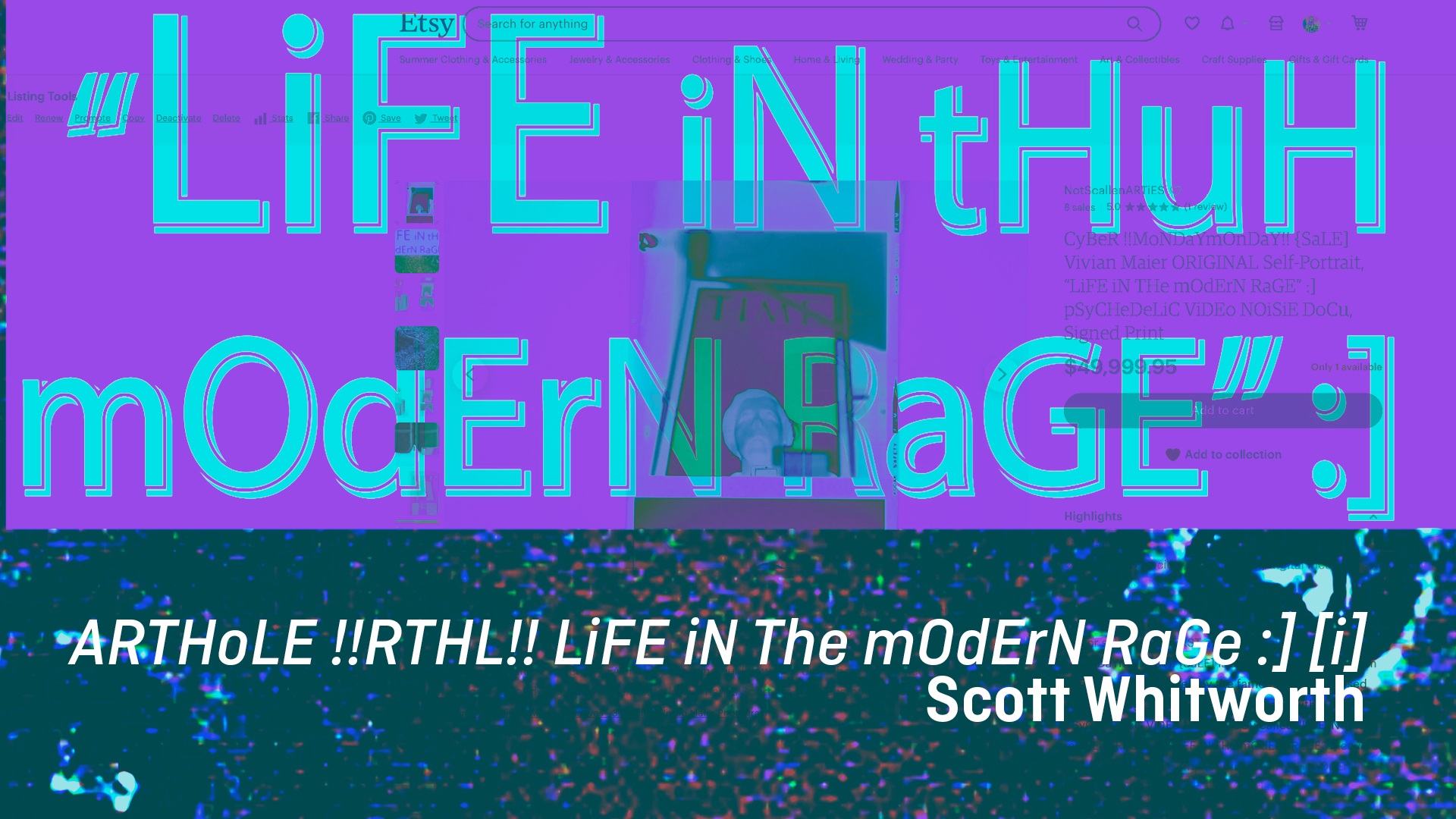 "ARTHoLE !!RTHL!! LiFE iN The mOdErN RaGe :] [i] is my attempt to break the TRaNCE brought on by the Gilded Age that never ended. Now that we dun' gone DiGiGiLDi as a society - ima take a moment to reflect on how the fast-paced NOiSE oNSLAuGHT of the modern age leads to a LiFE in the mOdErN RaGe. Throw on my experiences for size and be tormented as you are watched on CCTV by a vindictive boss whose inappropriate behaviors you've just reported, working backwards with Indiana University's H.R. staff, dealing with the art world and Vivian Maier's photography negatives, getting fired (!LIVE!), being hunted by Indiana Uni- versity's own Police Department, being vaguely threatened, and so much more! Follow all of your anxieties concerning society straight into the ARTHoLE. In a present that is inundated with H. Sapien lies, corruption, time theft, populations being forced onto a grid of BLuE LiGHT hELL, DiGiGiLDi iNDeNTuRED SERViTUDE, and… - does any H. Sapien have autonomy? Congratulations Edward Bernays! Think twice on it now, double-think it later :] ATTN: !!FEATURING irL HiDDEN TREASURE!! - Collect the ENTiRE set of RaRE QR CODES hidden throughout the installation videos :] (Q.R. reader necessary)"

Scott Allen Whitworth, or notscallenshitworth, is a hominid reported to have been born in Michigan, United States, 1989. After birth, Shitworth was reportedly removed from their biological mother by forced illegal adoption and placed into a physically and mentally abusive family environment for raising. Shitworth was inspired by the anxiety from this environment to observe in great detail the behav- iors and behavior patterns of those around him. Shitworth developed these obser- vational skills further when they began taking film photography courses late in high school. During this time Shitworth also further developed their mental illness. Shit- worth has paid for a BFA degree and MFA degree in photography. Shitworth's artwork focuses on societal issues, the nature of knowledge, mental health, addiction, and exploring the many lies and contradictions within H. Sapien & Society.