For the Whole World to See: KCAD’s Michele Bosak to Curate the Blue Bridge for ArtPrize ’13.

Securing an ArtPrize venue is a lot like searching for the perfect house. It’s all about location, location, location. Take the Blue Bridge, for instance: calling the iconic landmark an artist’s dream is hardly an exaggeration.

Stretched out in front of the Grand Rapids skyline, the prominent pedestrian bridge is both a literal and figurative connection between the condensed bustle of downtown and the openness of the city’s west side. During ArtPrize, it’s almost impossible to go anywhere near the river without it catching your eye.

Michele Bosak knows this, which is precisely why she applied to be the curator of the Blue Bridge for ArtPrize 2013. The contest appoints nine curators to manage twelve city-owned venues. Bosak, who was recently named Curator of Exhibitions at KCAD, stood out in the extensive juried process. 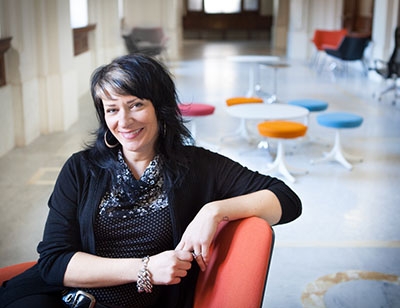 “Michele is a remarkable local curator and artist,” said ArtPrize Exhibitions Director Kevin Buist. “For two years, she played a large role in curating both KCAD's campus galleries and the Women's City Club Exhibition Center, and now co-curates KCAD as an exhibition center. She has also participated in ArtPrize as an artist. Given her experience and plans for the Blue Bridge, we were happy to award her the contract.”

Crafting a dynamic proposal, Bosak said, required careful study of the bridge itself. “Going to the space, seeing how people interact with it, how many different vantage points [artwork] can be viewed from: These are all different aspects of approaching this venue.”

In years past, the Blue Bridge has usually hosted multiple artists, but Bosak had a different idea: Why not take advantage of the bridge’s immensity and visibility by allowing a single artist the freedom to maximize the venue’s creative potential?

She found her perfect partner in Liz Miller, a mixed-media artist from Good Thunder, Minn. The pair had previously worked together during ArtPrize 2012, when Bosak was curating KCAD’s multi-artist exhibition, “Role/Play.” Miller’s piece, entitled “Imperious Decorum,” was a massive felt installation, which was draped from the roof of the atrium inside KCAD’s 17 Fountain building. 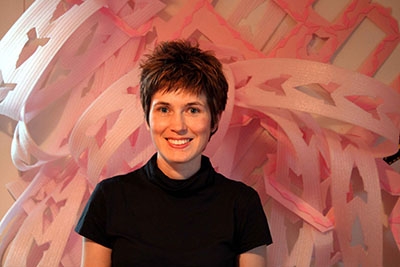 “Liz works a lot with decorative images that are found throughout many art design periods, then breaks them down into their simplest forms and blows them up into patterns,” said Bosak. After surveying the Blue Bridge, she knew that Miller’s artistic style and vision would be valuable creative assets. “Because of the flexibility of her materials and the scale at which she works,” she said, “it’s going to be a great pairing.”

“Imperious Decorum” wasn’t Miller’s first foray into the arena of large-scale public installations. She has more than twenty such works to her credit, and they’ve been displayed in galleries around the country. But she’s never undertaken an outdoor project of this magnitude.

Living and working in Minnesota meant that Miller had to get acquainted with the Blue Bridge digitally at first. Bosak served as her tour guide, sending her photos and dimensions of the site.

“Michelle’s been great to work with in the sense that she’s organized, but she also gives you as an artist a lot of flexibility and doesn’t try to be too much like an art director,” said Miller.

Flexibility has been the operative word in their partnership. Bosak’s willingness to go above and beyond normal curatorial responsibilities, Miller’s determination to wade into personally uncharted artistic waters, and the vast display possibilities of the Blue Bridge itself have all culminated in the conceptualization of Miller’s piece, “Hydro Anthem.” It’s a perfect example of the synergy that should exist between curator, artist, and venue. 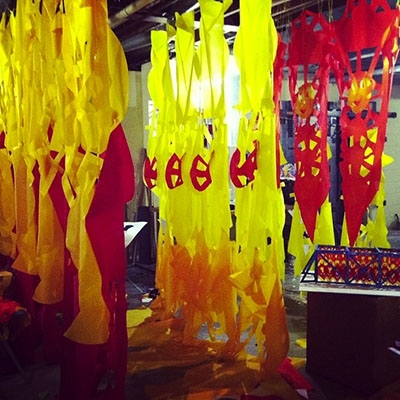 “I usually try to get a good idea of what the choreography of the work will be, how it will move through the space,” said Miller. “For me, one of the things that’s really exciting about installation is having that opportunity to be responsive to the site.”

This time around, being responsive meant using as much of the space as possible to create an installation that viewers could engage with up close as well as from afar. “Hydro Anthem” will span all 575 ft. of the bridge’s length on both sides, using bright colors and bold patterns to create a tunnel of light, shadow, and movement. 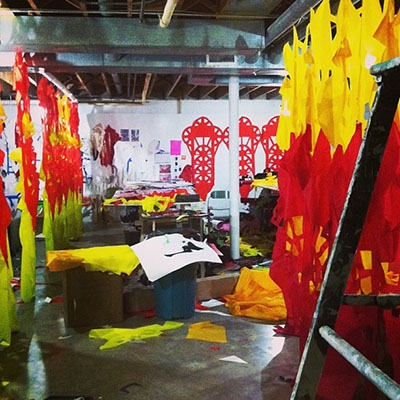 “There’s this idea of walking from one side of a bridge to the other to get somewhere, which hopefully changes the viewer’s experience and has them become part of the work,” said Miller.

Working outdoors, especially in Michigan, demanded a material that could withstand a variety of elemental forces. Forgoing the stiffened felt she used in 2012, Miller instead chose a nylon-based fiber that, while pliable, is still strong enough to retain its shape and vibrant color in wind, rain, snow, or direct sunlight.

“For me, [this installation] is something that’s going to be really new and really exciting,” said Miller. “It presents a lot of different possibilities for where my work could go from this point forward.” 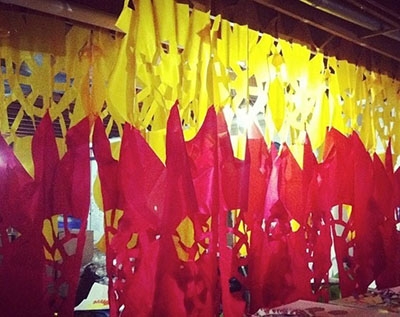 It’s interesting to note that before she was invited by Bosak to participate in ArtPrize 2012, Miller had no intention of independently submitting work to the contest. Like many in the art community, she’d heard a mixed bag of opinions about the event, which is described on its official website as “unorthodox, highly disruptive, and undeniably intriguing.” Seeing ArtPrize firsthand gave her a fresh perspective.

“It really changed my view of [ArtPrize] to be there, because some of the negative things I’d heard about it were in regards to the fact that it’s very democratic, and that you can’t control quality in something that large and democratic,” she recalled.

What Miller and so many others have found “undeniably intriguing” about ArtPrize is how it has managed to change the conversation about what art is and how we perceive it. Rather than simply holding quality up for debate, the open public format allows for the measurement of an artwork’s impact, how it elicits internal emotions and creates external dialogues. Miller and Bosak’s Blue Bridge collaboration is symbolic of that larger sense of possibility, one shared by ArtPrize and institutions like KCAD that support the inclusive mission of the event. By constantly seeking new and innovative ways to explore and expand the role of art in society, ArtPrize brings art to the people and vice versa.

“It’s a celebration of all different kinds of talent and people working in so many different ways,” said Miller. “I could see that it really engages the community in a meaningful way.”