Artists and their Spaces

“What we do in our studios has to find a way out into the real world,” Paul Amenta, a Grand Rapids artist and teacher, told students at the recent Fine Arts Career Day at Kendall College of Art and Design. 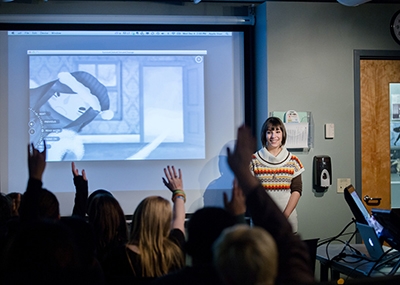 He was one of four local artists who were asked to talk under the umbrella title of "Artists and their Spaces." As might be expected they each took a different tact in their presentations.

A connecting link is that they are all involved in the Avenue for the Arts in Grand Rapids, where galleries are popping up and many artists enjoy their live/work spaces.

Paul Amenta draws inspiration from the space in which he works to create site-specific work, and has done this since he first became interested in art in college.

In Grand Rapids he started Activesite and then co-founded Site:Lab. Site:Lab, as described on the web site, “creates temporary site-specific art projects aimed at facilitating dynamic collaborations between the art, education, business and cultural communities of Grand Rapids.”

The large and exciting installations have drawn local attention and gathered a lot of participation by students in the area. 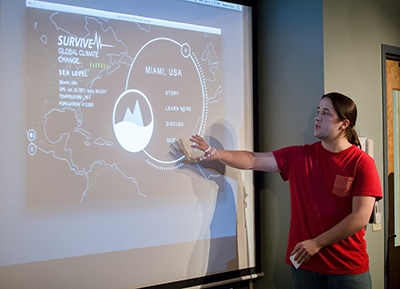 Reb Roberts, with Mardi Gras beads gaily wrapped around his neck, explained that he is from New Orleans and brings with him the vibrancy and festive atmosphere of that city.

He paints on all kinds of spaces. The tree in his front yard. Empty store fronts and abandoned buildings. The blades of snow plows.

Some times his work changes neighborhoods. His goal: bring art to areas where it wasn’t happening even if it gets torn down. He perseveres.

Eventually his creative efforts led to a gallery called Sanctuary Folk Art located on the Avenue for the Arts.

He advises students, “Look around you and do your art were you can.” 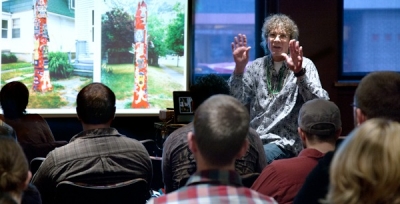 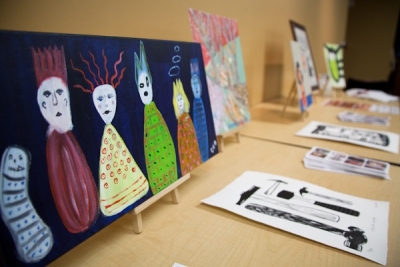 Sarah Scott, the director of the Heartside Gallery and Studio on the Avenue for the Arts, works with the homeless and those with mental health issues.

She’s so passionate about the folks she works with that she donates half of whatever she earns selling her own work to the Studio to buy supplies for those who have no resources to do so for themselves.

Her message seemed to be that one can be creative in lots of different venues with people of all walks of life.

Brad VanderMoere, the last speaker of the day, also operates a gallery on the Avenue for the Arts. His path to gallery ownership included painting signs, decorative painting, restoration work and even paint sales.

“My goal has always been to make a living with a paint brush,” he said.

Brad’s closing comment to the students was, like all the other advice, really worth listening to. “It's been my experience that, as people, we never know when an opportunity will present itself. When I got older, I realized that as a young artist (person), I didn't have that ability to recognize opportunity. When they were presented, they were taken for granted or I was unaware. It wasn't until opportunities passed that I then recognized the impact of that oversight.”

He advises, "Learn to recognize opportunity." 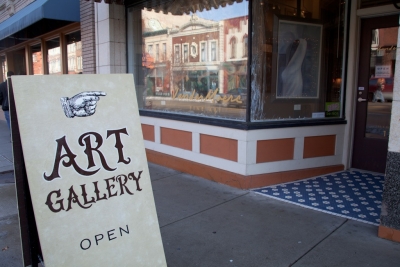