Bleeding Through: Creative Drive Leads Painting Student from the Coast Guard to KCAD

In this installment of Prototype, we profile Painting student Jason Betzing.

A cold fear coursed through Jason Betzing’s veins as he hunched over his friend and Coast Guard shipmate. Betzing had been in the tattoo chair himself many times before, but this was different. Like life itself, the buzzing needle gripped in his hand held no promise of a do-over. There was nothing left to do but go for it.

Betzing, a 40-year old father, grandfather, 20-year veteran of the United States Coast Guard, and current KCAD Painting student, never thought he’d end up a tattoo artist or an art student. Still, he’d cultivated a passion and talent for artistic expression from a young age, and continued to hone his skills as he got married and had his first child while still in high school, before eventually joining the military.

Now in his second year in the Painting program, Betzing feels his military training has prepared him for many of the challenges he’s faced at KCAD. The military’s emphasis on teamwork, for instance, has helped him excel in collaborative projects like the mural he and two other students created for Mary Free Bed Rehabilitation Hospital. “The military is this environment where creative problem-solving and information sharing are vital,” he says. “It teaches you not to be greedy with what you know.”

The sense of order and discipline that first attracted Betzing to the military also translates to his work at KCAD, as process and dedication are crucial to an artist’s ability to create. “As an art student, if you’re not going to do the work early and get on it, someone else will,” he says. “If you’re not moving forward and trying to progress yourself, someone else will pass you.”

Betzing has been trained in combat, advanced mechanical engineering, business, marketing, and now, fine art, and it’s the synergy among those elements that he believes has defined him both personally and artistically.

“I see life as a chance to reinvent myself periodically, and I have these things that happen in my life that allow me to create opportunities to be different and do what I want to do,” he says. “But all these aspects of my life fit together, and they all bleed through to the art.”

While working his way up the Coast Guard’s mechanical engineering track, Betzing did a lot more than wrench on things. He and his fellow crewmembers often had to arm themselves and board other ships suspected of illegal activity. He also worked on ice breaking ships and taught ice rescue techniques, and even helped protect President George W. Bush and his family on yacht trips near their vacation home in Kennebunkport, Maine.

Between deployments, while his shipmates went out in search of R&R, Betzing took college courses online, eventually earning a degree in business administration and marketing. “I have a real entrepreneurial spirit, so I thought a Business degree would help me develop that as well.”

Meanwhile, Betzing kept developing his artistic practice. After high school, he had been hired to paint a few residential murals, and while stationed in North Carolina with the Coast Guard, his work in colored pencil earned him representation by a small gallery/frame shop.

More of Betzing's work at KCAD - (above): a painting; (below): a drawing of Poseidon (images courtesy of Jason Betzing)

“The community down there is really supportive of art, like Grand Rapids. The gallery knew I was an up and coming young artist and they would promote my work to the point where my pieces were selling before I’d even finished them,” he says. “I hated to leave that place, because that was a point in my life where I really got my creative spark back.”

Fortunately for Betzing, his colored pencil drawings had also caught the attention of his Coast Guard friend. Despite his lack of experience working in the medium, Betzing’s first foray into tattooing in 2006 was wildly successful. “He liked it so much that once other people heard, they started coming to me too,” he says. 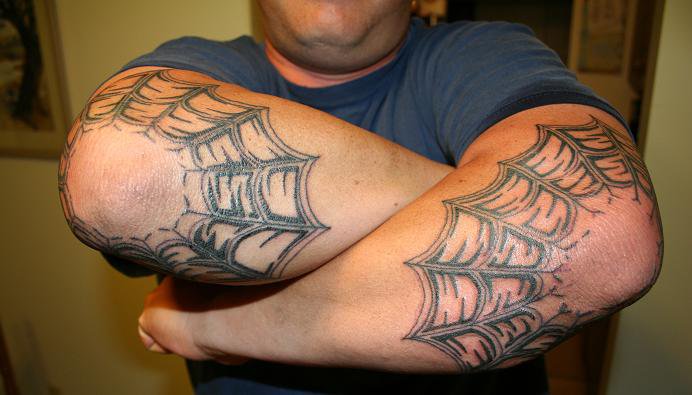 At first, Betzing says he was losing money on the venture, but it wasn’t long before his entrepreneurial mindset kicked in. “I adopted an ‘anything you want for $40’ policy, and I took every dime I made and poured it back into the business, slowly building up equipment and getting better quality tools.”

Betzing’s business continued to grow, as did his tattooing skills and his passion for a medium that he had long loved from the other side of the artist-client relationship. “With tattooing, it’s the connection,” he says. “When you sell a work of art, a lot of times you don’t even know who bought it; with tattooing, every piece has a name, and there’s a story or a reason behind the person who’s getting it, so there’s this human connection that you don’t get with other types of art. It’s 2D art on a living, breathing person - that’s always been amazing to me.”

(above): Betzing at work on a client; (below): more of Betzing's finished tattoo work (images courtesy of Jason Betzing) 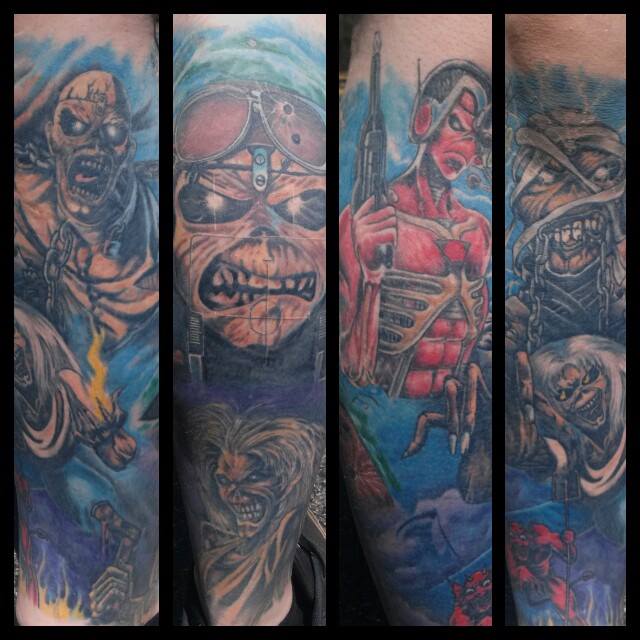 In 2011, while still enlisted in the Coast Guard, Betzing began working at A.W.O.L. Custom Tattooing in Muskegon, where he worked until his recent retirement from tattooing. His tattooing skills had gotten even better on land than they were at sea; he was typically booked out three months in advance, and specialized in custom work, priding himself on building strong relationships with his clients that are founded on respect, trust, and kindness. 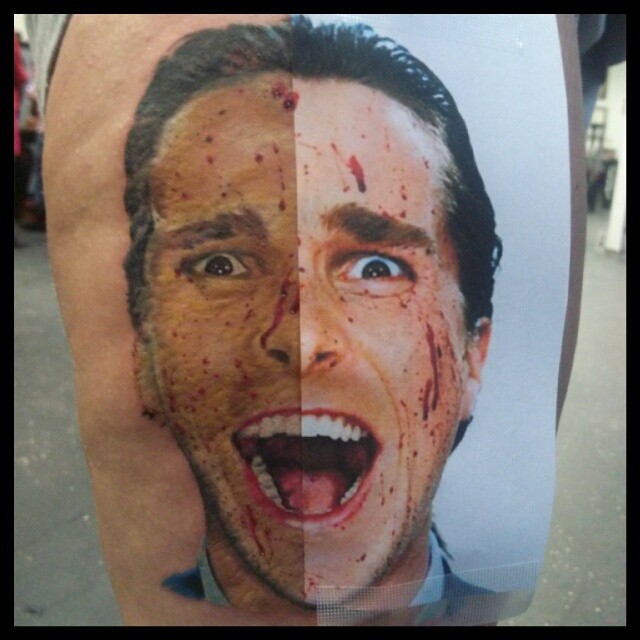 (above): Betzing's tattoo of Christian Bale as Patrick Bateman in the film "American Psycho" next to a refrerence photo; (below): A finished tattoo of Yoda (images courtesy of Jason Betzing) 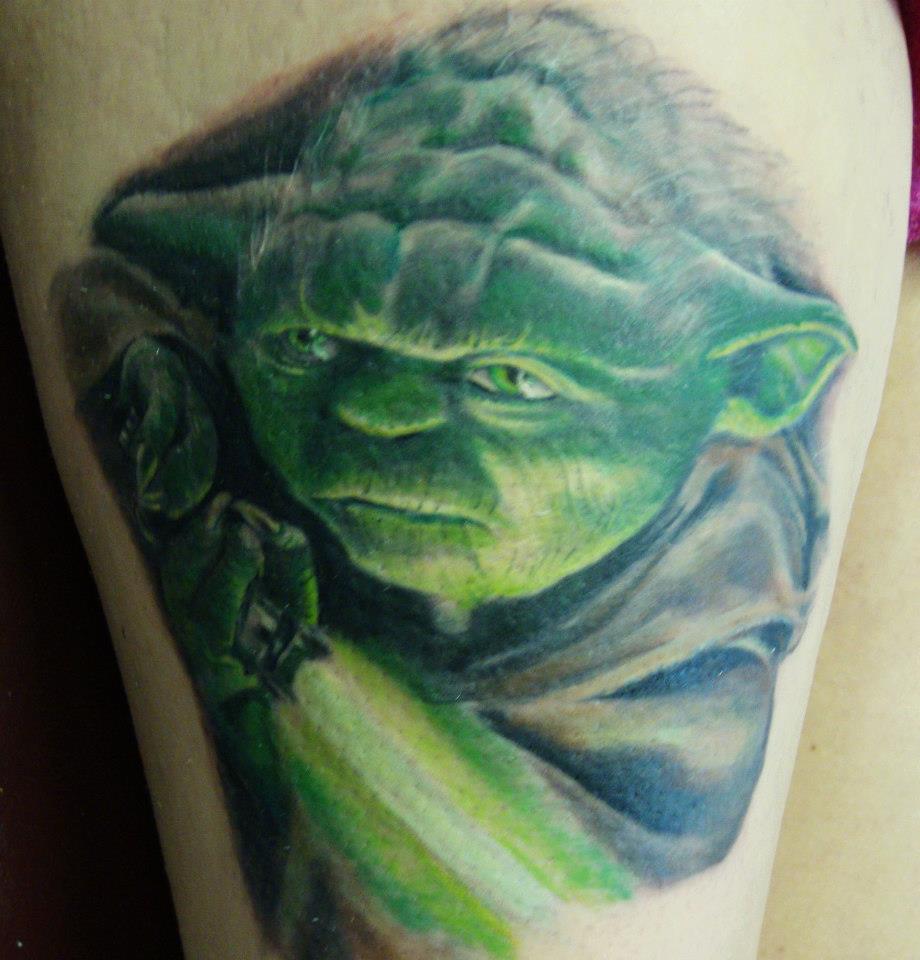 “You have to be delicate because the ego and the rock star attitude really turns people off,” he says. “I try not to be like that; I’m just a dude who draws pictures that just happen to be on skin. I’m not special. You just have to take it case by case and remember that the client’s happiness is all that matters because they’ll be living with this piece for the rest of their lives.” 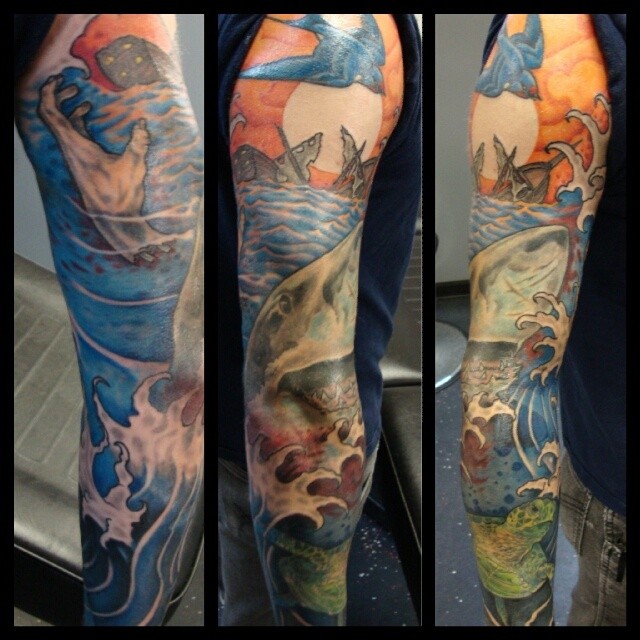 As Betzing began to think more seriously about life after the military, he felt increasingly pulled in a creative direction and was seriously considering art school.

A trip to Germany for a one-month tattoo residency in the summer of 2014 all but sealed the deal. “It helped me see that it wasn’t a dumb idea to be a 40-year old man going to art school,” he says.

Though he had already tasted success as a professional artist, the Painting program was Betzing’s opportunity to gain the artistic foundation he never had. “I had no formal training. Even though I was selling gallery pieces and was making some cool stuff, I didn’t really know what I was doing,” he says. “I wanted to learn the rules so I knew that I was breaking them properly.”

Betzing knew that he wouldn't be able to tattoo forever, but like the military, he sees tattooing as just another stop on his journey. Eventually, he hopes to earn his MFA from KCAD so that he can become a teacher and lead others to the kinds of experiences and opportunities that have shaped him as an artist and a person.

“There’s tons of knowledge sharing in the military, and tons of teachable moments, and I think you see that in the art world too,” he says. “Teaching almost feels like the pinnacle for me. Now that I look at it with open eyes, I feel like I’ve been groomed to do this my whole life. It all kind of fits, so that’s what I’m focused on doing.”