What is Collaborative Design? Step 1: Research

Samantha Macy is a collaborative design major who is interested in printmaking. This is the first post in a series about the Collaborative Design program. First: Research.

Design is all about process, and that's especially true of large, long-term projects. This semester, I took Collaborative Projects, and we worked with the Grand Rapids Public Museum to create a traveling exhibit. More specifically, we were creating a system for a traveling exhibit, which means that our design could be used for a variety of applications - it could be the base for an exhibit about vintage clothes or futuristic technology. We were to test out that system with the collection of miniature chairs that George Beylerian donated to the Grand Rapids Public Museum, and have it on display at the old public museum building, during SiTE:LAB Workflow.

The first step in the our process was research. On the first day of class, we went to the Van Andel Museum Center to take a tour of the public museum. We walked around the whole museum, including the offices where exhibit pieces are planned and built, which was particularly interesting. In my mind, tables and display blocks have always just been there, but everything has to be built for an exhibit, and it happens on-site. We also had the chance to talk to curators about different parts of the museum. Most of the exhibits at the public museum have been there for ten years or longer, except for traveling exhibits. The curators felt that changing the long-term exhibits might entice people to visit the public museum, even if the traveling exhibit isn't something that they're interested in.

On the next day of class, we took a tour of the public museum archives. The archives are in a fairly new building that's attached to the old public museum building. They have collections of all sorts of historic objects, including extensive collections of furniture and vacuums, and the archives of the Grand Rapids Press. One thing that I found to be really interesting was the number of animals in the archives. When the museum was much newer, the curators would go on expeditions to find animals for the museum, some of which went into their numerous dioramas built in portable boxes. This used to be a part of a connection between the museum and area schools, the museum would allow teachers to borrow a diorama relating to what they were teaching at the time, like a miniature traveling exhibit. The idea of a diorama as a teaching tool seems antiquated, but miniature traveling exhibits are worth considering. Since then, we've referenced this idea numerous times in class - taking something that's happening in one place and allowing it to be accessed from elsewhere. With small dioramas, the number of places it could be accessed from is fairly limited, but with the internet, the possibilities for access are unlimited.

For our research, we visited The Henry Ford Museum. We were on a mission to see how different styles of exhibit worked for them, and see how people interacted with the exhibits. The museum almost feels like it's happening at different stages of exhibit design. There's a large exhibit about various struggles for freedom in the United States, which links together American independence, the abolition of slavery, women's suffrage, civil rights, and labor movements. This exhibit feels modern and links together a variety of artifacts, and uses some interactive features.

The next museum we went to was the Broad Art Museum, the art museum at Michigan State University. This museum was very different from the Grand Rapids Public Museum or the Henry Ford, probably because it's strictly an art museum - there weren't any cars or dead birds to be found, and the building, designed by Zaha Hadid, was a major factor in the way the museum worked. The Broad Art Museum seemed like it was aimed at an older crowd - it was almost entirely adults when I visited. I think the Broad Art Museum was interesting from a curatorial standpoint, and from an architectural standpoint, but in terms of how the exhibit worked, it wasn't doing anything particularly original.

After each of these visits, we debriefed, as a class. We discussed what we learned, interesting things we noticed, and how different institutions displayed different types of artifacts. This research was crucial to our work. Without research, we would be wasting time, either by trying to reinvent the wheel, or by doing things that weren't working at other exhibits. I think it's often overlooked, because it isn't a particularly glamorous part of the design process, but it has the power to make or break the final product.

This picture is one of the exhibits at the Public Museum, about communication technology. 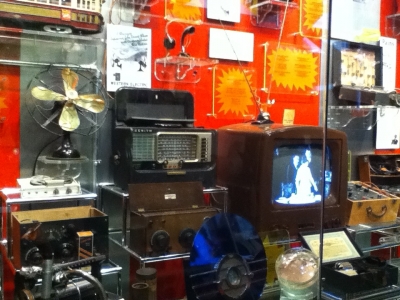 This is from Thank God For Michigan, an exhibit about the civil war that was very successful. 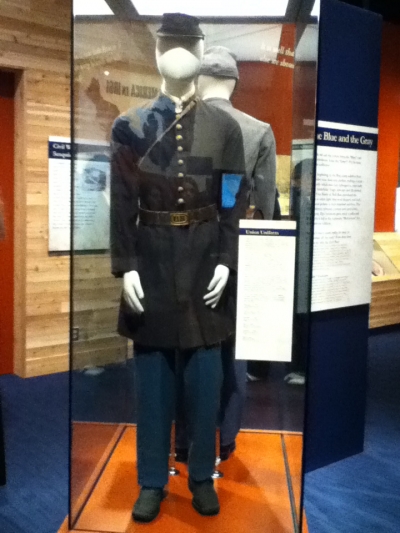 This is another part of the civil war exhibit, aimed at children, a tent visitors can go in, with a camp area set up nearby. 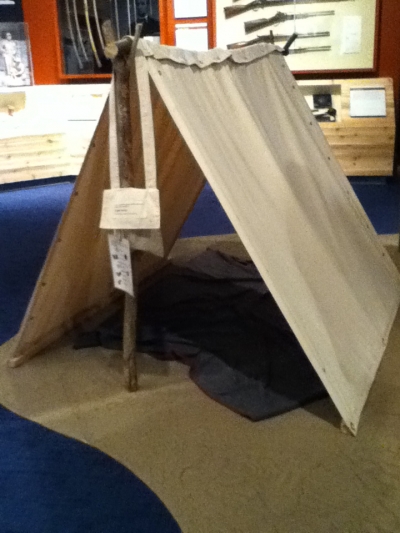 The next post in this series will be about our process and how we worked together as a class.

~ Words and photos by Samantha Macy