As the waves lapped softly at the walls of the Grand Canal, Nicolas Sanchez sat immersed in what would become the most pivotal work of his young career.

After turning heads in an exhibition at the Accesso Galleria in Pietrasanta, Italy, the KCAD alum (’09, Painting) was offered the incredible opportunity to spend the month of March exploring and creating artwork in the cultural treasure trove that is Venice. The five small notebooks of intricate ballpoint pen drawings he produced earned Sanchez a place in “Personal Structures – Crossing Borders,” an exhibition organized by the European Cultural Centre that was recently held during the 56th Venice Biennale.

Sanchez near the Grand Canal in Venice, where he spent a month living and creating new work (image courtesy of Nicolas Sanchez)

Housed in the prestigious Palazzo Mora in Venice, “Personal Structures – Crossing Borders” featured a diverse lineup of high-profile artists from all over the world, and given the show’s proximity to the Venice Biennale – one of the oldest, largest, and most prestigious contemporary art exhibitions in existence – Sanchez had the opportunity to expose himself and his work to a massive international audience.

“When I first heard I’d been accepted into this exhibition, I was overwhelmed and didn't know what to say,” Sanchez said. “It was completely unexpected. I was in disbelief, but very excited.”

The month in Venice proved pivotal for Sanchez, who used his time there to create new drawings that he'll be showing in an upcoming solo exhibtion in Italy (image courtesy of Nicolas Sanchez)

With its deeply embedded sense of tradition and history, Venice was the perfect place for Sanchez to continue exploring an idea that’s defined much of his previous work: that his identity is being simultaneously lost and created through attempts to preserve his family’s Mexican heritage. Many of the pieces in is new notebooks are portraits. Sanchez uses subtle facial details and body language as a novelist would descriptive prose, creating masterful visual narratives of this tension between individual and collective identities. In stark contrast, some of the pages are left blank, playing with the idea of memories made and lost.

“In Venice, I was surrounded by beautiful landscapes, architecture, and art, as well as the Venetian people’s strong sense of family pride paired with family hardship, and these are all elements explored in my work,” said Sanchez. “It was the only residency I’ve done where I was alone for most of the trip. It was lonely at times, but it was great to be alone with my thoughts.” 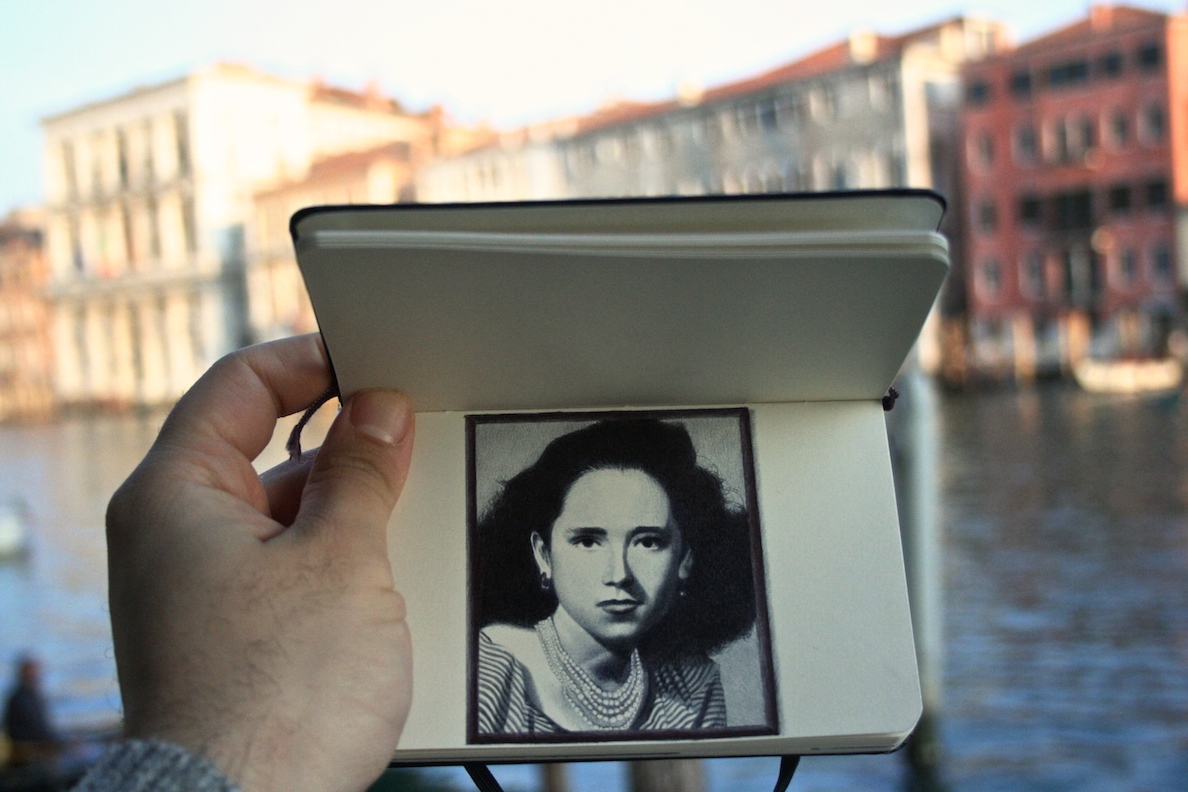 Rather than seeing the small surface area of each notebook page as a limitation, Sanchez challenged himself to use the non-traditional medium to spur deeper engagement with his art. “I wanted to make drawings that were best suited to that scale,” he said. “The small scale preserves an intimate experience for the viewer where they are physically handling the book and turning the pages, which mirrors my experience creating it.”

Since moving to New York City in 2011 to earn his MFA from the New York Academy of Art, Sanchez has become a fixture in the city’s ultra-competitive gallery scene. And when you earn that kind of reputation in the art capital of America, it isn’t long before big international exhibition opportunities come knocking.

Sanchez has already been a part of group exhibitions in both Italy in China, but in the wake of his acceptance into “Personal Structures – Crossing Borders,” Sanchez learned that he’d been granted his first solo exhibition in Europe. Beginning July 18 at Accesso Galleria, the exhibition will showcase the full range of his studio practice, featuring a new body of paintings alongside some of the colored ballpoint pen drawings he created during his residency in Venice.

To hear Sanchez tell it though, location isn’t what’s most important. No matter where he shows his work, he’s really just hungry for lasting connections between his art and the people who experience it.

“Whether it's overseas or back home in Michigan, each community has its own valid appreciation for art,” he said. “It's fascinating when different people from different parts of the world can relate to my work. I am so grateful that my work has taken me to different places around the world, but what's most invaluable to me is the exchanging of stories and ideas with others when talking about my paintings and drawings. This is how I learn and grow.”