On Monday, we crawled the floors of NeoCon (not literally, of course), seeing great design. Tuesday, our brains were as packed as the showrooms as we had the opportunity to hear from four great speakers. In fact, we learned so much, I’m going to cover just two speakers today, and tell about the others in later blogs.

Our day began with keynote speaker, Amy Wells. If you’ve never heard of her, then you’re obviously not one of the 1.5 million fans (several Kendall faculty and myself included) who are addicted to AMC’s television series, “Mad Men.” 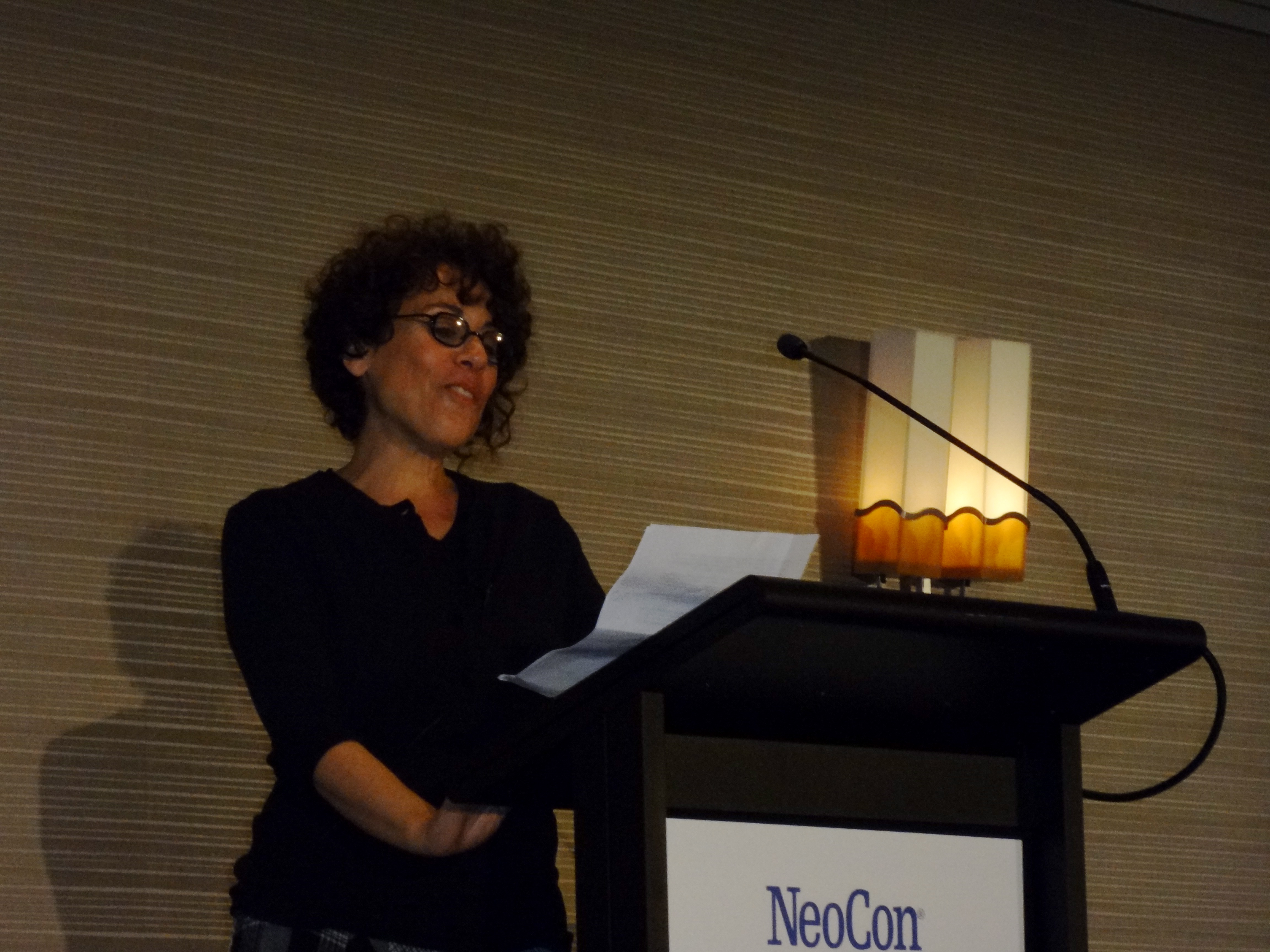 I’ll admit it; we rushed to the front of the room, and got seats in the second row. Wells was siting in the front row, waiting to speak, and as soon as we discovered her, we peppered her with questions that ranged from the authenticity of ceiling tiles, to the artwork used in Bert Cooper’s Asian-themed office.

In case you aren’t familiar with the series, “Mad Men” is set in the mid-1960s and is truly authentic, from actors’ hairstyles and clothing, to the series’ numerous locations that range from a middle class house in the suburbs to a bustling Madison Avenue advertising agency. Wells grew up in 1960s Rockland County NY, where the nicer families’ furniture was covered in plastic, and where she snooped in neighbors’ drawers and cabinets to see how they lived. She earned her undergraduate degree in film and TV production from the University of Southern California, and her film credits include “American Pie,” “Clueless” and “A Single Man.”

Wells was quick to point out that she is a set decorator, not an interior designer—sometimes to the dismay of friends who want her to redecorate their homes. A self-described scavenger hunter, Wells told us she often only has one week of long, 14-hour days, to prepare a set. A fanatic for details, she calls her 1960s copies of “Architectural Digest,” “Interior Design” magazine and the Montgomery Ward catalog her bibles that help her get every detail right, from the sofa in Don and Betty Draper’s living room to the rows of canned peas in the grocery store where Betty shops. 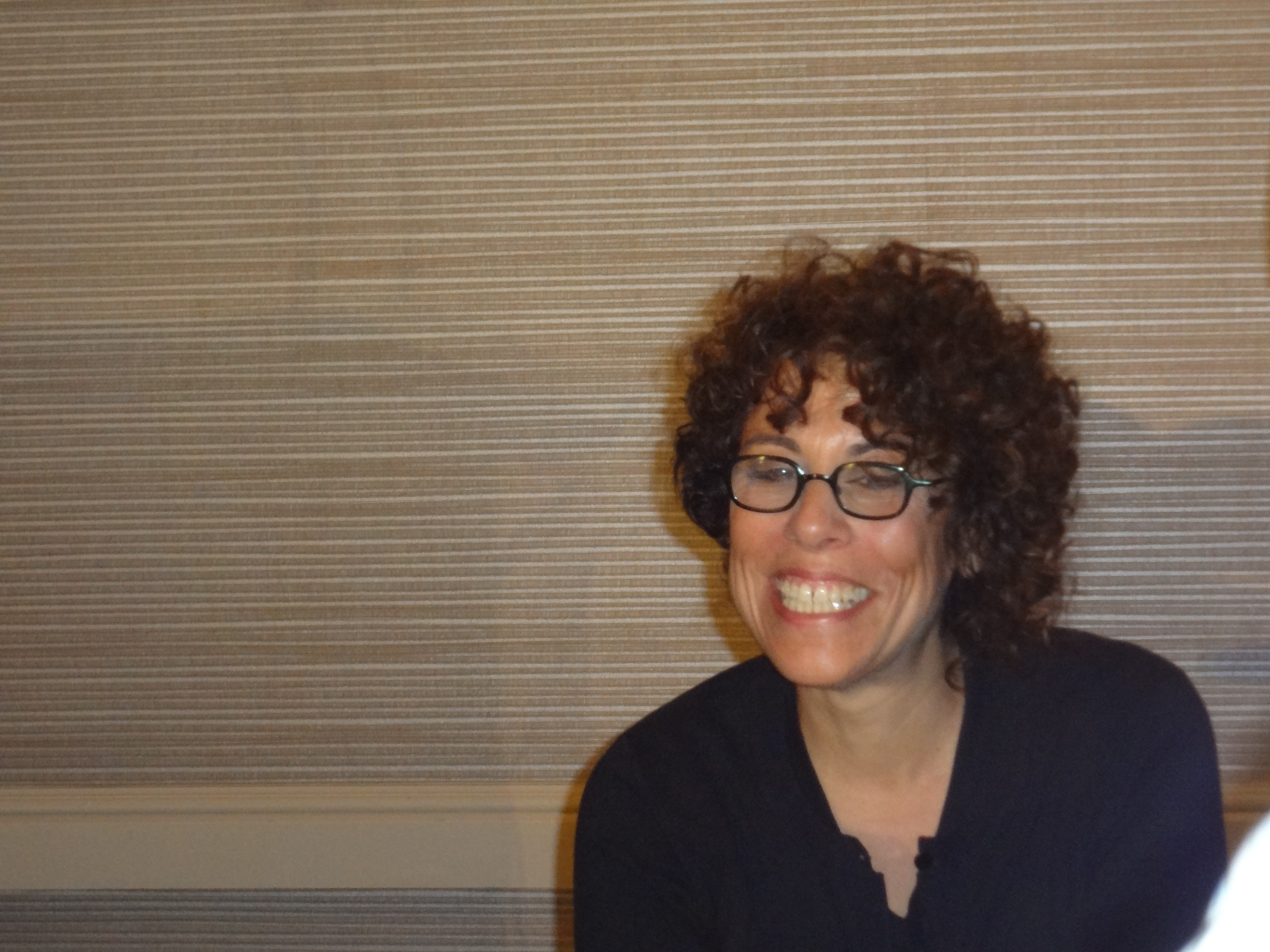 Wells’ advice to students who might consider a career in set decoration? Know how to work with a small budget, be able to conduct research, develop a relationship with owners of thrift and second-hand stores (where she find most of the items she uses), and be able to collaborate with the rest of your team. 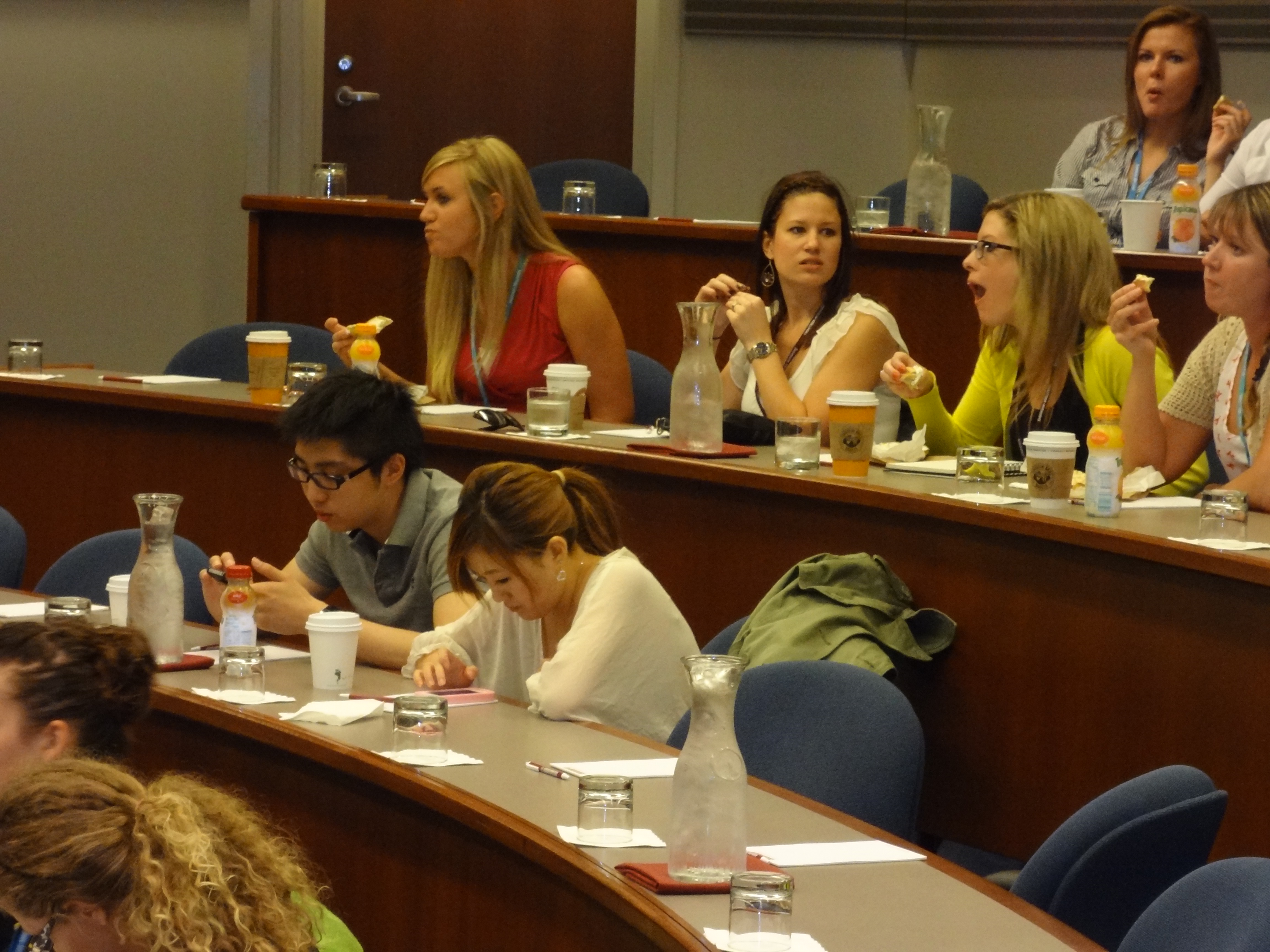 Then we went off into the beautiful Chicago sunshine to the Gleacher Center at The University of Chicago Booth. We heard from three wonderful speakers, but I’m going to talk about the last first, Seattle-based designer George Simons.

Entertaining and though-provoking, Simons began his presentation with a story about his encounter with a man in a wheelchair in a Seattle park. As he spoke, he drew us into his tale: Who was the man in the wheelchair? What did he want? Should George be wary of him? Why didn’t the man speak? Turns out, the man was legless, had been severely burned and disfigured in the Vietnam war, and he needed George’s help—because a wheel on his chair was caught in a sewer grate. 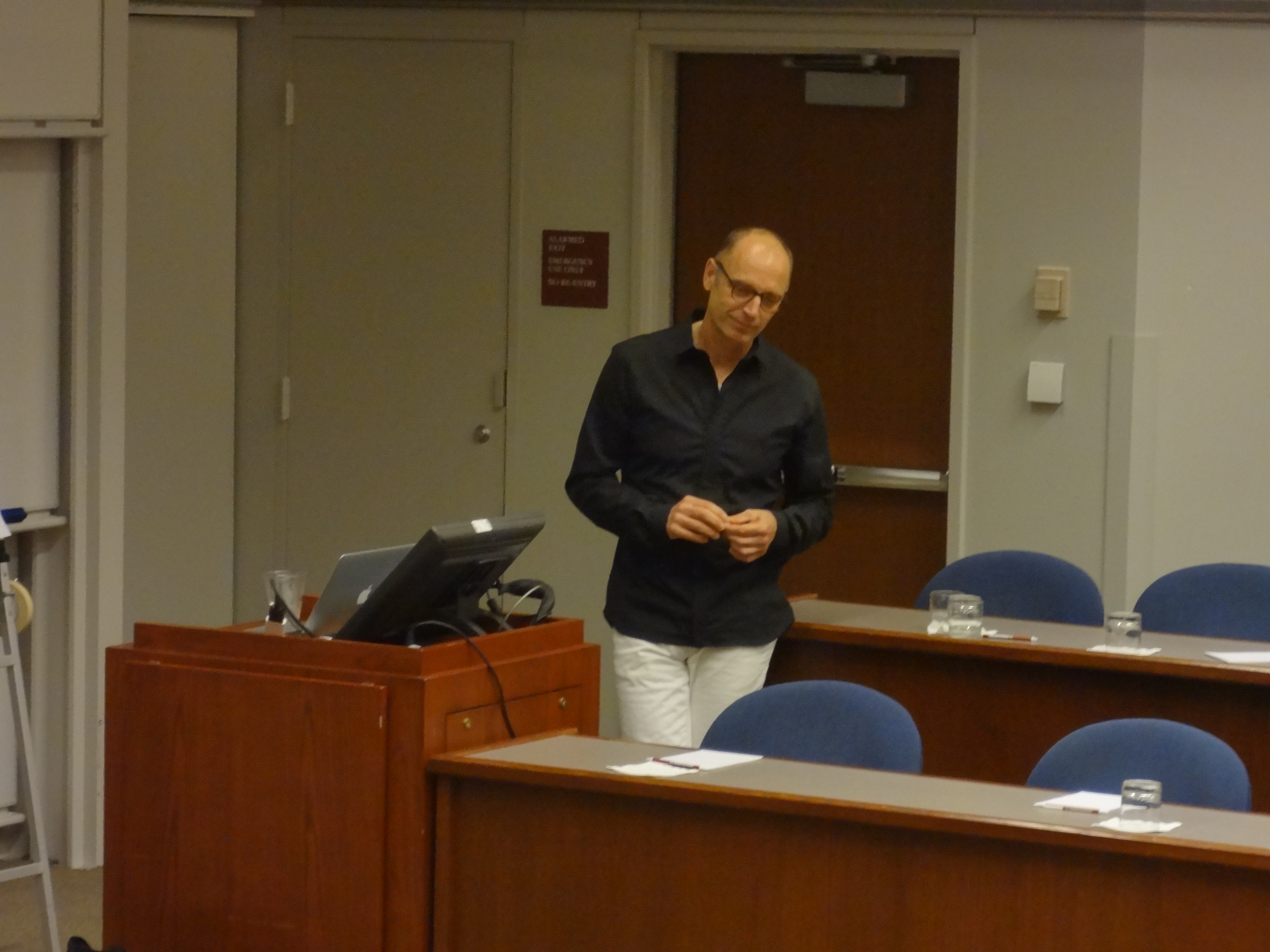 Simons told our students that for every dilemma, such as stuck wheel that makes a vulnerable person feel even more helpless, there is a solution that can be found through design. Designers make the world we live in and with, and designers are the ones who envision possible futures.

So how do design disasters happen? Because we don’t bring people into the design process. Take doors for example. Push. Pull. Should be simple, right, because every designer knows that doors open out. Not true. Simons watched 500 designers push and pull on doors, and only 32 got it right.

How can designers discover solutions before their designs are put into play? Through storytelling. Not just watching what happens, but by becoming an integral part of the action. Simons spoke of the designer who was extremely proud of his design for a hospital emergency room and physical therapy area—until he took part in a simulation in which he was treated for a broken leg. He waited, his leg was casted, he was given a wheelchair, he went to physical therapy—for four days he lived as someone with a broken leg. He lived the story, and it changed his view of his design immensely. Stories bond data to emotion. Stories build cohesion. Stories can be fun. And stories lead to solutions. 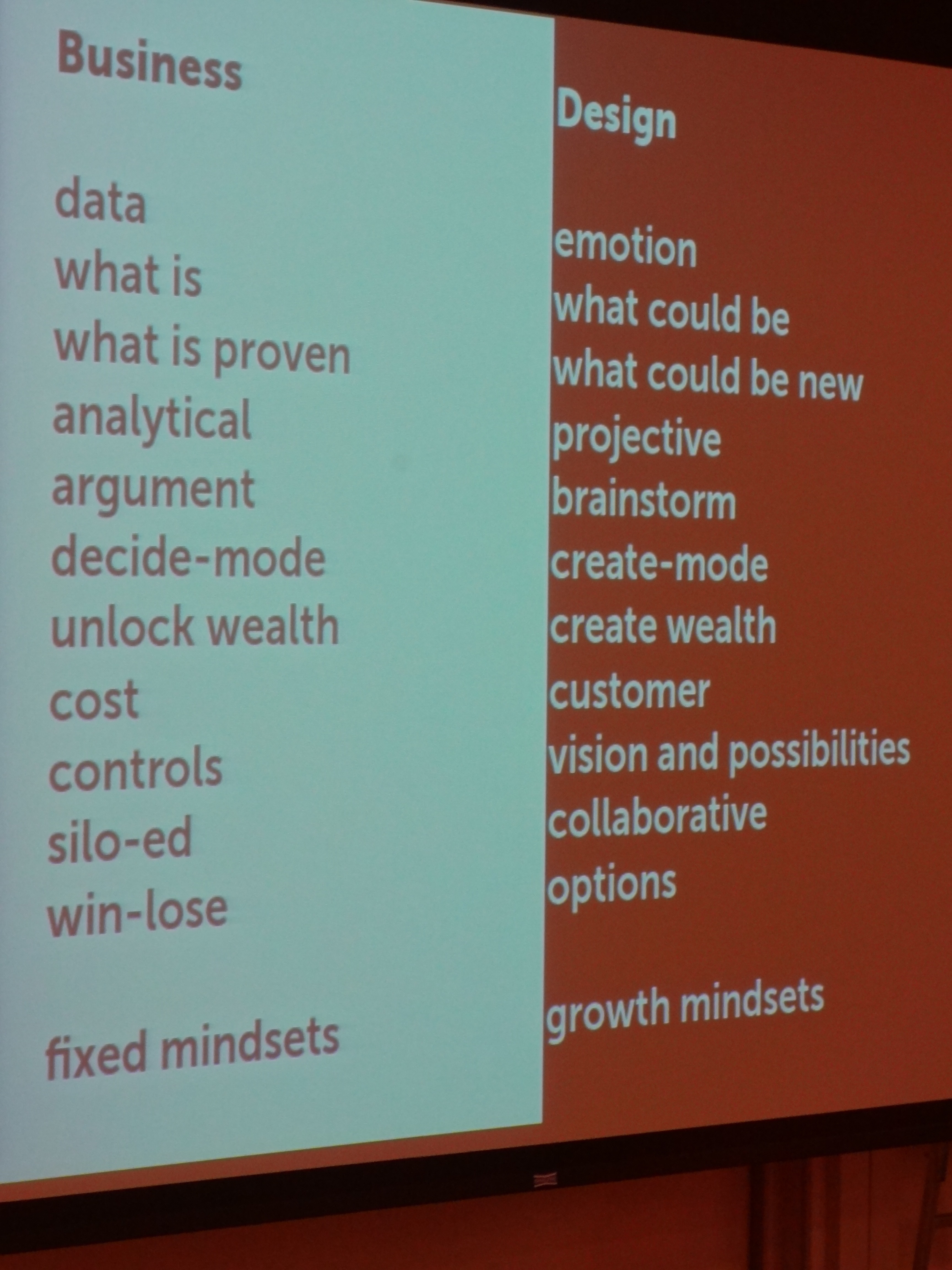 George challenged our students to go into the world and live in the gap between research, business and design. To bring all three disciplines together to work as a team. To immerse themselves in the problem, and to call upon everyone to help find the solution. To think quickly and use materials at hand to build prototypes to help envision the problem. Simons concluded, “The possibilities for reinvention are all around us, so use your gift with passion, use it wisely, and just watch and listen for opportunity for design to make the world a better place.”