Designing a Better Future for Flint

In this guest blog, 2018 Collaborative Design graduate Maggie Henderson shares her experience helping launch two new initiatives focused on giving the embattled city of Flint, Michigan a new life through design and entrepreneurship. Those initiatives— the Flint Ferris Wheel co-working space and the nonprofit startup incubator 100K Ideas—recently earned Henderson and her partners on the project a National Development Council (NDC) Academy Award in the category of Innovative Project Financing.

Held every other year, the NDC Academy is an event uniting local non-profit and governmental development professionals in an exploration of how to maximize the value of federal, state, and local finance tools to build stronger communities. Event attendees have opportunities to network, attend educational sessions, listen to guest speakers, and learn about initiatives that have been named finalists for NDC Academy Awards, which recognize high-impact projects that create economic and social opportunities in the most under-served communities in the United States.


What is the first thing that comes to mind when you think of Flint, Michigan? Is it lethal drinking water? “Murder Capital” of America? Unemployment rates? Abandoned buildings?

Believe it or not, the city formerly known as Vehicle City was once a haven for working class families seeking a better life. The Flint of yesterday was filled with a sense of hope that stands in stark contrast to the bleak reality and even bleaker perception of the city today. About a year ago, I was given the opportunity to help change that. And in turn, that opportunity changed my life.

After landing a summer job with Flint-based venture capital firm Skypoint Ventures in May of 2017, I spent the next three months working alongside 11 other college students studying business, engineering, and design at places all over the country, from the University of Michigan to Georgetown University and all the way to the University of California Berkeley. Our challenge: to develop and test a service model for two new initiatives—the Flint Ferris Wheel co-working space and the nonprofit startup incubator 100K Ideas—aimed at transforming Flint into a hub for design and entrepreneurship. 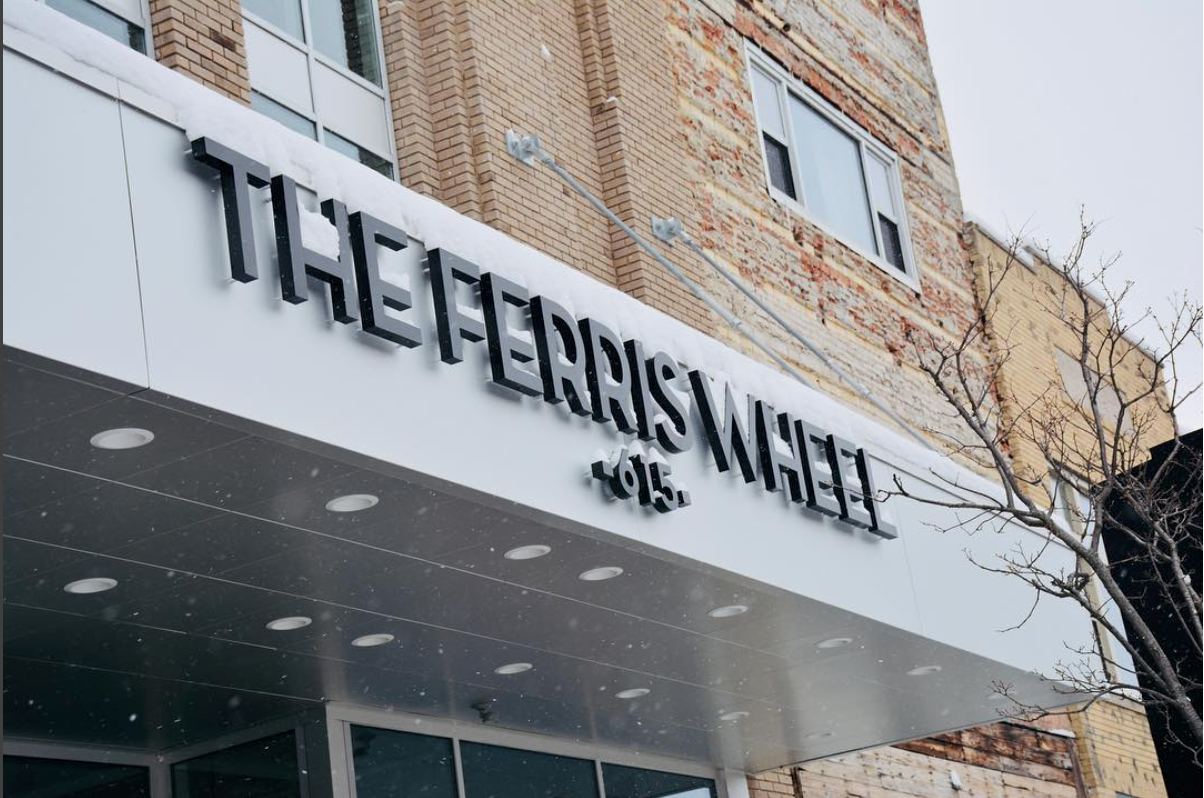 The KCAD Collaborative Design program has shaped me into a strong believer in an empathic approach to design. It’s taught me to seek to understand the perspectives of others, to persevere in the face of ambiguity, and that collaboration leads to innovation. This same ideology informed the process my fellow students and I went through to ensure a successful launch for the Flint Ferris Wheel and 100K Ideas.

The service model for 100k Ideas works like this: during initial meetings with our potential clients (free for the first hour), they would pitch us their idea for a product, service, or software, whether it was just in their heads, sketched out, or fully prototyped. We would then sit and benchmark any other similar ideas that already existed. 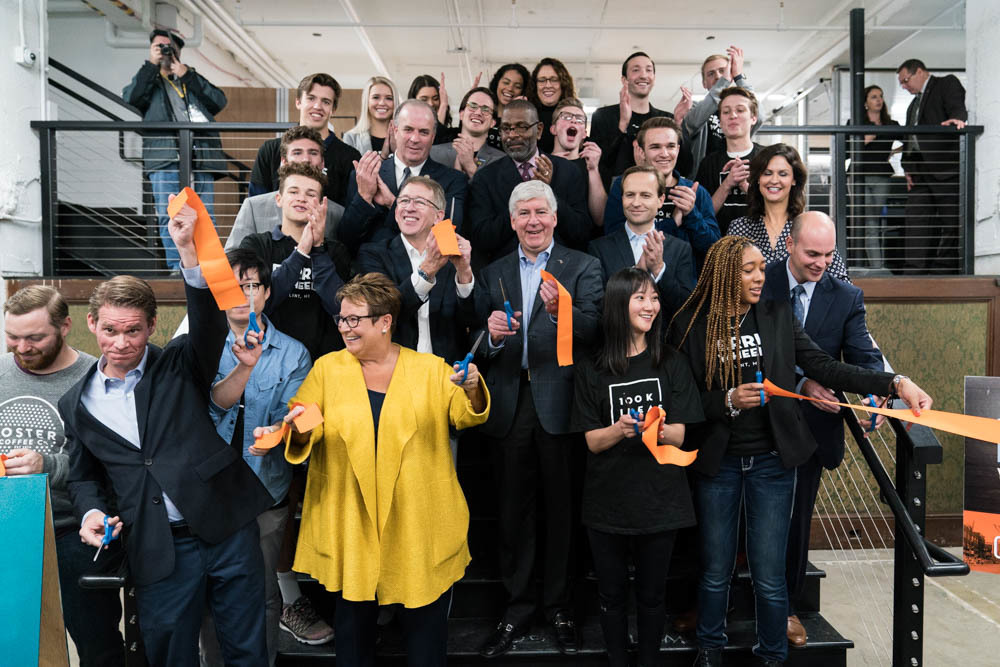 (above and below): The grand opening ceremony for the Flint Ferris Wheel and 100K Ideas drew high-profile attendees like Michigan Governor Rick Snyder, Lieutenant Governor Brian Calley, U.S. Congressman Dan Kildee, and University of Michigan–Flint Chancellor Susan E. Borrego, among many others (images courtesy of the Michigan Economic Development Corporation) 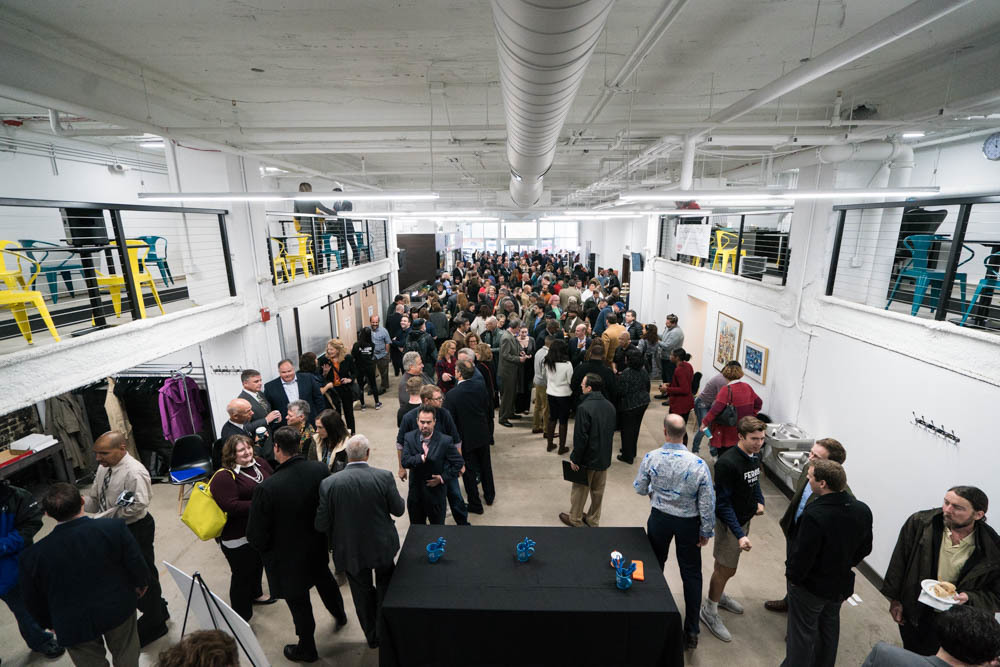 If we found that something strikingly similar was already on the market, we would encourage them to pursue another idea. If a client’s idea had strength and originality, however, they had the opportunity to take the next step using in-depth research and market validation or dissension compiled by our staff. If the client was ready to take a step further, we offered additional assistance in the thinking, making, and marketing of their idea. 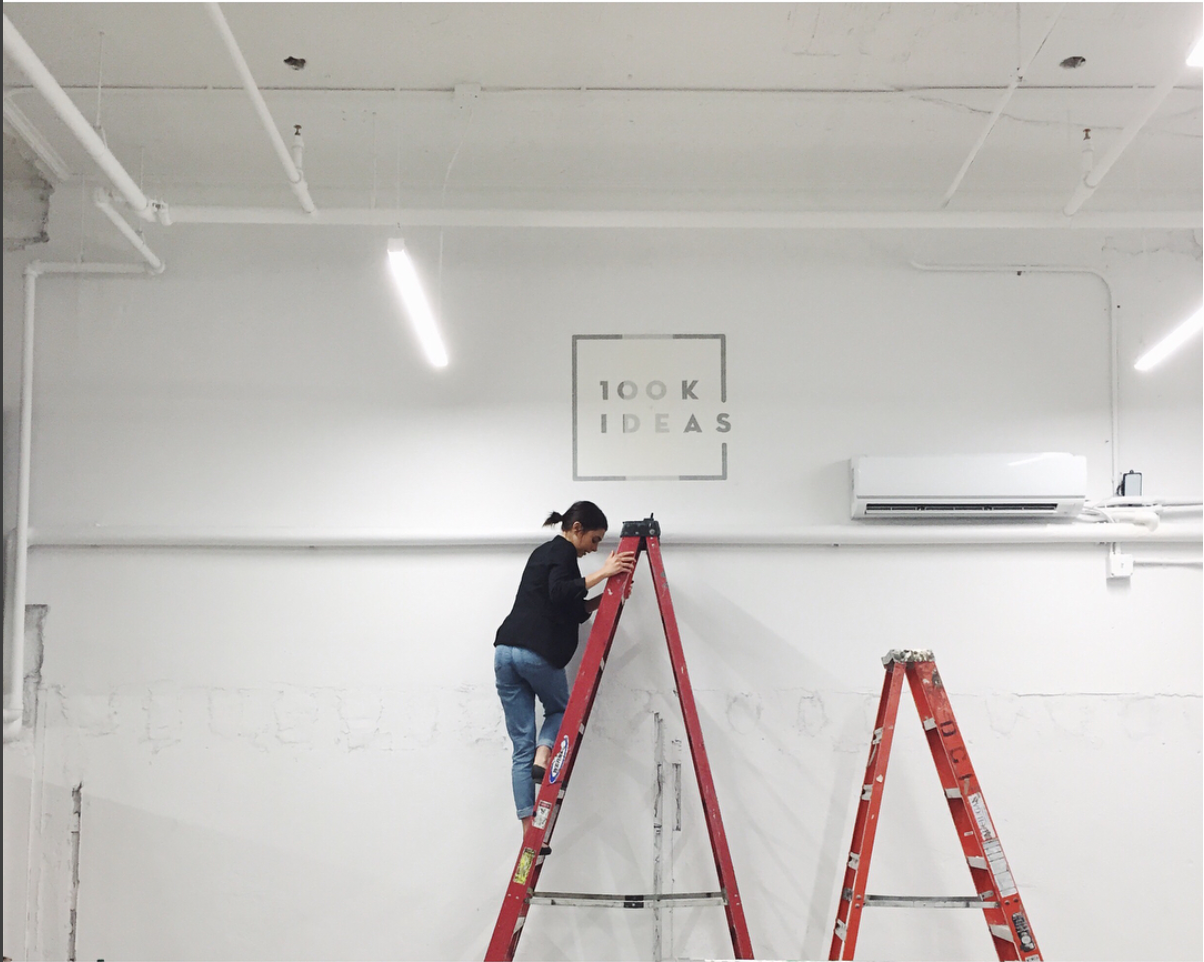 Within the context of the Flint Ferris Wheel co-working space, equipped with working professionals and a multifaceted team of college students, the 100K Ideas service model does a number of things. First, it offers accessibility to innovation because anyone can walk through the revolving front door with an idea they wish to bring to fruition and be treated with respect, which is, quite frankly, a revolutionary concept in the business and innovation world. Second, with the generation of new ideas comes new manufacturing opportunities, opportunities that are inevitably close to where those ideas happen.

One of the many things that I learned from this experience is that in order to invest in design and innovation, you have to invest in manufacturing.  By doing that, 100K Ideas and the Flint Ferris Wheel are paving the way for sustainable economic growth for the Flint community. Situated right next to the very office building where, over 100 years ago, Billy Durant started General Motors, these catalysts for entrepreneurship will help reignite the spark of ingenuity and forward thinking that defined Flint during its heyday as an epicenter of automotive manufacturing.

These initiatives will also continue to augment a workforce of college students with new skills, giving them paid opportunities to supplement their education with real world experiences and empowering them to make meaningful contributions to society. Personally, I felt genuinely valued for my contributions to the team, and I am still so grateful for having had the opportunity to be a part of a project that will have a lasting impact for years to come.

A few months after I left to return back to school for the fall 2017 semester, I learned that the Flint Ferris Wheel and 100K Ideas had been named one of two finalists for a National Development Council Academy Award. I immediately jumped at the opportunity to attend the award ceremony in October with my coworkers. Before long, I was headed to our nation’s capital, where I learned we would have to convince other attendees at the ceremony to vote for our project in order to win. Armed with branded t-shirts, hundreds of brochures, and sweets, we set out to engage everyone we could. 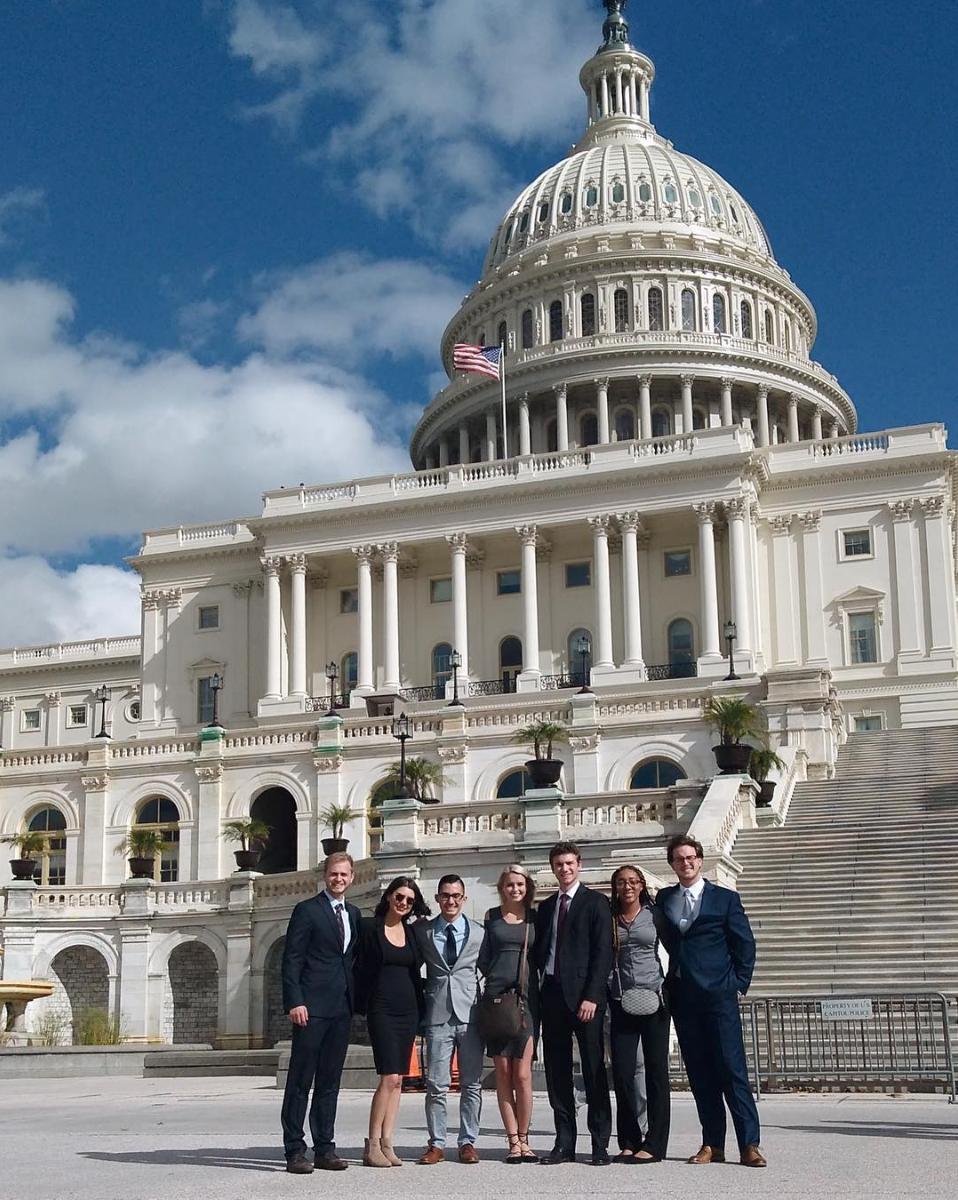 The seven of us covered a lot of territory throughout the course of those three days, and we learned a lot through presentations on economic development, networking sessions, and of course, the awards ceremony itself. The other initiative named a finalist in the Innovative Project Financing category —the New York Economic Development Corporation-led redevelopment of the historic Kings Theatre, spurring economic and community growth in Brooklyn—was formidable but in the end, the depth of our narrative won out. 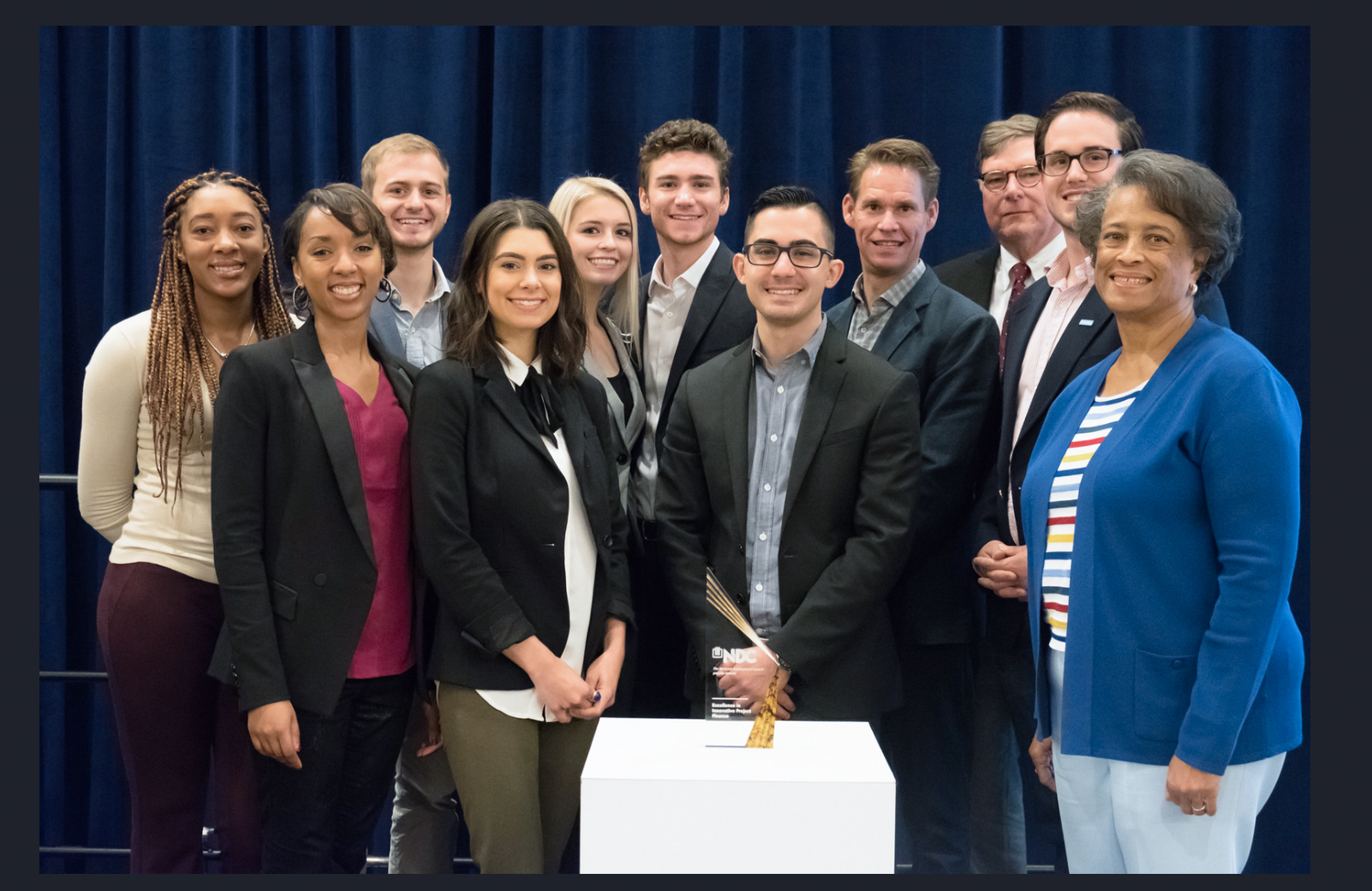 Winning was more than just a testament to the hard work that we all put in over the course of the summer; it meant that we were successful in starting to change the world’s perception of Flint. Or, better yet, we were empowering Flint to change those perceptions itself.

The reinforcement of the entrepreneurial, innovative spirit that will emanate from the ecosystem we helped create will be the ladder toward renewed economic prosperity, one that is deep-rooted and far-reaching.