Designing the branding for one of the world’s largest and most open-ended art events is a massive undertaking, even more so when you’re tackling the job for the second year in a row and expectations of innovation are looming large.

Such is life for Kendall College of Art and Design of Ferris State University (KCAD) alumnus John O’Neill (’01, Graphic Design), head of Grand Rapids-based design firm Conduit Studio, and his colleagues, who won the bid to brand ArtPrize for 2016. But make no mistake—life for this design team is good. 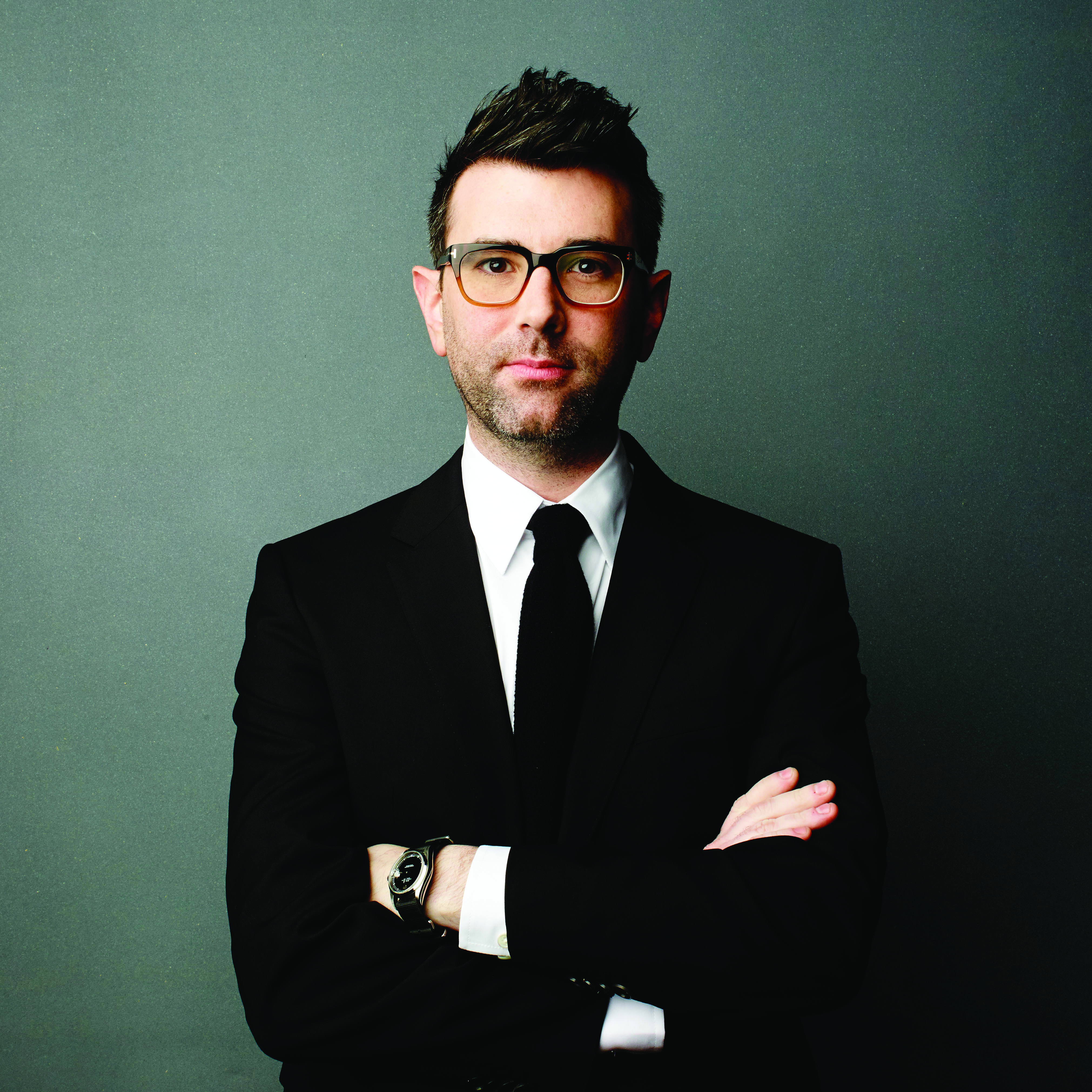 “The visual design definitely affects the ArtPrize experience and helps shape the dialogue, so we’re proud and excited to be a part of that,” says O’Neill. “Last year, we felt that our branding helped raise the dialogue around the different neighborhoods ArtPrize encompasses, and it was interesting to hear how that had an impact on larger conversations surrounding the event.”

This time around, Conduit’s initial discussion with ArtPrize organizers revealed a desire to change the way people interact with the event.

“For 2016, ArtPrize really wanted to do something around changing patterns and getting people out of the habit of going to the same venues. They wanted the branding to encourage visitors to venture out into new, unexplored territory,” says O’Neill.

In the early stages of the design process, the Conduit team focused on propelling the elements of growth and education ArtPrize has always encouraged. The resulting branding for ArtPrize Eight foregoes the central poster image that’s been a standard of years past in favor of more interactive pieces, such as a perforated poster that can be taken apart and reassembled and an app that lets users design their own digital poster. 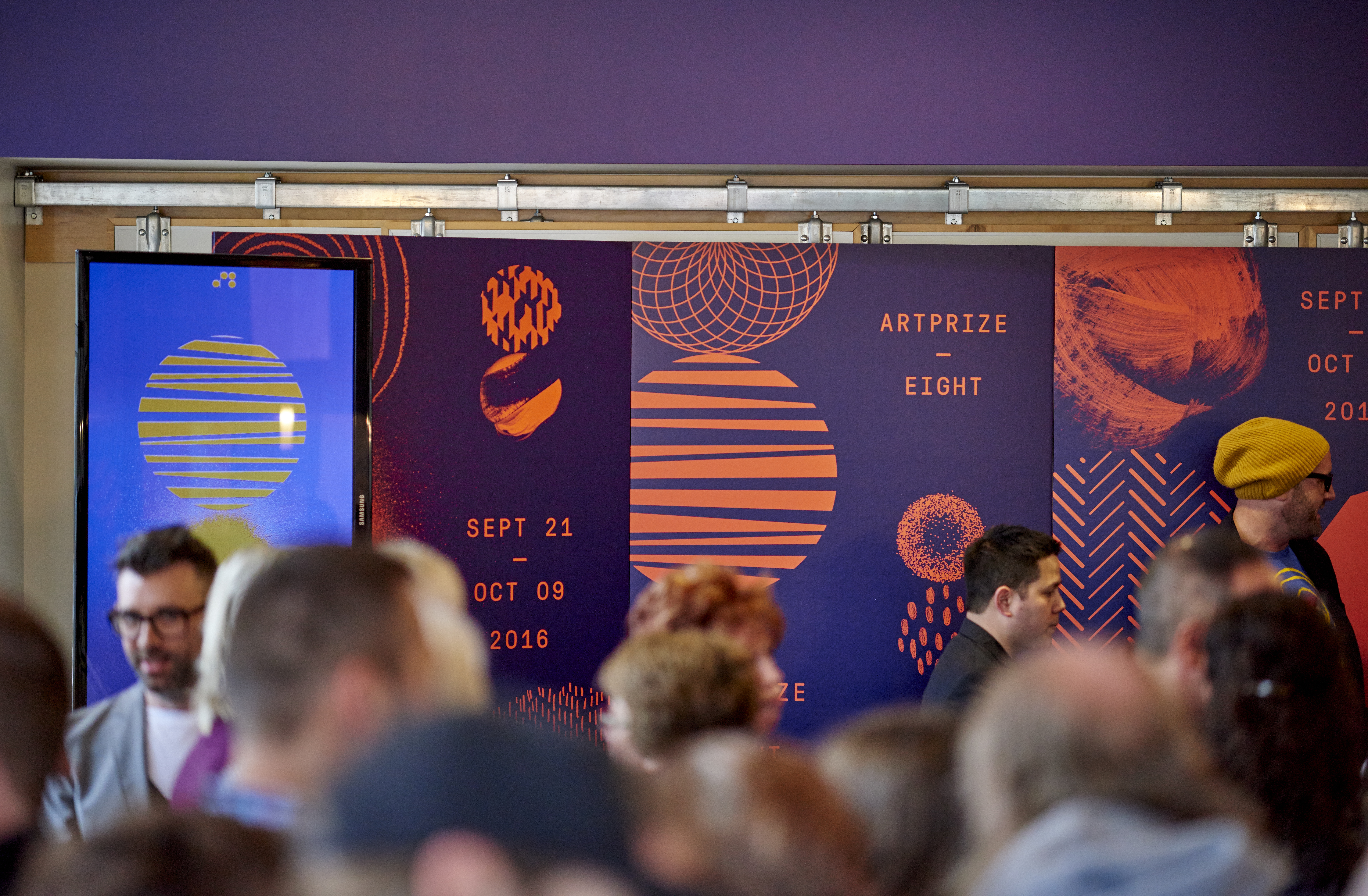 The app, which Conduit designed and built entirely in-house, gives users the ability to discover which visual elements complement one another and which contrast by experimenting with different textures, colors, and scales through an easy-to-use, swipe-driven interface.

“We ended up developing 52 shapes, one for every letter of the alphabet, upper and lower case. It almost became its own language, its own immediate alphabet,” says O’Neill. “You’re able to interact with this existing imagery and add color to create something that’s aesthetically pleasing to you.”

Similarly, the physical poster features a number of different colors, patterns, and images that viewers can disassemble and rearrange to suit their own taste. O’Neill and his colleagues were inspired by the collage-like wheat paste poster walls that have become a fixture in New York City’s SoHo neighborhood, perfect examples of how existing images can take on entirely new meanings when altered and combined with other images. 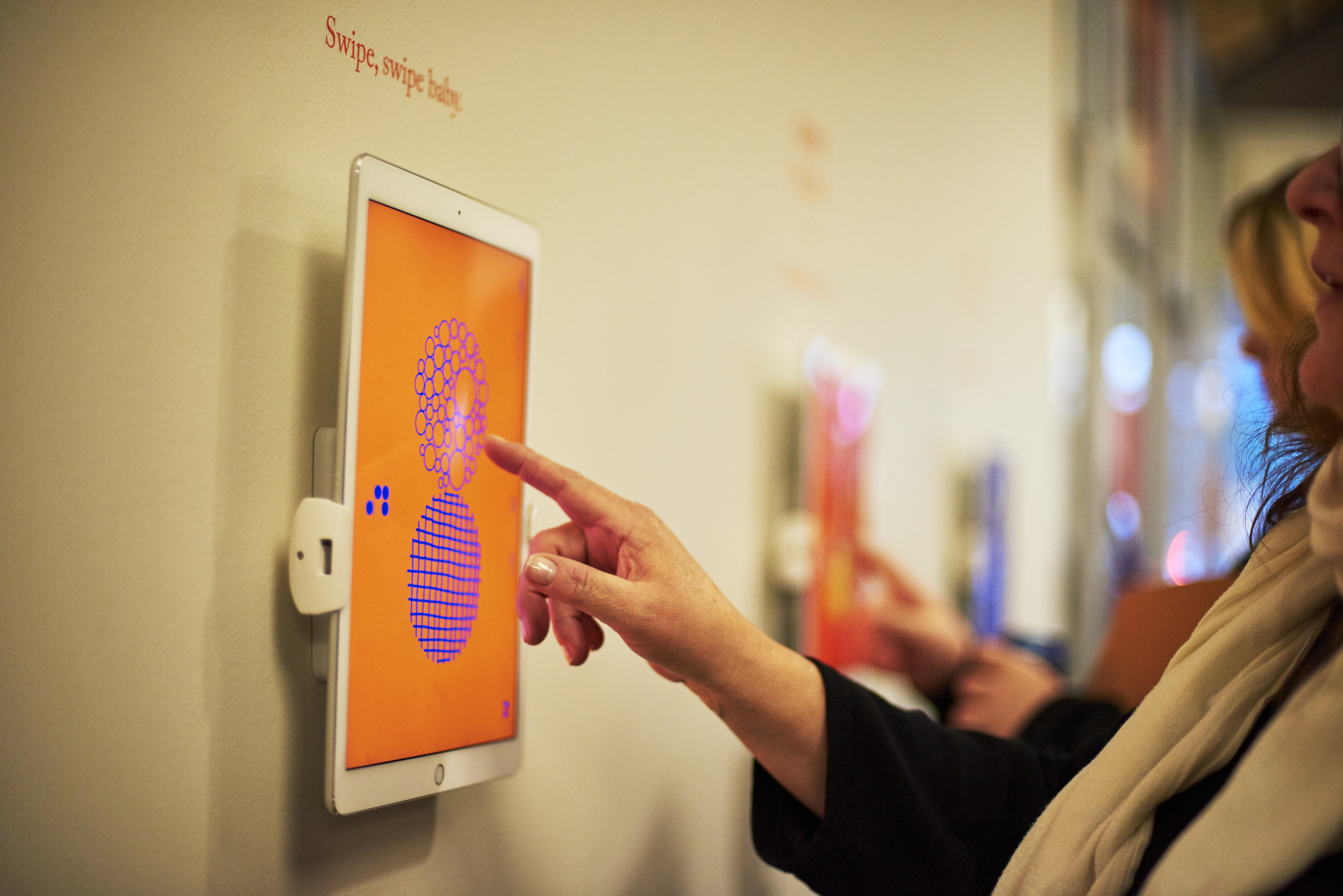 “Thinking about what you’re seeing and beginning to verbalize why you like or don’t like what you’re seeing has always been an important component of the larger dialogue of ArtPrize. With these pieces, anyone can find an aesthetic they love and then find another aesthetic that contrasts in an interesting way. Even though it’s a very simple exercise, it does encourage people to become more visually literate so they can effectively communicate the reasoning behind their reactions to works of art.” 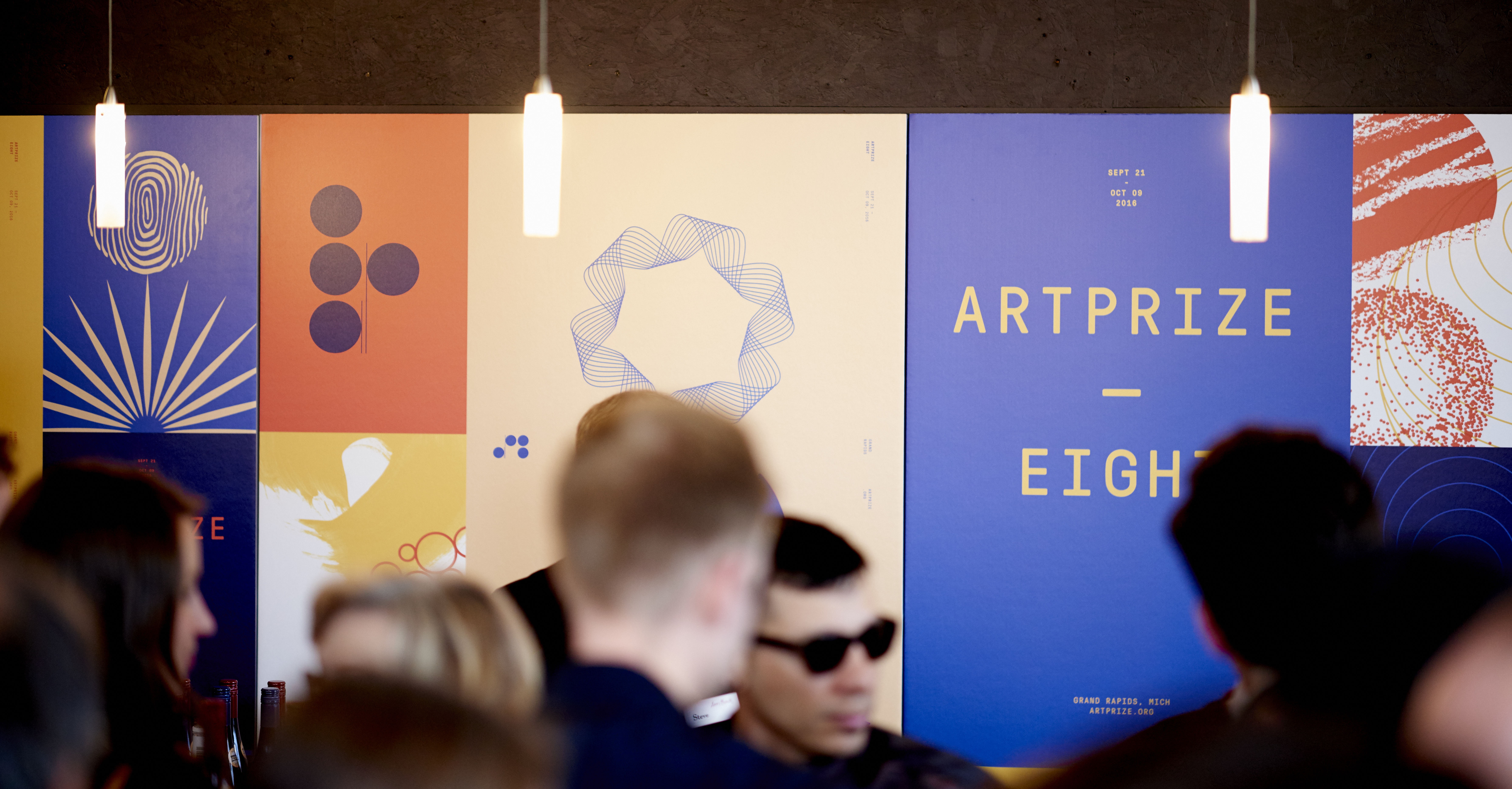 The second focus of Conduit’s branding strategy—highlighting the stature of ArtPrize—came out of a research trip O’Neill took to Art Basel in Miami this past December. Held three times each year in Miami, Hong Kong, and Basel, Switzerland, the international art fair consistently draws tens of thousands of visitors and has long set the bar for large-scale public art events since its inception in 1970.

O’Neill and members of the ArtPrize team viewed Art Basel from an event design perspective, observing how the event’s immersive atmosphere fostered dynamic interactions between viewers, artists, and artworks and made everyone involved feel part of something truly special.

“We asked ourselves, ‘What can we learn from these places that have been doing this for 40 years and apply it to our rather young event here in Grand Rapids’?” O’Neill says. “Art Basel Miami was not afraid to bill itself as the greatest event on earth. ArtPrize brings in some of the greatest jurors from the art world and has developed curator and venue grant programs that give rise to some incredible exhibitions, and we agreed that we really wanted to do more to bring these aspects of the event to the forefront.” 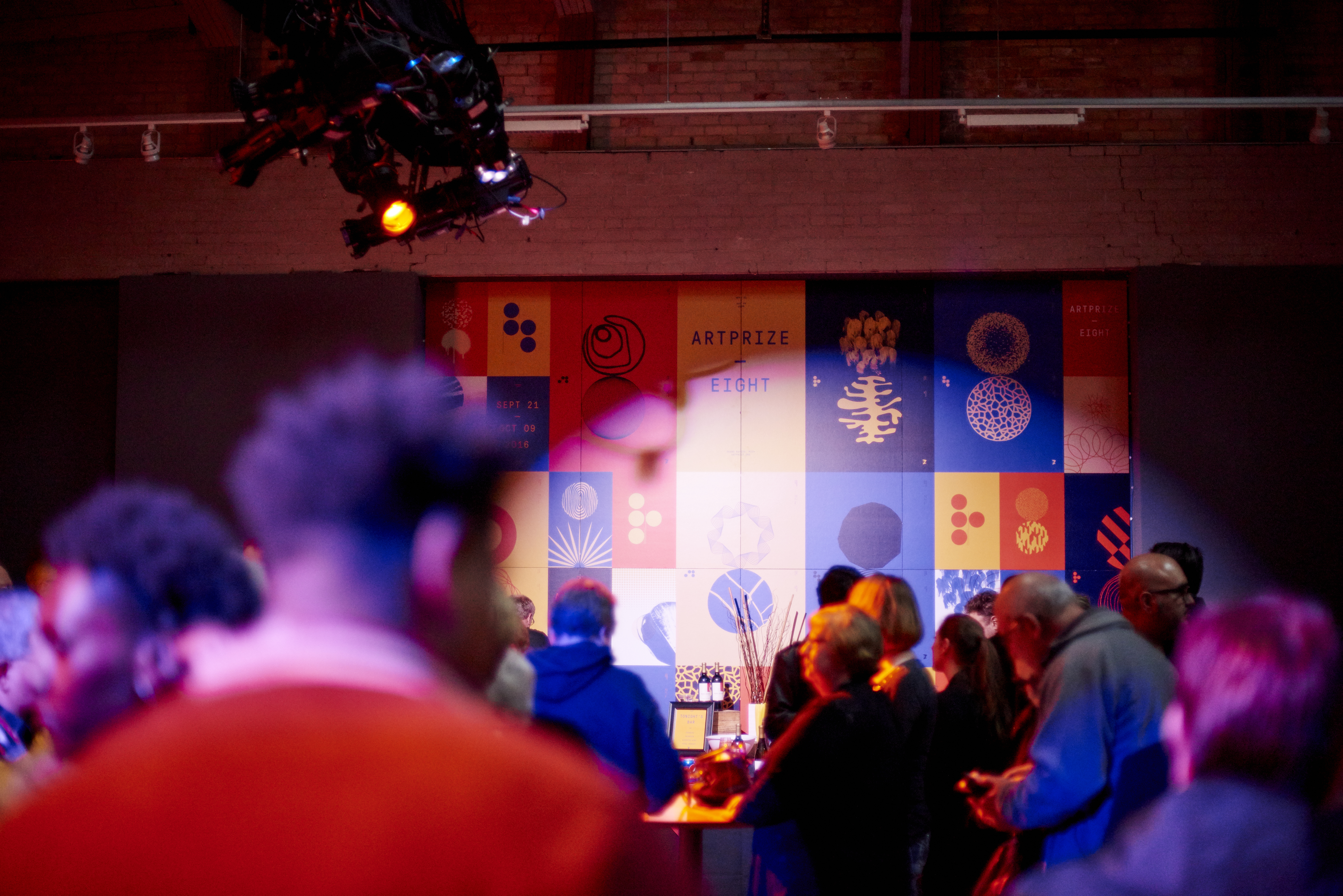 With just a few more months left until ArtPrize Eight kicks off, O’Neill and his team have now turned their attention to integrating the branding they’ve developed into the event’s entire visitor experience, from signage to retail to educational events and beyond.

“We’re exploring a lot of different options in terms of how the branding will fully express itself,” says O’Neill. “If nothing else, it gives us a really big palette to work with.”


See more work from Conduit Studio at conduitstudio.com, and stay up-to-date on the latest ArtPrize Eight developments at artprize.org.