Probably one of the most entertaining events of the year, the Distinguished Alumni Awards ceremony and dinner were held May 3 at the Grand Rapids Art Museum. It’s always a chance for alumni and faculty to reconnect and swap stories. (To see video bios of each recipient, click the links.) 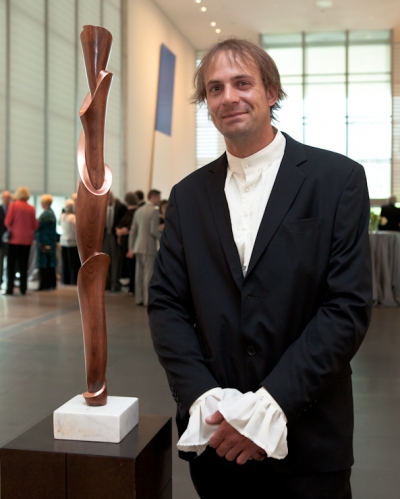 This year’s award was created by Industrial Design alum John Warner. A graceful meld of stone and metal, Warner used Perlato marble from a quarry in Italy, and stainless steel left over from another piece. (That’s not the award above, but one of John’s amazing pieces.) 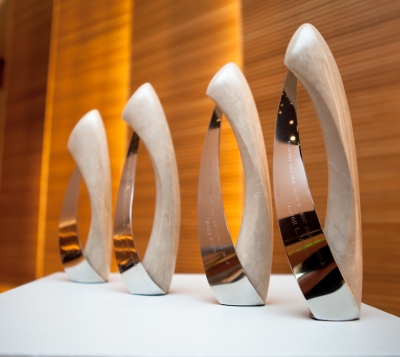 Recent Graduate Award winner John O’Neill was introduced by friend Matt Sova, who had the audience laughing at his description of an annual fabulous yard sale the two put on, that happens to feature a runway fashion show, which is only appropriate, since Sova manages local men’s store A.K. Rikk’s. And it just so happens that the store was O’Neill’s first client—while he was in high school! John was obviously choked up in accepting his award, thanking the faculty and Dr. Evans, as well as his Conduit team, acknowledging that their success is due to a combination of passion and hard work. 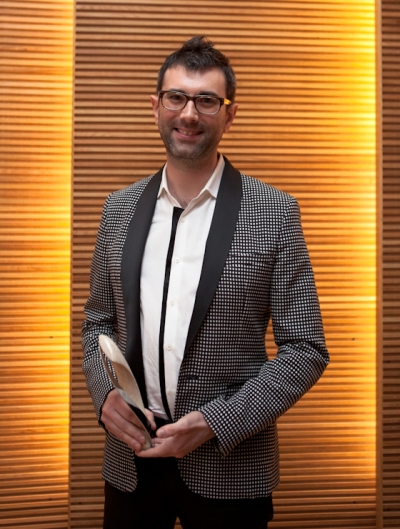 Lisa Wall received the Community Service Award. Her friend and neighbor Matinga Ragatz introduced Wall, recounting how she truly “walks the walk.” Wall and her husband bought the worst house on the block, and over a period of just a few months, transformed it — and in turn, her neighborhood. Wall expressed her gratitude for the opportunity she has had to take her interior design skills and apply them to an unmet need: affordable housing. “I owe much of my professional success to this school,” she said. 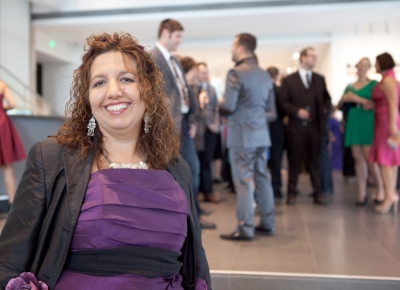 Shelly Klein’s sister, Kim, had us all in stitches (pun intended) as she recounted her little sister’s childhood, telling us that she was an awkward child, small, painfully shy, and prone to tears at nearly every turn. “But when Shelly started creating art in high school, she became a force, and as Shelly grew, becoming more confident, outspoken and successful, her art became more spectacular,” said Kim. Klein’s husband acknowledged that his wife received recognition for her work outside of Grand Rapids before her hometown gave Klein her due. “I love coming home every day and seeing what she is capable of,” he said. Upon accepting her Distinguished Alumni Award, Klein said she is moved every time that someone likes her work enough to buy it. She thanked her family and her husband, who “almost destroyed my ability to make sad art, by making me so happy.” 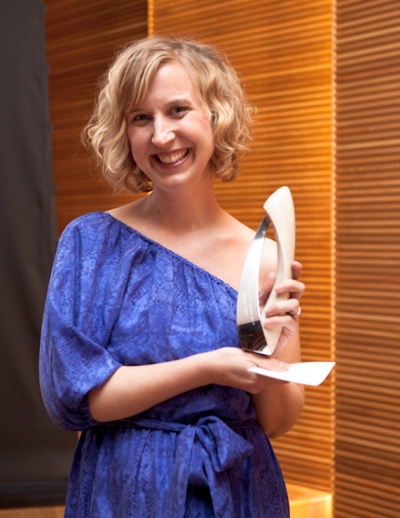 Retired Interior Design Professor and proud member of the Kendall class of 1967 Mary Laham had the honor of introducing classmate and Lifetime Achievement recipient Darrell Wight. In 2010, Laham retired from teaching at Kendall, and a brief story was included in the Kendall Portfolio magazine. Wight saw the story, and decided to send her an e-mail. Of course Laham asked Wight what he had been up to. He responded, "Please 'Google' me." “O.M.G.” said Laham, “He’s worked on over 36 feature films and numerous TV shows as a set designer and assistant art director. He also had his own business designing commercial, residential and healthcare facilities.” Wight received a standing ovation from the audience that included several classmates, as well as family members. In fact, Wight’s brother was at the ready with a handkerchief when Wight seemed to get a little misty-eyed. 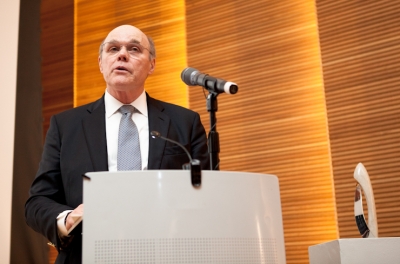 Dr. Evans concluded the evening by noting that the awards are an opportunity to celebrate the remarkable and diverse achievements of each recipient. He also made a wonderful announcement: John O’Neill has created the Conduit scholarship, so that students have the opportunity to study abroad and enjoy the same life-changing experience that he had. Thanks, John! 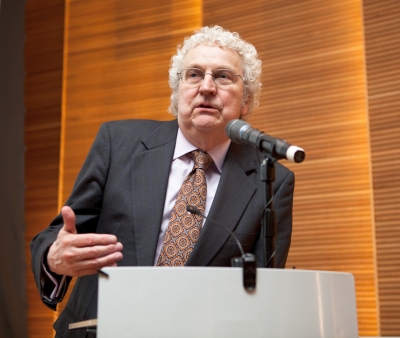