Kendall student Wes Keely is a junior in the Industrial Design program. He recently received funding from Start Garden for a product he designed. Keely describes his experience with KBrakes below. 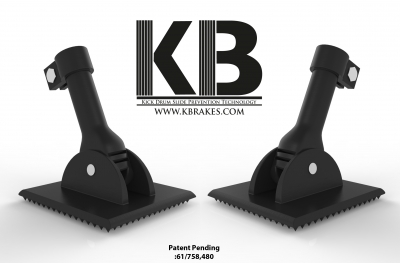 What are KBrakes?
KBrakes are an anchoring system for a kick drum (on a drum set) that keeps the drum in place while it’s being played. The kick drum is the biggest drum and sits on the floor and is played by pressing down on a foot pedal that is attached to the back drum hoop. By pressing down on the pedal it pushes the beater forward causing the beater to strike the head of the drum, making a very low but loud bass tone.

The problem: Kick drums slide forward and away from the drummer as they are being played. Even though 99% of drums are played on carpet this still happens. There are two anchored spikes on the spurs (legs) that come on every kick drum that are meant to anchor and stabilize the drum. Even on the best carpet sometimes the kick drum will still creep, walk or slide forward.

The Solution: Design a kick drum anchoring system that works.
A few years ago I was on US tour with a band from Virginia that had hired me to drum on some dates with them. Most of this tour was a package tour, which means that there were four bands that all played the same shows together every night. All of the drummers would usually load in the club and set up our drum kits. Part of my kit setup consisted of a “gig rug,” which is basically a rug for your drums with a carpeted 2X4 at the end to keep the kick drum from sliding away.

My band was playing first on this tour. After a few days of the other drummer’s kick drums sliding around, every drummer on the tour started asking to use my rug. Of course I said yes, because I didn’t mind, but there was a major drawback to this decision: usually after we played I would pack all my stuff up into my cases and get ready for load-out at the end of the night. I now was the last one to be packed up because my rug, which went into the bottom of my road case, was still on stage at 12:00 am while the drummer who played last was talking to people and hanging out at the bar and his drums were still on stage on top of my rug.

I remember sitting in the car with my fiancée in Lansing after we had finished playing. We wanted to leave right after we were done playing to go back home. I told her that we had to wait until the end of the show because the other drummers were using my rug and if I don’t pack it up myself, I won’t know if it will be there tomorrow. I just couldn’t chance it getting left behind. As we sat there I started thinking about all the other drum anchoring systems and how poorly they worked. If I came up with something myself, I would never have to wait for my drum rug again. After mentally scrolling through all the things that drummers currently used to solve this problem (cinder blocks, Velcro, tape, rope, etc.), I came up with the idea that became KBrakes. This would be a drum anchor that goes on the end of the spurs of your kick drum and has feet that wouldn’t create drag, but almost creates resistance and pushes the drum back toward the player. I thought this would be great because one of the guys on the tour was playing with no rubber feet at all, just spikes, and his drum was still sliding all over the place. 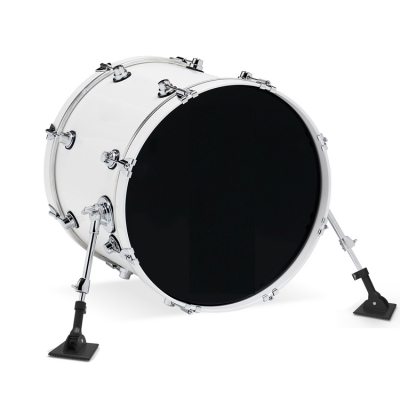 I started designing this idea in my head, over and over and over again. I started secretly plugging away doing research and polling other drummers on the tour with questions about anchors and drums sliding. Eventually tour was over and I came home and started working on this new project. After a few sketches on napkins, I started working in Rhino to bring this to life. After about a month I had prototype, after about 6 months I had 4 prototypes. The ideas and new considerations just kept coming out. This project was very much about iteration and reiteration to arrive where I am currently which is a patent pending version 9. There isn’t much flash to Kbrakes, it’s all about function.

A month or so ago I made a video to show the music community my solution to this problem. I decided to push it further and uploaded it to Start Garden to see what others thought. About 6 days later KBrakes was funded with $5,000 from Start Garden.


I’m really excited to share Kbrakes with the world and show the drummers of the world that there is at least one good option for keeping their kick drum in front of them. We have gotten preorders and inquiries from a number of people in the US and as of yesterday Austria and Japan.

Meet Wes and Kbrakes at Kendall on April 18! Click for event details.

If you would like more information about Kbrakes please check out the website and your favorite social media sites: