For students in Kendall College of Art and Design of Ferris State University’s (KCAD) Pamella Roland DeVos School of Fashion, understanding how to carve out a career in the fashion industry is just as important as honing the technical and creative tools of the trade. So when Adam Lippes, one of the hottest designers on the runway, paid a visit to campus recently, the students were quick to put down their fabrics and perk up their ears. 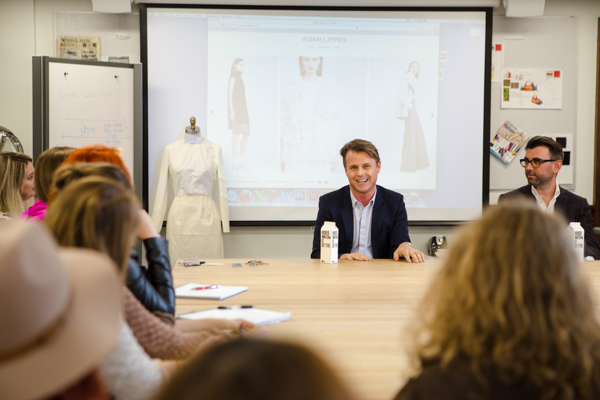 Lippes, who spoke to a packed classroom before giving an evening presentation (sponsored by the KCAD Alumni Association and AIGA West Michigan) in the Woodbridge N. Ferris Building, didn’t have the same support systems and educational resources that students in the Fashion Studies program do, but he was quick to tell students that, regardless of education, succeeding in the fashion industry requires dedication and a willingness to take risks.

“I hear a lot of ‘that’s below me,’” he told the students when referencing his entry into the fashion industry. “But the truth is there’s nothing below anybody.”

Lippes and ADAM recently announced a highly touted collaboration with Target retail stores, but he didn’t get there overnight. After paying his dues in retail, Lippes made a few connections that earned him a job at Polo Ralph Lauren. Before long, his network had expanded and he was offered a position with Oscar de la Renta, where he quickly made a lasting impression his first day on the job by taking the seat next to his boss during a lunch meeting – something that normally happened by invite only.

“He just looked at me like, ‘Who are you?’ But we had a great conversation and I really made an impression on him,” Lippes recalled.

From there, Lippes further grabbed the influential elder designer’s attention by spontaneously designing the interior layout of a boutique de la Renta was planning to open in Paris without being asked to. After researching de la Renta’s personal tastes, Lippes sought a meeting with him and presented his ideas, which de la Renta accepted on the spot.

“I made this board and marched in there and I’m like ‘Hey, I really think your store in Paris should look like this, what do you think?’ And he asks ‘Do you speak French?’ I fumbled around with it enough that he thought I spoke more than I did, but he said ‘I love it. I love that idea,’” Lippes recalled. 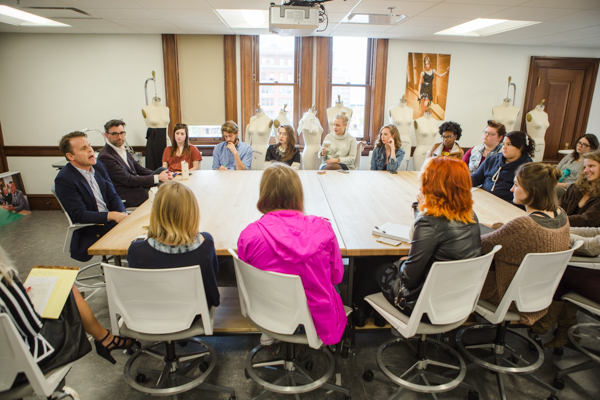 Moving up through the ranks, Lippes became one of the youngest global creative directors in the industry, working with de la Renta personally on everything from shows to store design to marketing and development. Inevitably, the time came when Lippes could no longer ignore his desire to branch out and create his own brand. In 2003, Lippes left to create ADAM, which began as a basic line of t-shirts and underwear.

Now, Lippes has expanded his operation to a full line of luxury lifestyle clothing. His focus is on making sure everything is impeccably designed and able to last a lifetime. Even Lippes’ website stresses his goal for the brand: “quality above all else.”

When one student asked Lippes who he designs for, he replied, “One thing we don’t design for is an age. She is 28-82; I’ve dressed them all. She understands quality. She does not care about a label but she cares about quality.”

Inevitably, the students asked Lippes how they might go about working for a major label. “If it’s an internship, call and find out,” he told them. “We hire a lot of interns into full-time positions, so it’s a good way to test the waters. But there’s a lot of competition out there, so you try to figure out a way to make yourself stand out.”

Lippes also implored the students to not be afraid to work a job they don’t love to get to the one they will love. “Don’t forget: you may not want to work at “x” designer, because that may not be your aesthetic, but just apply anyhow because you can learn and then move on.”

Stressing the importance of drive and determination, Lippes took special care to relay to the students how crucial it is to spend equal time balancing the business and creative aspects of fashion design. He was especially candid about decisions he made that didn’t work out and how to learn from them, referencing the 2010 sale of ADAM, which he was eventually able to buy back in 2012.

“I never realized how difficult it is to run your own business until I did it. If you have a hard day, you’re on your own; there’s no one to go rely on,” he said. “Fashion is a very difficult industry – very creative but very difficult. You have to constantly reinvent yourself and nothing can be the same. The business side of fashion is very difficult and you can’t discount the importance of that.” 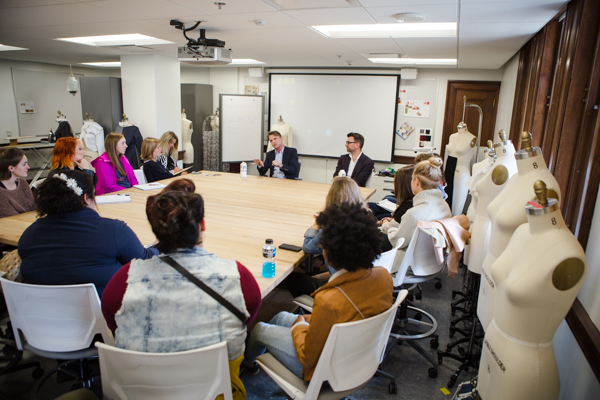 While self-motivation ultimately propelled Lippes into the world of fashion, he was quick to point out to students just how important collaboration is to succeeding in the highly competitive fashion industry. Even now, as one of the most prominent designers on the market, Lippes remains adamant that his success depends largely on the teams of people he works with.

“You may have teams that are really organizing or presenting a lot and stretching your creativity and imagination by bringing different things to the table; it’s not just a yes or no process,” he told the students.

KCAD Fashion Studies students are no strangers to collaborative projects – over the last few years they’ve worked with the Grand Rapids Ballet, Spectrum Health, and Opera Grand Rapids, among other organizations – but independent of their group work, each student has their own vision for their ideal career in the fashion industry. Realizing that vision, Lippes told them, can only start from within.

“I guess the moral of the story is make whatever you want and just go for it,” he said. “You get an idea of where you are and what you’re dreaming and what you’ve learned and don’t know and you try and figure it out.”