Matt Baldwin still has the first pair of jeans he ever designed hanging in his closet, and for good reason: without them, he’d have never made the leap from a relatively unknown boutique owner to one of the fashion industry’s hottest emerging designers.

Since launching BALDWIN Denim & Collections in Kansas City, Mo. in 2009, Baldwin has been named one of the best new menswear designers in America by GQ, partnered with The Gap on an exclusive collection that was sold throughout the world, and counts the likes of Jay-Z, Ellen DeGeneres, and Jason Sudeikis among a growing number of loyal celebrity customers. But even as he’s ascended to international notoriety, Baldwin has remained true – both personally and professionally – to an ethos of authenticity, craftsmanship, and human connection.

At a recent event, sponsored by Design West Michigan and A.K. Rikk’s and held at Kendall College of Art and Design of Ferris State University (KCAD), Baldwin shared his journey and his decidedly unconventional approach to fashion design with an audience of KCAD students, faculty, and staff as well as members of the local community. 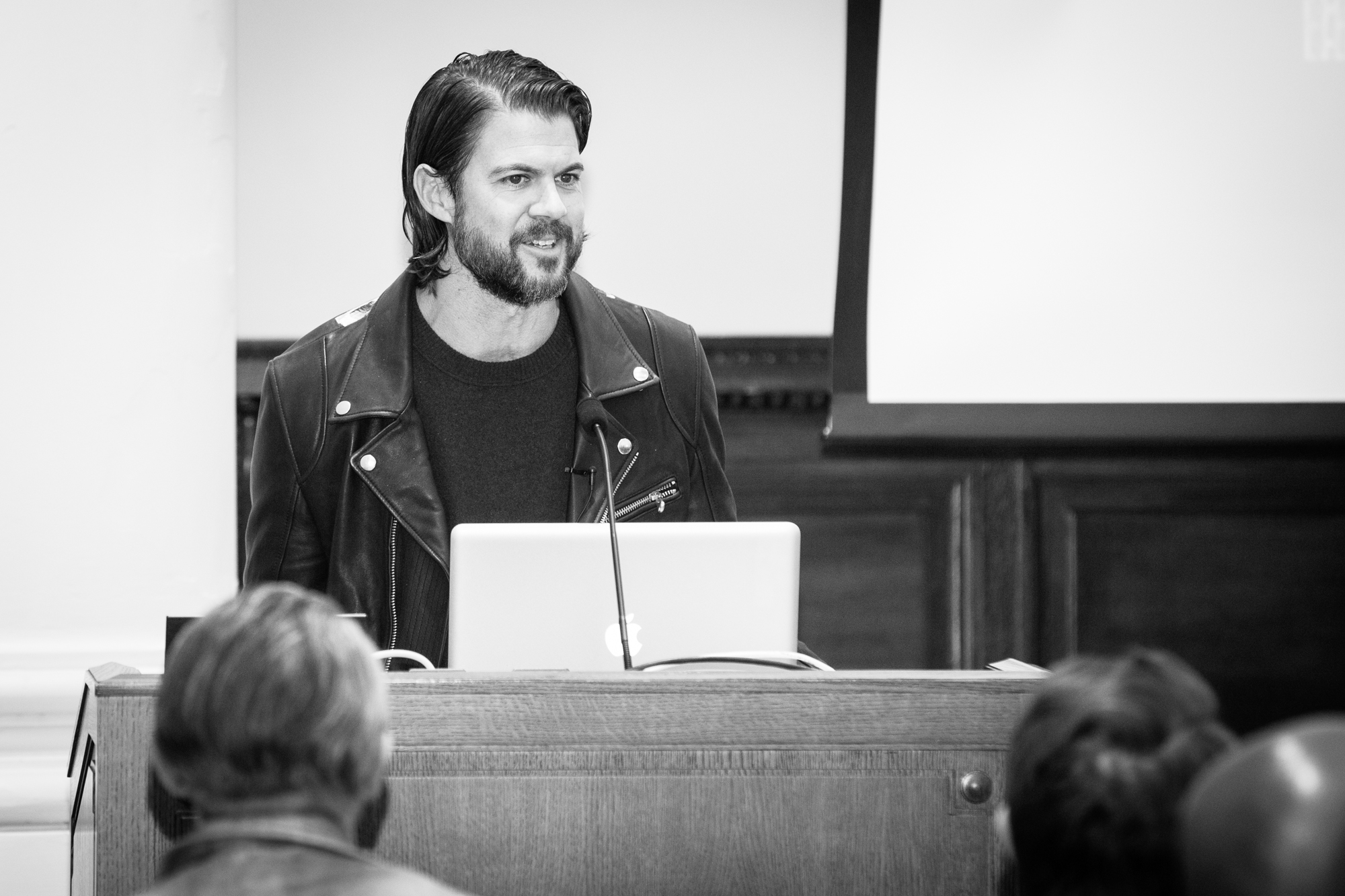 Passion and perspective are the cornerstones of Baldwin’s success. When he and his wife and business partner Emily opened their first fashion retailer, Standard Style, in Kansas City in 2003, they were told by more than a few people that the Midwest was not fertile soil for fashion entrepreneurship. They had similar doubts cast on them in 2008 when preparing to launch the BALDWIN label in the early wake of the worst economic recession since the Great Depression. But the couple had their own ideas.

“We had a lot of people telling us that [opening a fashion retail store and a fashion line] in Kansas City would never work, but we believed that it could. At any given time, you are only limited by what you believe,” Baldwin told the crowd at KCAD. 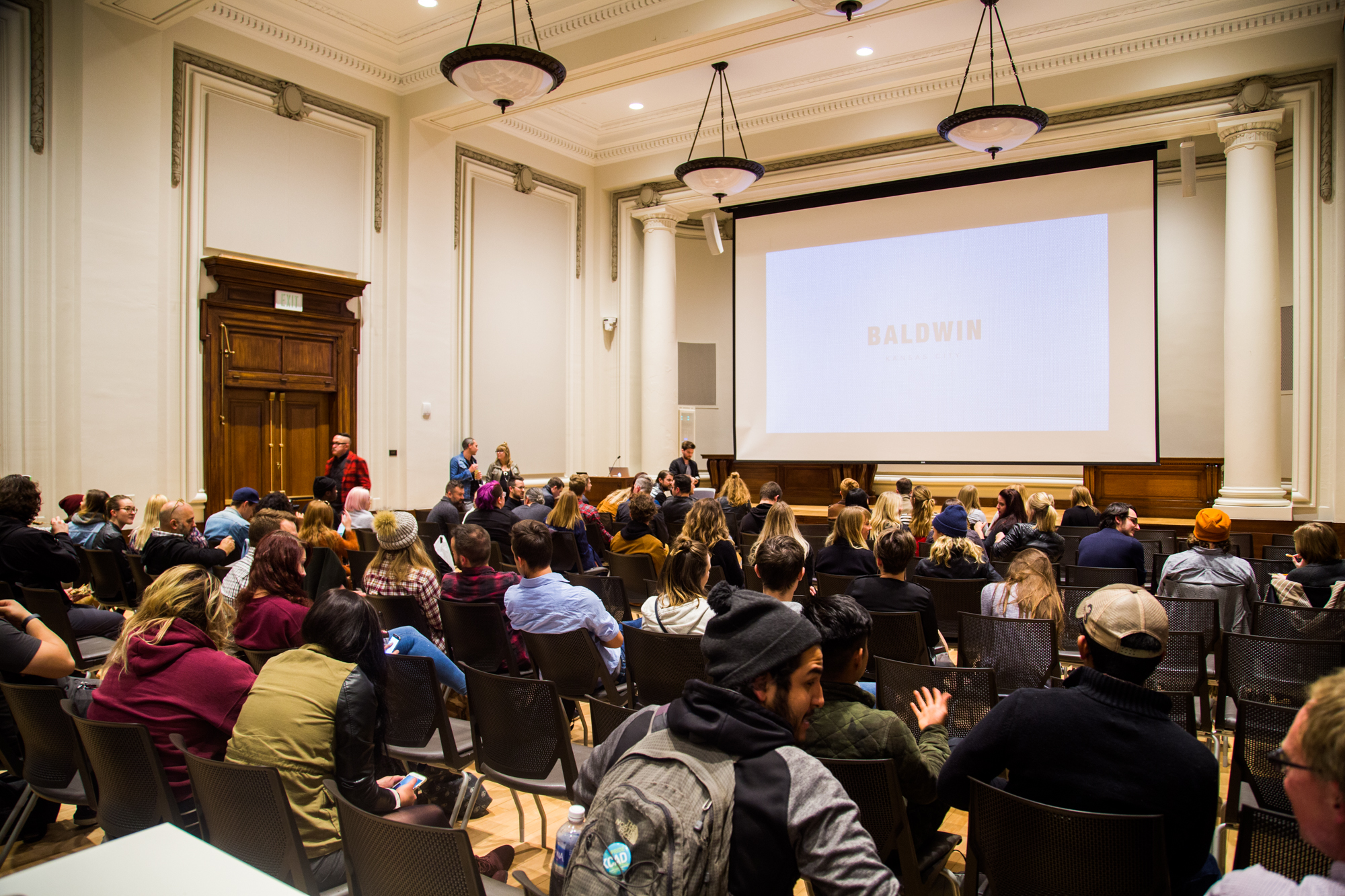 Baldwin drew a packed house of KCAD students, faculty, and staff as well as members of the local community

When he set out to make his first run of jeans, Baldwin believed in returning American denim to its simple, durable, user-centered roots. He did just that by sourcing only the best materials, employing only the best construction techniques, and designing with the customer in mind rather than catering to industry trends. And customers responded, with 23 pairs of the jeans flying off of Standard Style’s shelves the first day they were on sale.

Whereas much of the fashion industry is driven by a desire to shape style, Baldwin sees his role as more of a facilitator of self-expression. At KCAD, he referred to the fresh denim he sells as “a blank canvas for the wearer to tell a story through.” BALDWIN even runs an initiative called #MyBaldwin where the company reclaims used jeans from customers and repurposes them to create washed designs for people who prefer a more worn-in look and feel. 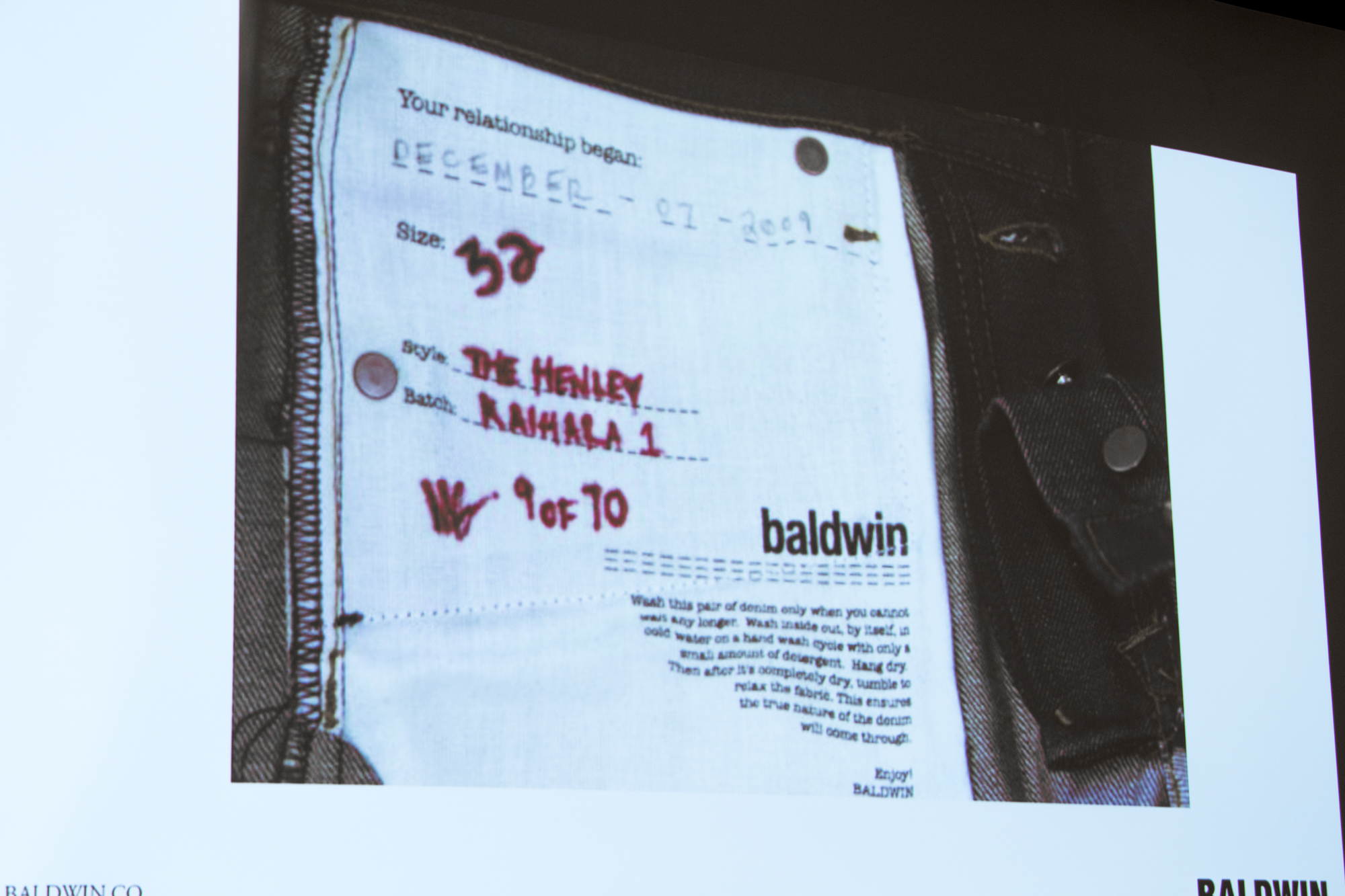 During his presentation, Baldwin showed this slide depicting the inside of one of the first pairs of jeans he ever designed. The hand-numbering and personal messaging reflect Baldwin's human-centered approach to fashion design.

Baldwin is well aware that his way of doing business makes him an industry outlier, but he’s never been one to shy away from risk. In fact, he believes it’s vital to the creative process.

“There’s a certain vulnerability you have at the start of the creative process that you should to learn to embrace,” he told the crowd. “When creative things are birthed, there’s a beauty in that dysfunction that happens early on. You have to make mistakes in order to grow.”

And grow Baldwin has, with two shops in Kansas City and product in major market fashion retailers around the globe. His offerings have expanded from three styles of jeans to multiple lines of denim, pants, shirts, hats, knitwear, and more for both men and women. In 2015, he was named one of ten finalists for the Council of Fashion Designer (CFDA)/Vogue Fashion Fund award, and while he didn’t win, the exposure has helped him make important connections both in and outside of the fashion industry. 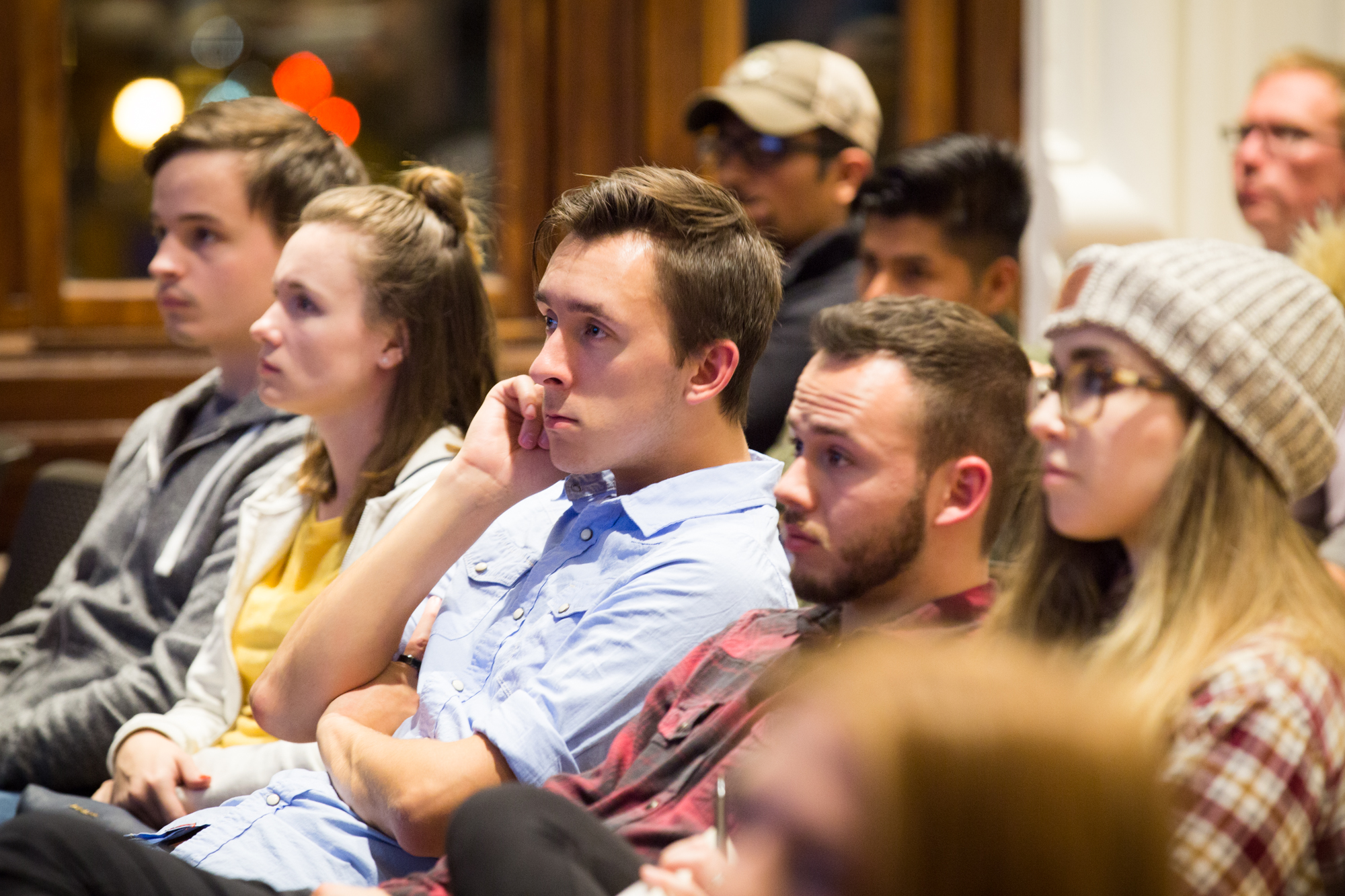 Students soak up valuable perspective from Baldwin, one of the most successful young fashion designers working today

Connectivity, Baldwin told the crowd, is perhaps his greatest asset. He sees the 21st century as a creative renaissance where boundaries between fashion, music, film, and visual art have dissolved and collaboration is a smartphone away. A large part of his success in Kansas City comes from his drive to expand his perspective through travel and expose himself to new ways of thinking about the world and working in it.

“Local ideas gone global – this is the reality we’re living in. Your time is your currency. You can access global culture so readily now; it’s just a cell phone and a plane ticket away,” he told the crowd.

Baldwin also advised his audience to connect with other creatives whose work they admire, telling them to make contact with someone at a more advanced stage of creative development than themselves at least once a month.

“I’m a student of the creative arts. I like to find people who are the best at what they do, who are the most passionate about what they do, and learn from them. We all have a story to tell, but we all need each other to proceed.” 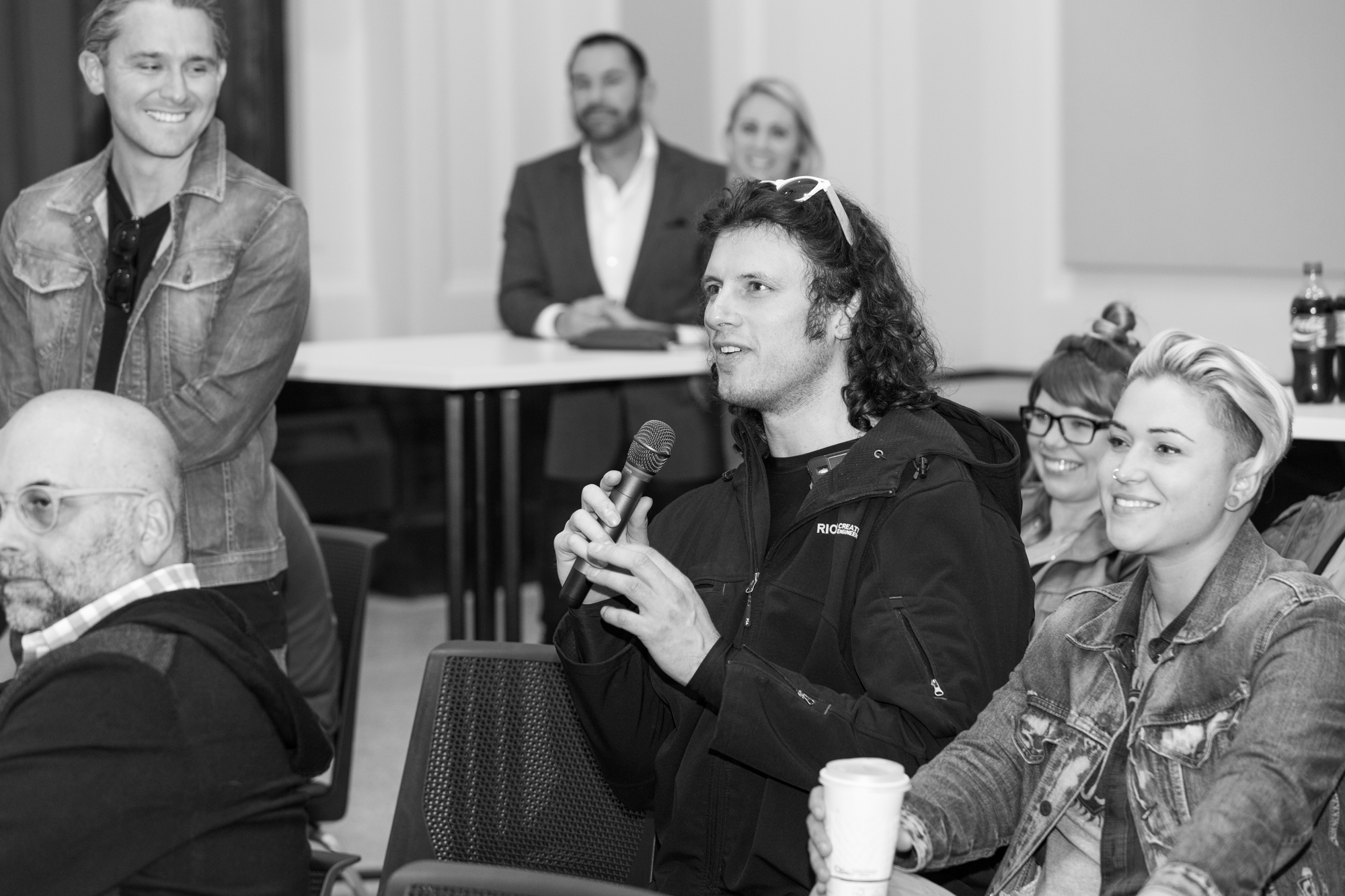 After his talk, Baldwin engaged the audience in a lenghty Q&A session

And if you want to network with the best, you have to strive to be the best yourself. When fielding questions at the end of his presentation, Baldwin made no bones about what it takes to succeed as a creative professional.

“Experiential knowledge builds the future. You have to serve to be great. You have to put in your 10,000 hours,” he said. “Your job doesn’t owe you anything; it’s you that owes it something.”