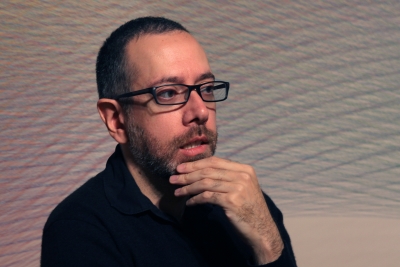 Dawe started working with textiles as a result of his childhood in Mexico. “Mexico has a very macho attitude, as does much of the Western world,” he said. “When I was a boy, my grandmother taught my sister to embroider. I knew she wouldn’t teach me, because I was a boy, and I didn’t even dare to ask her. I found it very frustrating that the social construct was that boys didn’t embroider.”

Dawe’s undergraduate degree is in graphic art, but he began to paint and create collages as an outlet for self-expression and creativity. One day he remembered his childhood frustration, so he picked up a needle and thread and began to embroider minute details of postage stamps from grandmother’s collection, which Dawe inherited. He went on to create two series, "Fear" and "Pain," which utilize clothing as their foundation. 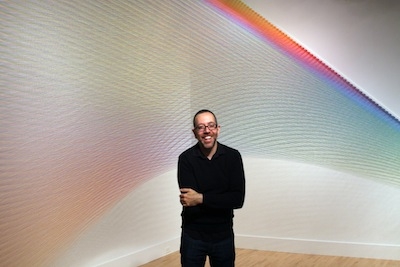 Then, Dawe was invited to participate in a show that melded fashion and architecture. “Clothing, which is made of thread, and architecture are about sheltering the body.” An architect created a frame shaped like an eye, and Dawe used thread to create the pupil. 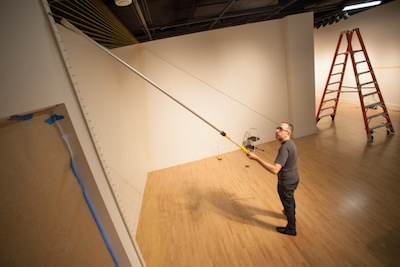 Afterwards, it occurred to him that an entire wall could be covered in thread, so he began to experiment in his studio, going up and down a ladder 300 times a day to create a giant yellow geometric piece. “I don’t know what I had in mind; it was just crazy.” A curator saw his studio piece, and invited him to create one for a show. “It took me about five weeks to create the piece in my studio; but for the show I had only one week. I needed to come up with a way to work much faster.” The solution? A long rod with a hook on the end. The thread feeds from a large spool on the floor, under Dawe’s hand, and through the tip. “It’s sort of a giant needle.” 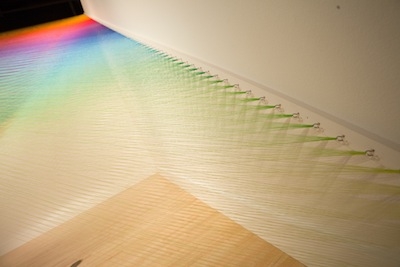 Soon Dawe began creating large-scale installations in the full spectrum of colors found in light. “The relation to light makes the piece stronger, portraying the order behind chaos that can be found in nature, much like a rainbow.” His largest piece to date is a structure that measures 30 feet wide by 22 feet tall by 16 feet deep and is permanently installed in a performing art center in Long Beach, California.

Dawe’s ArtPrize installation is entitled "Plexus No. 18." (Plexus means a combination of interlaced parts; a network.) “These threads are symbolic of the social constructs we must negotiate on a daily basis. We don’t even realize that they are there, but we work around them every day.” 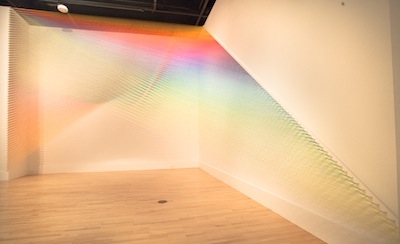 Though the thought of his beautiful work coming down at the end of ArtPrize might be a little disheartening, Dawe is not saddened. Because he cannot reuse the thread, each piece is carefully disassembled and the thread layered in a clear acrylic box for display, in a kind of "second life." “I like how something that is very airy, geometric and made of straight lines becomes something dense and organic. It almost looks like brushstrokes.” He calls these small pieces, some as small as eight square inches, "Relics." So even after ArtPrize, "Plexus No. 18" will live on. 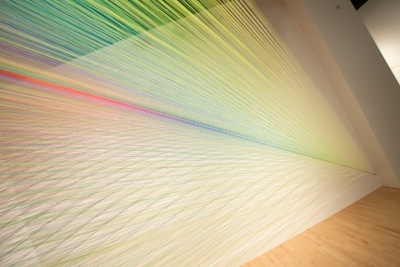