Guest blogger and alumnus Joseph Parr (’13 Industrial Design) writes about his experience at the 2014 International Home and Housewares Show in Chicago, IL. Parr won an all-expenses paid trip to the show after taking third place in the International Housewares Association Student Design Competition for his innovative reimagining of the walker, “Pathos Home Healthcare Mobility Assistance”. Read more about Joseph’s success in the competition over in the KCAD News section.

There was much to do before the show began: launch a website, print business cards, and file a provisional patent, to name a few. School was hardly finished, and yet it felt like I was doing homework again. But I was willing to do whatever it took to make this a great experience.

I arrived in Chicago a day early to see the final stage of the show’s construction. Everything was chaos, with no carpeting, crates in the aisles, and wrapping on the floor. It was astounding to think that in less than 24 hours, the building would be buzzing with energy. During this time I was able to meet with Bill Lazaroff, the Senior Vice President of Lifetime brands (all 50 of them!). He gave me some insights into the world of housewares and led me on a tour of exhibits from brands like Farberware, Savora, and Fred & Friends. 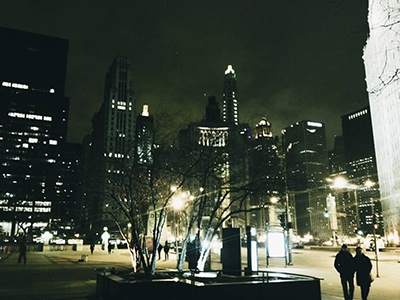 Chicago, the backdrop for the International Home and Housewares Show

When the show began there was a constant flow of people throughout each day. As student designers, we were to stand by our exhibit to explain and pitch our idea to those who seemed interested. There were companies representing their products, manufacturers looking for future products, competitors learning what's new, and retailers looking for products that were ready to sell. 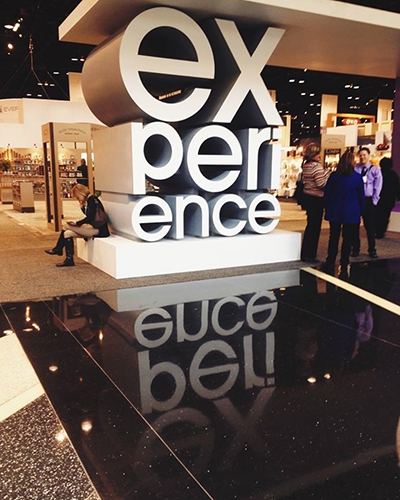 "Experience" indeed! Once inside this entrance to the show, the energy was immense

Many of the interactions were guided by what your badge said. Companies wanted retailers while manufacturers looked for companies, and as exhibitors we did our best to keep up. Most of the time, I was speaking with people whose names and occupations I didn’t know for several minutes until I was handed a business card, only to see that I was speaking to the co-founder or the director of a company. 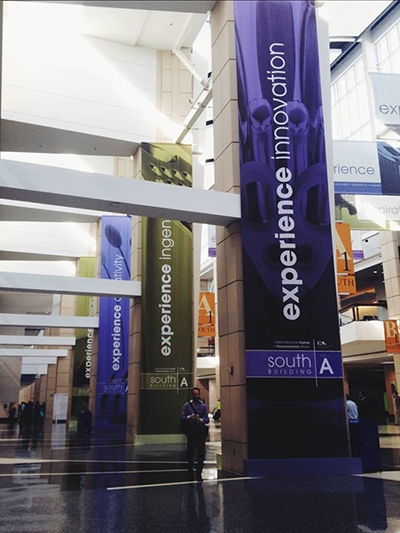 Innovation was abundant at the show, which drew 60,000 visitors from over 125 countries

As such, it was very important to have not just one pitch, but several types of pitches in order to save my energy. Those who were interested were treated to a tailored description of every facet of my design and the process that went into it. If they seemed only slightly interested, they were given an abbreviated version that hit the highlights, which could be easily expanded upon if needed. Some informational flyers that I’d printed saved a lot of time and provided an easy roadmap of the product’s features.

For me, the highlight of the trip was when the industrial design publication Core77 shot a video of each of the winners interacting with their design prototypes. This was also the most nerve-racking part of the trip. Suddenly, a pitch that I had given hundreds of times already had become difficult to say. The final product was only going to be a short clip showcasing the different parts of my prototype, but the feeling of one of my favorite publications filming me was still enough to create some jitters. 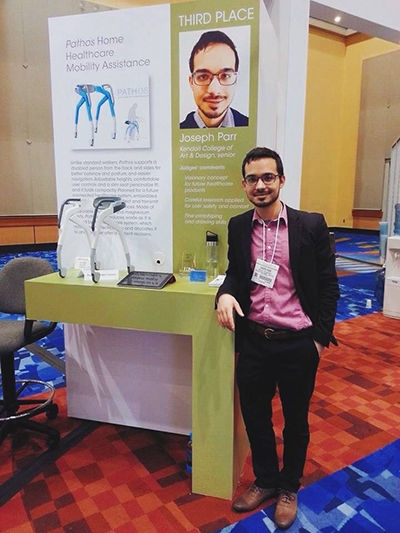 Parr waits at his booth, ready to interact with the crowd

Now that I’m back, I can reflect on what a fantastic experience it was to have so many people show a great amount of interest in my project. The stay in Chicago was amazing and the energy of the trip is still reverberating around me, as follow-up emails are written and articles are being published.

But for me, this invaluable experience was only the beginning of a new chapter in my life as a designer.