Jarod Charzewski: The Land Up North

When I was a teenager, my family drove to Arizona for a vacation. Pre-DVD and iPod, there was little to do but look out the window as we drove along on highways cut through mountains, exposing layers of strata, striations of history revealed.

I remembered that trip when I saw a rendering of Jarod Charzewski’s work. Instead of layers of rock, Charzewski uses donated clothing to build an escarpment that embodies mankind’s impact on landscapes.

I met Charzewski on a Saturday afternoon, as he was just beginning to build the armature for his installation at the Historic Federal Building. He took a few minutes to explain his work to me.

“When I arrive at an installation site, I study the exhibition space as well as the topography of the region. Sometimes I make a rough blueprint or construct a digital model, but mostly the piece comes from an intuitive reaction to the space. I noticed Grand Rapids is kind of hilly, with a river running through it. And coincidentally, my exhibition space has a door built into the back wall, which must be accessible. So those are the elements that I have chosen to emulate in this piece.”

Once the foundation has been constructed, Charzewski begins to build the landscape layers — using clothing donated by Goodwill Industries.

I spoke with Jill Wallace, Chief Marketing and Communications Officer at the Goodwill Grand Rapids headquarters. “We’ve partnered with Kendall on past projects, so when we received the call regarding Jarod’s work, we were happy to help,” she said.

Goodwill brought two 2,000-pound bales of cotton clothing to the loading dock of the Historic Federal Building to be used in the project. “The items were donated to Goodwill, but are unsellable in our stores, because of stains, holes, etc., so we sell them to a broker who recycles them,” Wallace explained.

Charzewski never knows what colors the bales contain. So after much sorting and categorizing, he finally begins layering the material, color by color, building a landscape.

I asked Charzewski what inspired him to create this type of piece. “I grew up in Winnipeg, where many of the parks were built on top of old landfills. I used to wonder what was under my feet. I began to contemplate detailing a landscape by its trash—layers of manmade materials and items discarded, then covered up with a hyper-natural, simulated environment full of bright colors that looks overly natural. What lies underneath?”

Naturally, I asked him the title of the work. “I don’t have it when I begin an installation, but usually it is inspired by a graphic or text I find on one of the shirts.” His Grand Rapids piece is entitled, ‘The Land Up North.’

When the piece is dismantled, the clothing will be returned to Goodwill for recycling. “I like the fact that Goodwill finds new uses for old things, giving a second life to something that might have been discarded into another landfill,” he said, before returning to work. 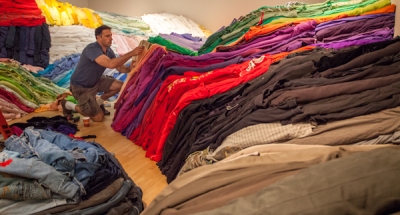