“Friend me.” These two words have become a part of our lexicon, thanks to the social media site, Facebook.

Kathy Halper is the mother of three children (two teens and an early 20-year-old), who are all on Facebook. When Halper joined, her older children “friended” her. “Then their friends starting asking me to be their friend, and so on. I quickly realized that this was a numbers game.” 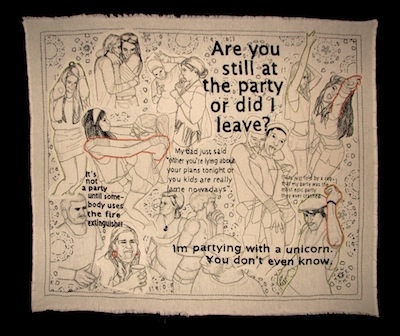 Halper also quickly realized the power of social media. “These kids are taking photographs and uploading them to their Facebook pages for all the world to see. I was overwhelmed by the vastness of the material—these kids were literally documenting their lives as they happened. Some photos were provocative; others displayed energy and joie de vivre. They are doing things that are really no different from when you or I were teens, but the difference is the whole world is witness—and they seem to be unaware of that.”

Halper has always been drawn to the human figure in her artwork, finding inspiration in culture, society and group interaction, particularly candid moments. “I started painting select images from photographs of these kids, trying to convey their energy using bright colors. But I felt like I was missing the message: that I was seeing things perhaps not meant to be seen by a middle-age mom.” 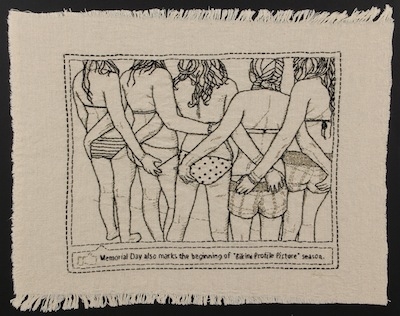 So she turned to a different technique: hand embroidery. She painstakingly composes images with needle and floss, working for hours at a time without noticing how much time has passed. Each image is overlaid with found text. “I find the text on various social media sites. I choose messages that heighten the image, and when I’ve finished, it’s not a replication of what appeared on Facebook, it’s a new creation.”

I told Halper how I learned to embroider from my mother, and how she taught me to make the back of the piece as neat as the front. She agreed. “Needlework recalls thoughts of days gone by. It brings to mind a more innocent time, and images of safety and security.”

Although embroidery is less physically demanding compared to hours spent standing while painting, it still takes Halper a couple of weeks to complete a piece. 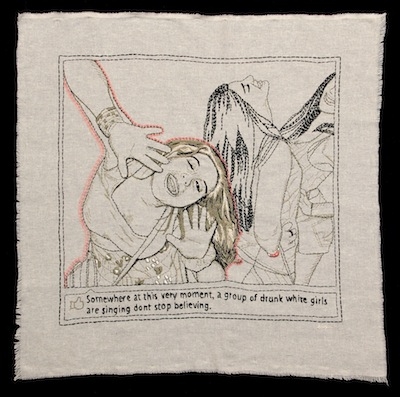 And what do her children think of her work? Her kids’ opinions vary. “My middle one is an artist herself, she is studying at Parsons School of Design, and her friends have requested that I embroider them. Some will send me friend requests expressly for that purpose. On the other hand, my son was less interested until a friend yelled at him, ‘Why hasn’t your mom done my picture?’ So he’s now taking part. 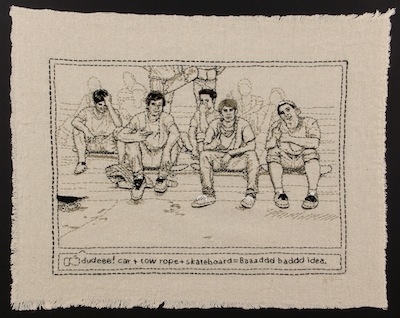 I’m exploring the idea that these children act as though only their friends are seeing their posts, when in fact they are out there for the whole world to see. It’s not meant to be a cautionary tale, to teach a lesson or pass judgment. The desire to share experiences is not new. When I was their age, we passed around Polaroids at parties. I don’t think these kids are doing anything we didn’t do; they just have a wider audience.”

And yes, I have asked Halper to friend me. 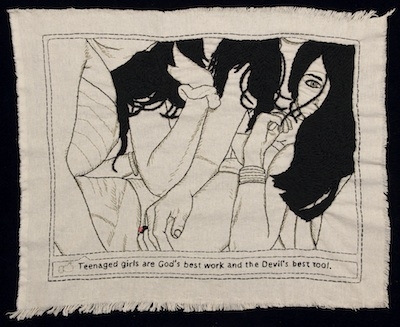