Most students wouldn’t think of taking on a massive outside project the week before their semester started, but then again it’s not every day the chance to create a mind-bending music video for an up-and-coming musician comes along.

Despite the challenges involved, the four Kendall College of Art and Design of Ferris State University (KCAD) students behind the video for “Insane,” the first single off Dayton, OH-based singer/songwriter John Nichols’ debut album, “Beach,” emerged from the interdisciplinary collaboration with an expanded sense of creative possibility.

Photography student Jeen Na has been friends with Nichols since high school and has worked on promotional materials for him in the past. This summer, when Nichols expressed an interest in creating a music video for his upcoming album, Na jumped on board and got his friend and junior Collaborative Design student Aaron Porter involved as well.

Porter, an experienced videographer who co-founded the production company Mainstay during his freshman year at KCAD, met with Na and Nichols over the summer to get an idea for the scope of the project. To help with shooting and editing, Na and Porter brought in fellow KCAD students Aaron Covrett (Graphic Design) and Isaac Taracks (Digital Media).

Like “Beach” as a whole, “Insane” is about doubt, the disappointment of lost love, and the desire for acceptance. To communicate these very abstract emotional concepts through video, the team contrasted a use of rich colors with other segments rendered in black and white. They then layered in other visual effects like a computer-animated glitch effect that appears periodically over Nichols’s face to represent emotional struggle, as well as a cinematographic effect where the screen flips over like an hourglass to mimic the emotional roller coaster of being in love. The video also makes heavy symbolic use of water, with some scenes shot in Lake Michigan and others in a swimming pool.

The process started with a two day shoot, but took almost two months to complete, partially because the four students decided to also take on all of the branding for “Beach,” creating promotional materials and a website to promote the album’s release. 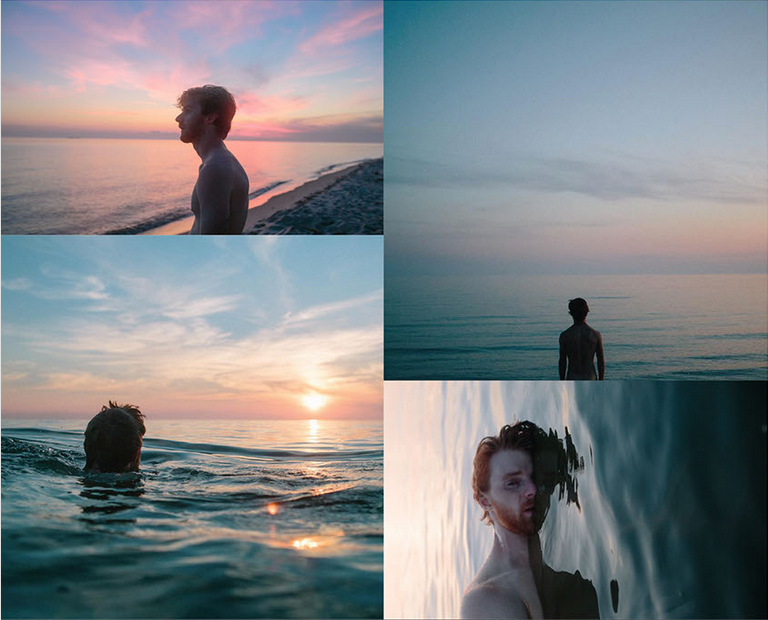 (above): stills from the video, taken during shooting in Lake Michigan; (below): the students also helped Nichols develop promotional materials including photographs and graphic posters 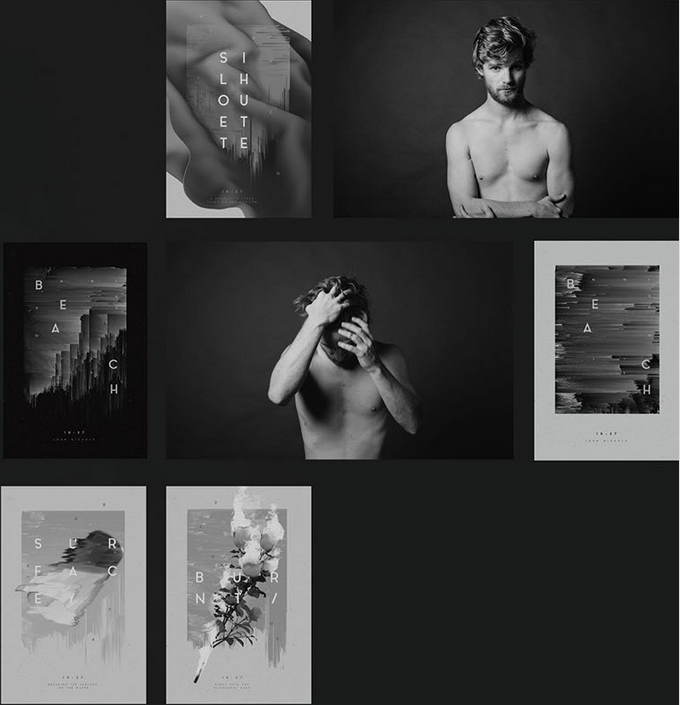 “We had full creative control and we wanted to create a piece that we could all put in our portfolios that showed that we could do something bigger than just a logo, a flyer, or a one-off video. Something that showed we had the ability and the mindset to be able to create a story based on this entire thing. You can’t build a career unless you show you can do that,” says Porter.

The four jumped into a project that would normally require a large team of people while still attending school full time and working other part-time jobs. The process was intense and difficult, but they put in extra work to make a video they believed in.

“I’m still in the recovery phase,” says Covrett. “It gives you such a feeling of purpose, though, and all that time put in was worth it. Moments of rest feel deserved when you work on a project like this.”

Shooting the water scenes proved especially difficult. Windy conditions on Lake Michigan paired with chilly temperatures made it hard for Nichols to stay above water during the shots where he needed to be swimming or treading water, and by the end of the shoot the entire crew was freezing. Shots of Nichols opening his eyes under water in a pool required Covrett to hold Porter down for filming. Later, they had to go back in with visual effects to, ironically, make the water they’d shot look more real.

Post-production, challenges arose as the students tried to finish a video, album art, promotional materials, and website before their deadline. Because of their different backgrounds, skills and personalities, it was sometimes difficult for the students to see the project from the same point of view.

“The deeper an idea or concept is, the more satisfying the outcome, but the harder the work,” Taracks says. “You can’t just plow through when you have revisions and critiques.”

The students got very creative in the post-production process, creating a digital distortion effect (above) and animating entire others scenes featuring water, flowers, and a blanket over a white background (below)

Through the process, the students all learned from working with each other. “Initially I was butting heads with Isaac and Aaron [Covrett] asking why we can’t do certain things, but then they’d explain it to me,” Na says. “It was really nice because sometimes Aaron [Porter] and I can get too conceptual and [Covrett and Taracks] were here to help ground that.”

Covrett continues, saying, “Isaac and I were more on the technical side, to filter through what [Na and Porter] were saying and what’s actually possible and then they were there to push us and broaden our understanding.”

Despite their struggles, all four maintain that the project would not have been as successful if they had all come at it from the same perspective.

“In school, they tell you that you want people from different backgrounds to get a well balanced feel on a project, but you don’t understand that until you apply it to a situation. If we had worked in a group of only one particular major, I think we would have missed out on a lot,” says Na. 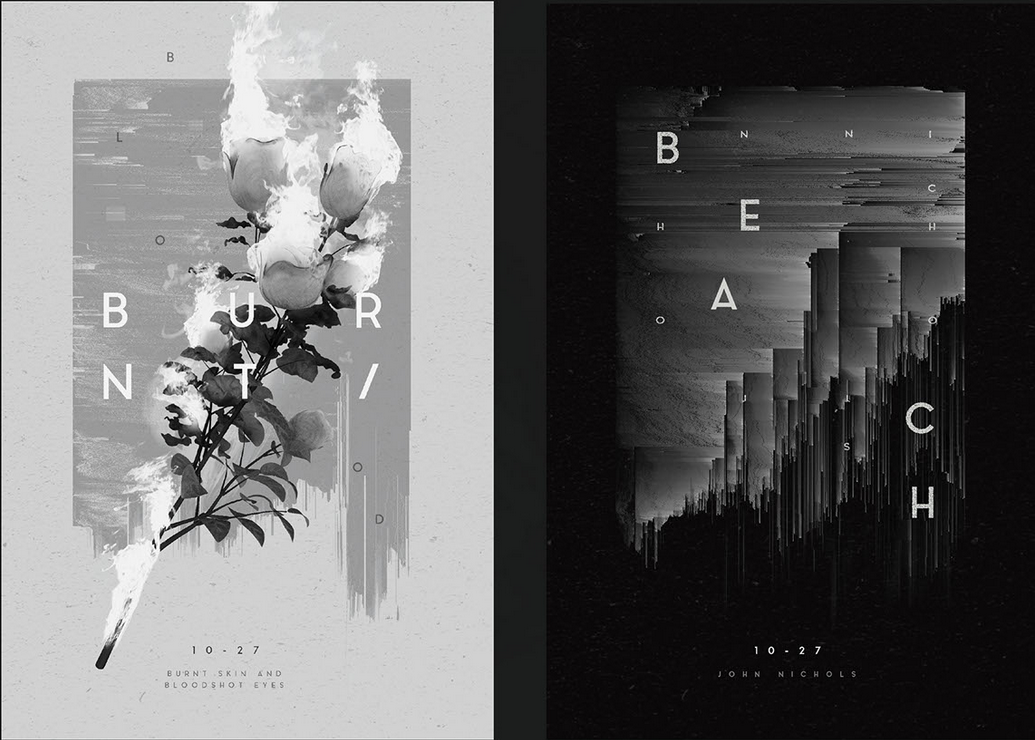 More of the promotional materials the students created, including posters (above) and a social media campaign (below) 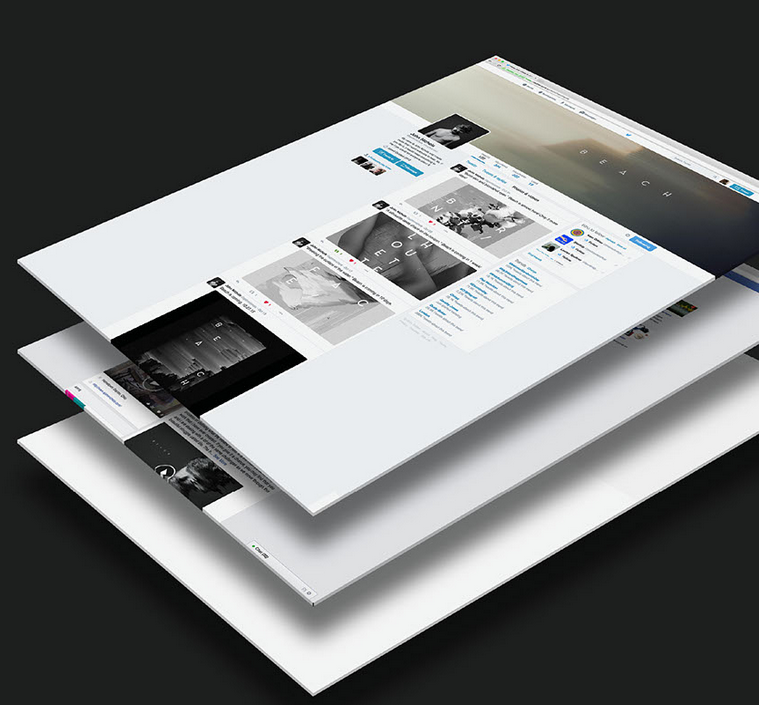 The process may have been difficult, but the group says that in the last 24 hours before the release, all of their hard work paid off as things fell into place and the video finally came together. While it’s true that they could have made something less complicated, they would not have been happy with anything less than amazing.

“We could have settled for something less, but we were never going to let that happen,” says Na. “This was something we felt really strongly about and we planned for so long, so we weren’t going to settle for something less than how it eventually turned out.”