It was a great turnout Thursday evening when Kendall presented legendary illustrator, product designer, auto designer, industrial designer and “visual futurist,” Syd Mead in person for a lecture and presentation of his work. 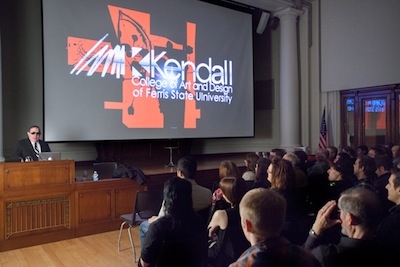 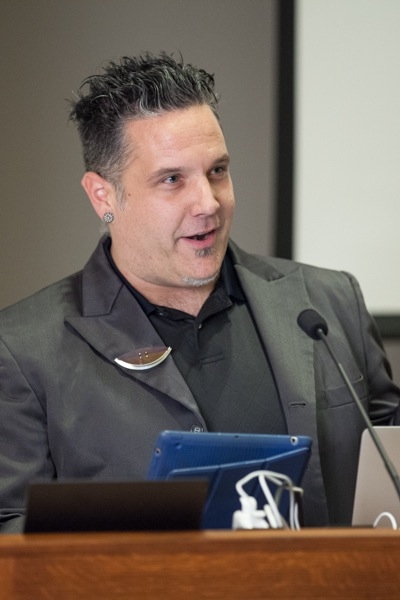 “When I was 12 years old, my father took my brother and I to the drive-in movies—you know, where you sat in your car to watch the movie as the audio was broadcast on the radio. The first movie of the double feature was Nightmare on Elm Street; but it was the second movie, Alien, that really made an impression. Spaceships, cars and trucks that flew through the air and wrecked stuff—it was better than Transformers. At the time, it didn’t occur to my brother and I that these things that embodied a vision of the world 200 years in the future, were designed. Generations of designers have built on Mead’s work; and his designs have helped to make the world look the way it does. He and his work are a perfect example of the ability of artists, and art and design, to shape the world.” 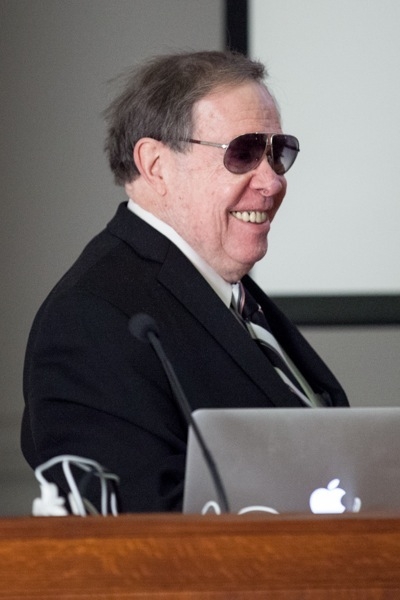 It was the 79-year-old Mead’s first time in Grand Rapids, and he was very complimentary of the Historic Federal Building.

He also explained his moniker, “visual futurist.” “They needed a title for me when I was working on Blade Runner so that’s what I made up.” 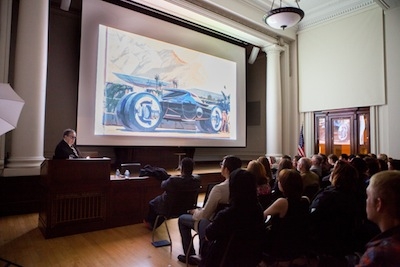 We were all enthralled for the next hour as Mead explained his storytelling process. “The future starts right now. When you are creating something set in the future, it has to have a familiarity trigger. The environment has to have a ‘remembrance factor’ — something familiar—to make it believable. Then you can start adding something weird and different.”

“And there must be a story. There’s a story behind each illustration. We all have stories in our head. It could be a story for marketing, or a story just for our own entertainment. And each story has to take place in a world, a place.” Mead indicated a rendering showing on the screen. “See, here’s the Grand Canyon. That’s familiar. Now I can add a futuristic vehicle. And I like to create party scenes, that way, I can have people dressed oddly and doing weird things and the viewer finds it perfectly acceptable.” 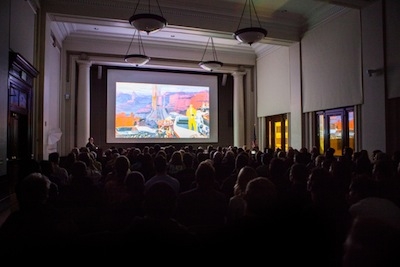 Moving from his vehicle concepts and product renderings, Mead turned to the movies, saying, “Movies have treated me very well—they are the most elaborate way to tell a story.” And Mead’s storytelling has run the gamut from Star Trek: The Motion Picture, Blade Runner, Short Circuit, Alien, Time Cop, Johnny Mnemonic, District 9, Mission Impossible III to, most recently, Elysium, due for release in 2013. (And it took a moment for me to figure out that the “Jim and J.J.” he referred to are directors James Cameron and J.J. Abrams.)

With a reminder that three elements—story, world, and stuff (the little things that fill in the gaps)—are required to create a convincing atmosphere, Mead left us with this thought: “I can think of no better gift to oneself than to add and retain the wonder of childhood with the gathering of adult experience.”