Ladies, this piece is amazing. It’s just so pretty and feminine.

Jeffrey Augustine Songco has watched a lot of television in preparation for his next project. Not just any television. Songco has spent countless hours watching home shopping channel shows, in particular those featuring jewelry hosted by women with acrylic French manicures. 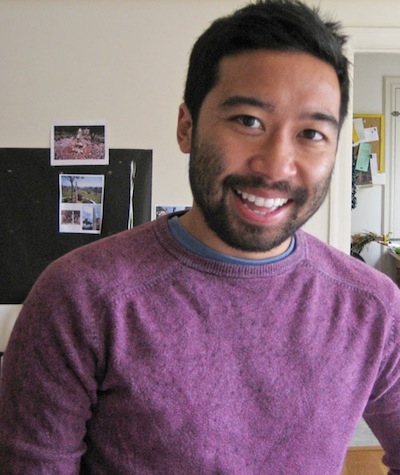 “There’s a whole world revolving around these shows, especially the hosts,” he explained. “They have regular viewers who won’t miss their host’s program. The viewers call into the show, and express their admiration for the host. These ‘celebrities’ know very little about the viewers – their fans – but the callers seem to know an awful lot about the hosts.”

And Songco notes that in selling jewelry the hosts use many references to Christianity. “They say, ‘This piece will look great with your Easter dress.’ There are shows devoted to Christmas jewelry. And the phrase, ‘God bless’ is routinely part of the call-in segments. From watching, it’s easy to get the impression that we are a nation of Christian consumers.”

Songco has written a film script, “The Host” about a home shopping channel host on mythical At Home Buyer Television, who juggles her festive pre-Christmas Catholic rituals with the recent news that her college-aged son is gay. Songco uses text from “The Host” as part of his ArtPrize 2012 piece. “Hosanna,” a triptych of large digital prints, features a photograph of a piece of jewelry that one might find on a home shopping channel, overlaid with lines from the script. It’s in keeping with Songco’s exploration of nationalism, religion, and gender roles.

Songco hopes his artwork will produce “an infectious feeling of anxiety that can only be alleviated by, a) the acceptance of the fluidity of meaning, b) the impossibility of fully comprehending the absurd, and c) the inability to control your own laughter.”

Last year Songco’s ArtPrize piece, “GayGayGay” a pride-rainbow striped Klan robe, was displayed at Westminster Presbyterian Church. He spent about a week in Grand Rapids, getting to know the city and the art community as he installed his piece.

“Viewers of last year’s piece had no idea who was under the robe. Man or woman? Black or White? This year’s piece is playing with the same ideas and specifically pointing a finger at the role of women in American society.”

When I asked Songco to categorize his work, he explained, “All my work is traditional materials, I just happen to work with interesting concepts.” Instead of materials, he divides his work into one of three areas: Projects, the Society of 23 (reflections on brotherhood), and Gus23, his on-line persona who reflects on the anonymity of the Internet.

Songco, 28, recently completed his MFA at the San Francisco Art Institute and has had his first solo show at Steven Wolf Fine Arts in San Francisco. He was recently recommended for the bi-annual SECA (Society for the Encouragement of Contemporary Art) Art Award. Since 1967, the SECA Art Award has recognized more than 70 artists and given hundreds of finalists a platform to speak about their practice.
~ Pamela Patton