Most of us are content to take things like music videos, advertisements, films, and fashion designs at their face value. But a deeper look at the imagery of our popular culture reveals that it actually says a great deal about our global culture at-large and how we construct and consume it.

One of the newest graduate programs at Kendall College of Art and Design of Ferris State University (KCAD), the Master of Arts in Visual and Critical Studies, is focused on exploring visual culture in order to analyze and critique the information it contains. In addition to the issues explored in the classroom, the program engages the community at-large in these dialogues by bringing in guest speakers who have dedicated themselves to the critique of visual culture.

Most recently, the MA in Visual and Critical Studies program sponsored a lunchtime visit from Dr. Victoria Pass, who spoke about the ways in which products of popular culture portray ethnicity as a consumable commodity in her lecture titled “Moving Beyond the Click Bait: Understanding Spectacles of Race in Visual Culture.” 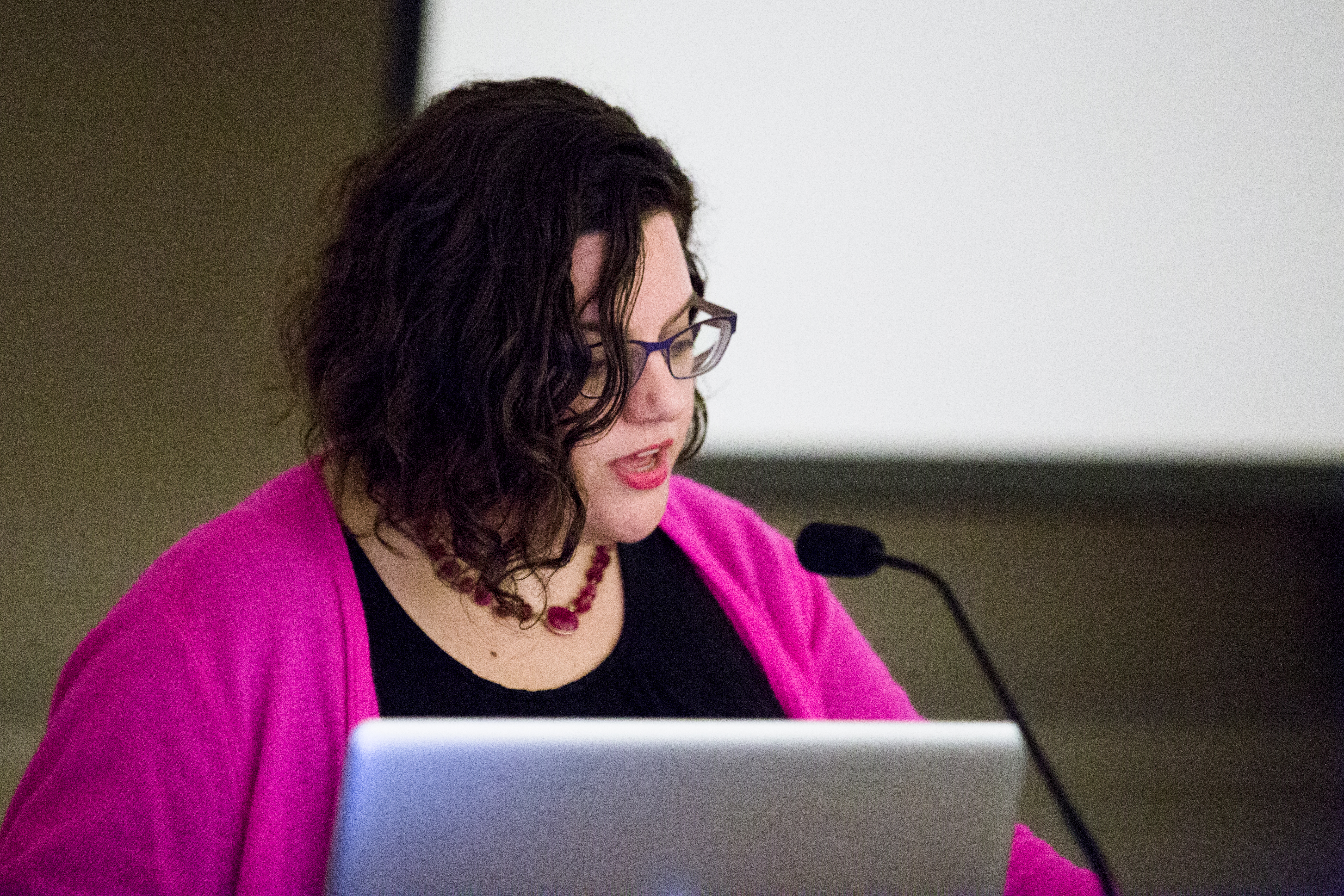 Pass, who teaches in the Art Department at Salisbury University in Maryland, began her talk by showing Taylor Swift’s recent music video “Wildest Dreams.” In the video Swift plays an actress in a Golden Age Hollywood movie set in Africa; Pass remarked that the videography is clearly reminiscent of the 1985 film Out of Africa starring Robert Redford and Meryl Streep. Using imagery from both the music video and the film, Pass claimed both portray Africa as “a cinematic backdrop for white-dominated, Euro-centric plotlines in which the ‘wildness’ of Africa is a vehicle for self-discovery and/or sexual awakening.”

In response to public objections, the director of Swift’s music video publicly attempted to prove that the video was not participating in romanticized stereotypes of Africa and African culture long perpetuated by colonialism. However, as Pass argued, this response is indicative of a larger twofold problem. She explained, “While many of these images arise from a genuine sense of entitlement on behalf of their producers to appropriate any cultural image, whether they understand it or not, others arise from a genuine ignorance of the ways in which racism is institutionalized in our country and the painful histories from which many of these romanticized images emerge.”

To further illustrate her point, Pass turned to the world of fashion. Using spreads from Vogue magazine, Pass explored examples that further this romanticized idea of African cultures as “other” or exotic by featuring models of color and appropriating patterns, fabrics, and symbols from non-Western cultures. 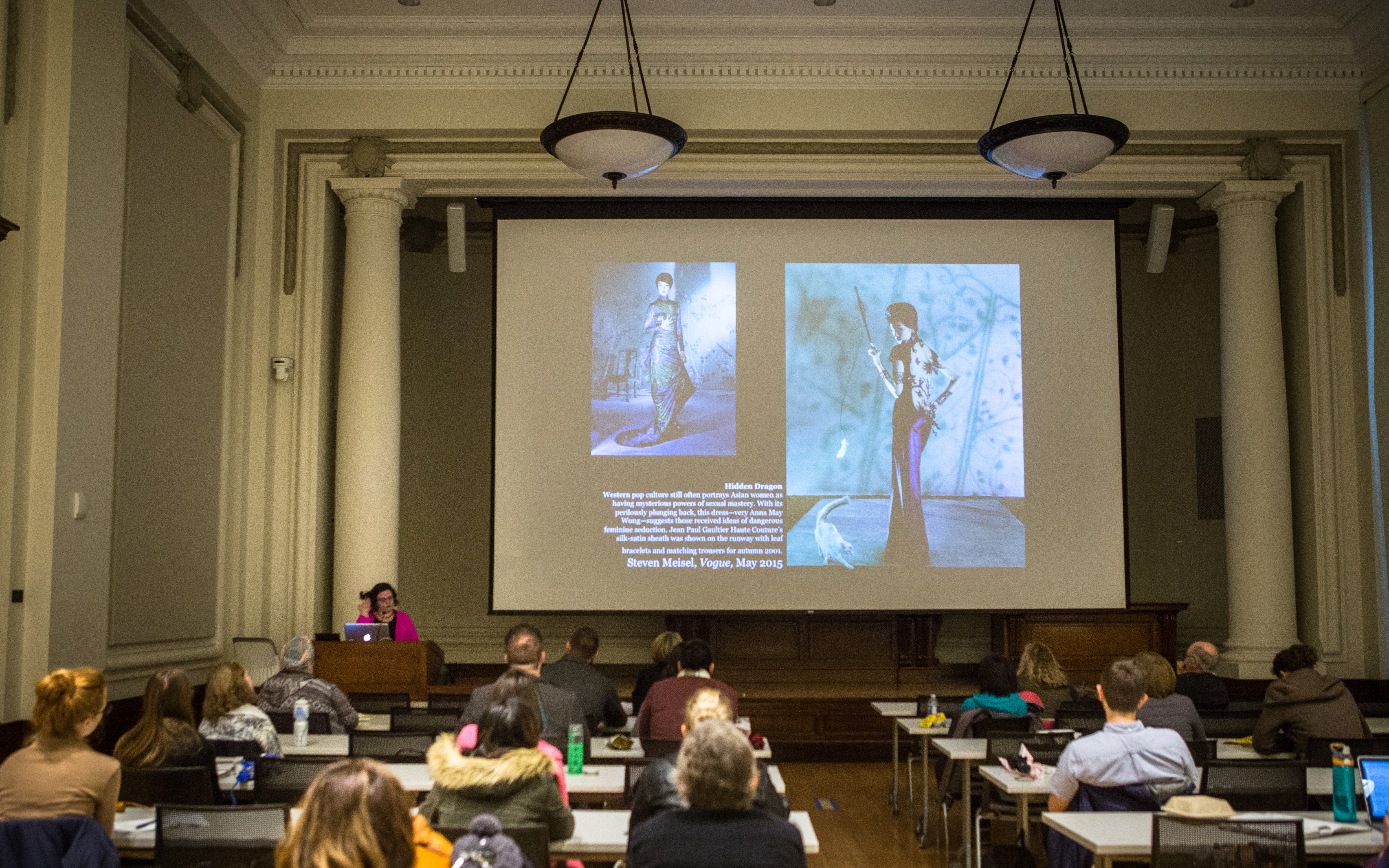 Part of Dr. Pass’ lecture explored cultural appropriation in the world of fashion

Nevertheless, Pass took care to clarify that not all fashion magazines or designs are guilty of cultural stereotyping, saying “I would argue that the fashion magazine can occasionally offer a unique, and potentially very powerful space for disrupting traditional modes of representing race in popular culture, precisely because it’s a space of fantasy and aspiration, offering freedom from rules that would otherwise apply.”

Unlike much of the public discourse surrounding issues of race in imagery, so-called “click bait” journalism—which Pass argues uses provocative headlines to reduce such issues to a series of unproductive debates about whether images are racist or not—Pass is interested in getting beyond that simplistic question in order to start thinking more deeply about why these kinds of problematic images continue to exist.

So if Pass’s lecture left attendees with more questions than answers, then it lived up to organizers’ expectations. Dr. Karen Carter, who teaches in both the MA in Visual and Critical Studies and Art History programs at KCAD, stresses that MA in Visual and Critical Studies-sponsored lectures are intended to engender discussion beyond the bounds of the classroom and into the community at-large, where ideas can often assume a greater sense of influence and have a larger impact.

“We want to foster intellectual discussion that invigorates both our students and our community as a whole,” says Carter.

Visiting lecturers also play a key role in the academic experience because they can talk about specific issues that professors may not be able to cover in class. Carter says those opportunities take academic learning to a different level, giving students the chance to connect what they’re studying in courses to what’s happening in the world around them.

“It’s a different way of thinking about the critical theory, instead of having everything sealed into a neat little band,” says Carter. “We’re not thinking of theory as being an abstract concept. It has to connect with some area of your life.”

A broad array of lecture topics can bring attention to the interdisciplinary nature of our contemporary visual culture and help students understand how they fit within it.

“Images are virtually inescapable; everything we experience today is through images. This is a completely different historical moment than even 100 years ago,” says Carter. “What we want to know now is how people are reading and reacting to these images. It’s not about politicizing issues, but instead asking people to confront things they usually don’t think about.”


Click here for more information on KCAD’s Master of Arts in Visual and Critical Studies program.