Creativity is messy. And Melissa Cooke’s process is really messy. But leaving the studio each day looking like “Pig Pen” (her words) from the Charlie Brown comics is a part of the process.

Cooke creates her drawings by dry brushing thin layers of graphite onto paper. Sometimes she uses a brush, other times a soft cloth or cotton swab. The softness of the graphite provides a smooth surface that she augments by subtly erasing graphite to create details and textures. No pencils are used in the work, allowing the surface to glow without the shine of heavy pencil marks.

So I asked her how she came up with this unusual technique. In a nutshell: It was born of frustration. “I started using powdered graphite in January of 2008. I was at a point in my work where I was feeling stagnant and confined, making these tedious, small pencil drawings. I knew I had to make some changes. My solution was to visit an art store and leave with an armful of new supplies, including a can of powdered graphite. I tried watercolor for about two days, and was miserable. Aggravated in the studio and mourning over some horrible wash of blue that I was attempting to paint, I grabbed the can of powdered graphite and a huge sheet of paper. No one had ever shown me how to use the medium; I just got hold of the nearest brush and started feverishly dusting the graphite onto the paper. Within four hours, I had a new drawing and was pulsating with excitement from this new process. I was immediately addicted.” 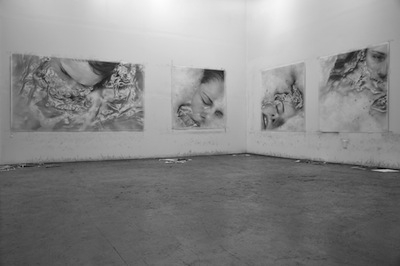 Cooke discovered that typically graphite is mixed with alcohol to create a wash, but that didn’t stop her. “I start by using a dry paintbrush to apply the graphite. Then, a variety of erasers are used to gently lift layers of graphite off the paper to create contrast and shadow. After I got more accustomed to the media, I began using different soft tools to apply the dust. The technique is in a limbo world between drawing and painting.” 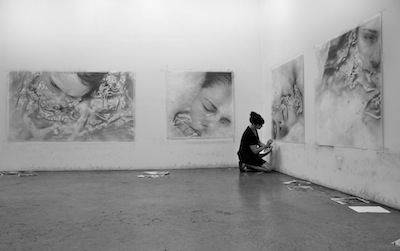 Watching Cooke draw is like watching a ballet. Her pieces typically measure 4-1/2 feet tall. She will work on a section for 20 to 30 seconds, then step back — about eight feet back — for a better look, then return back to the piece. “Lately, I’ve taken to using a rolling office chair to zoom back and forth, but it’s still a very active process.” 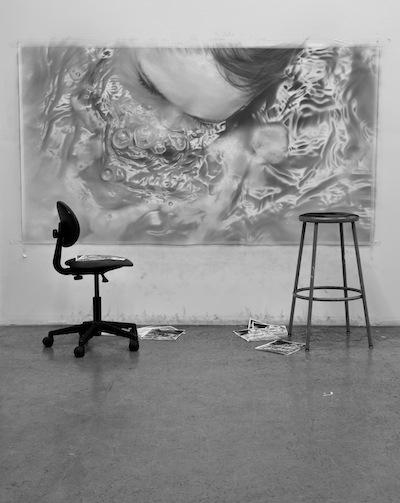 Cooke is usually the subject of her work, playing different roles in each series. In her latest, the Wisconsin-born artist seeks refuge from the noise and chaos of Brooklyn, New York, through submersion in her bathtub. “Being in the water reminds me of home; the lakes of the Midwest.”

Cooke’s four ArtPrize pieces will be shown unframed, hung by magnets so that viewers will be able to see the surface of the paper without the glare of glass flattening it. Her exhibition will include a video that documents the creation of Drift, one of the drawings.

Cooke will speak about her work and technique during an Artist’s Talk at Kendall, on September 20 at 11:30, in the Gallery at the Historic Federal Building. 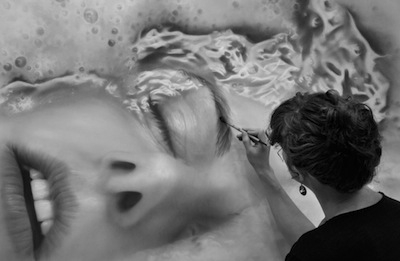