The researchers in Workspace Futures collect all sorts of data to understand evolving issues that impact workplaces such as offices, universities and hospitals. Of course, a lot of their research is confidential and proprietary, and involves a lot of graphs and statistics, and charts and numbers.


These folks consume data the same way that children gobble up cookies, but sometimes it’s difficult for them to translate their findings (medical errors can be reduced through efficient use of facilities), into humanized information that marketers, designers and others find compelling (space saves lives). 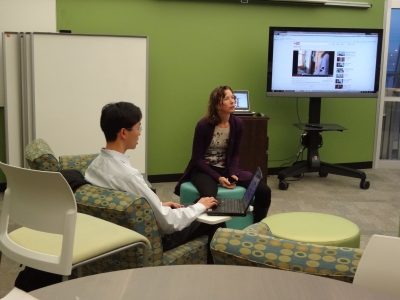 Guertin writes stories, some of which have been adapted for animated films, most recently “Blame Cupid Stupid,” which won Best of Show, Animation, in the Beverly Hills Film Festival, 2011. Guertin has spent most of his working career in computer graphics, advertising and publishing, has worked for three animation studios in Canada, and was employed on several animation projects, including the Lucas “Ewoks” series, “Care Bears”, “The Raccoons”, “Babar”, and numerous commercial projects for television.

The storytelling workshop Guertin presented to Steelcase was essentially the same Writing for Film and Digital Media lecture that he has given to Kendall Animation and Digital Media classes since 2007, and is now taught to non-degree-seeking adults as part of Kendall’s Continuing Education curriculum.

Guertin shared that stories are a more engaging way of expressing ideas, and the best stories can be condensed down to one point, (unlike stories told by Aunt Martha—and everyone knows an Aunt Martha—who can ramble on and never reach a point—if she ever had one.)

Using the structure of the classical argument, we watched commercials, short animated films and propaganda films, dissecting each to unearth the main idea (or the “so what?” as researchers dubbed it), and its underlying structure. This was fascinating to watch, as several researchers admitted to never watching TV, let alone commercials!

I wish I could be there to observe when the researchers present their next findings—oops!—tell their next story. 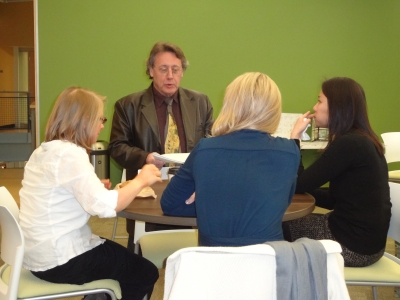