In this installment of Prototype, we profile Rebecca DeGroot (Senior, Art Education/ Sculpture and Functional Art)

The wooden creations in front of Rebecca DeGroot look Martian, as though they’ve just scuttled right out of the pages of H.G. Wells’ “The War of The Worlds” to await orders from the mother ship.

Actually, they’re bowls, albeit unsettling ones, and DeGroot has been infatuated with them ever since creating her first one (seen below) for a Sculpture and Functional Art class. Despite repeated cautioning from her teacher that every aspect of her design would be extremely challenging and time consuming, DeGroot let her imagination run wild. Before long she was turning out her creature-like bowls at a prolific rate, each one with its own unique physical characteristics.

The first in DeGroot's series of creature-like bowls, complete with a complicated tambour that runs around a track

"I was really drawn to this concept of taking a typical domestic object and adding animalistic qualities to it,” DeGroot says. “There’s a shock value in a bowl with legs that looks like it might start crawling around the table. I loved seeing people’s reactions, so I just started to make more.”

Though DeGroot admits that the bowls are "a series that I need to work my way out of,” (she spent an entire summer on one bowl) she doesn’t see the medium as limiting. If anything, her enthralling creations are a direct result of the deep feeling of freedom that creating art has always given her. Homeschooled until the 7th grade by her mother, who was also an artist, DeGroot found early on that art stimulated something inside her that other subjects couldn’t. 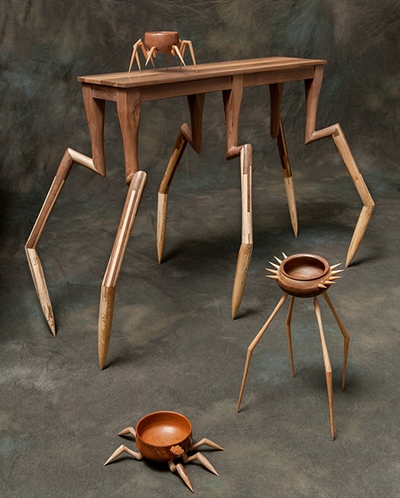 More of DeGroot's wooden bowls, shown here with a custom table she designed in a similar animalistic fashion

“[Art class] clicked with me,” she says. “It was the time of day that I looked forward to. Once I got into a normal school setting, the same thing happened. Art gave me freedom, and the teachers were much more forgiving if I did draw outside the lines, literally. They really let anyone thrive in those classes. It’s expressing yourself, being who you are, and showing that off.” 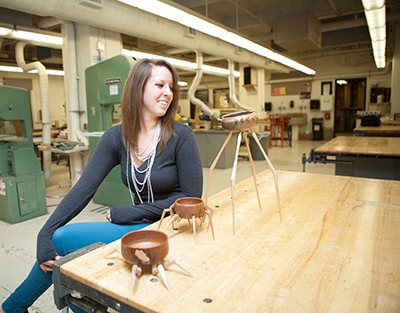 "Art teacher" is not a typical response you’d hear from a kid who’s just been asked what they want to be when they grow up, yet DeGroot has felt destined to become one ever since discovering her passion for artistic expression. She came to KCAD hungry to learn how to instill that same passion in the artists of tomorrow.

“One of the many things I’ve learned in my art education classes is that there’s a certain stage in every student’s artistic development where they hit a block, and the students that actually work that and overcome that block are the ones who usually excel,” DeGroot says. 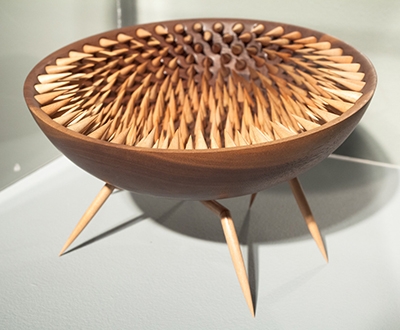 Another custom designed bowl, this one featuring an interesting array of hand-sharpened spikes

Currently, she’s determined to find ways to deny such barriers. During her second semester of required pre-student teaching at Coopersville High School she has been working to develop lesson plans that can get students of all skill-levels and personalities engaged with art.

DeGroot was also able to connect with younger minds by merging her passion for art education with her talent for functional art during ArtPrize 2013. As an unofficial part of the ArtPrize festivities, she brought an idea originally conceptualized by Art Education faculty members to life with “Shower of Gratitude,” a stunning installation in the atrium of the 17 Fountain building that used art to teach K-12 students the importance of being thankful. The installation was a carefully planned, mathematically aligned suspension of different lengths of white string that formed a tunnel which viewers could walk through. Attached to each string was a piece of paper upon which the students had written something that they were thankful for.

“As I watched the students explore the installation, I could tell that they were really thinking hard about what it means to be truly grateful,” DeGroot says. “It’s really rewarding to be able to build something that affects people in such a way.”

For ArtPrize visitors, “Shower of Gratitude” was a beautiful and unexpected surprise that would have garnered its fair share of votes had it been an official entry. For DeGroot, it was a crowning achievement – a fusion of education and artistic expression that gave each viewer the freedom to discover their own inspiration and their own meaning, just as she’d done herself as a young girl with a very uncommon dream.

Want to see some of Rebecca’s extraordinary woodworking creations in person? Visit the Newaygo County Council for the Arts’ Artsplace gallery, where a special exhibition of Rebecca’s work will be on display from now until February 1. The artist herself will be on-site at a reception on January 25 from 10:30am – noon.