Philip Han is a Kendall Collaborative Design student blogging for kcad.edu from his summer internship at Gensler in Shanghai, China. This is the second installment of a two-part series. Read the first installment here.

My first two weeks interning at Gensler involved creating case studies, foam mass models, preliminary research, and presentation material. The work was intimidating at first, but after a week I felt comfortable. A project manager assigned three 1/2000 scale foam mass models of an upcoming mixed-use proposal. They were constructed using cutting foam with blades and a hotwire in the office printing room.

The office culture at Gensler is active and community driven. There are weekly presentations by various designers, artists, and firms as well as workshops, movies, daily inspirations, parties, and many other events. The entire Gensler office meets on Friday afternoons for news, updates, to introduce new staff, and to socialize. Every other week each studio hosts its own meetings to share news and updates. Having been completely immersed in my internship, I invited people from various parts of the office out to lunch, coffee, or art/design related events. As a student, these are rare opportunity to learn, connect, and pick expert's brains! 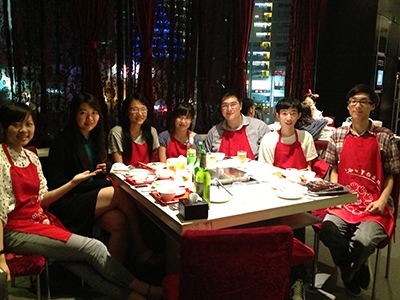 A one-month research program was assigned to all 17 interns this summer. There were two groups, a Commercial Office Building team and a Transit Oriented Development team. I ended up joining a third project titled “Interstitial Spaces: Researching China's Spaces In-Between,” which was awarded the first Gensler grant in Asia. I worked with another intern named Yuan, who is in the Masters of Architecture program at the University of Michigan. We had two sponsors from the work/flex 2 architecture studio: Shamim Ahmadzadegan, design director, and Lin Jia, designer. After our initial research into history and analysis, we spent a week creating layered maps of four mixed development projects in Shanghai. Halfway through the project we had a project review, and critiques showed that although people agreed with our lack data and analysis, they weren't convinced on the actual research itself. We needed to communicate the concept of researching interstitial spaces and explore the users of the spaces themselves.

So we set out to interview and document users of the highly successful Xintiandi development where Gensler's office is located through video interviews, timelapses, and observations. Our last week was spent synthesizing, compiling, and editing all of our research into a final presentation that was given to the entire Shanghai office. The discussions that followed generated excitement and interest among many directors and managers, creating anticipation for the final research presentation in 2014. 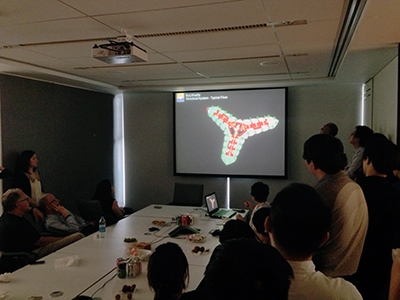 Living in Shanghai is much like any other major city: space is limited. Many people live in very close quarters and the average apartments size is 250 sq.ft. (dorm size). I was fortunate enough that my grandfather invited me to stay at his place during my internship. This allowed me to live closer to the city and experience Chinese family culture and the relations between local people on a daily basis. I spent most of my weekdays from sunset to nighttime either at Gensler's offices or experiencing Shanghai. Commuting is very easy with Shanghai's amazing subway system and cheap cab fares.

If there is one thing that a foreigner needs to learn about business in China it is the concept of guanxi. Guanxi can be thought of as the system of networks and relationships in business. It's quite important to be aware of the concept of guanxi, as there are many opportunities and connections to be made by building one's own guanxi. For certain deals, shaking hands over drinks at a social dinner among a network of partners, family, and friends is often more powerful than inking signatures over a brief coffee. 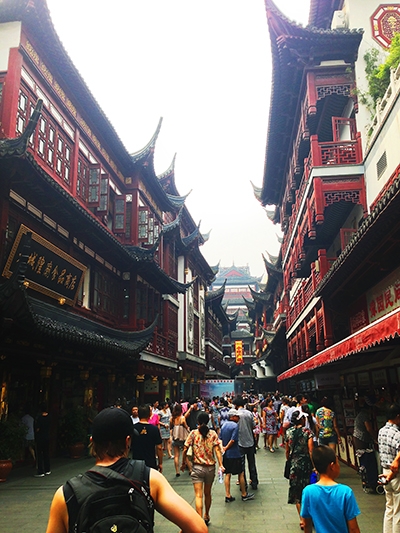 A social issue that caught my eye was the gentrification which sits at the crossroads of ecology, architecture, and social policy. Many areas still face gentrification due to new development, and the government relocates residents or offers a housing unit and/or financial compensation if a residential building is being built nearby. It is a grey area due to many families being given housing during the Cultural Revolution (1966-1976), so there is no clear ownership or regulations. Some houses are in fact Art Deco, Spanish style, or traditional Chinese architecture that were divided up to house dozens of families. I hope to travel back to Shanghai in the future and see these buildings preserved or at the very least unchanged.

When it comes to food in Shanghai, you can find almost any type of cuisine or produce. To me the best food is street food and the local’s favorites or local’s cooking because it is authentic and culturally immersive. The prices are quite cheap; you can grab breakfast on the go, a set lunch, or late night dumpling soup for a few dollars. Shanghai also has many world-renowned restaurants, bars, clubs, and they even have a few microbreweries. It was memorable to experience Shou Ning Lu road, where you can find hundreds of restaurants selling all kinds of seafood (famous for their crawfish), Chinese barbecue, and even grilled snakes. 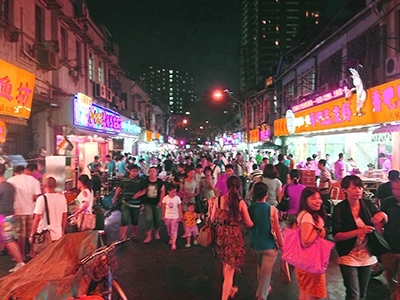 The nightlife in Shanghai is unimaginable on many levels. The city simply does not sleep. There are endless amounts of activities ranging from early night Tai Chi in the park to karaoke sessions that go well into the morning hours. Every weekend I set out to meet as many designers, artists, musicians, DJ’s, and people involved in all kinds of projects as I could. There are countless galleries, studios, and spaces to visit. The historical architecture in the French Concession area is astonishing. Pudong's futuristic skyline instills feelings of a dystopian reality when you realize that the Shanghai Center topps out at 2,070 feet and 135 floors and is surrounded by many other skyscrapers.

Leaving Shanghai after seven weeks felt like being torn out of a movie. Living among 25 million people in an urban world of metal and glass shooting towards the sky feels nothing short of dystopian. Everything in the city constantly changes and moves, fast. My mind shifted gears rapidly and changed to the Shanghai pace of life, but as the gears of the plane touched down on Michigan soil I snapped back into a familiar place with a brand new perspective.