In 2012, Yohan Daza was ready to leave life in the U.S. behind. Discouraged by the pervasive discrimination against Latinos he saw across the country and in his own community, Daza was making plans to move his family back to his native Chile when a TV news story changed the course of his life.

The story concerned a pair of girls who had committed suicide after experiencing excessive bullying at school. They were just twelve and thirteen years old. As Daza considered his own pain, he realized that it stemmed from the cultural bullying inherent in racism, and he was struck by the thought that the young girls must have felt a pain even greater than his.

In that moment, Daza formed a new plan.

“I realized that I’m an adult. I can handle myself and I can handle this anger, but these kids – they can’t,” said Daza. “I knew they needed help.”

Daza brainstormed about what he could do, and as an artist, his first instinct was to create. He sat down at his computer and designed a simple, yet powerful logo of a clenched fist paired with the question all targets of bullying ask: Y Do You Hate Me? 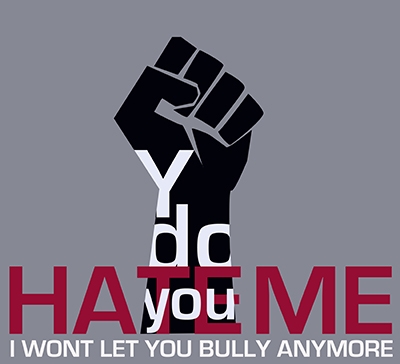 The Y Do You Hate Me? logo

“It’s part of human nature to want to dominate, but there’s another way to win in life than trying to be superior,” said Daza. “I knew I had the skills to take this idea to the next level, to take an anti-bullying campaign online.”

Fast-forward to 2013, and Y Do You Hate Me? has grown into a bona fide anti-bullying movement. Teaming with illusionist and youth-success coach Jeff Veley, Daza has created a powerful and far-reaching brand that’s communicated through web and social media outlets, adult training sessions, and interactive live events.

Through these mediums, Y Do You Hate Me? teaches kids the coping skills to not only deal with bullying, but to help reverse the cultural constructs that enable bullying in the first place. 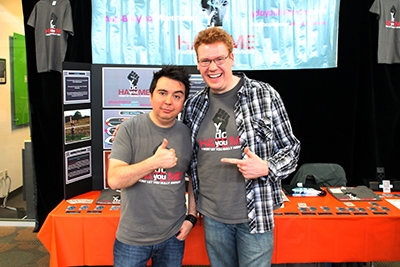 “If we teach the Golden Rule, we can actually change the world,” said Daza. “Our idea is: If I constantly treat you nicely, regardless of what you’re saying to me, I’m going to change your behavior.”

Often, the kids who suffer from bullying the longest are those who feel as though they can’t talk to anyone about it. However, Daza has found that incorporating music from his electronic rock group, Symphony Under Attack, into the presentations helps to open up the dialogue.

“If I approach a kid and just start talking about this, it doesn’t work,” he explained. “For me, music is a door between myself and young people where we can communicate.”

Daza and Veley also provide training sessions for teachers, school counselors, and mental health professionals, teaching them to recognize signs of bullying and giving them effective techniques to deal with the situation.

“The more people we equip, the faster the message of the program spreads,” said Daza. “That’s the whole idea.”

The pair’s anti-bullying message is spreading quickly. World Peace Ambassador Dr. Clyde Rivers honored the organization in May of 2013 with the Golden Rule International Award and offered Daza and Veley the chance to speak to the United Nations about bullying, which they plan to do in the near future. 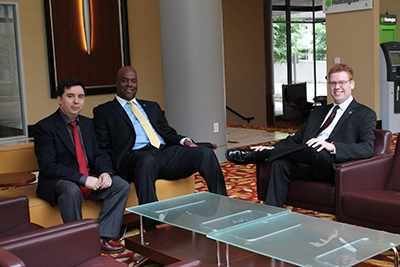 Daza is also bringing the message of Y Do You Hate Me? to ArtPrize, the annual art competition in Grand Rapids, Mich. His entry in the contest is a sculpture of a student sitting at an old school desk. On the student’s face are written many of the words bullied children often use to describe their pain, including “sorrow,” “fear,” “intimidated,” and “abuse.”

The process of creating the sculpture wasn’t an easy one. As if through some sort of cosmic fate, the piece came to represent the issue of bullying in an even deeper and more profound way than Daza had initially anticipated.

“I was creating this person, and the head broke just like a kid would break from being bullied,” said Daza. “I had to spend a lot of time trying to repair it with bandages. I’m doing an art piece, but it’s duplicating real life. We’re trying to teach people how to apply bandages to a real person.” 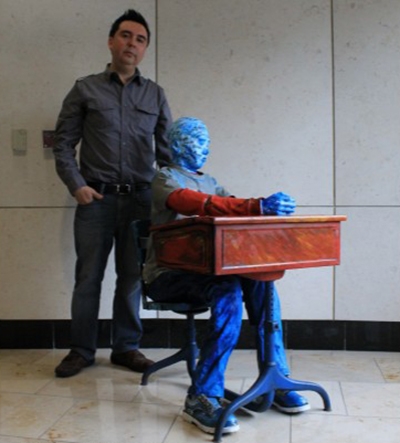 Stories like Yohan Daza’s remind us that it only takes a spark, one dynamic moment of creation, to change the world.

“With Y Do You Hate Me? I get to do music, video, illustration, and graphic design,” said Daza. “Everything I learned at KCAD I’m using in the movement. I feel like I’m using all the skills they gave to me to help other people.”