I love to find the origin of idioms, so when I heard that the next exhibition in the Kendall Main Gallery was “Spinning Yarns: Photographic Storytellers,” I knew I was in for a storytelling treat for the eyes.

At the February 16 Gallery Talk, curators of the exhibition, Anne Leighton Massoni and Libby Rowe spoke about their experiences curating “Spinning Yarns.”

Like a yarn, the origins of “Spinning Yarns” is a story in itself. Massoni and Rowe had each individually toyed with the idea of curating a show of photographic storytelling. For two years they, along with Kendall Gallery Director Sarah Joseph had considered the possibility of assembling a show, until they joined forces—Massoni and Rowe curating together, and Joseph offered Kendall’s galleries as the first stop in a planned five-year tour. Kendall also produced a beautiful and colorful catalog that will accompany the exhibition on its national, and possibly international journey.

Needless to say, Massoni and Rowe were thrilled to see their show become a reality, and excited with the enthusiastic audience for their gallery talk, which began in Gallery 114, then moved to the Kendall Gallery.

One unique aspect of the show is the lack of titles beside each piece. Instead, a small number, which corresponds to the listing in the back of the catalog, is mounted near each piece. Massoni and Roweexplained that the purpose of this was to let the viewers’ imaginations allow them to create their own interpretive story being told in the photograph, before reading the artists’ title. 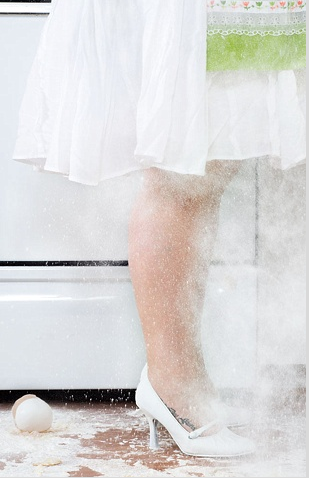 And by the way, I found two possible originations of the phrase spinning yarns. One claimed that it was originally a nautical term, meaning "to tell a long and often fantastic story for amusement." Telling a story was thus compared to spinning out a long hank of woolen yarn for making ropes.

The second, basically agreed that to "spin a yarn" is to tell a tale, but brought the origination ashore, stating that in the old days, women used to spin yarn on spinning wheels. They frequently did this in groups and, to pass the time, they often told each other stories. In time the words came to mean the production of the stories themselves.

So to conclude this yarn, you need to see this exhibition, which runs through March 12, to get the full story. More information about the artists and their work may be found at the exhibition website: Spinning Yarns