Blog Series: The Fashions of The Opera

Students in KCAD's Pamella Roland DeVos School of Fashion are blogging about their experience creating costumes for Opera Grand Rapids’ production of “The Student Prince,” a lighthearted operetta coming this June.

After a semester-long collaboration filled with research, brainstorming, designing, and constructing, KCAD Fashion Studies students finally unveiled the garments they helped create at the Ballads & Brews event, held at the Goei Center in Grand Rapids this past June.

After enjoying some food and drink, attendees took in an exclusive preview performance of the student Prince and got their first glimpse of the teal and red dresses the KCAD students had designed and helped construct for the play’s barmaid characters as well as the scarves they designed for the fraternity brother characters.

“I’m thrilled that ‘The Student Prince’ featured many talents from our community, such as original costume designs from KCAD students,” said Opera Grand Rapids General Director Anne Berquist. “The students also incorporated some of their ideas into the Ballads & Brews event.”

The designs were again showcased during the main run of “The Student Prince,” performed on June 9, 10, and 12 at St. Cecilia Music Center.

“Collaborating with the Grand Rapids Opera was a terrific experience. It was amazing to see how our designs and ideas as a class could translate so well to such a large scale,” said Fashion Studies student Madeline Kroll, who was offered and has accepted an internship with Opera Grand Rapids in the wake of the collaboration. “In most of our classes at KCAD we can see our own vision manifested in our own personal projects, but this was a great experience not only designing for so many roles, but designing as a team as well. It was truly inspiring how easily we were able to put aside our own aesthetic preferences to work toward the bigger picture of the production.”

Check out the photos of the preview performance below for a closer look at the final designs, and see more photos here. 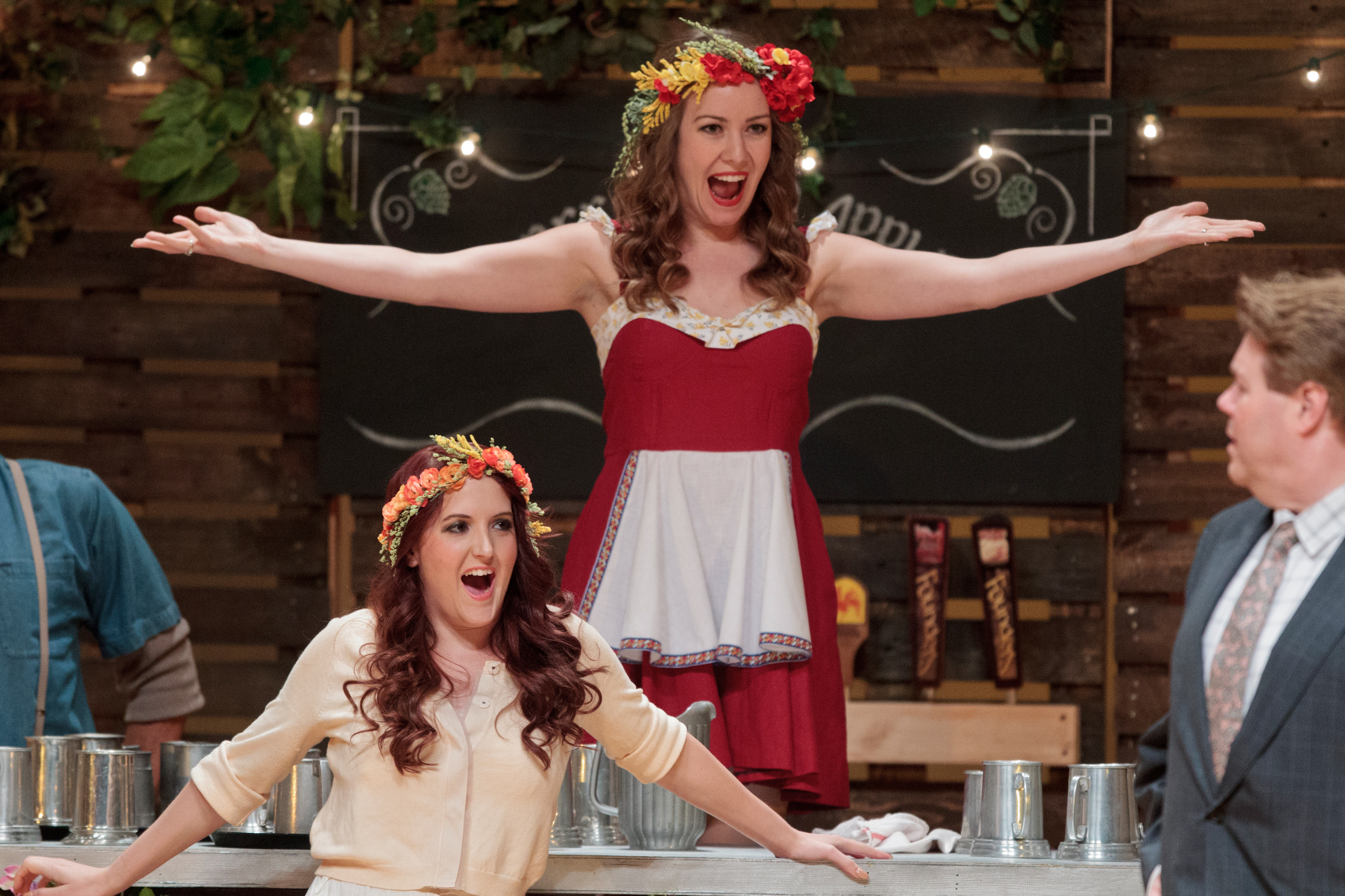 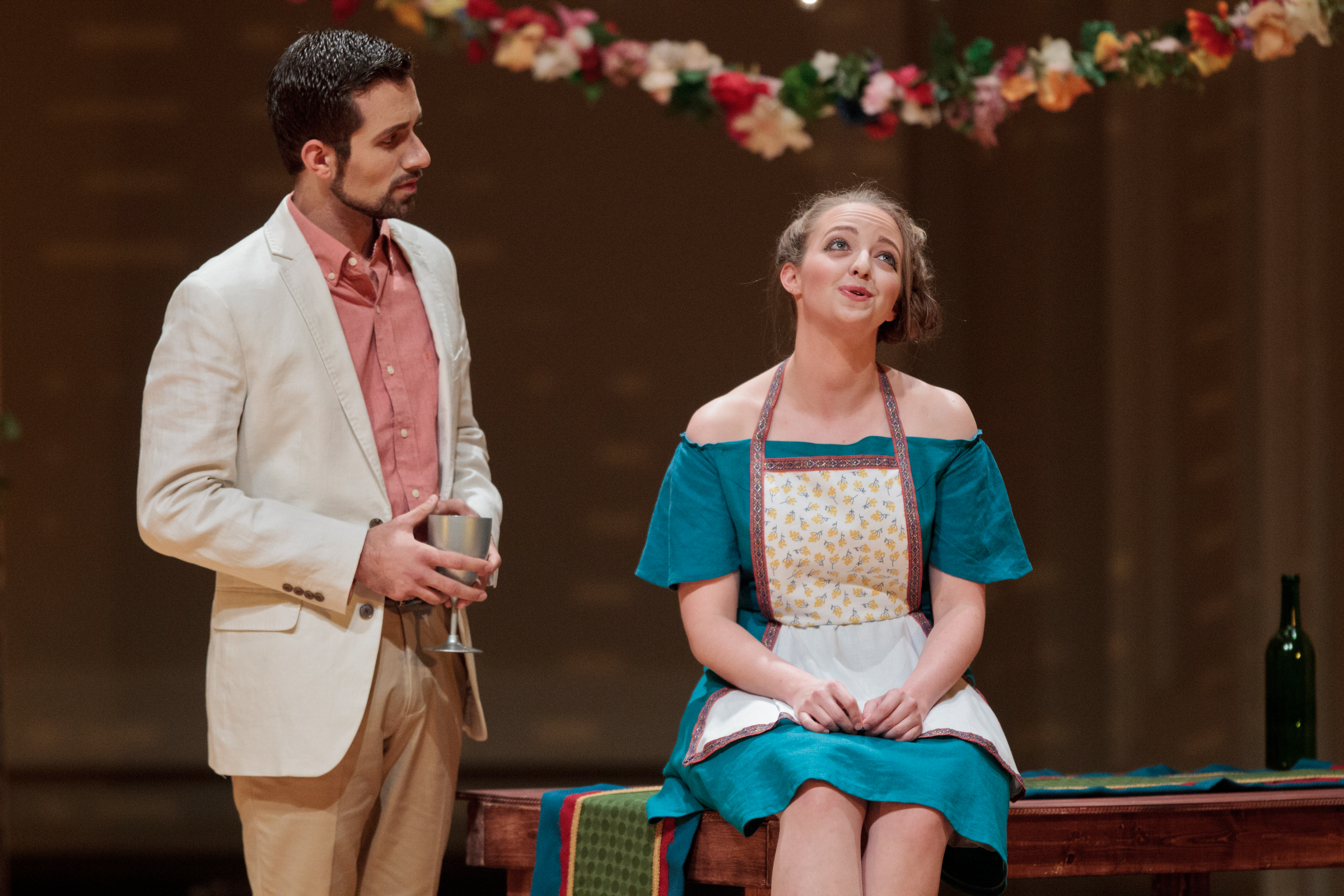 
Opera Grand Rapids is kicking off their production of “The Student Prince” with a fun celebration of German heritage and West Michigan craft beer. The event, Ballads and Brews, will be held at The Goei Center (818 Butterworth St SW) on June 2 at 5:30pm. This special evening will feature traditional German cuisine, festive entertainment, beer pairings from Founders Brewing Company, and an exclusive preview of “The Student Prince” from the production’s cast.


As this operetta has a strong Bavarian influence, guests are encouraged to don their best Bavarian Chic attire. Since KCAD Fashion Studies students have been collaborating on this production for several months, we were asked to help Opera Grand Rapids educate guests by answering the question, “What is Bavarian Chic?”

For women, the Bavarian Chic style is laden with embroidery inspired by traditional Bavarian folk art. A flowy white blouse or a cropped jacket with embroidered details would be a great way to incorporate the style. The silhouette of traditional Bavarian dresses, called dirndls, includes a cinched waist and a full skirt, a flattering look that can be easily modernized and updated to today's fashions. For modesty, women would usually layer a white blouse underneath their dirndls, which had a low-cut square neckline. Embroidered or intarsia-knitted sweaters and wraps are a great option for a third layer, while lace-up heels or clogs would be fashionable footwear options.

Men's "Bavarian chic" style should be inspired by traditional lederhosen and incorporate touches of folk-art florals and embroidery. A modern take on Bavarian dress could include a button down shirt with a botanical print, a vest or suspenders, or a simple pair of shorts and boots. Men who want to take the look further could add a pair of knee socks to complete their look!

As we continue our collaboration with Opera Grand Rapids, our next steps will be sourcing materials and working to create some original costumes for the upcoming show. Stay tuned!

More details on Opera Grand Rapids’ Ballads and Brews event can be found here. You can also purchase tickets to the event via this link.

This week we presented our costume illustration concept boards for each character in “The Student Prince” to Opera Grand Rapids team members Ann Berquist, Ashley Roberts, Angela Frier, Juliana Kartsimas, and Scott Skiba. We’ve modernized historical Bavarian men’s and women’s fashions, keeping in mind the attributes of each character with the aid of our scripts.

(above): student Taylor McCoy presents her design concepts; (below): a closer look

One group presented costume concepts for the main male lead of the operetta, Karl Franz, and his fellow fraternity brothers, acknowledging the need for Karl to be distinct from them. The designs included a sash that would be placed across Karl so the audience could identify him as royalty. The group also created analogous designs for the fraternity brothers that could be used interchangeably by the large group of characters. The designs eluded Bavarian influence by featuring a stark stripe across the front of the boys’ polos that would incorporate their school colors.

Keeping these same ideas in mind for the female student characters, another team created designs for the lead female character Kathie and her fellow sorority sisters. The costume for Kathie and her flamboyant co-worker Gretchen were designed with the most Bavarian influence, given that they work in a Biergarten. The sorority sisters’ costumes, on the other hand, had a more neutral look and featured identical floral headpieces to unify the characters as a group so they won’t overshadow the primary characters.

It is important for us as designers to know that the audience needs to easily recognize each character. One way to distinguish characters from one another is through the use of color, keeping major characters in the forefront with more vivid colors and using more neutral palettes for minor characters and chorus members. We also needed to make sure that we fulfilled any costume requirements that are referenced in the script, such as the blue color of Kathy’s dress in one act or the need for a token that Karl Franz gives Kathy that has to be a symbolic part of his fraternity wardrobe throughout the production. We discussed the idea of using a kerchief that Karl Franz would wear before giving it to Kathie as a token of his love for her.

Opera Grand Rapids was very pleased with our work as a whole, which is exciting for our team of designers. The KCFS 320 class will happily await final feedback from the Opera before getting into the construction phase. Stay tuned!

After our initial meeting with Juliana Kartsimas, the production manager of Opera Grand Rapids, our groups have been brainstorming, researching, and sketching various ideas for our assigned characters. In keeping with the contemporary Bavarian-inspired theme, we’ve created color schemes and pulled inspirational photos to come up with a cohesive palette and design for the costumes.

(above and below): students created mood boards to begin brainstorming possible color and style options for the costume designs

Later on in class, we had several groups present color palettes and the inspiration behind them. One group, which will be designing the costumes for the fraternity and sorority characters in the production, was inspired by the Bruegel painting “Netherlandish Proverbs.” The class as a whole gave feedback on what option would be most successful.

Another group, tasked with designing the costumes for the royal family characters as well as the characters that are a part of a ballroom scene, presented their color palette that was inspired by the painting technique known as tenebrism and the contemporary paintings of Yves Klein. There were several ideas that the group had to consider before giving some constructive criticism.

We’re finalizing our designs to prepare for our next meeting with the production manager and the artistic and stage directors. We will be presenting our design boards and proposing several different design options for each character’s costumes in the production. We look forward to getting feedback from the Opera.

Our class will continue to share updates on this exciting project and partnership - stay tuned!

This semester the Fashion Studies Costume Design class (KCFS 320) is enthusiastic and excited for the wonderful opportunity to be collaborating with Opera Grand Rapids, an organization founded in 1967 that is the only professional opera company in West Michigan. Our class, taught by Adjunct Professor Stephanie Wood, will be designing costumes for each character in the operetta, “The Student Prince,” which will be presented June 9, 10 and 12 at St. Cecelia Music Center.

“The Student Prince” is an iconic operetta written in the 1920’s and set in a fictitious 19th century Bavarian country. Opera Grand Rapids, however, will be giving the production a modern twist, playing off of the story’s connection to our city. “The Student Prince” is a beer infused, lighthearted love story, making it a perfect operetta for Grand Rapids (aka Beer City, USA).

So what is an operetta? An operetta is typically shorter than an opera and features a modern theme that is comical and less serious in nature than those found in operas, which are usually tragic. Operettas have characteristics of both a musical and an opera, and thus could be considered as the beginning of the modern musical as we know it today.

Operettas also incorporate spoken dialogue in between musical segments, whereas operas are performed entirely in song. It takes a seasoned and skilled performer to sing in an operetta or opera. No microphones are used in these performances, so the singers must train their voices to be loud enough to project across the entire audience.

We learned about the different characters in “The Student Prince” together

Our costume design experience officially began on February 8, when Juliana Kartsimas, the production manager of Opera Grand Rapids, joined our class to discuss the show’s costume plot, brainstorm ideas, and answer any questions we had about the process. As a class we will be working in teams of two to design costumes for specific characters in “The Student Prince”. Our class will have the opportunity to not only design some of the costumes, but to create them as well.

We have to keep certain things in mind throughout the process, from each character’s background to the setting of the story to the quick costume changes that will be required backstage. But most importantly, it’s our responsibility to make sure the costumes reflect a contemporary Bavarian-inspired style that will complement the modern beirgarten setting that the Opera Grand Rapids artistic team will be creating.

Our class will continue to share updates on this exciting project and partnership - stay tuned!