The Parable of the Talents

In college-level design drawing, where first-year students become able to render complex geometric forms using their hands and eyes only, without the aid of any mediating technology (straight-edge, protractor, or compass), the work of a typical student will look like this: 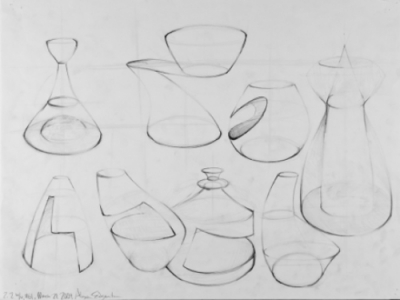 So I show them the student's first drawing in the class. 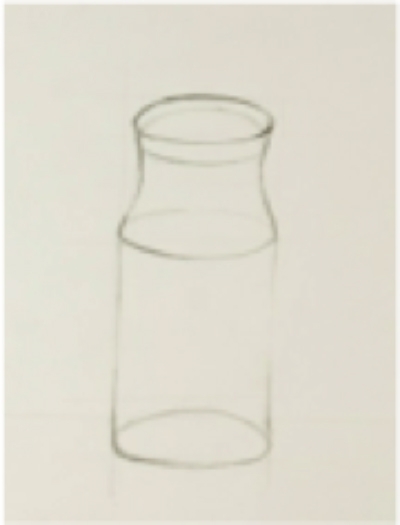 "I will never be able to do that" is not a response I ever hear.

Perhaps for the student to traverse the distance between point A and point B, she had talent. But here is your question: if all you were shown was the first drawing, would you have thought the student was "talented"?

Like the skill of the beginning designer who is hand rendering, every "talent" has a more modest beginning. Scientific reasoning, for instance, begins in the simplest kinds of inquiry about the world and the formation of ideas from experience. Ever hear someone say that they tried something and didn't like it? The N may only equal one, but they have used scientific method -- creating a testable hypothesis from experience. If that person tries the same thing again and still doesn't like it? That is validation of the original hypothesis. That person is building STEM capital for later forays into consumer decisions or quantum physics.

Those traits or skills we see as so rare and precious are, in reality, grounded in the everyday actions of people. When they become refined, those particular thought processes are elevated to a higher status without consideration of where they come from.

If you've ever taught college composition, you know how resistant many students are to research. But have you ever considered the research they already conduct in their everyday lives? Back in the pre-smartphone era, when telephone wires held the world together, I taught research as part of my first-year comp class. I would ask my students if they'd ever looked up the phone number for a pizza place. That's research. Had they told someone where they found the number? That's citation. I would tell them that because of those experiences, they also knew why we practice research and citation: to find out information we need and to tell other people where they can find it. In other words, they could conduct research in the academic world because they had already done it in the real world.

Sir Ken Robinson claims that everyone is "creative" because everyone has solved a problem, and problem solving is "creativity." But we fail to notice the beginnings of talent in ordinary places. Play, for instance, is fertile soil for problem solving. Free play provides an open-ended exploration that fosters creativity. It provides the ground for all higher-level thinking on which problem solving depends. If we want to nurture strong intellectual development in a child, play (creative problem solving) is requisite.

But is non-free play, the play in sports, for instance, creative problem solving? Yes. Trained athletes epitomize problem solving and creativity in order to continually respond to unique and evolving conditions. Why don't we see it that way? Because we can't see what we are not looking for -- the talent developing all around us. We have effectively partitioned talent from its origins, the same way we hive off creativity into a specialized part of the world.

Many readers have thought that that the parable tells us not to hide our talent, our special skills. But really, it illustrates something else: the popular transposition in the minds of readers from talent as an inclination to talent as something of special value.

When connoting something of special value, talent is, like all valuable resources, distributed inequitably. But talent as inclination is available to all, and the act of leveraging this type of talent for the type that has a special value is what I call "talent development."

So what does this have to do with education per se?

Here is the story of why I teach: When I was in high school, I worked in a literacy project that tutored fifth graders. I was assigned a student who could not read his social studies text. In fact, he could hardly read at all. His teacher told me I was wasting my time because the child was mentally challenged. My first meeting was ear-bleedingly painful, listening to him sound out words syllable by syllable, so slowly that unless I had my eyes on the text, I would have mistaken those sounds for gibberish. I went home depressed.

Then I remembered that when I was first reading, I loved comic books. So I brought in a dozen various comics, not knowing his taste, and told him that he could keep them if he could read one aloud to me. With fewer words and a more approachable subject matter, he suddenly took to the task. In that moment, he became a reader, and eventually he was able to put down the comics and read his textbook.

As it turned out, he was not mentally challenged, but pedagogically challenged. Now you can say that I adopted a "learner-centered" model, but in truth I was centered on a single learner and used aspects of his abilities and his inclinations to leverage his learning. I developed his talent.

Teaching and learning are commutative. You can change their order without changing the result. A learning-centered teacher uses a different lesson plan but usually evaluates the results as they have always been evaluated.

Talent development is about leveraging the assets of individual students, starting from where they are and using what they already have.

I believe that if developing the talent of an individual is your job, you cannot apply the same evaluative principles and you cannot teach in the same way. You cannot mass-produce education. You can, however, teach the masses because you can be inclusive and you can help students find their own way through the material.

There are many people at all levels of education who are using their knowledge of talent development to create new models of learning and new paths to success for students. The future of education depends on our ability to aggregate that knowledge.

Next time, I will talk about how dispersed individual practice is not enough by itself and why we need a paradigm shift. Stay tuned.