While working as an intern for Tiger Studio during his junior year, Churu Yun (‘11, Industrial Design) found himself in an interesting position. Having proven his skill in approaching user interfaces from an industrial design perspective, Yun was picked to work on an important new project for the studio. The catch? A big red "CLASSIFIED" stamped on his internship file.

As it turned out, Tiger Studio had been tasked with helping one of its clients, Johnson Controls, design the instrument cluster for the 2014 Chevrolet Corvette Stingray, and the project was shrouded in secrecy.

"It was kind of crazy,” Yun said of working on such a high-profile project. “It was a top-secret project and I wasn't able to tell anyone about it, so if I seemed really tired in class, I didn't really have an excuse for it. It was challenging, but it was so exciting to work on it."

The project continued through his junior year and well into the summer following graduation, and Yun was not able to talk about it until after the car was released in early 2013. Today, Yun can finally reflect on the experience as one that inspired him to finish his undergraduate degree and launch his professional career. 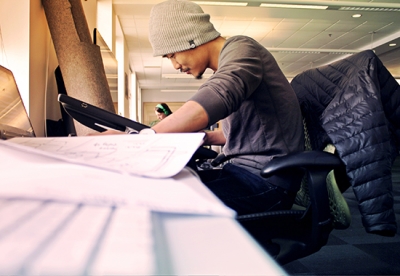 Always on the lookout for new design challenges, Yun sinks his teeth into a project

These days, with the Corvette instrument cluster in his rearview, Yun is out in Seattle working with Frog Design, an internationally recognized product strategy and design firm. His current work, which ranges from retail design to automotive design projects, has expanded his career into the arena of user experience (UX) and user interface (UI) design. Still, the veil of secrecy remains.

"The nature of what I do is such that I can't talk about it until three or four years after I work on it," Yun explained.

At KCAD, Yun was exposed to a multitude of experiences, ideas, and products that fed his passion for UI and UX-based design. His education also helped prepare him for the realities of working at a design firm.

"The design process and methodology I learned at KCAD prepared me for the rigor that we have when we design products for clients," he said. "KCAD was able to offer me insight into the kind of thinking and process you need to have to find solutions based on the market and user needs." 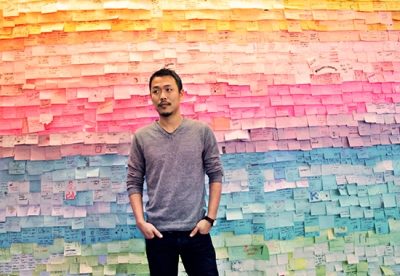 Design thinking, anyone? Like any good designer, Yun knows how to rapidly prototype and test solutions as challenges arise

Yun has long been interested in combining artistic design and product development. Growing up, he favored watching cartoons with robots over Tom and Jerry chasing each other around the screen. Before attending KCAD, he worked at an animatronics company that built humanoid robots for interactive exhibits and trade shows.

"I was exposed to building things from [people's] imagination that were applicable in the real world. That exposed me to the field of industrial design," he said. "When I saw examples of what it was, I instantly knew that was what I wanted to do."

According to Yun, industrial design students should embrace opportunities to diversify their work and immerse themselves in new challenges.

"When the right opportunity comes, don't be afraid to take it,” he said. “Treat every opportunity like it is a life changing moment. Don't half-ass it. Put everything you have into it and do it right."

Yun will be making the voyage back to KCAD on Tuesday, April 1 to participate in the Industrial Design program’s Career Day. He’ll be speaking about utilizing user experience to drive design, sharing more valuable post-graduation career advice, and participating in a portfolio critique.