For any creative person, the opportunity to have your work reviewed by an influential figure in your field is at once both exciting and terrifying. KCAD Graphic Design seniors have endured their fair share of critiques, but a recent visit from Martin Venezky, the mind behind internationally recognized design firm Appetite Engineers, proved to be unlike anything they’d ever experienced.

In the field of Graphic Design, the name Martin Venezky is synonymous with detail. His masterful eye for minutia permeates his work and has earned him a reputation as one of the most astutely observational and complex designers working today. He’s also a teacher who places the importance of exploring possibility and taking risks at the center of his pedagogy. 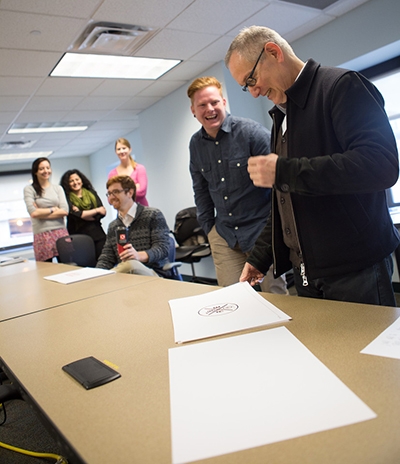 No stranger to whirlwind critiquing sessions, (the class he teaches at California College of the Arts typically consists of three straight hours of critique) Venezky wasted no time getting down to business, going through students’ portfolios one-by-one as the other students and graphic design professors looked on.

It was utterly fascinating to witness the dexterity with which Venezky identified the students’ strengths and weaknesses. He was quick to praise, but was quicker to express his frustration with what he saw as self-imposed limitations in the work.

“But did you try doing that?” he asked, suggesting one student try tweaking the perspective of an image in an advertisement she’d created. She replied that she hadn’t, causing a sly grin to spread across Venezky’s face.

“Well it might work, and it might not,” he said. “Who knows? The only way to find out is to try. Minor details give you an opportunity to try something interesting.” 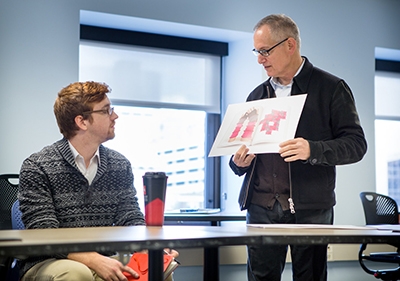 And really, what is great art if not interesting, engaging, and provocative? It’s easy to become attached to our creations, to coddle them as though they were children in need of our protection. But Venezky’s philosophy stressed commitment to the concept rather than the creation.

Another student had designed an artfully compelling logo, but had left it in a corner of the page amidst a sea of white space.

“What are you doing with it?” Venezky asked of the white space. “More importantly, what could you do with it? If you don’t like what happens, just hit delete. You owe it to the concept to try.”

Conceptual detachment stems from what Venezky calls “using the computer as a crutch, rather than a tool.” He repeatedly encouraged students to design their own fonts, take their own photographs, and create their own textures – anything that would get them more intimately involved in the creative process. While he didn’t deny the importance of technology to graphic design, he was quick to point out the difference between simply learning the latest technology and learning how to learn technology. The latter purposes technology as just another tool in the graphic designers toolbox. 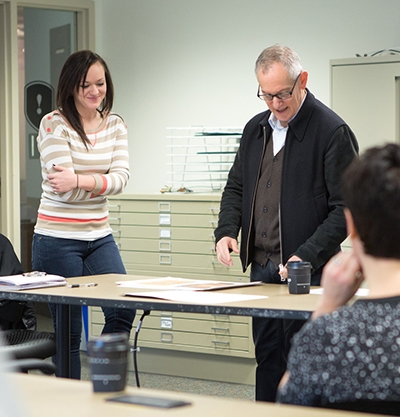 As the critique wrapped up, the smiles on the students’ faces were evidence of the tremendous amount of learning, growth, and inspiration that had taken place in a relatively short amount of time.

Like any good critic, Venezky did not hesitate to give credit where credit was due. He praised the students’ highly developed layout skills, and was extremely pleased to find zero evidence of gimmickry and affectation in their work. He was patient with each portfolio, and was able to give each one a fair assessment of what was working and what wasn’t.

“It’s especially useful to be critiqued by someone that we’re not used to interacting with on a daily basis, because you have to come to terms with the fact that you can’t hide the weakness in your work,” said Graphic Design student Abby Schmidt, whose portfolio contained an advertisement for Cheezits™ that Venezky praised for its ability to elicit an emotional response from the viewer. “But at the same time, when the good in your work is validated by someone of [Venezky’s] stature, it propels you forward.” 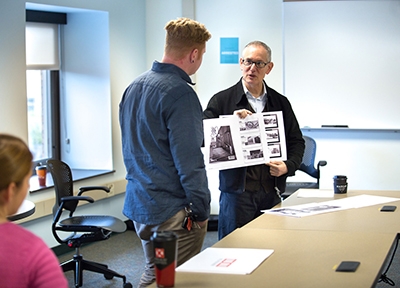 Graphic Design student Isaac Daniels echoed that sentiment, saying, “It’s so valuable to get that outside perspective. It felt much more raw and honest coming from [Venezky] than criticism sometimes does in the classroom, because everyone knows each other and that affects the way you interact. It feels good to know that there’s room for improvement, because that’s what keeps pushing you to grow.”

This is why Venezky teaches, and it’s also why he took the time to critique the work of students he didn’t know from a school he hadn’t been to before. Ultimately, he’s dedicated to moving the art of graphic design forward, and for him, the most effective way to do that is to develop self-criticism, experimentation and innovation in the students who will become the next generation of graphic designers, ready to shake things up as he has done himself.

In fact, Venezky’s approach to teaching applies equally to all areas of art and design. If innovation and impact are what we seek, then we cannot shy away from questioning our motives, approaches, and objectives, nor can we be afraid to take those leaps of faith that just may lead to the next big discovery.