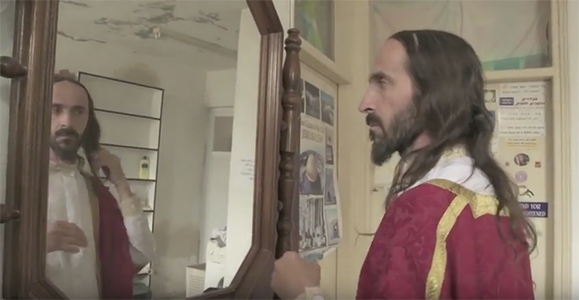 Join us in the galleries for a full screening of Katarzyna Kozyra's documentary film Looking For Jesus October 27th & 29th at 6:30pm

About the Film: Kozyra's starting point for this project was information about the so-called Jerusalem Syndrome, an acute delusional disorder which had been reported by medical professionals only in the 2nd half of the 20th century. After visiting the Holy Land, people afflicted with the syndrome start to identify with Biblical characters - mostly and usually with the Messiah. To date the artist has visited Jerusalem four times in order to find those, who in the early 21st century believe themselves to be Jesus. The result is a series of interviews with people from many different origins and walks of life, all of them subsequent prophets or Messiahs who try to convince the artist they are miraculous and genuine. Kozyra encounters incredible personalities. Each of her heroes hides a fascinating story, and all of them combined constitute a project presenting ways and means of carrying out one's faith, its place and role in today's world, and values on which we build our reality.