As much as West Michigan Design Week celebrates the vibrant design community of our region, the annual event is also proof that the strength of that community largely stems from its ability to look outside of itself for ideas and inspiration.

As with last year’s inaugural event, guest speakers were a huge draw for this year’s Design Week. After setting the bar extremely high last year with visitors such as TED conference founder Richard Saul Wurman, Cooper-Hewitt National Design Museum Deputy Director of Education Mei Mah, and Metropolis Editor in Chief Susan Szenasy, event organizers had their work cut out for them.

“This year, we really focused on bringing in people who continually push the boundaries of what a designer is supposed to be,” said Ken Krayer, a Kendall College of Art and Design of Ferris State University (KCAD)  professor and interim director of Design West Michigan who was part of Design Week’s organizational team. 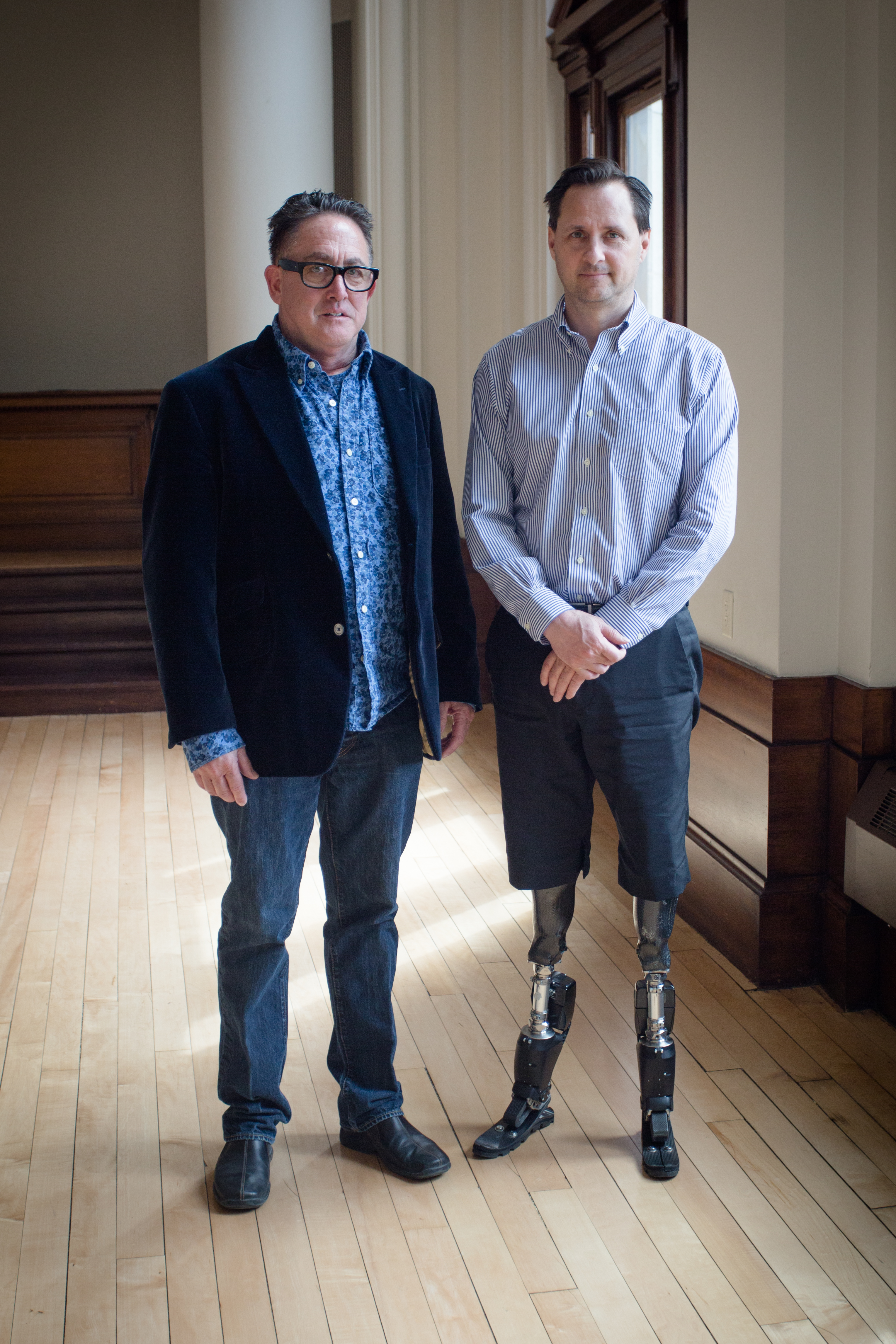 Herr kicked things off on the opening night of design week with a captivating presentation of the work he and his colleagues at the MIT Media Lab are doing to develop state-of-the-art bionic technology and merge it with the human body. A former mountain-climbing prodigy who became a double amputee after he suffered extreme frostbite as a result of a climbing accident, Herr now dedicates himself to developing smart prostheses that can replicate – and even exceed – the capabilities of biological limbs. 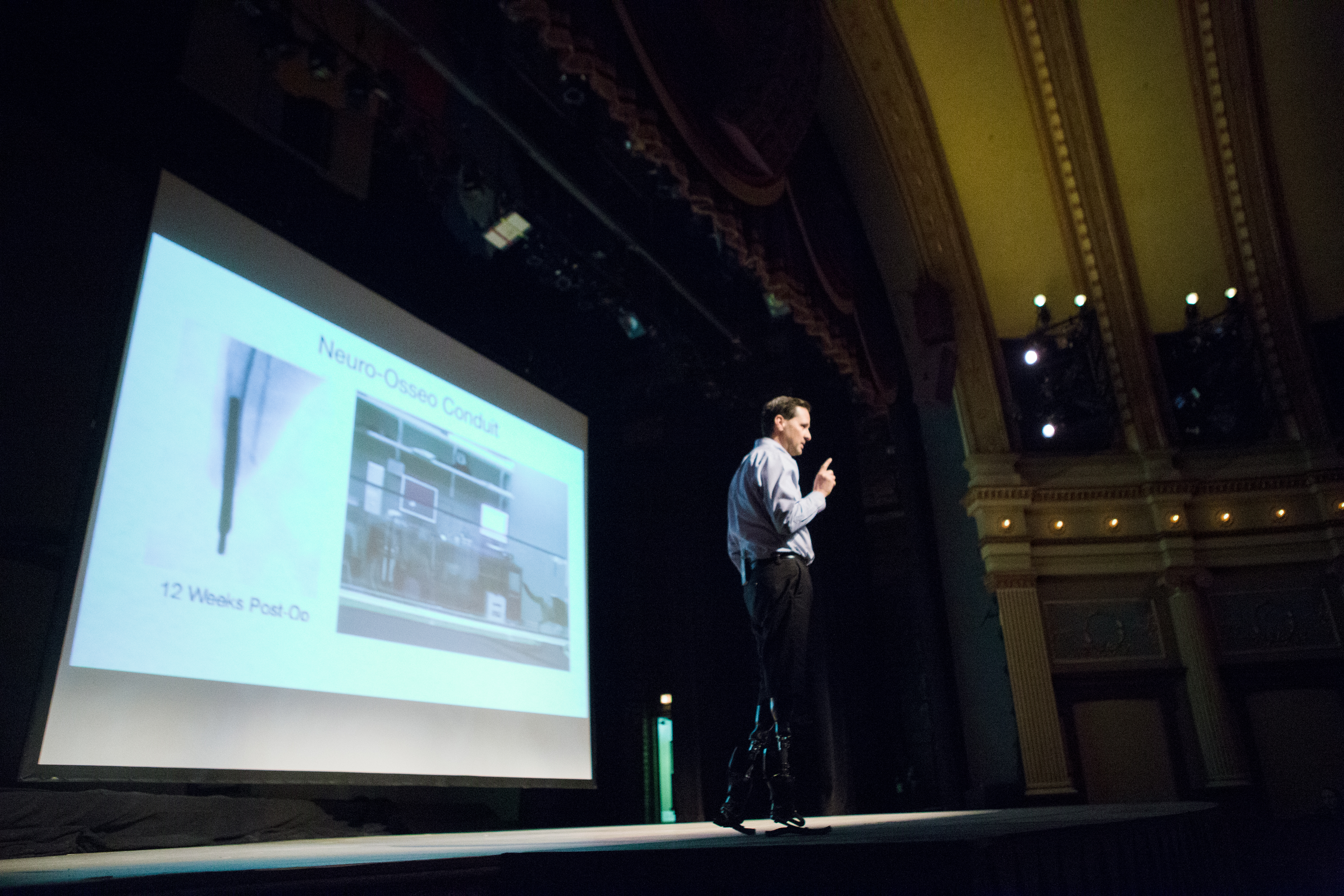 Herr onstage at the Civic Theatre for his keynote speech

In addition to showcasing his crowning achievement, the BiOM– an incredible ankle-foot prosthesis powered by biomimetic design that he wears himself – Herr also spoke about the transdisciplinary nature of the MIT Media Lab. Converging different disciplines, he said, is key to future success in not only biomechatronics, but every field. 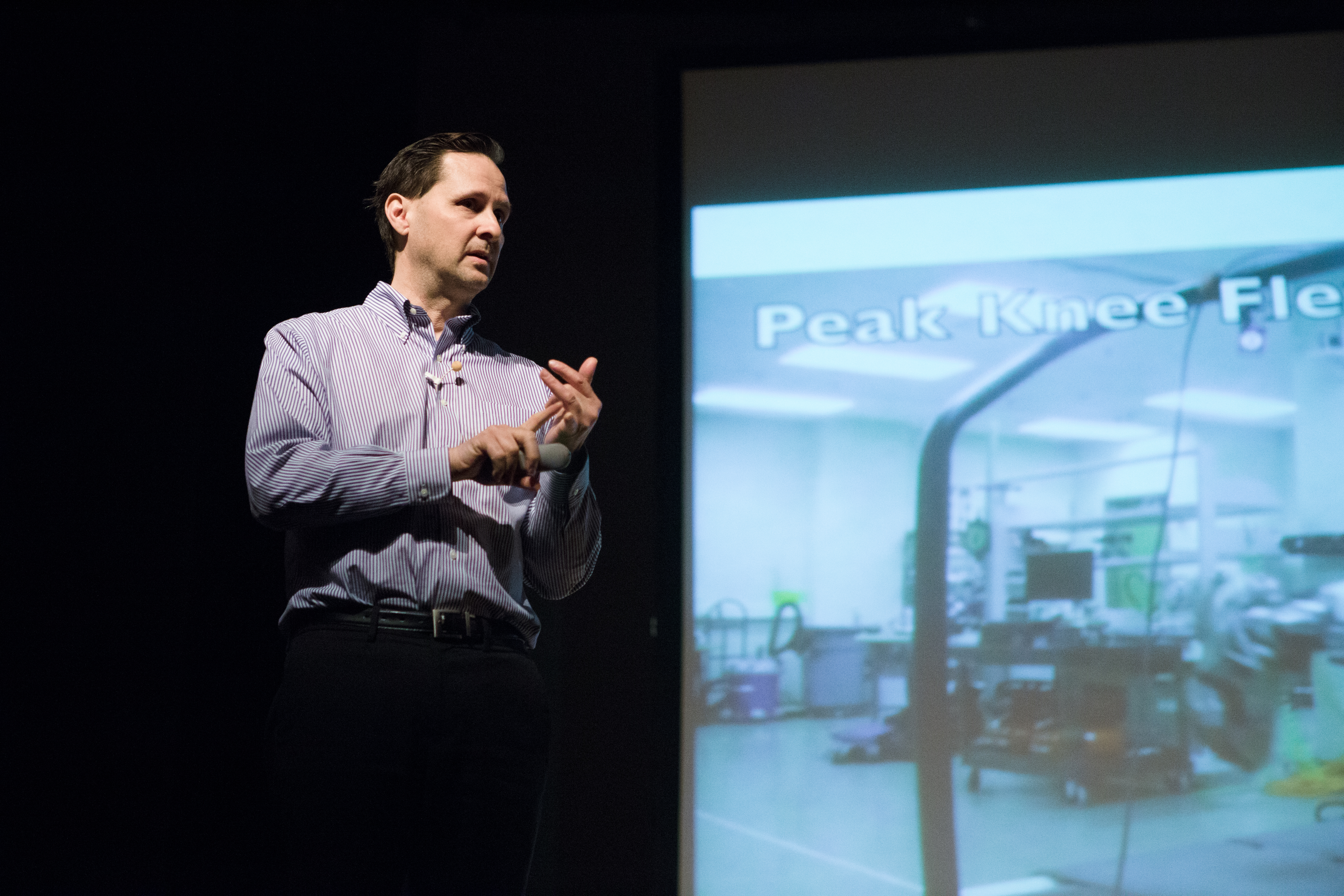 “So many of the biggest problems in the world exist between conventional disciplinary silos,” he said in his talk. “I believe strongly that we need to educate young people to think across different disciplines; that’s absolutely critical and I think it’s a property of a highly innovative society.”

The next night, Viemeister, who’s been called "industrial design's elder wonderkind" by ID magazine, led the audience on a winding, detour-filled journey through his 36 years on the cutting edge of industrial design. 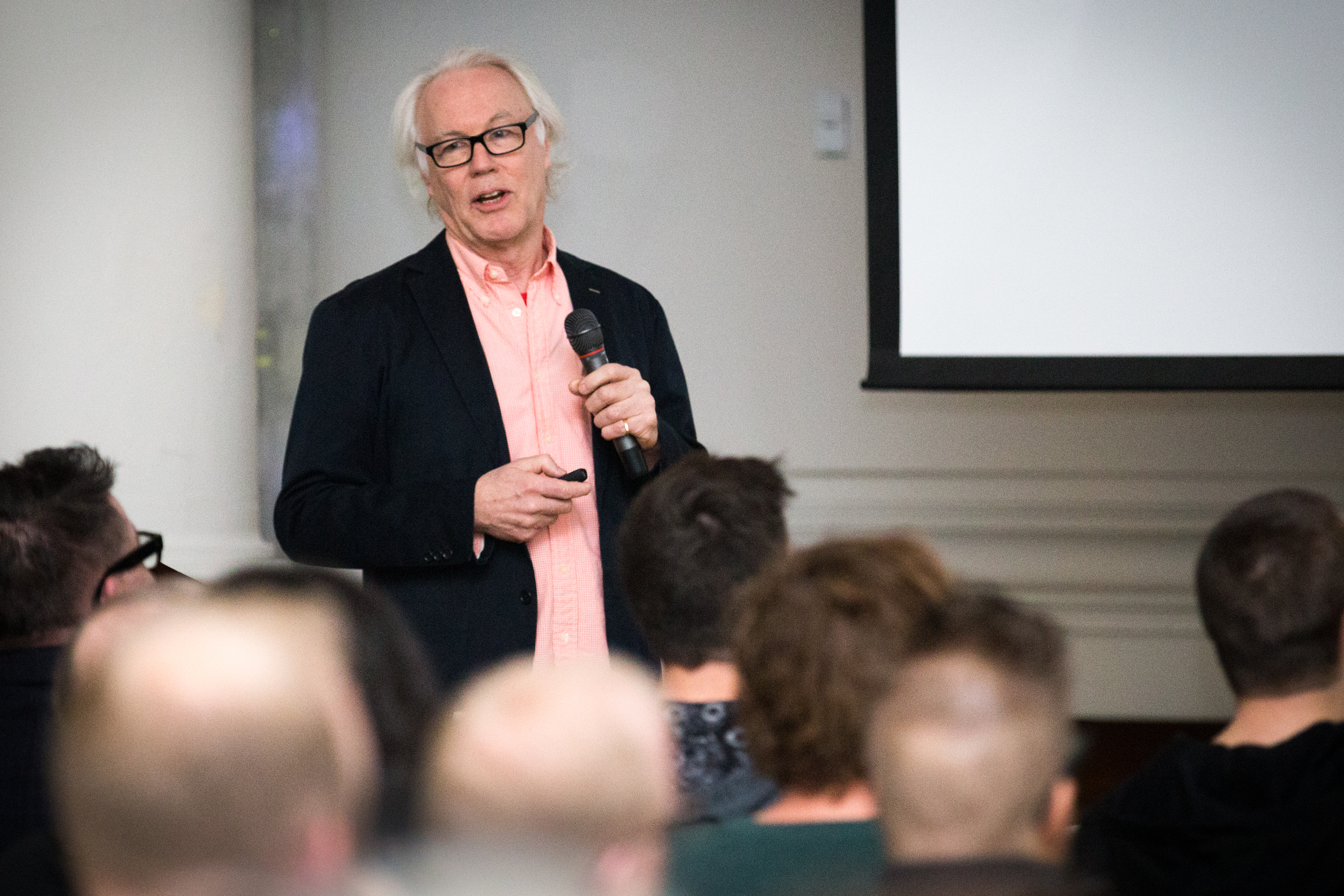 Born with design in his blood – he was named after the infamous Tucker Sedan that his father, also an industrial designer, was designing at the time of his birth – Viemeister holds 32 U.S. utility patents; helped found a number of influential design organizations, including frogdesign NY, Razorfish, Smart Design, and Springtime-USA; and was Chief of the LAB at Rockwell Group. 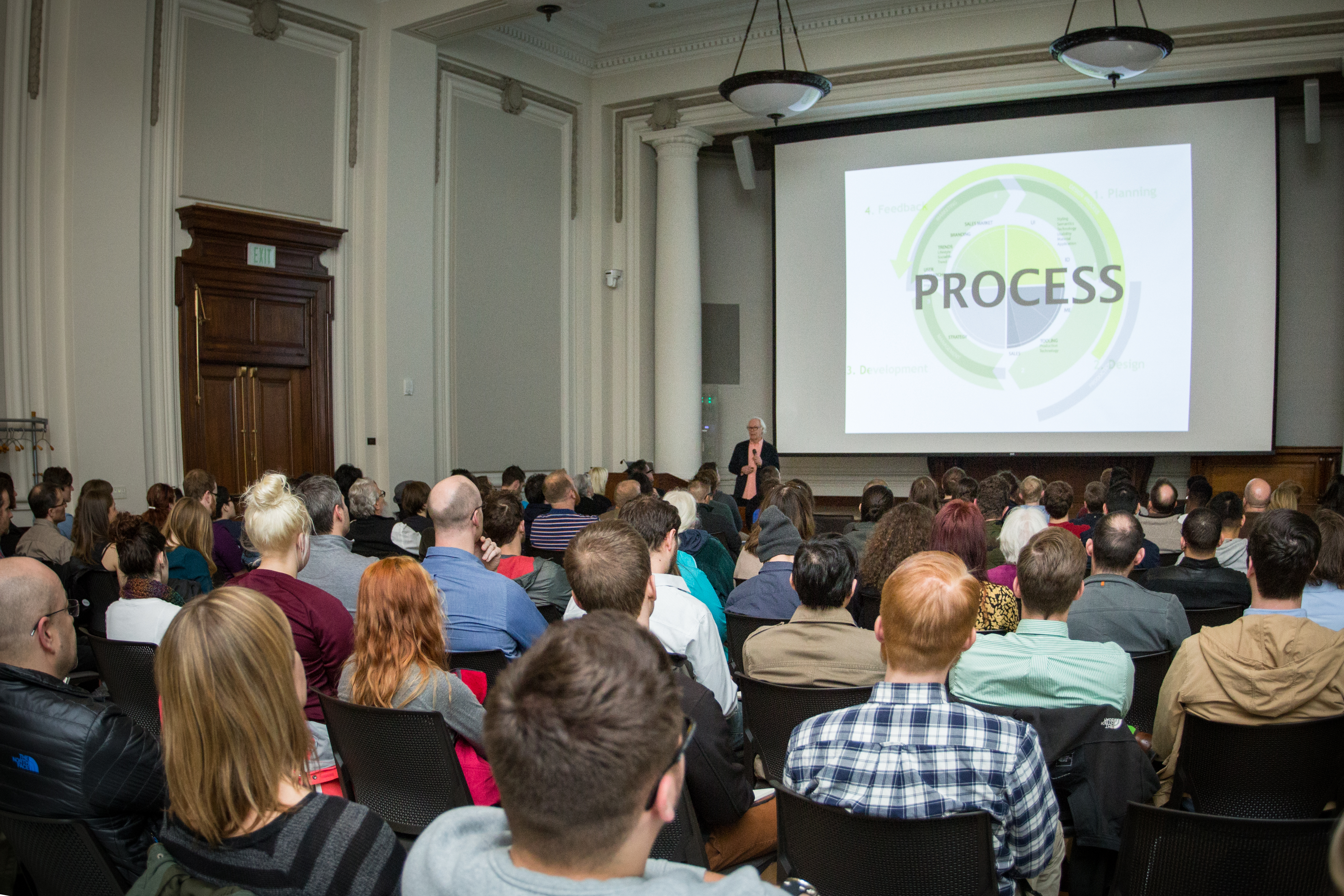 "I was thrilled to speak to a standing room crowd of keen design aficionados and KCAD students,” he said after his talk. “We are entering a new era of design and Grand Rapids feels like a place eager to take advantage."

Then, it was the graphic designers who were out in full force for the following evening’s AIGA West Michigan-sponsored talk by de Almedia. Originally from Brazil, the award-winning art director, design instructor, and self-proclaimed “type-nerd” talked about lessons learned on the path to what she called her “dream job” at WIRED. 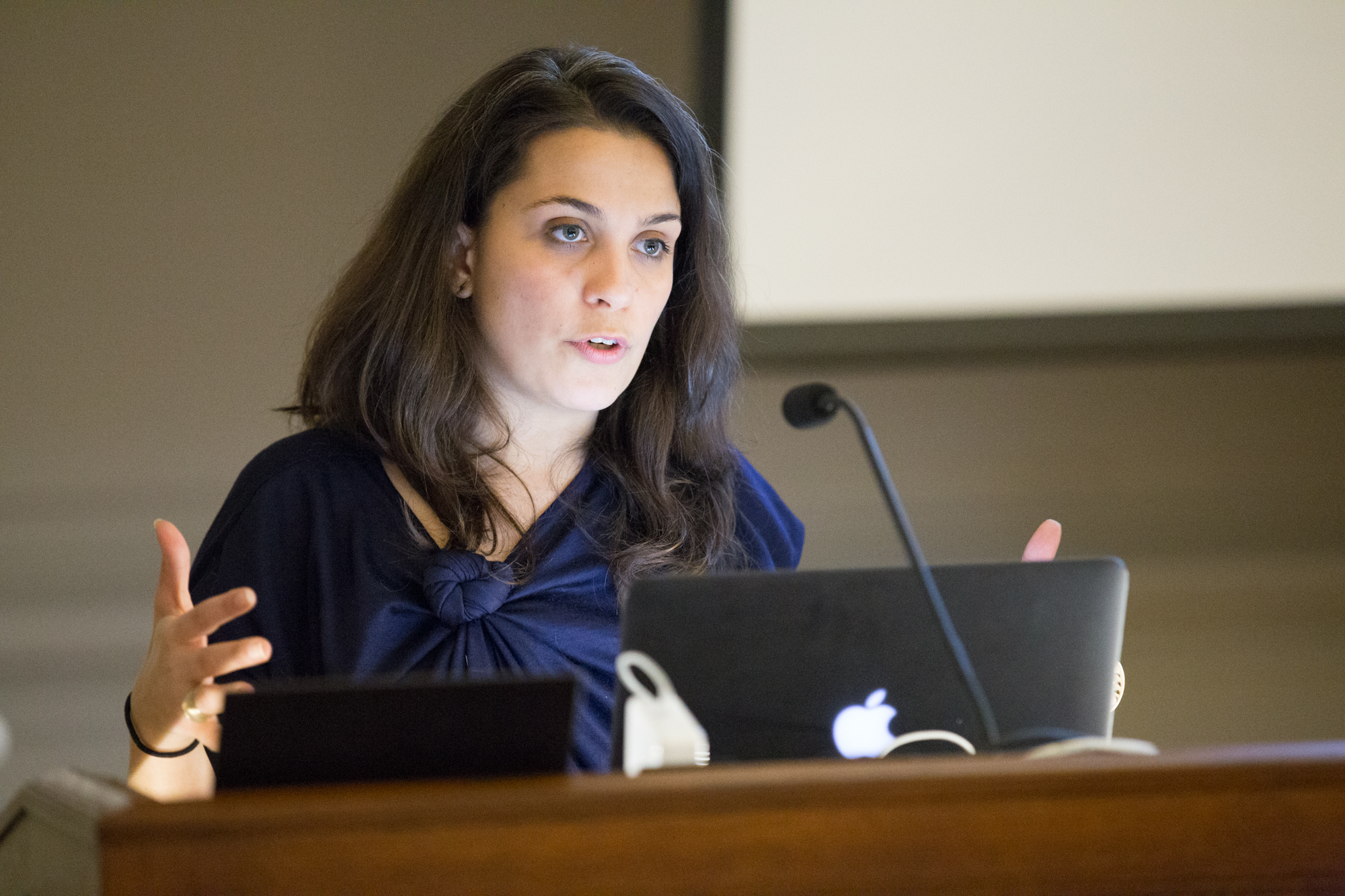 When she graduated from the School of Visual Arts in New York City, de Almedia was, like any designer fresh out of school, faced with the challenge of balancing personal passions with professional demands. “Something that’s important for students to figure out is how you can create a space for yourself where you can express your own ideas without threatening the voice of your project, your publication, or your art director,” she said.

Thanks to the support of AIGA West Michigan and the KCAD Alumni Association, de Almedia was also able to speak one-on-one with seniors in the Graphic Design program and offer them some valuable critique on their portfolios. She stressed that in most cases, graphic design must work in concert with other creative forms to be truly effective. 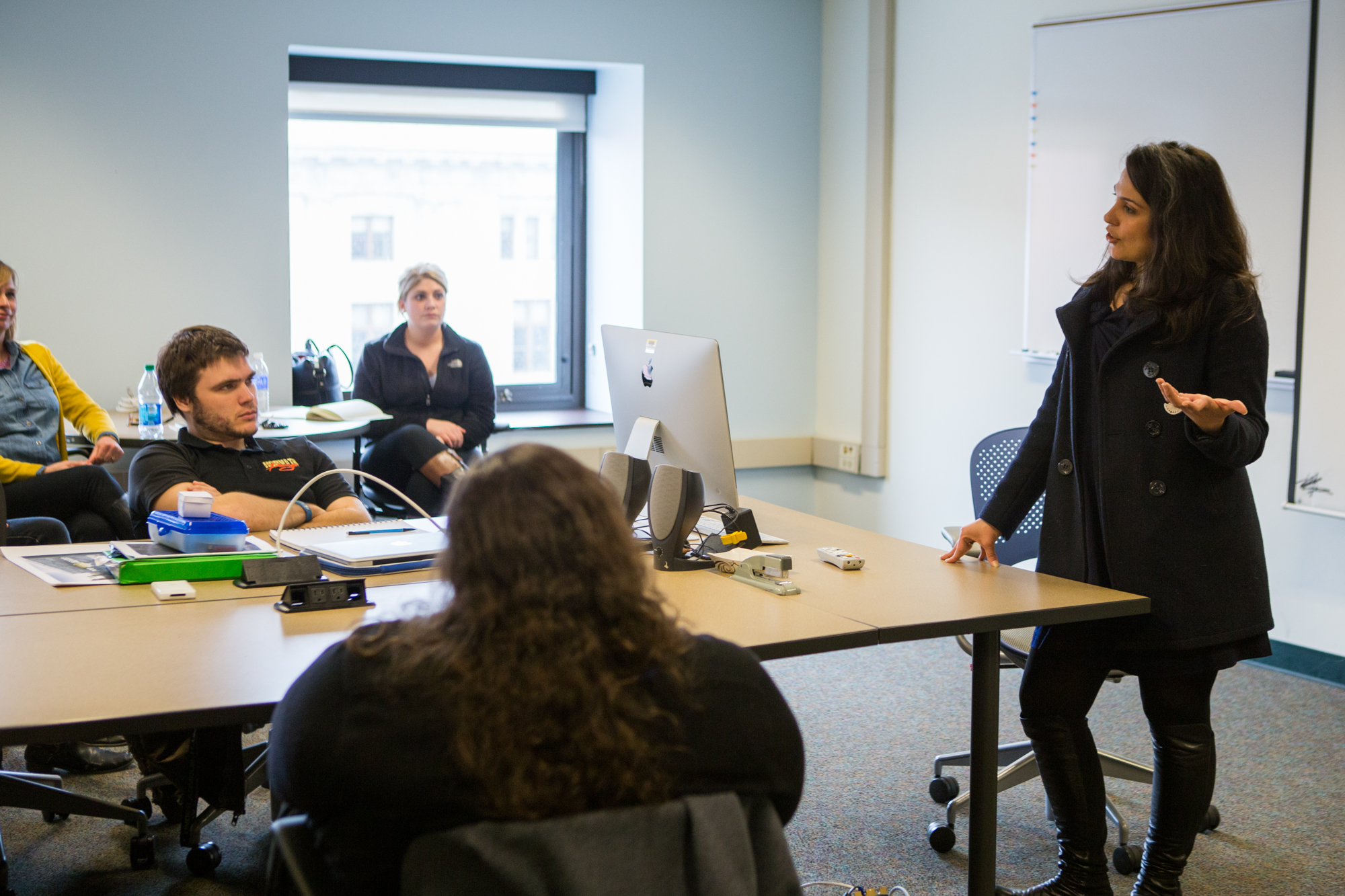 de Almedia interacts with students in the Graphic Design program

Speaking of her own work with WIRED, she said “That’s when I feel it’s a job well done – when the people who created the other half of the content are really happy with my design too.”

Fittingly, Sanders wrapped up Design Week with a talk that focuses on where design has been, where it is, and where it’s headed next. A visionary in pre-design research, she’s introduced many of the tools, techniques and methods being used today to drive and/or inspire design from a human-centered perspective and has practiced co-designing across all the design disciplines. 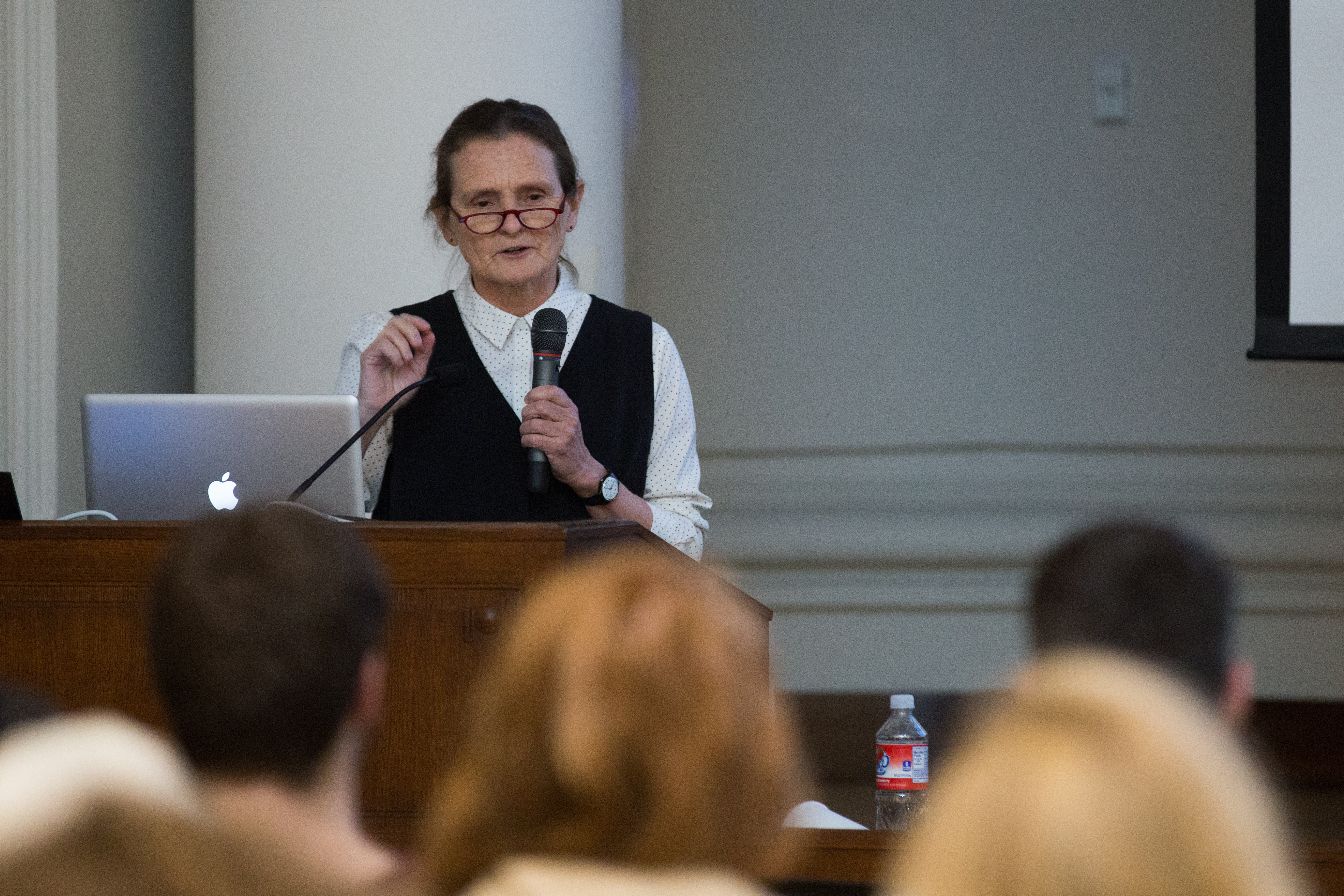 Drawing on her work with MakeTools, a company she founded that explores new spaces in emerging design landscapes, Sanders talked about how design has evolved from being driven by the demands of clients to being driven by designers’ own explorations of how the design process can help meet needs and solve challenges of any scale.

In her talk, Sanders discussed the evolution of design, as well as where designers will be headed in the future

“Now we have interdisciplinary teams working at many different levels of scale, not just products and services, but all the way up to the level of wicked problems,” she said. “Designers and design researchers are being asked to explore what to design, not just how to design it. More and more, we’re being asked to make sense of the future and give shape to it.”

Luckily, KCAD community members didn’t have to go far to interact with the world-class creative talent on display. Viemeister, De Almedia, and Sanders all spoke on campus, while Herr spoke just down the street at the Civic Theatre. KCAD also hosted a Women in Design discussion panel - featuring Mary Brown of Grand Rapids Opportunities for Women (GROW); Kim Dabbs, KCAD alum ('02, Art History) and Executive Director of the West Michigan Center for Arts and Technology (WMCAT); Sarah Molina, another KCAD alum ('03, Interior Design) who works at Progressive AE; Andrea Napierkowski, owner of Curly Host; and Meghan Raven of Stryker Medical - as well as a KCAD Alumi Association-sponsored free Adobe workshop that focused on getting the most out of InDesign. 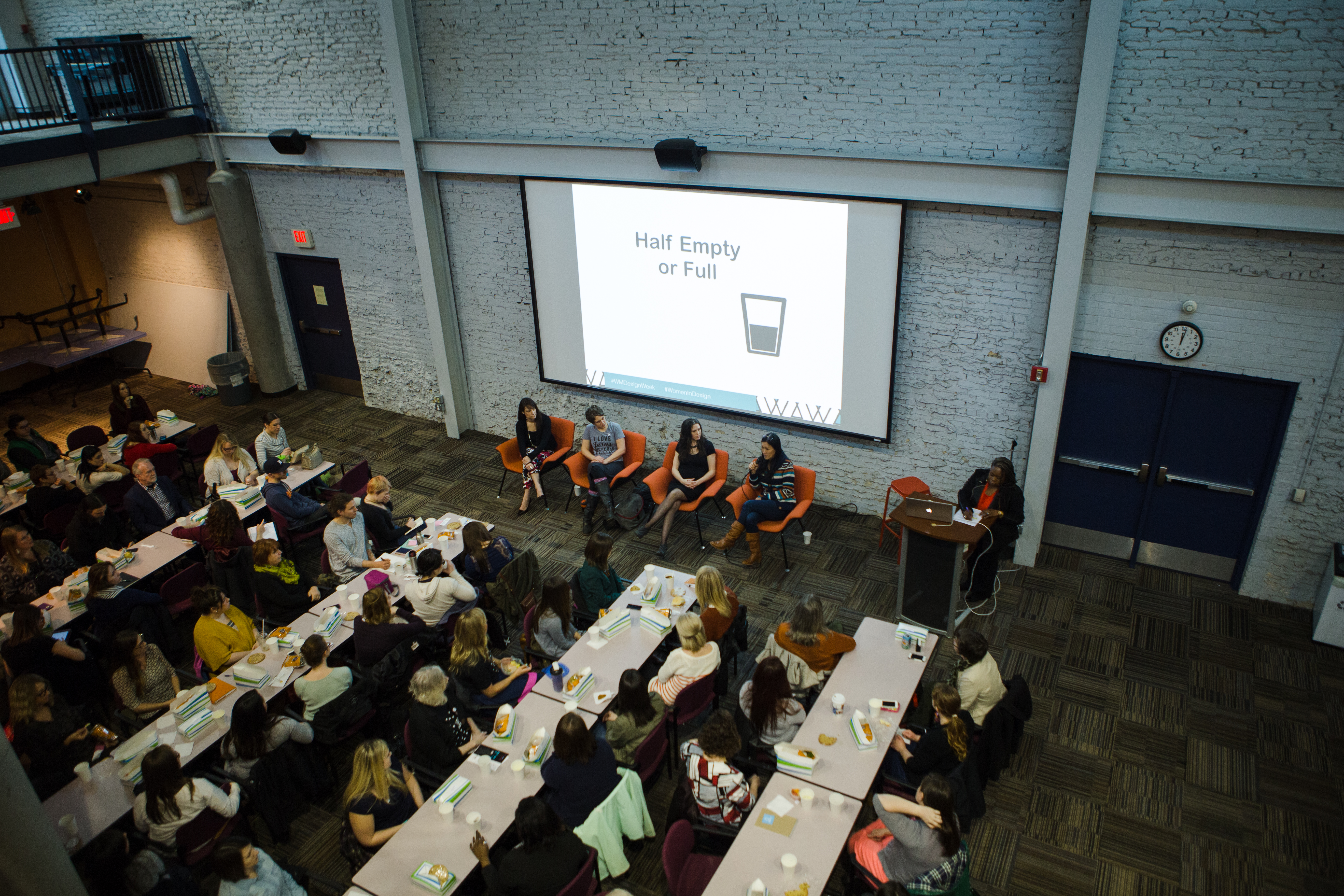 “KCAD wasn’t our only audience, but they’re an incredibly important one, especially our students, because they’re the ones who will help shape the future landscape of design,” said Krayer. “We wanted to introduce them to people who have made careers out of taking an active role in shaping that landscape themselves.”