This article originally appeared in the fall 2018 issue of Portfolio magazine. Read the complete issue.

Renowned furniture designer David Wolcott Kendall transformed industries and impacted the lives of people around the world with his pioneering spirit. For the past 90 years, the college that bears his name has been doing the same by responding to the present while focusing on the future.

Today, KCAD boasts thousands of successful alumni around the globe, a dynamic urban campus, diverse program offerings, and recognition on national and international stages. Through its growth, it’s remained true to the mission Helen M. Kendall set forth in her will in 1928 when she founded the school of art to continue her husband’s legacy of creativity, innovation, and education. A talented watercolor artist in her own right, Mrs. Kendall wanted the school to reflect her husband’s strong belief in the core principles of art and to continue the support and encouragement he gave to aspiring artists during his lifetime.

In her will, she stated, “The object that I wish in founding this school is to train good draftsmen; [therefore,] the life class shall be a prominent feature, drawing from memory shall be encouraged, and branches of study conducive to good knowledge of architecture shall be fostered.”

David Wolcott Kendall first came to Grand Rapids in 1879 and proceeded to shake up the furniture industry at every turn. His chemistry experiments revolutionized the use of finishes to enhance the aesthetic appeal of lessdesirable woods. He imagined an office chair that reclined and revolved, and the future of office furniture was forever transformed. A lifelong learner and teacher, he traveled extensively for inspiration and shared his knowledge wherever he could. U.S. President William McKinley, who had the world’s furniture at his fingertips, gave the designer’s now-iconic take on the Morris Chair a prominent place in the White House. 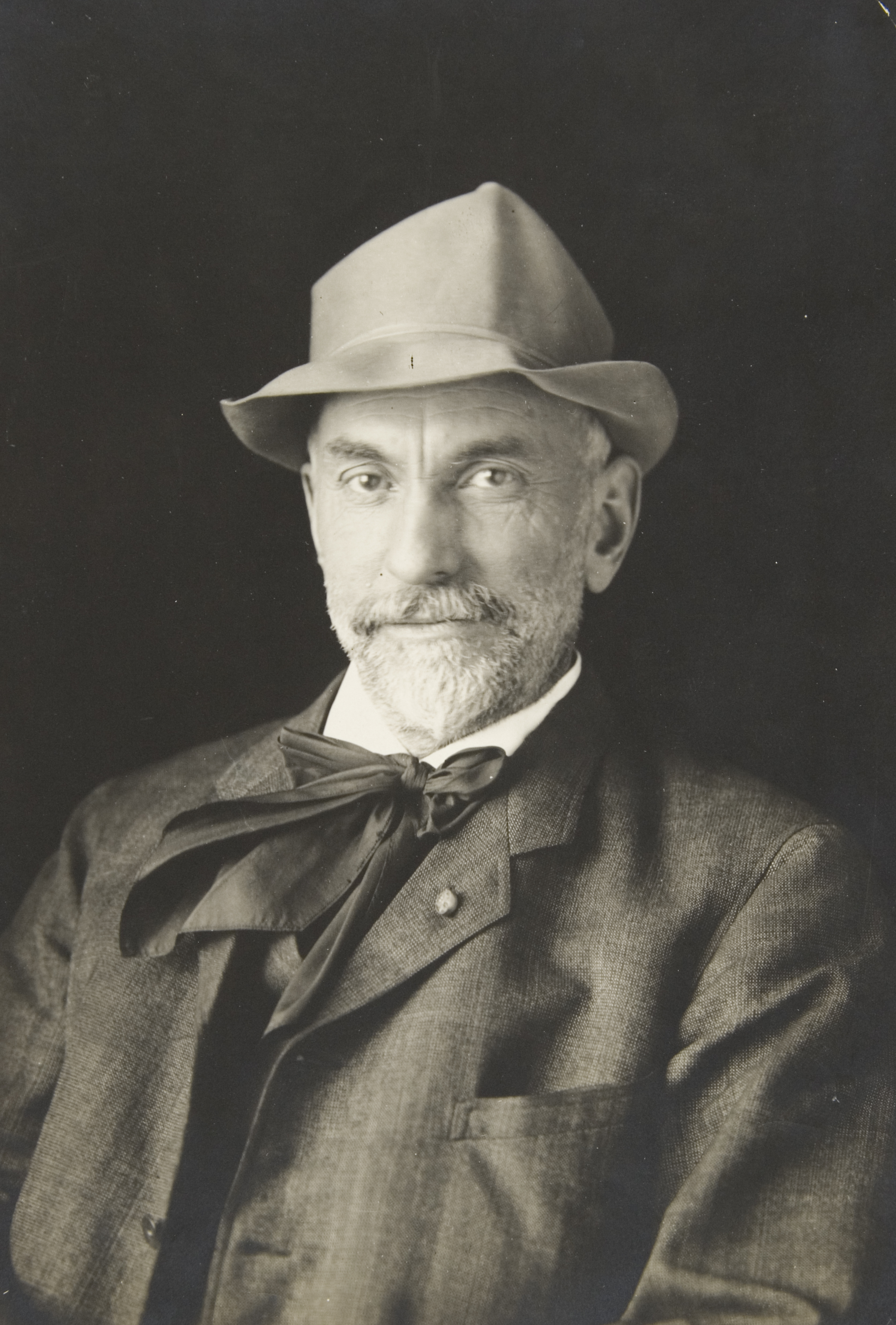 Known as “the Dean of American Furniture Designers,” David Wolcott Kendall was a luminary creative force whose influence on the furniture industry is still being felt today.

Kendall’s influence would live on in ways he’d never imagined. Eighteen years after his death, the David Wolcott Kendall Memorial School opened its doors to a handful of students, and by the 1930s had become a veritable pipeline to creative industries near and far, with many early graduates following in the footsteps of the craftspeople who helped build the Grand Rapids furniture industry. In 1946, the school was renamed the Kendall School of Design, a moniker reflecting its national reputation in furniture design and home merchandising.

Seeking to connect students to a broader range of career opportunities, the school established a foundation program in the 1970s. The move attracted even more students, leading to the school being certified as an accredited, baccalaureate degree-granting institution in 1981.

“The ‘70s brought a massive demand for creative professionals in advertising, interior design, illustration, and photography, and we were in a great position to meet it,” says Graphic Design Professor Ron Riksen, a graduate of KCAD’s Advertising program who joined the faculty in 1971.

Riksen and his fellow faculty did that in large part by dovetailing their own professional experience with their teaching. The influence of their expertise was clear—no sooner had alumni from the era donned their graduation caps than companies such as Hallmark, American Greetings, Disney, and Haworth came calling.

“When industry needs and trends shifted or when the art world underwent changes, we shifted our curricula accordingly and brought active professionals in to teach so that we were always positioning students to be immediate difference-makers,” says Riksen.

By the late ‘80s, the school was drawing students from around the world. It was growing itself too, having taken up residence in the spacious Manufacturers Building in downtown Grand Rapids. In 1987, it took on its current name, Kendall College of Art and Design, reflecting the balance of art and design in its curriculum.

In the mid-1990s, KCAD and Ferris State University began discussing a potential merger, one that would open up a host of new opportunities for students and set the stage for the college’s transition to the 21st century.

“Technology was driving art and design in powerful ways, and we knew our students would need to stay on the cutting edge to stay competitive,” says Dean of Student Success Sandy Britton, who started at KCAD as a financial aid officer in 1985. “The relationship with Ferris State University gave rise to new resources and facilities that took students’ opportunities to a whole new level.”

The completion of the merger in the 2000-2001 academic year spurred an explosion of growth. KCAD purchased the adjacent Interstate Building and connected it to the Manufacturers Building with a striking three-story atrium. The expansion led to new student commons areas and display galleries for student work as well as fully equipped labs for sculpting, printmaking, photography, digital animation, audio recording, video production, and woodworking.

Over the next decade, KCAD acquired and restored the Historic Federal Building in downtown Grand Rapids, creating more room for resources like the Material ConneXion Satellite Library, which features thousands of physical samples of advanced, innovative, and sustainable materials, and The Fed Galleries @ KCAD, a professional-quality exhibition space that enabled the college to not only attract high-caliber artists from around the world but also showcase the powerful work of its students, faculty, and staff while facilitating initiatives that support and expand on curricular learning experiences.

At the graduate level, Master of Fine Arts Drawing, Painting, Photography, and Printmaking; Master of Arts in Design; Master of Arts in Visual and Critical Studies; and Master of Architecture degree programs were added, as well as a Certificate in Design and Innovation Management. From their onset, these programs have fostered a vibrant community of graduate students from around the world who come to KCAD to take their careers to the next level.

Long an epicenter of creative community in West Michigan, UICA continues that work today as an extension of KCAD with initiatives like ArtWorks, an innovative youth program blending mentorship and on-site creative job training, and the Exit Space Project, which has raised over $80,000 to date to support public art in Grand Rapids and has given local artists and communities a powerful platform to connect.

UICA is an equally vital resource for KCAD students, who, like the community at large, continue to benefit from programming, exhibitions of world-class contemporary art, and a state-of-the-art theater showcasing the best in independent, international, and documentary cinema.

(above): The entire student body of the David Wolcott Kendall Memorial School—circa 1930s—in front of the school’s original location in the Kendall homestead at 145 Fountain Street; (below): Newly accepted students from the class of 2018 in front of the Woodbridge N. Ferris building during a new-student orientation event.

“KCAD has always been integrated into its surrounding community, and that’s a big part of what makes the education we offer so unique,” says Associate Professor and Interior Design Program Chair Lee Davis. “We’re not just nurturing students’ creativity; we’re also helping them understand their place in the world as artists and designers and the impact they can have.”

As the pace and complexity of modern life increase, so does the value artists and designers bring as communicators, problem-solvers, and change agents. Understanding that value and translating it into education, says KCAD President Leslie Bellavance, is more than a strategy for the future; it’s a responsibility.

“KCAD’s greatest strength today mirrors a truth our founder and our namesake understood implicitly: that artists and designers should not just make things for their own sake; they should make things that change our world for the better. Everything we do as an institution is shaped by this understanding, by this desire to see our graduates become leaders.”