A Place to Heal: KCAD Interior Design Team Collaborates on a Home for Detroit Veterans

Late last year, interior designers across the state of Michigan were invited to take part in a life-changing project. Over the next six months, they would work together to finish 14 apartments designated for veterans who had experienced homelessness in the Sugar Hill Arts District of Midtown Detroit.

KCAD Interior Design Program Chair Mary Ellen Fritz jumped at the opportunity to apply. “Opportunities like this don’t come up very often,” she said, “We knew it would be compelling to work on a project centered around veterans. We also knew it would be challenging because it’s on the east side of the state, but having a project of this scale that somebody else has organized only happens every 10 to 15 years. We really wanted to do it!”

The KCAD team applied and was selected, becoming the only team from the west side of the state to participate. Along with Fritz and KCAD Interior Design Professor Lee Davis, the team included alumni Monica Mathie, Sara Petoskey, and Leanne Westrate, along with one current student, Ashley Grotenhuis. Fritz says, “As the two professors, Lee and I wanted to give the design lead to this group of current students and grads. We planned to provide support and take an organizational role, but we wanted it to be their project.” 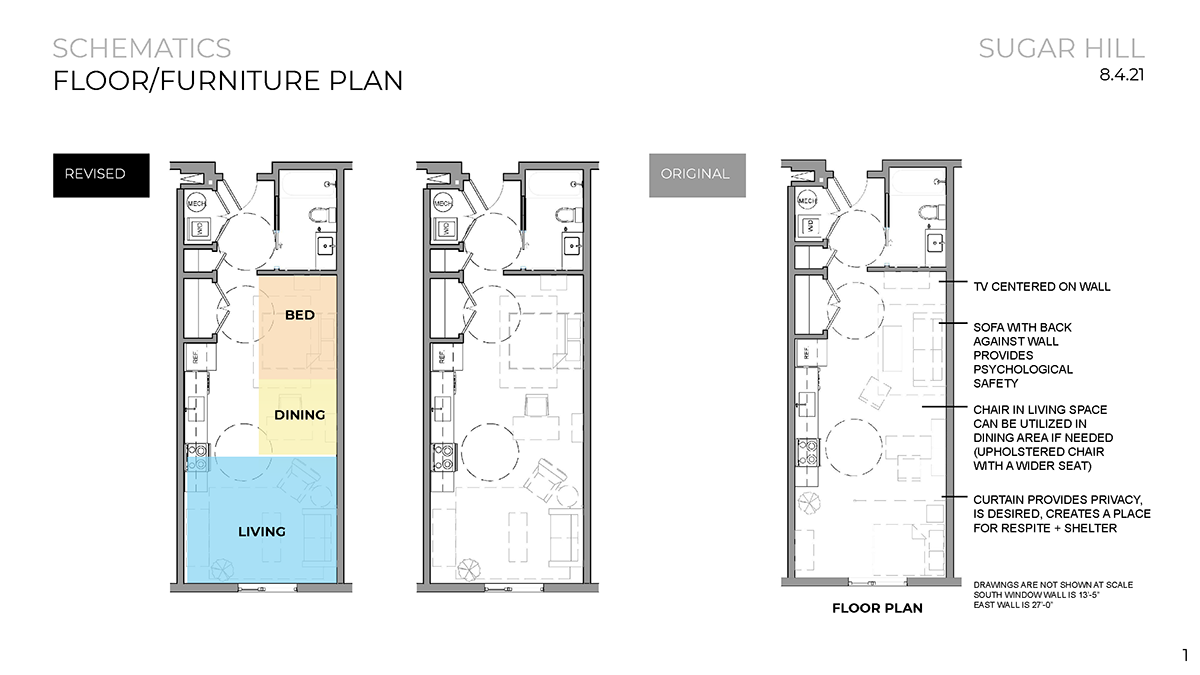 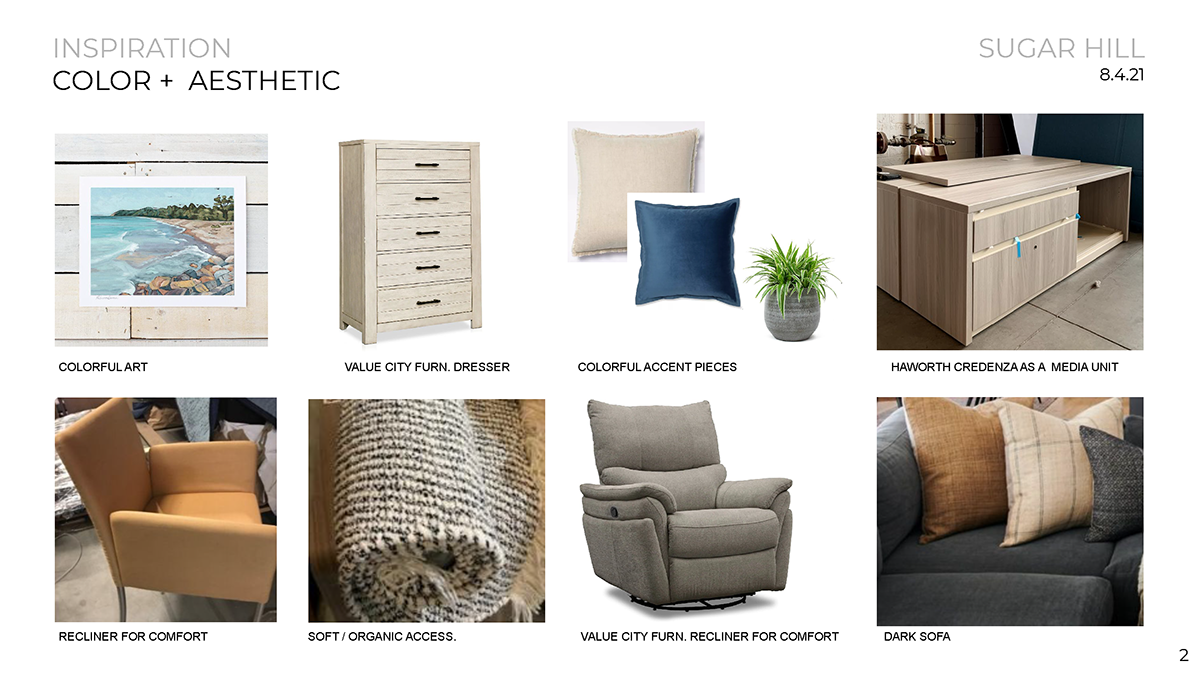 Each of the 14 project teams chosen received a budget of $3,200 to furnish and install one studio apartment using trauma-informed design concepts. Fritz explains, “This is an up-and-coming area under the umbrella of human-centered design solutions.”

Monica Mathie, a 2018 graduate of KCAD and now an interior designer at Lott3Metz Architecture, says she was drawn to the project to learn more about trauma informed design as it relates to veterans. “I have many veterans in my family, and understanding how their surroundings can cause a flare up in their PTSD became captivating to me as a designer and family member,” she explains. “Not to mention, just being able to create a home for someone who has not had that life in a long time felt important.”

This aspect of the project also intrigued Grotenhuis, who was eager to give back to vets and to learn about trauma-informed design. To kick off the project, all teams attended a Zoom workshop on the subject, learning how to apply psychology, neuroscience, physiology, and cultural factors to every decision to enhance people’s real and perceived safety, respect, connection and community, control, dignity, and joy. 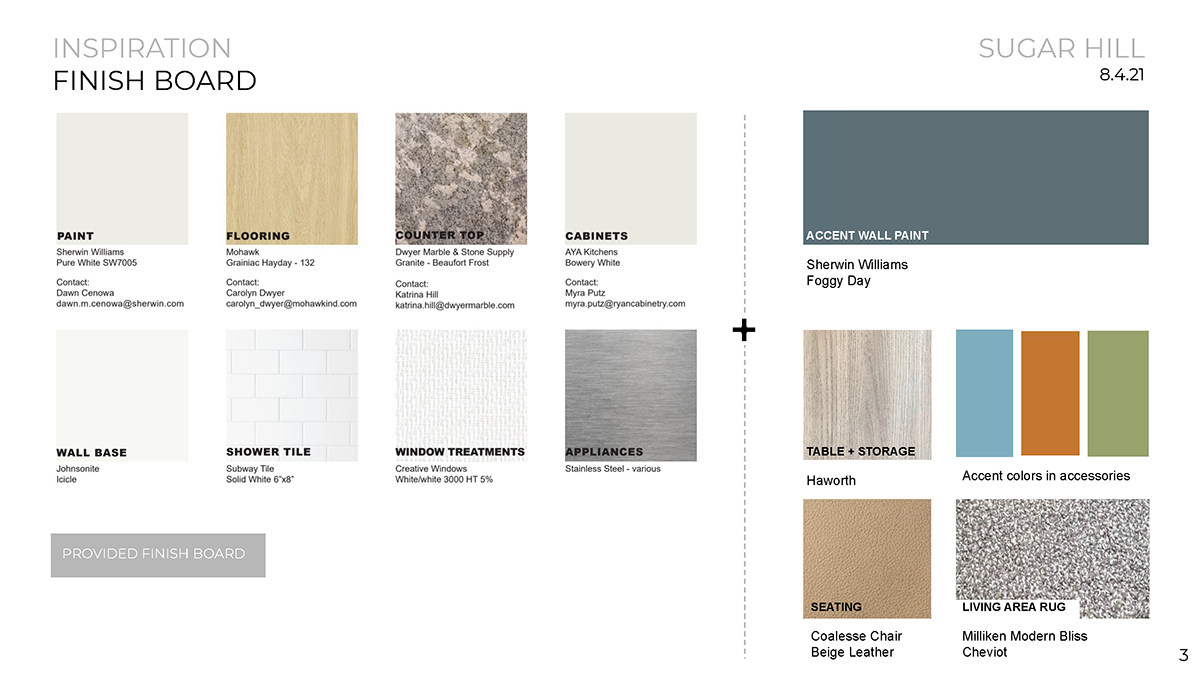 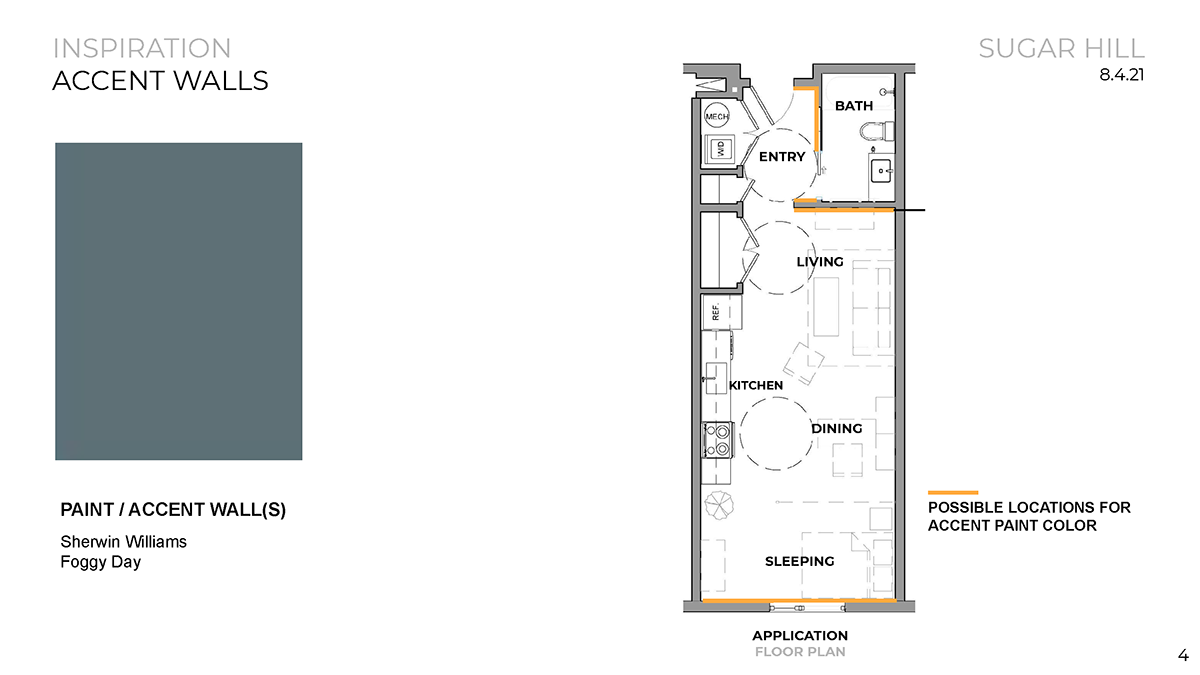 To create that kind of environment on a shoestring budget, KCAD’s team members had to tap into their professional network. Davis explains, “With our connections to professionals and the industry, Mary Ellen and I both reached out to people we knew. We also went to the Haworth store and talked with reps for carpet and for furniture to see if they wanted to participate. Everybody was very willing to donate a little bit here, a little bit there. It was such a good thing to do that people wanted to be involved, so it was a very easy ask.”

When it came to selecting specific products for their apartment, the graduates and students collaborated, scheduling an initial brainstorming session, then working independently and posting their ideas in a shared document. “They set the budget, worked together as a team, and decided on the palette of blues, greens, and beach tones for a soothing, restorative palette. We nodded and said, great idea, we totally support where you’re going,” explains Fritz. 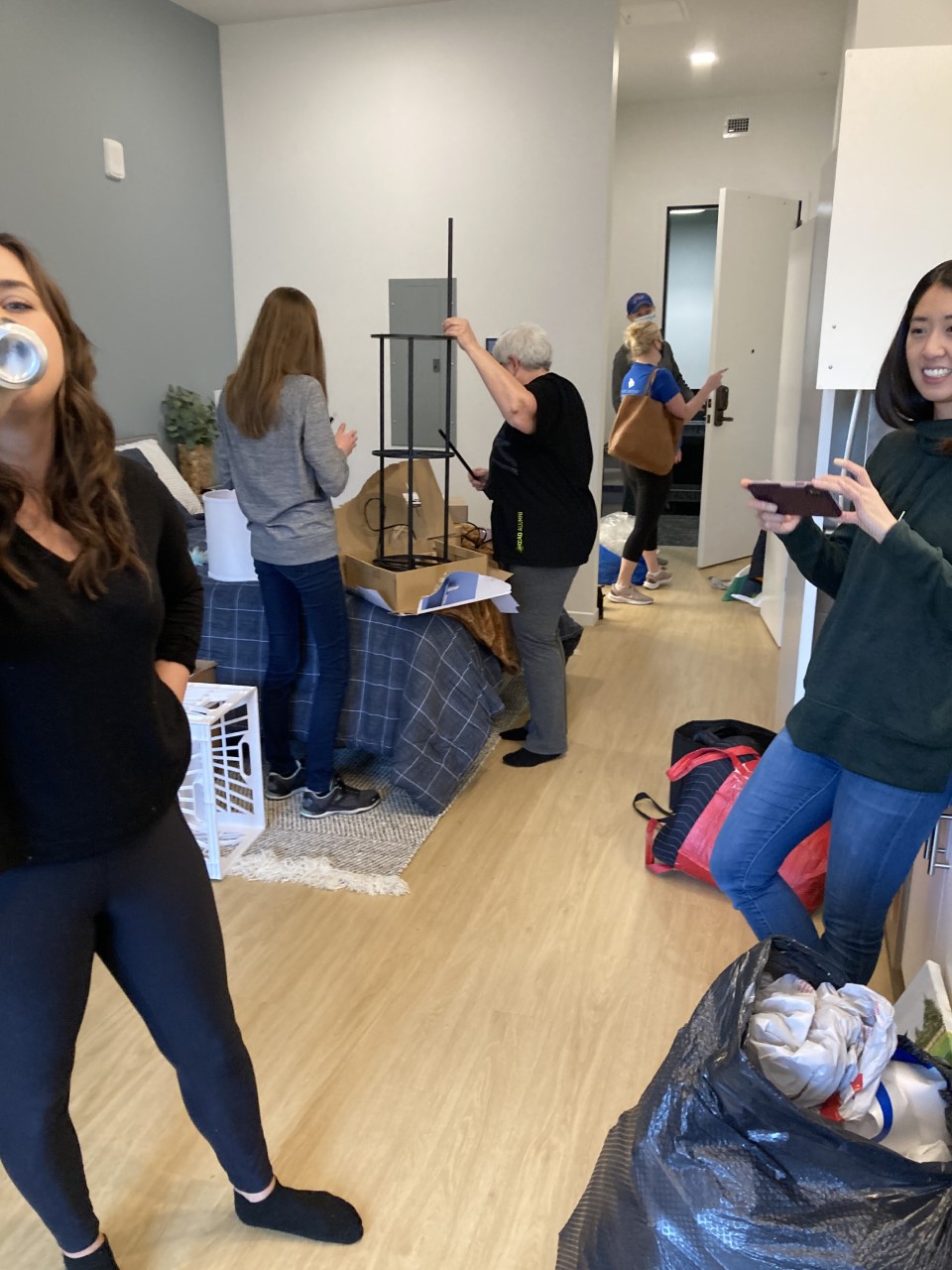 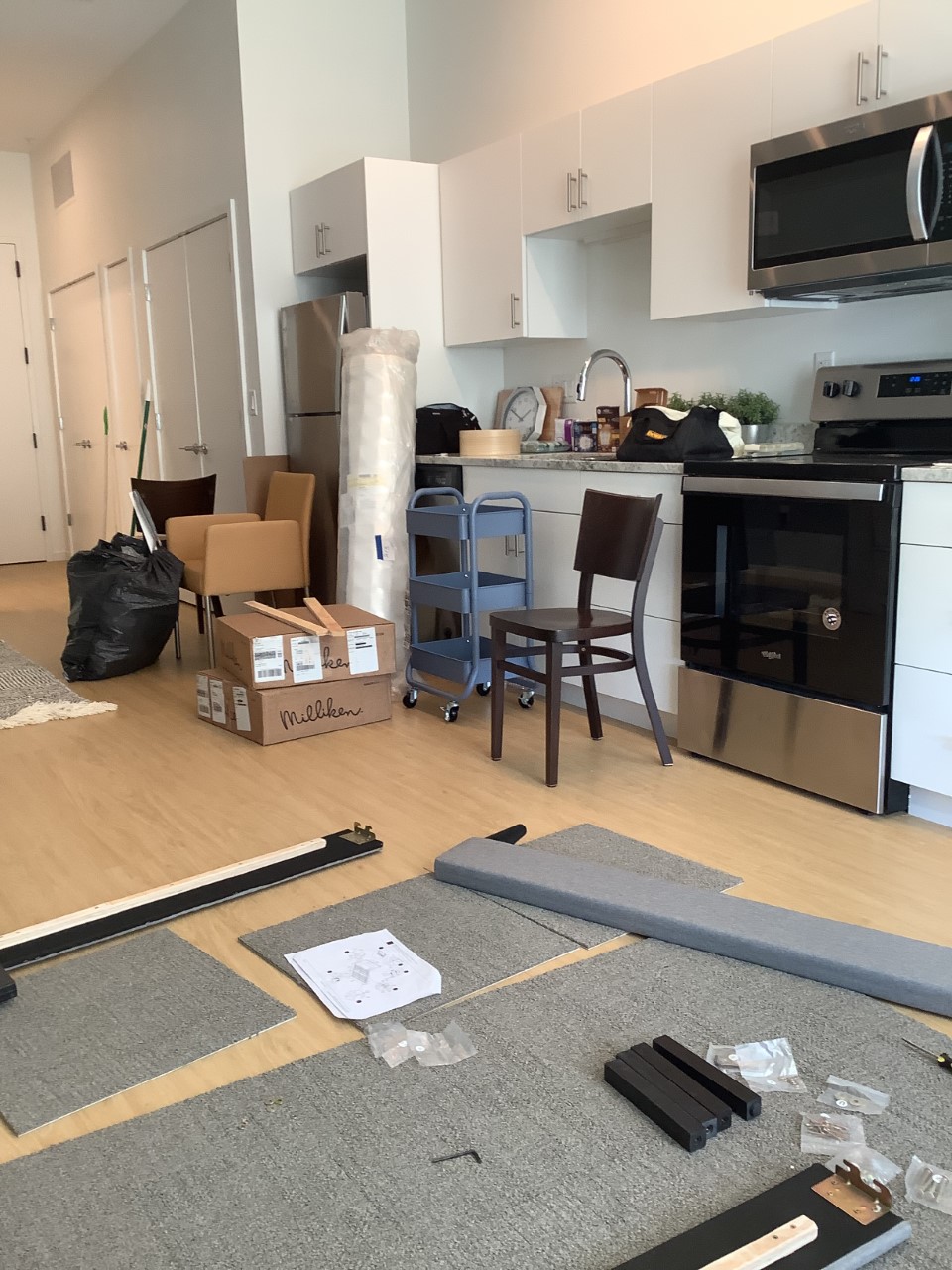 Because the project took place mid-pandemic, supply chain issues created some extra challenges. Fritz says, “We did some shopping at IKEA and found the shelves empty, so without the donations, I don’t think we would have had a completed unit. Our donations from Haworth, the Steelcase dealership on the east side of the state, and Milliken carpet also meant we had higher quality products than if we had only been able to shop at a big box retailer, especially at the price point we could afford.”

Selecting the right art for the apartment presented another challenge in terms of trauma-influenced design. Mathie says, “Artwork was probably one we struggled with the most because we didn't want it to cause a flashback of any kind. We wanted it to feel warm and serene without being too abstract in ways that allows the mind to create shapes and color into a bad memory.”

Due to the pandemic, none of these design discussions could be held in person, but communication was never an issue. “Oh baby, we Zoomed,” explains Fritz. “We had gotten good at that from having a year of remote and hybrid learning at KCAD.”

Mathie adds, “Leanne, Ashley, and I met on our own time to discuss ways we could delegate the sourcing load and found ways to keep track of what we liked and where our budget was. I think that was probably the best way we learned from each other; finding ways to collaborate from a distance and finding ways to keep in contact without Zoom calling every day.” 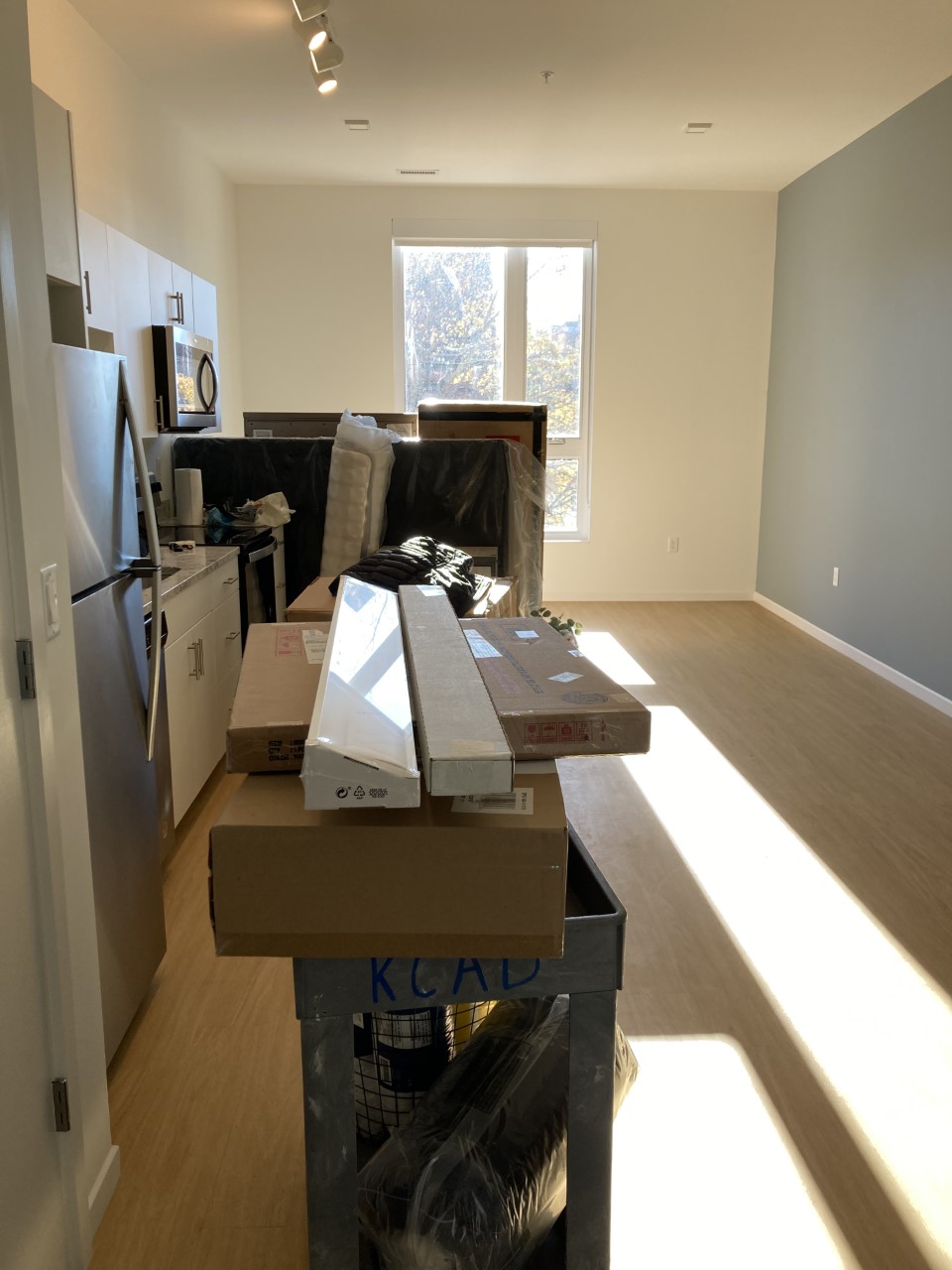 All these regular check-ins gave Grotenhuis another opportunity to learn about professional teamwork before leaving college. “I’m a very organized person,” she says, “so I learned to manage my schedule by blocking out time to work on it.”

Working online may have been efficient for those involved, but working far away from the project site did prove challenging for the KCAD team. “All the design teams from the east side of the state had a couple of opportunities to see the building in progress,” says Fritz, “but we couldn’t get there to do any of that.”

In fact, the team didn’t visit the site at all until installation day, when the entire team descended on the site, carrying products in their minivans and bringing spouses to help with the move. “It was everybody pitching in up to their elbows to assemble furniture and do the whole install, which was not the part of the design process we’re usually involved in,” says Fritz. 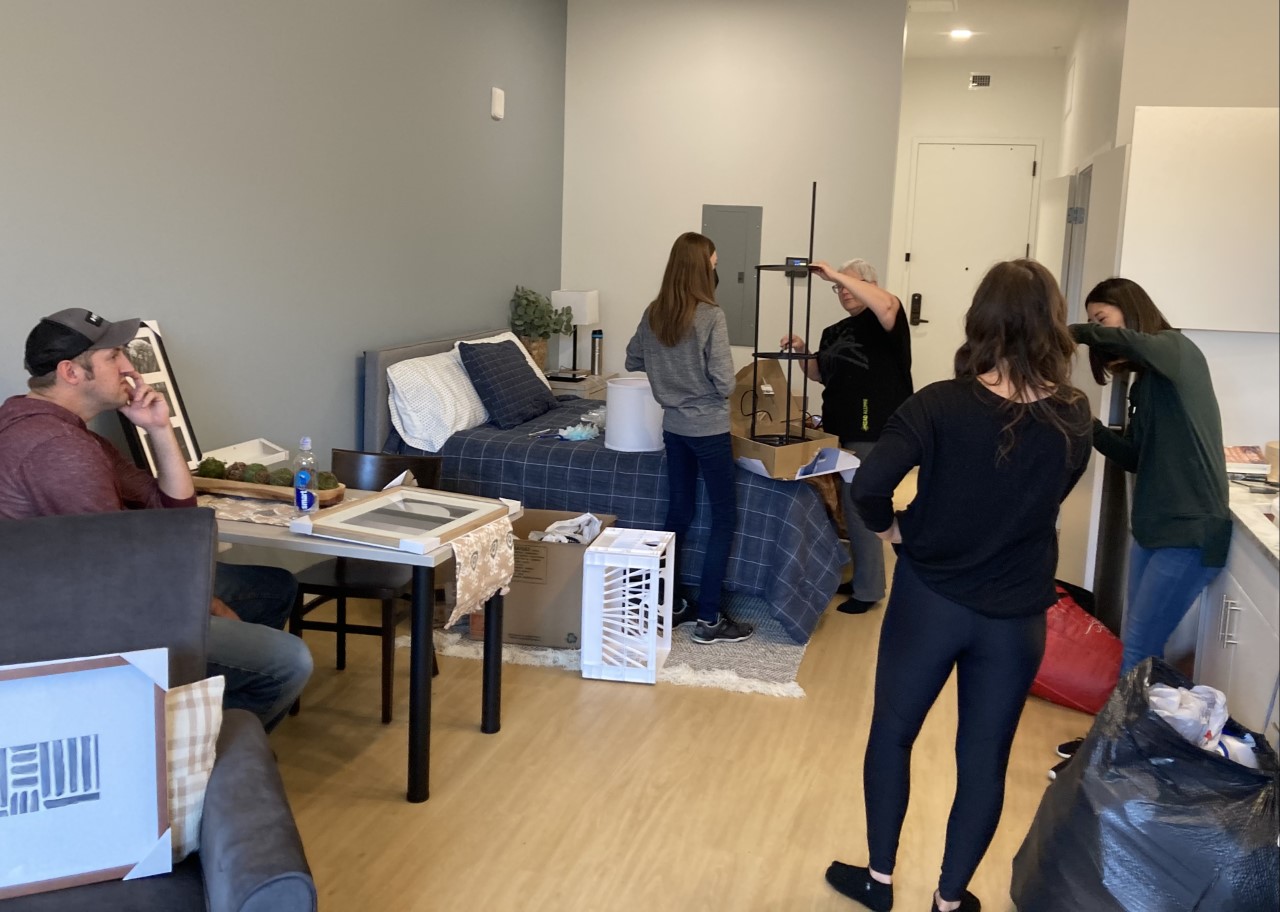 During installation, they discovered that the window treatments they’d chosen weren’t big enough. “Fortunately, they had installed blinds so it looked beautiful without our draperies, but it was something you couldn’t foresee because you couldn’t get into the space,” says Davis.

This portion of the project was also eye-opening for Grotenhuis, who explains, “In school, we only get through design development and construction documents, so getting to see and work on the parts of the project that go beyond that was interesting. I’m really proud of the way the apartment turned out and being able to give back to the veterans by using trauma-informed design to help them heal.”

At the end of the day, many of those who worked on the project were brought to tears by the results. “It may have been on a shoestring budget and kind of scrappy, but the end product turned out to be such a healing, comforting, well thought-through space, and you can picture somebody living there,” says Fritz. 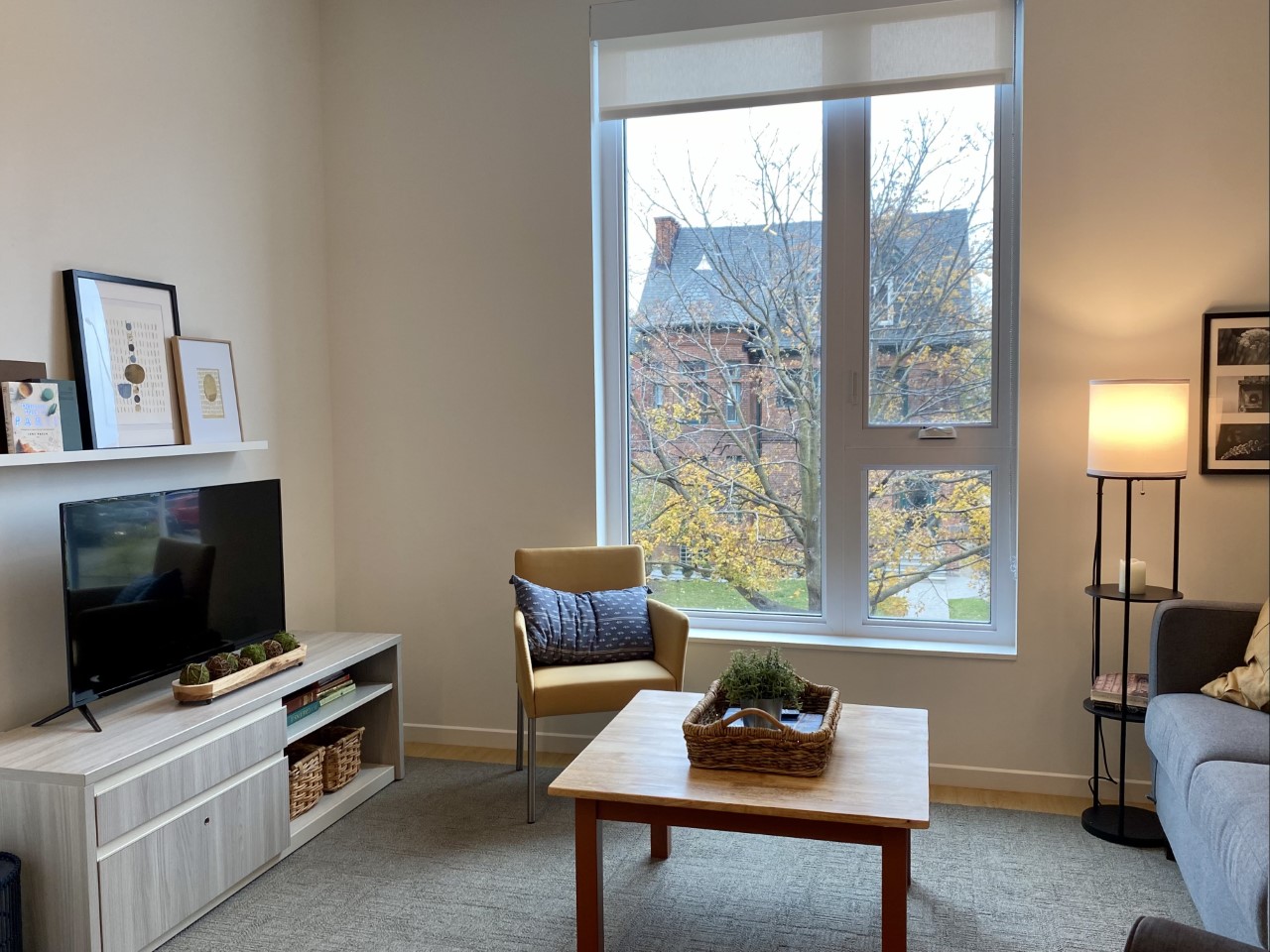 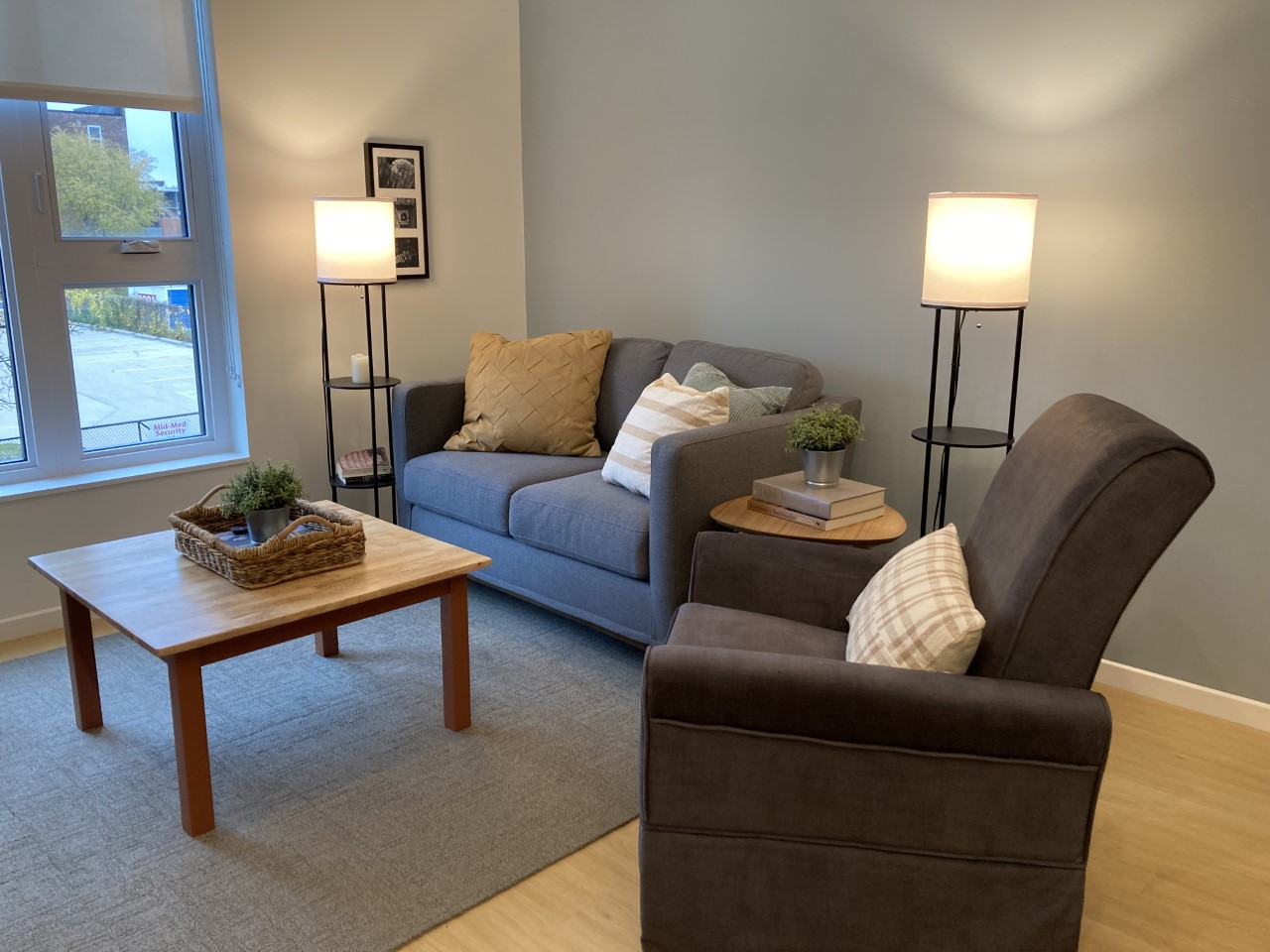 Fritz and Davis believe the real-world experience was invaluable. “We all have these great ideas in our head, but it doesn’t mean nearly as much as seeing it and saying, ‘I had a hand in this,’” says Davis. “There’s nothing more fulfilling than actually seeing your designs brought to life, so I’m really glad Ashley was able to do that.” 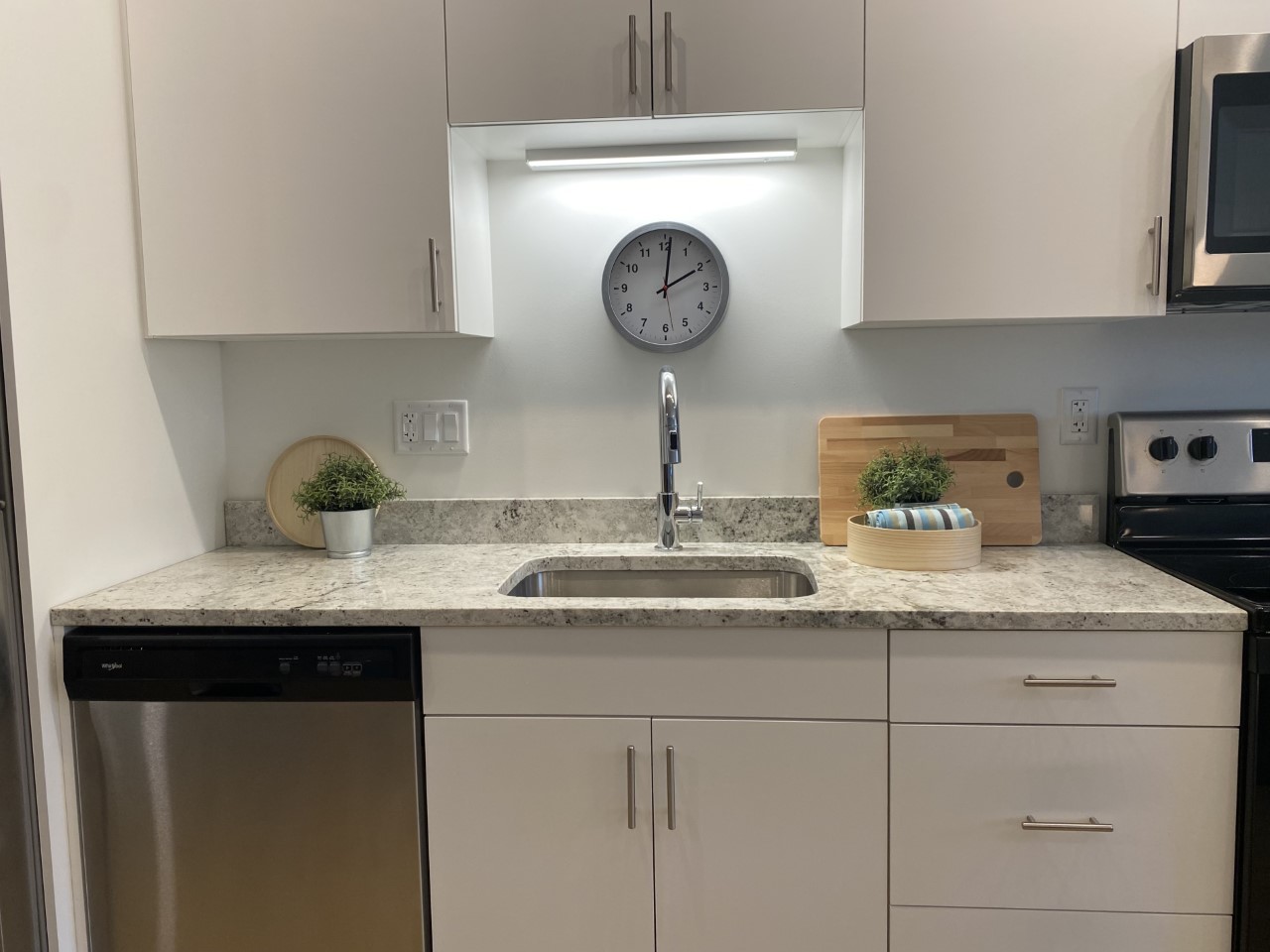 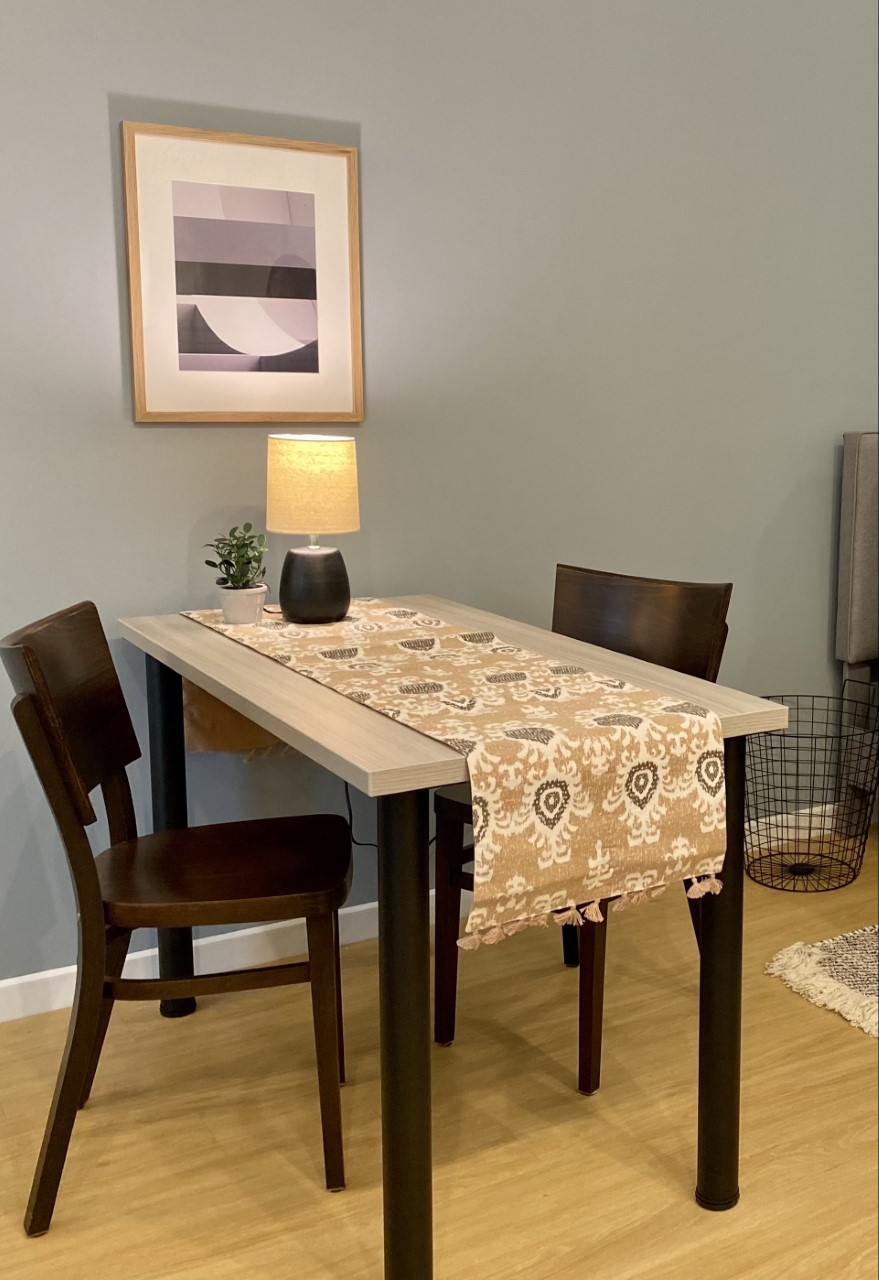 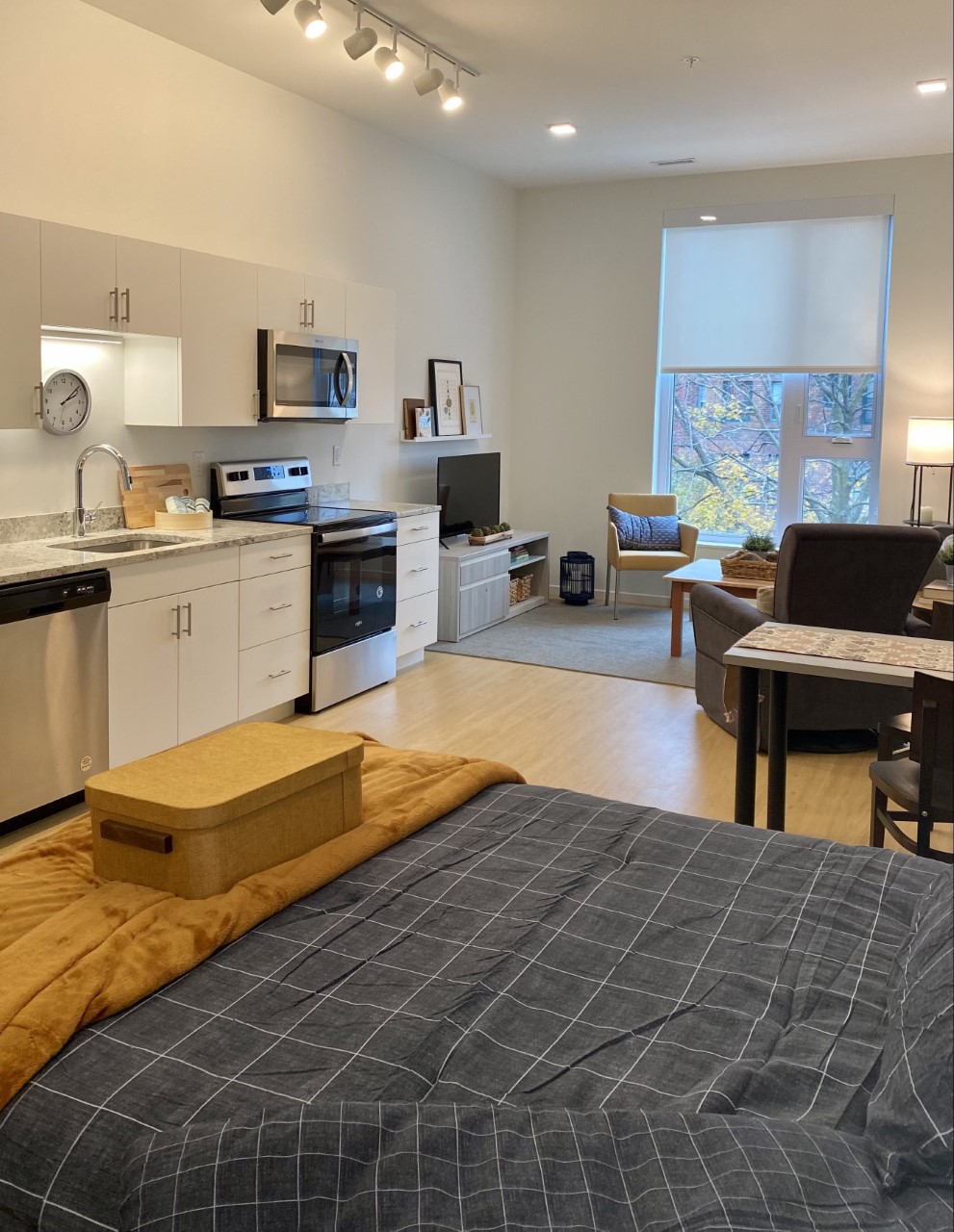 During the project, the professors also found opportunities to bring the experience into their classroom. “It was nice to be able to use some examples to show our classes that this is how change happens,” says Fritz. “For example, this is not unusual that we had to reselect a paint color at the last minute. It was a nice reinforcement of real life.”

Looking back on the experience, Davis considers it well worthwhile for everyone involved. “This ended up being holistic and complete, and an absolutely wonderful opportunity for us to bring to KCAD.” Adds Fritz, “we would do it again in a heartbeat.”