Through her major in Art History, junior Courtney Jackson constantly explores the connection between humanity and art. Struck by art’s varying levels of accessibility over the centuries, she became interested in the idea of disconnect between art and the people it tries to reach.

“I think that bringing someone a fully accessible experience is important in anything you're doing,” Jackson says. “My thing happens to be art. I want people to be able to fully experience and understand it.”

So when Jackson, who also moonlights as a work study at the UICA, was tasked by Executive Director Miranda Krajniak to make the UICA’s gallery space more accessible in the spirit of the inaugural DisArt Festival, she embraced the challenge.

“I started with the idea of bringing the content of art to the public,” Jackson says. “It’s a way to help people understand what they're looking at. Sometimes there's this barrier that makes people say, ‘what am I looking at? Is this actually art?’ I wanted to make that context more accessible.”

Down the street from UICA, local user experience (UX) design agency Universal Mind was also looking to get involved with DisArt. “We came to UICA and said, ‘hey, we’d love to be a part of it in any way we could,’” said Christian Saylor, a KCAD alum (’97, Graphic Design) and creative director at Universal Mind. “Then we started concepting some ideas about using sensors as a way to enhance the experience of the Art of the Lived Experiment exhibition.” 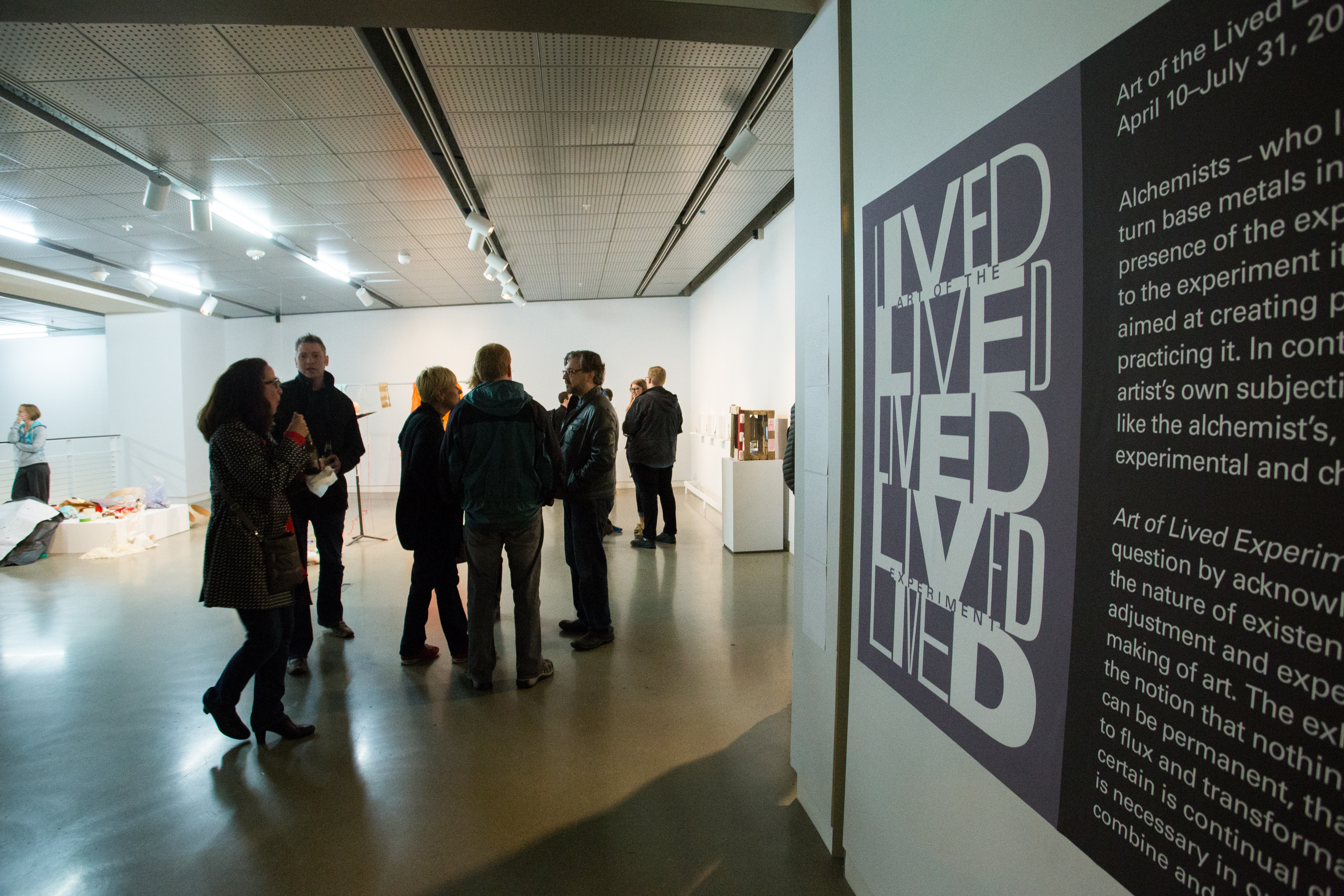 The Art of the Lived Experiment exhibition inside UICA

Jackson and Universal Mind set out to marry UX technology with DisArt’s assertion that art is for everyone, regardless of physical limitations, familiarity with art, or socio-economic background. The result of their collaboration is Access UICA – a new mobile app that harnesses valuable contextual information about different artists and artworks and presents it in a captivating and straightforward manner. The app doesn’t cater to those with disabilities, but rather is designed with a universal audience in mind. 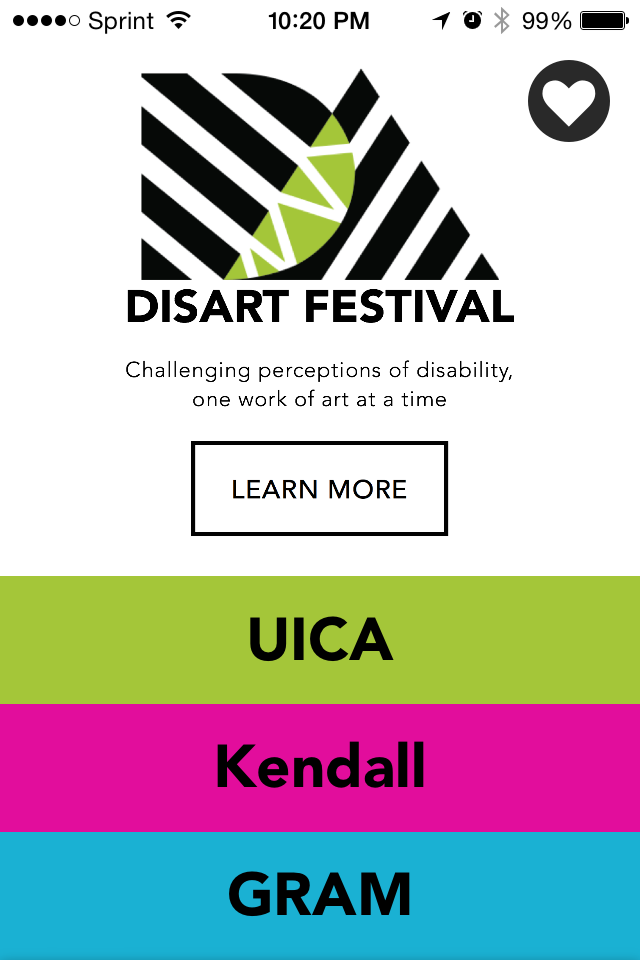 As a person walks through the exhibition, the app uses Near Field Communication (NFC) technology to communicate with iBeacons installed near the artworks, notifying the user when they have approached a specific piece. The app then reveals a trove of information to the user, including biographical information on the artist and details on the specific piece, and it also attempts to show the user, in a manner that’s accessible without being watered-down, what the artist is trying to communicate through their work.

The app’s true inclusivity, however, comes from its ability to intuit how to best communicate with the user based on the individual’s specific accessibility settings. If a patron is visually impaired, for example, the app will automatically queue an audio recording of the supplied information.

As users approach a piece of artwork, the Acces UICA app autmotically pulls up additional information about the artwork and the artist

UICA now lends iPads equipped with Access UICA to patrons free of charge. But the app’s impact isn’t limited to the four walls of the UICA, or to any other venue for that matter. Access UICAcan be downloaded from the app store onto any IOS device, its catalog of information can be access from anywhere.

However, Saylor says the intent of the app is not to replace the gallery experience. “It was tough deciding how much of the information we wanted to give to people in an offline mode, because places like UICA want people to experience the art in person. We wanted this app to enhance visitors’ experiences.”

While Universal Mind handled the app’s technical and UX design, Jackson put her research skills to use, compiling an astonishing amount of supplemental content in a very short amount of time. She also helped secure funding for the project, and worked closely with the local disability community and disability advocates to determine how to best integrate features such as scrolling and swiping into the app, all of this while managing a full-time class schedule at KCAD and working other jobs. 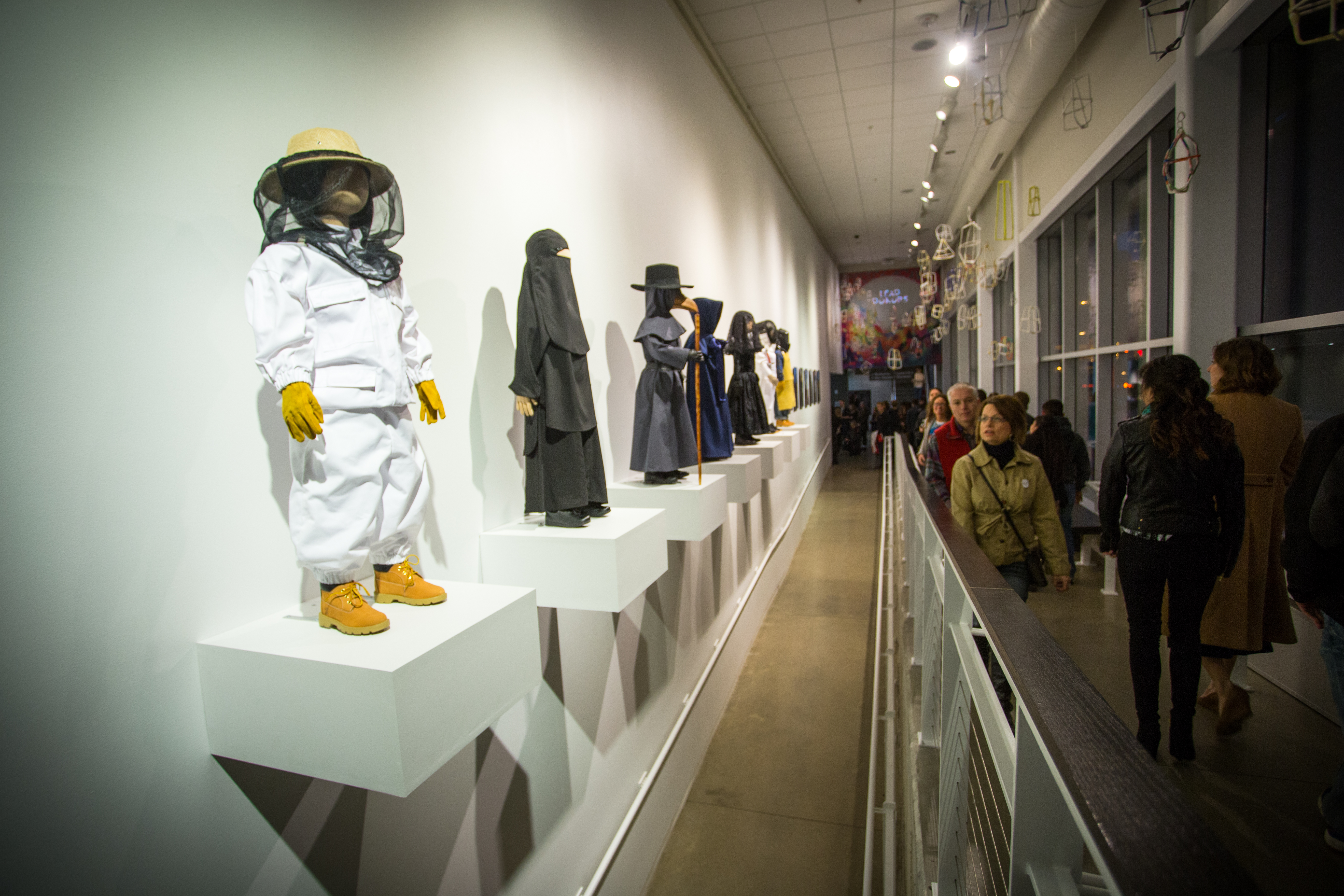 Audiences explore the Art of the Lived Experiment exhibition at UICA

Having never worked in a project management role before, she had to quickly learn how to oversee and effectively communicate among all the parties involved to perfect the functionality and content of the app.

“We were really under the gun needing to make everything functional, and Courtney became the go-to person for us, not only gathering the information but also helping us to understand who the artists were and the different perspectives they were coming from,” said Saylor.

Despite its connection to DisArt, Jackson emphasizes that the app isn’t intended to silo disabled individuals into specialized experiences with art; it’s about celebrating our individual differences while leading everyone to a deeper engagement with art through an integrated experience.

“If people open the app they don't know that it's an accessibility app. They just think it’s just a really sleek app,” Jackson said. “There shouldn’t be a special take on the app for disabled people. It’s for everyone and that's how a lot of things should be.”