It’s one thing to encourage kids to follow their dreams; helping them get there is another matter entirely. That’s why the Grand Rapids Community Foundation (GRCF) is always searching for new ways to inspire students in its Challenge Scholars program to make their big dreams a reality.

This spring, Kendall College of Art and Design of Ferris State University (KCAD) alum Salvador Jimenez (’14, MFA Drawing) and Illustration student Sonia Griffin collaborated with the GRCF to explore the idea of using creativity and the arts as a way to plant the seeds of possibility in the students’ minds from the moment they take the pledge to join the Challenge Scholars program. 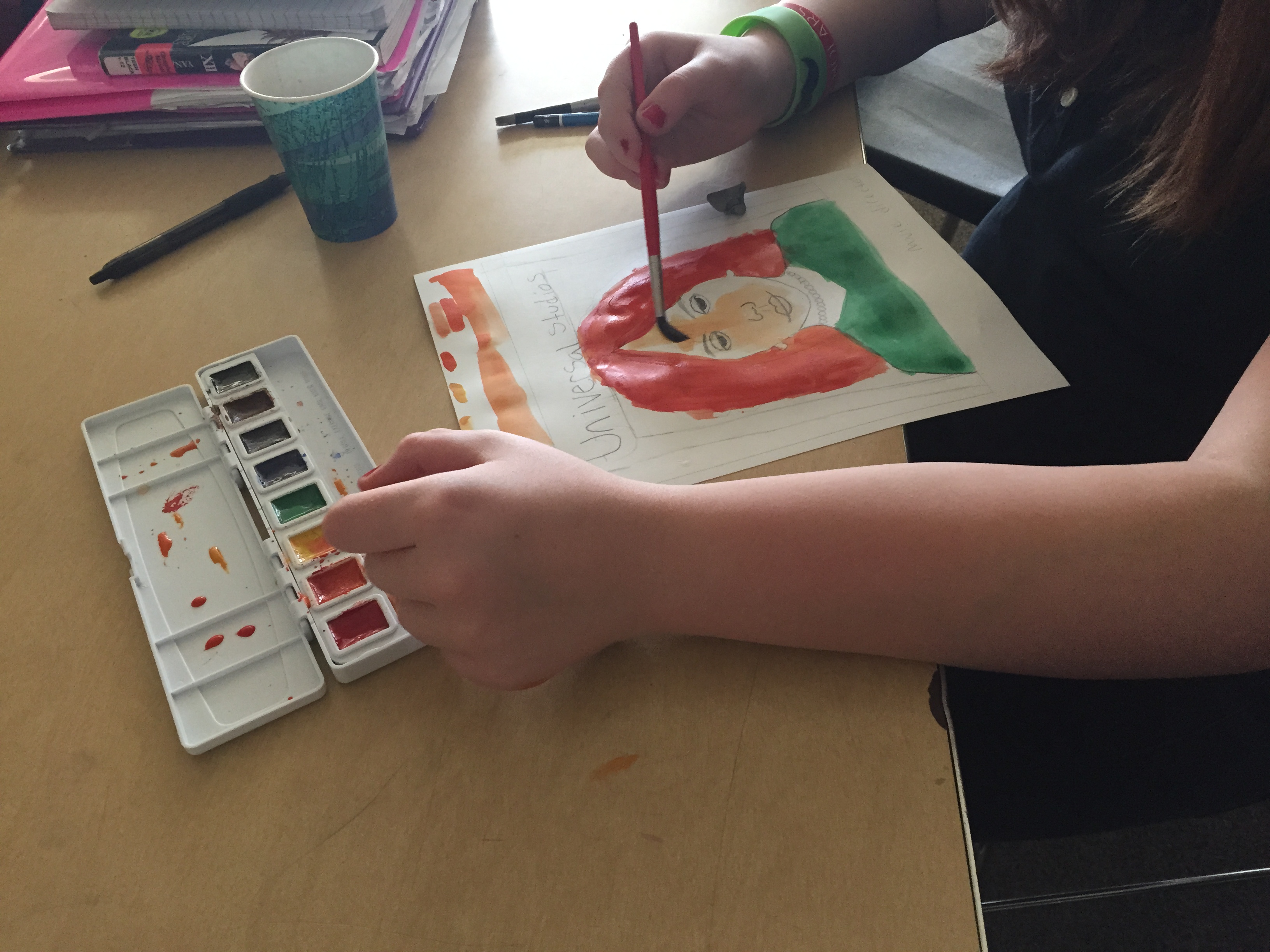 Since the program’s inception 2014, 92% of Challenge Scholars have come from economically disadvantaged families, and while 100% of the students who successfully complete the program will receive a full-ride scholarship to a public Michigan college or university, funding is only a part of the support structure the GRCF aims to provide. The organization’s goal is to ensure Challenge Scholars’ success from the 6th grade onward by coaching students academically, helping solve problems like food insecurity and untreated health issues that can lead to irregular attendance, fostering a culture of parent engagement, and providing year-round enrichment activities.

The collaboration with KCAD has helped the GRCF to see activating the students’ creativity as a key component of that support system. During recent visits to Westwood Middle School and Harrison Park Middle School, Jimenez and Griffin helped 6th graders who are just entering Challenge Scholars program to create self-portraits that reflected their dreams for the future. The portraits were then displayed at the program’s induction ceremony at Union High School. 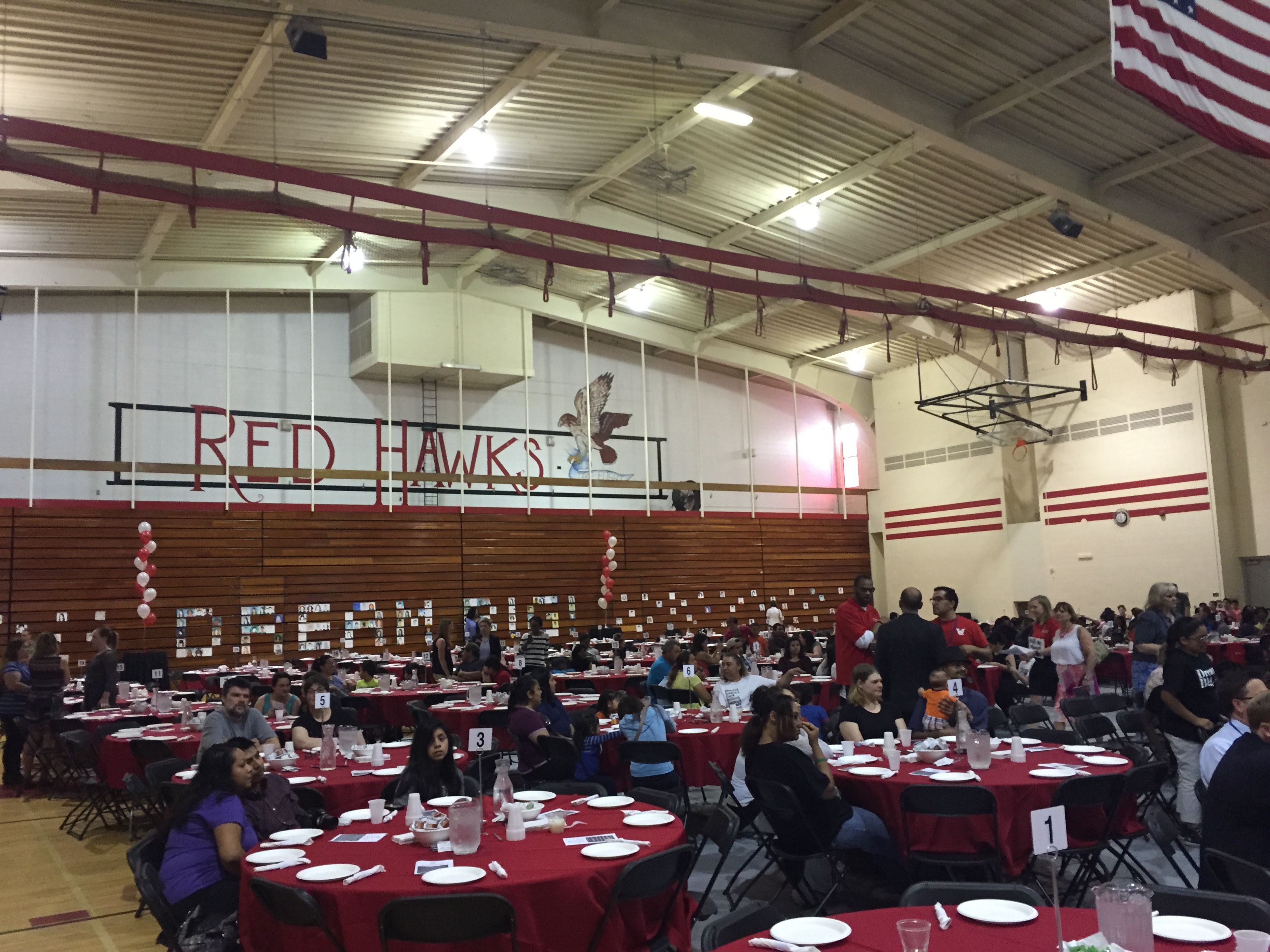 “We thought it would be great to give the kids a chance to really start visualizing their dreams, because that’s one of the first steps toward making them real,” said Jimenez. “It’s critical that all children be exposed to possibility at an early age, because if they’re told over and over again that their options are limited, they’ll start to internalize that as an inescapable truth.”

After showing the students some basic artistic techniques, Jimenez and Griffin turned them loose with watercolors, colored pencils, and collage materials to create their self-portraits. The students were not told to follow any specific instructions or requirements, but rather were free to express themselves however they wished. 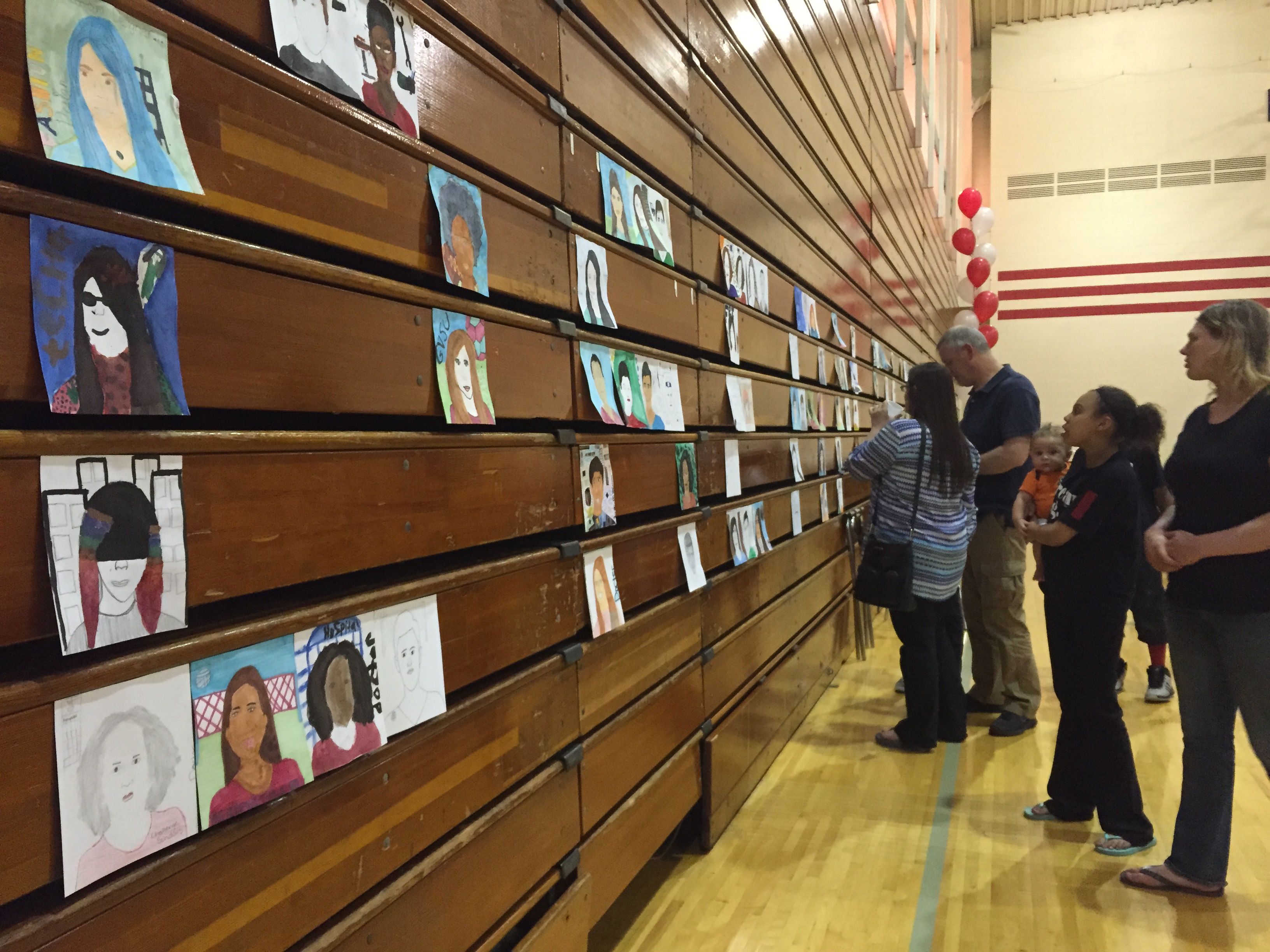 The Challenge Scholars, their families, and their teachers check out the self-portraits

“Some of the students were interested in art and some others weren’t, but once they figured out that their portraits didn’t have to be any certain way, you really saw them get excited about what they were doing,” said Griffin.

According to Challenge Scholars Advisor Ben Oliver, that sense of creative freedom was the most important aspect of the exercise.

“For many of the students, this was there first time ever doing anything like this, and the lack of guidelines really threw some of them for a loop, but what I love about this project is that it’s a starting point for some of them to discover their inner voice, to see themselves as individuals at this formative stage in their lives,” he said. “A lot of the time, students are maybe taught in a way that assumes they don’t know anything, so anytime they have an opportunity to create something or do something that expresses their personality and their ideas, that’s empowering.”

While some of the students expressed dreams of someday working in creative fields like music, fashion design, and animation, others drew themselves as anthropologists, rocket scientists, and athletes. That’s a fitting result considering the intent of the exercise wasn’t to nudge the students into any one specific track, but rather toward anything and everything they might be interested in.

“Creativity is an important aspect of whatever job you go into, because you need it to solve problems,” said Oliver. “We want to empower our Challenge Scholars to use their creativity to advance whatever it is they want to do with their own personal story.”

"It's been a pleasure working with the Grand Rapids Community Foundation Challenge Scholars these past two years; they bring an energy and enthusiasm to our programs that creates an enriching educational experience for all involved," said Continuing Studies Director Brenda Sipe. "It's inspiring for both the teachers and the students to see the kind of impact creative exploration can have on young, developing minds." 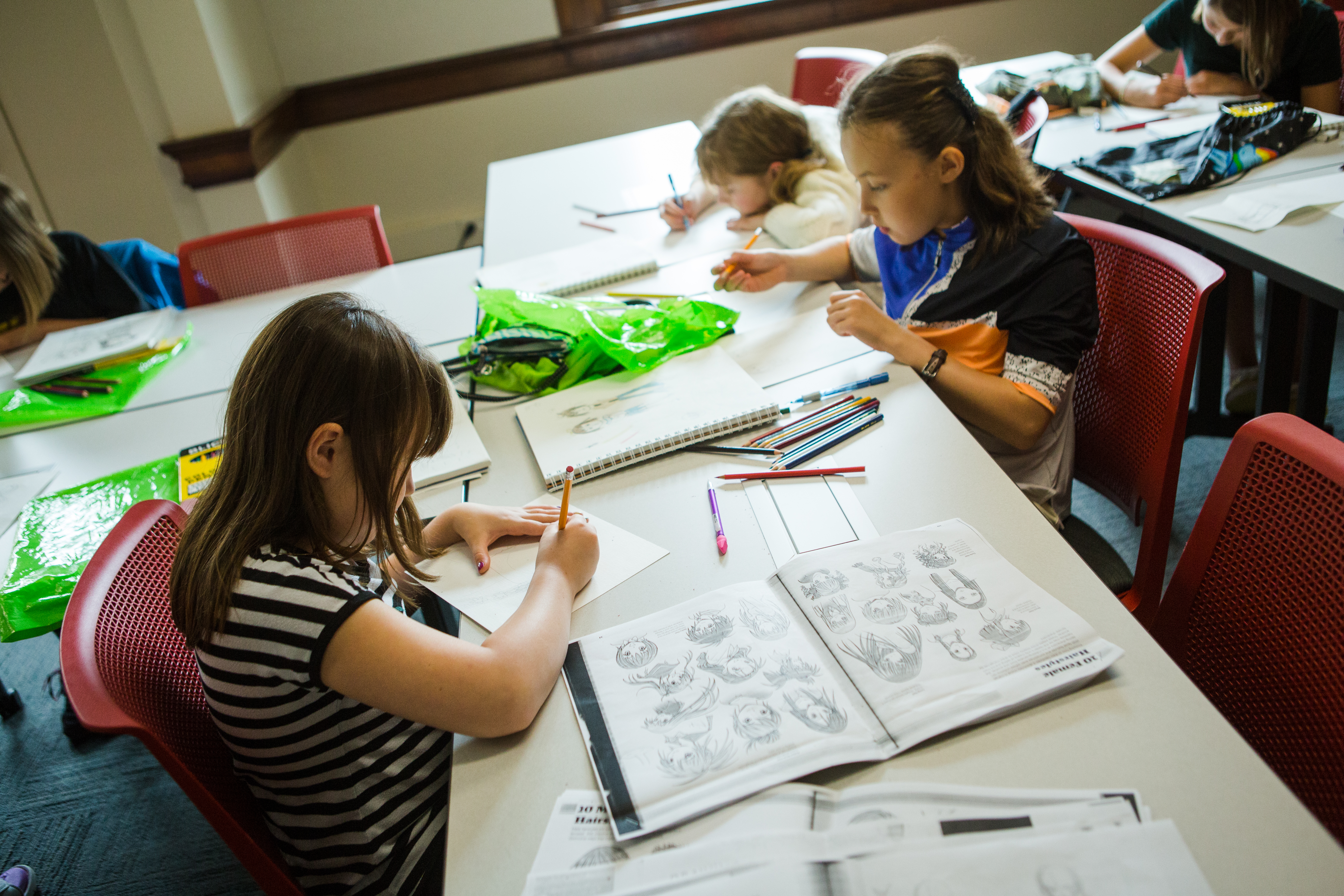 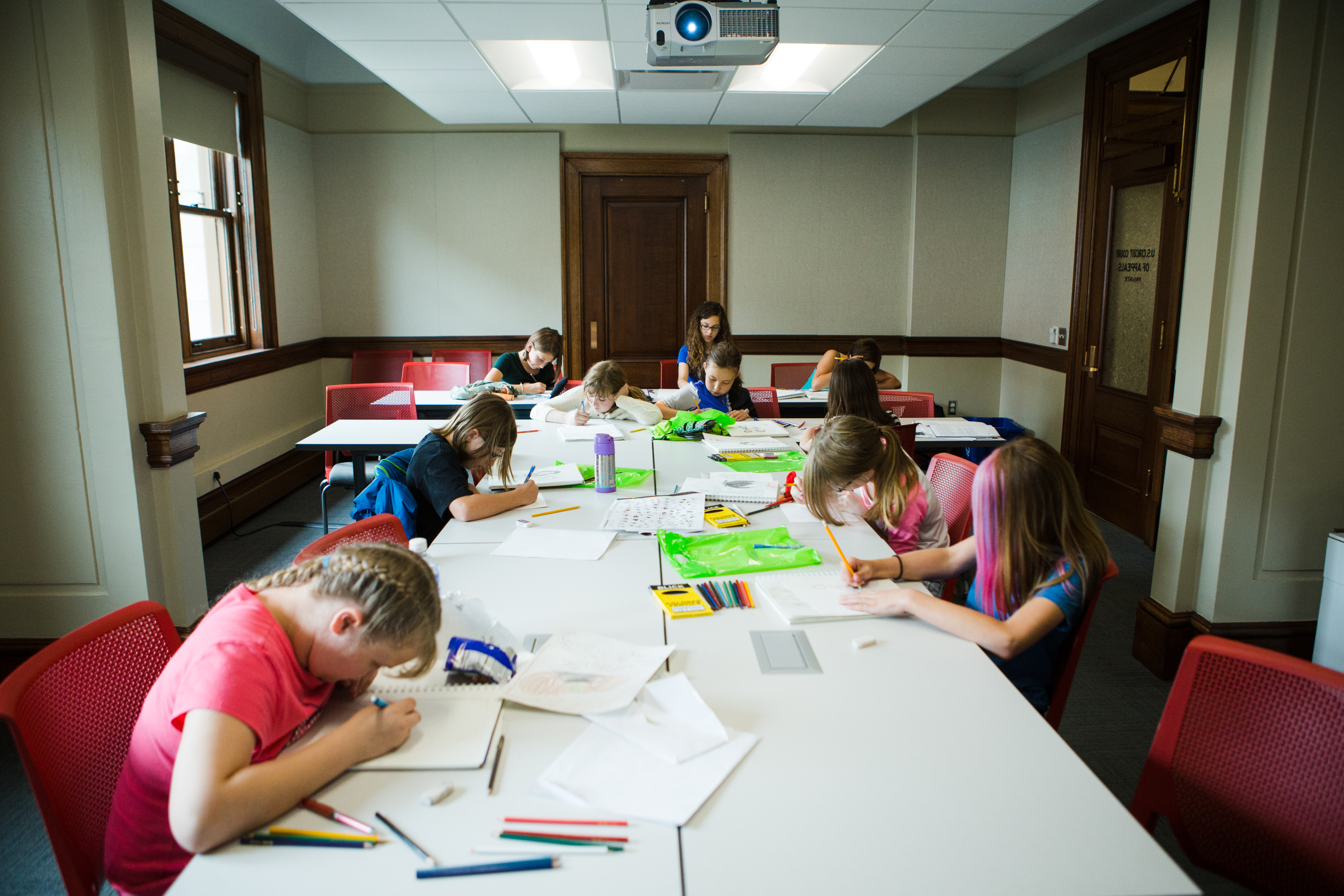 Oliver added, “We love exposing our students to opportunities to practice their skills and learn new ones, and it’s even better for them to do it at a college right here in Grand Rapids. Experiences like this help them to own their identity and be proud of who they are so they don’t feel lesser when they walk into a college or university as a student later in life. We want them to feel that college is a place for them, that it’s theirs – that’s a powerful thought.”