I was talking with Christopher Hanks, principal of Grand Rapids Public Schools’ new Museum School, when a giant brown bear poked its head into the room.

Well, actually, it was a taxidermied brown bear that was being moved to make room for the Museum School’s inaugural cohort, which begins its first day of classes on September 8. I watched as Hanks leapt up to assist the two people – a Museum School teacher and one of the school’s community partners – who were struggling to wedge the bear’s massive bulk through the doorframe. Working together, they assessed the situation, made a few mental calculations, and slowly began rotating the bear, tweaking their strategy on the fly until it was safely inside the room.

It was a telling moment. The principles of design thinking, collaboration, and creative problem solving are so deeply embedded into the Museum School that they inform everything that happens here, from the smallest routine organizational tasks to the overarching vision for the school’s immersive and experimental learning environment.

“We’re building a culture here, so we need to emphasize from day one that this is not your typical school experience,” says Hanks. “In seven years, this first cohort of students will become our first graduates, so they’re the ones that are going to help us design the experience and teach future Museum School students how we do things.” 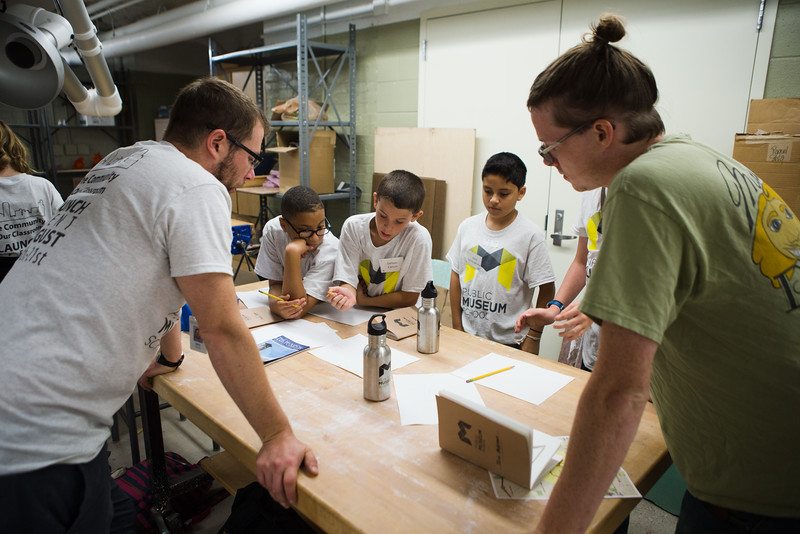 As part of a student retreat held near the end of August, Museum School students worked on a collaborative design thinking project at KCAD

Kendall College of Art and Design of Ferris State University (KCAD) has been instrumental to the shaping of the Museum School’s cultural framework, contributing broad expertise in design thinking and experimental education as the school grew from concept to reality. But now that classes are set to begin, it’s the students themselves who will be largely driving the culture of their school. To help set the stage, KCAD faculty members Cindy Todd, chair of the Art Education program, and Gayle DeBruyn, chair of the Collaborative Design and Furniture Design programs, worked with Museum School Curriculum Integration Specialist Kim Rowland to design a three-day student retreat near the end of August that introduced the students to the tools, processes, and environments they’ll be leveraging throughout the school year.

Central to the culture of the Museum School is the idea that the entire Grand Rapids community is a classroom. During the retreat, students traveled around town to places like KCAD, Grand Valley State University (GVSU), City Hall, the Grand Rapids Art Museum (GRAM), Urban Institute for Contemporary Arts (UICA), and the Grand Rapids Public Library, which will be woven into their curriculum. Along the way, they were invited to explore each place and discover more about its significance in the history of Grand Rapids.

Afterwards, the students returned to KCAD to channel what they’d learned, working in teams to create letterboxes for each location that communicated their findings. They then had to present their projects to their parents, and were given full control over what information they would present and how they would present it as a group.

(above): Museum School students working on their letter box; (below): Students presented their finished letter boxes to their parents inside the Grand Rapids Public Museum 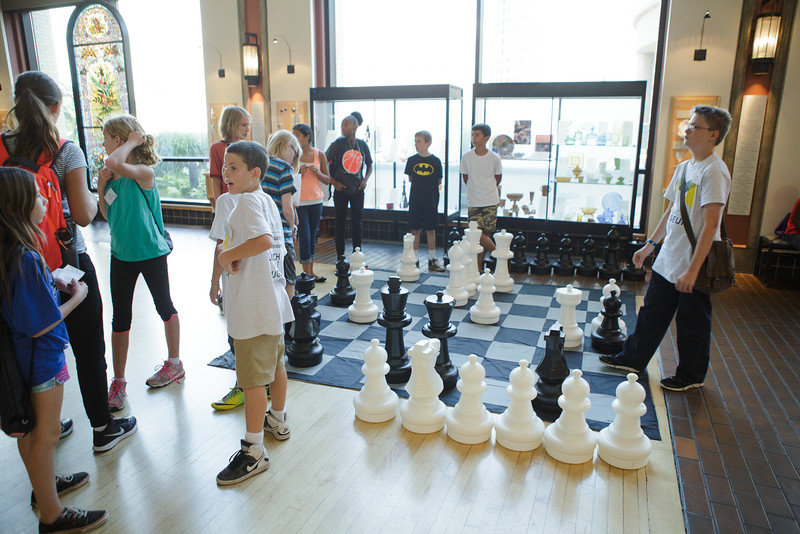 “They were working in teams, which meant that they were getting to know their classmates, and we had them going through a design thinking process where they had to come up with a bunch of ideas about how to share their information and then test them all out to see what worked and what didn’t,” says Rowland. “They had to treat the task like a problem and then get creative in solving it. Later, they’ll have experience to pull from when we need to go through that design thinking process again.”

Todd says she was struck by how quickly students embraced what was, for them, an entirely new and different way of thinking and working. “Design thinking requires a high level of interaction and collaboration, and because of that the majority of students were already bonding with one another on the very first day of orientation. They hadn’t just been sitting and listening to a long list of rules and procedures; they were active, walking the city and solving problems together. I had three students approach me independently to say that they had never been excited about the start of school until they were accepted into the Museum School.” 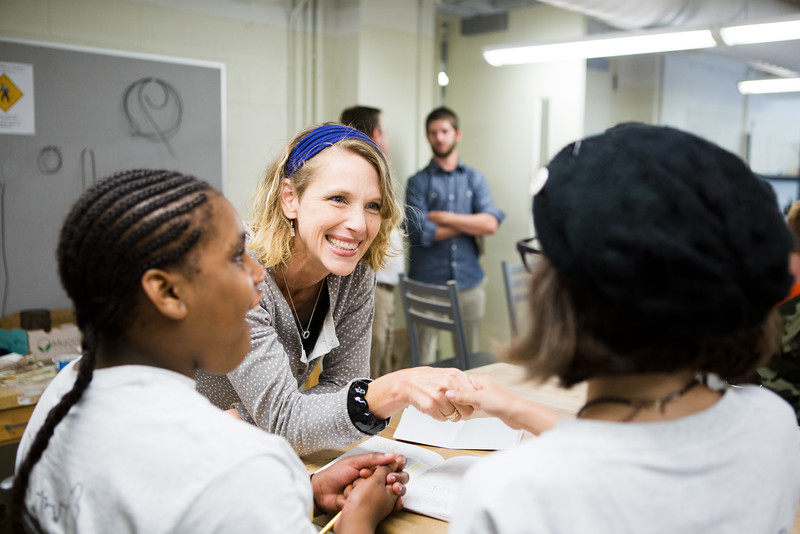 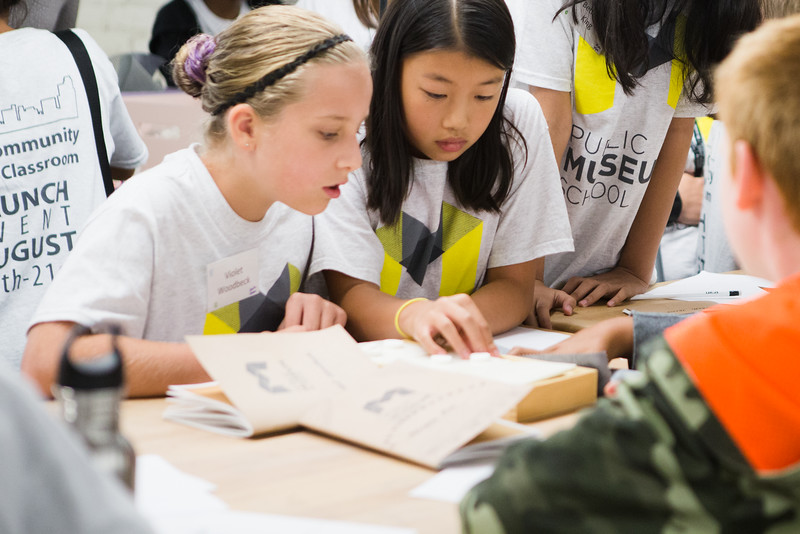 Students will explore these tools, places, and processes more fully as the Museum School’s innovative curriculum unfolds. By empowering students to take a more active role in their education, Hanks believes that the curriculum embodies a larger paradigm shift in the world of K-12 education.

“One of the questions we heard over and over from kids during the student retreat was ‘is this what it’s going to be like to go to school here?’ and that’s what we wanted,” he says. “We want to transform the students from consumers of education to producers of it.” 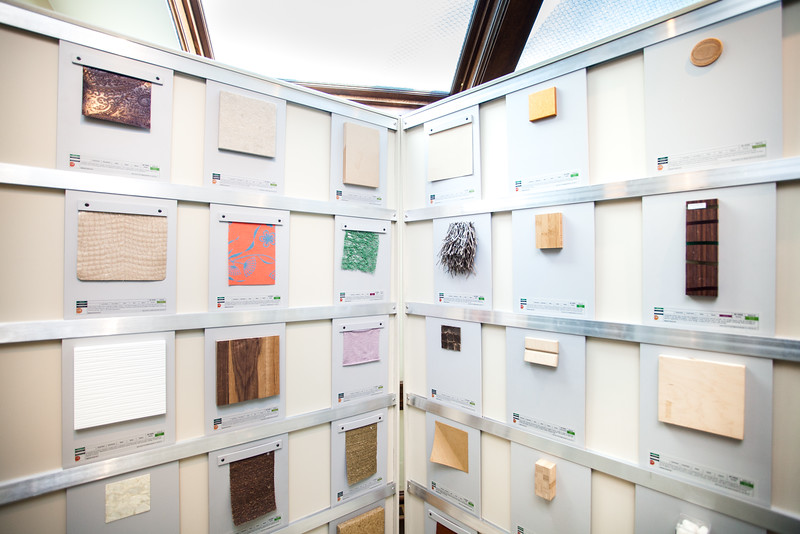 KCAD's Material ConneXion library features samples of over 1,000 of the world's most advanced, innovative, and sustainable materials

“To imagine a classroom that is the city of Grand Rapids is an audacious and exciting design project,” says DeBruyn. “It’s exciting for KCAD to be involved with these students, and we look forward to understanding how we can best support and encourage their learning experience.”

The Museum School’s after school programming, dubbed Lyceum, provides further opportunities for KCAD and other community organizations to interact with Museum School students. In hour-long courses held once per week, students will be matched with community experts in various areas – anything from musical instruments to archaeology to fly-fishing – and anyone in the community can propose an idea for a Lyceum course.

“Students don’t just learn between 8:30 and 3:30, and even though we’re getting them out into the community and exposing them to all these new experiences, we may not hit on something that they’re particularly excited about,” says Rowland. “We want to tap into their interests and help them develop hobbies they may not be able to explore otherwise.”

But before the potential of interacting with the external community can be realized, Rowland says the Museum School must first build a strong sense of internal community. “We’re focusing on building community amongst the students as well, allowing them to have a voice, to have teachers that are doing things with them, not for them or to them. It really is this community culture, and we’re going to be very deliberate about setting aside time to build that. I think students are already, and will continue to develop this sense of belonging to the Museum School.” 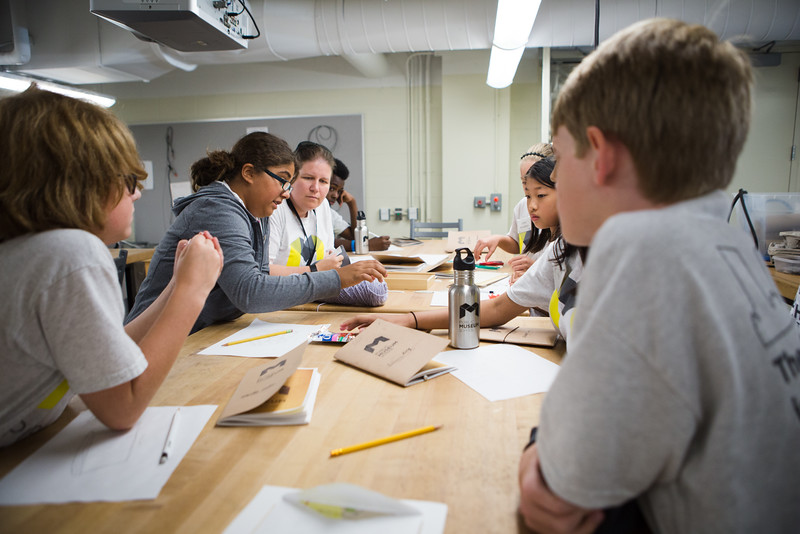 Exactly how the culture of the Museum School will deviate from what many consider to be embedded flaws in the traditional culture of American education remains to be seen. However, as Einstein once famously said, insanity is doing the same thing over and over again and expecting different results. By embracing radically new ideas about education and not being afraid to experiment with new methods and models, the Museum School is well positioned to prepare students for the unforeseen challenges of a rapidly evolving world.

“We’re able to create something here that’s very different, and to be able to take the risk to say, ‘let’s try this and see how it goes’ – you don’t encounter that in a lot of places,” says Rowland. “I’m thrilled to be a part of it and I think the kids are going to benefit immensely.”