Darlene Kaczmarczyk, Architect of the Photography Program, Retires After 18 Years at KCAD

It isn’t easy to walk away from something you’ve helped build from the ground up, but Darlene Kaczmarczyk finally feels ready to do just that.

This December, Kaczmarczyk announced her retirement from Kendall College of Art and Design of Ferris State University (KCAD) after an 18-year career that saw her grow from teaching intro to 2-D design classes as an adjunct instructor to teaching photography classes as a professor to helping the college launch a full Photography BFA degree program in 2005, which she would go on to chair for nearly a decade. 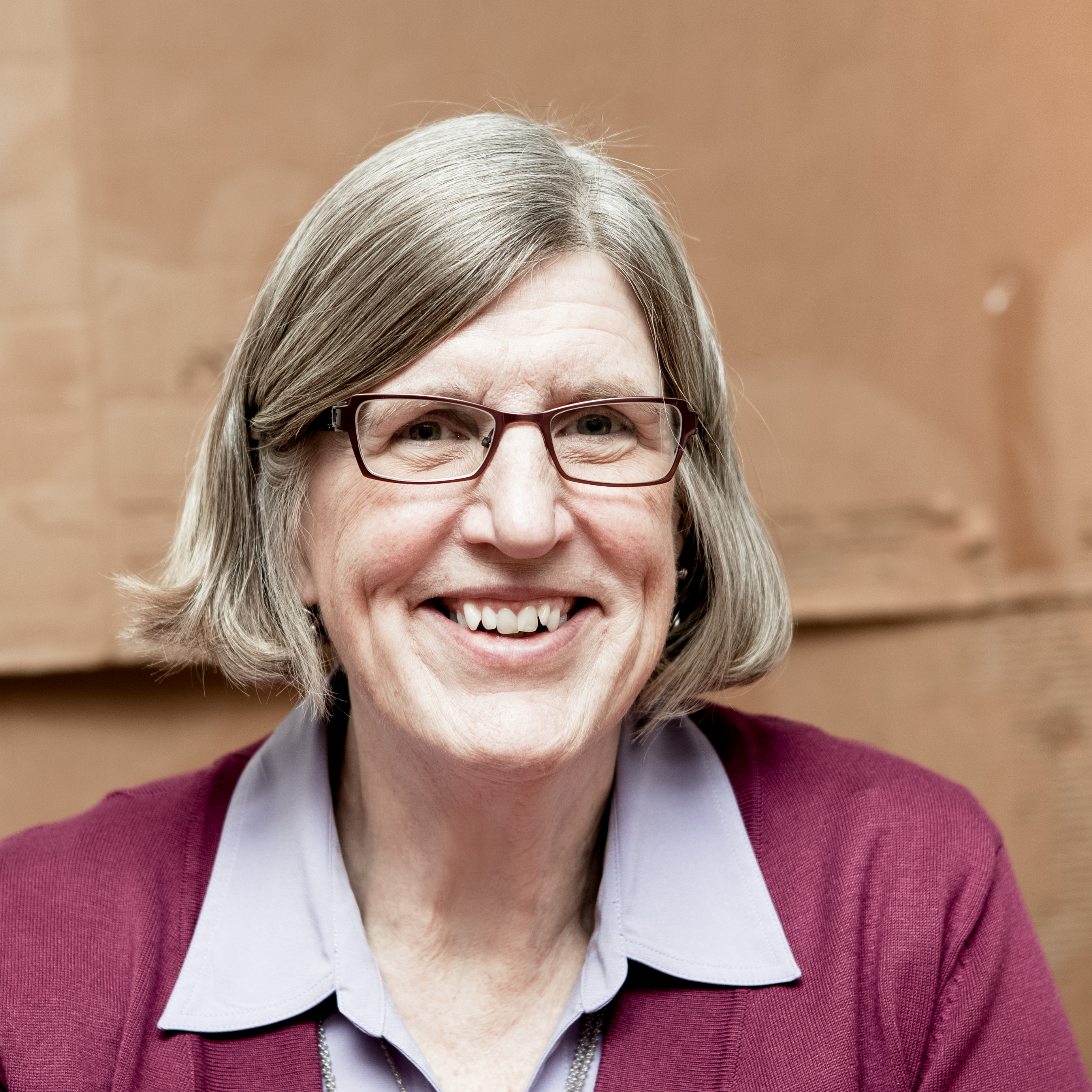 One might expect her enormous influence on the program’s development to result in some lingering attachment, but she’s confident that its future is in good hands.

“That’s the normal way things should happen; they shouldn’t stay the same forever,” Kaczmarczyk says of passing the reins to Professor Adam DeKraker, current chair of the Photography program, and Assistant Professor Leah Gose. “Adam and Leah are both excellent artists and educators, and they’re two very different people, which is important because the Photography program needs that diversity in perspective.”

Kaczmarcazyk’s own perspectives on photography and education are incredibly broad, due in part to the fact that she didn’t initially set out to become a teacher or a photographer at all. While studying philosophy at Grand Valley State University (then called Grand Valley State College) as an undergraduate in the mid-1970s, Kaczmarczyk developed a side interest in photography that quickly blossomed into a full-blown passion. After graduating, she was offered a job shooting promotional photography for Grand Rapids Community College (GRCC) (then called Grand Rapids Junior College) that eventually opened up an opportunity to teach photography classes.

“It came out of the blue,” Kaczmarczyk said of her first foray into teaching. “It sounded like it’d be fun and I certainly could teach a beginning photography class by that point. I just loved it immediately. It was so rewarding.”

Kaczmarczyk would spend 18 years at GRCC, earning a Master of Arts in Photography from Columbia College along the way in 1990. Then, in 1996, the opportunity to teach at KCAD arose. Though she didn’t start out teaching photography classes, she felt an immediate affinity for KCAD’s highly-focused creative culture.

“I loved KCAD right away,” she says. “So many students I’ve encountered here come from places where they had these intense interests that nobody else seemed to have, and they’d get here and it was kind of like they could stop holding their breath, like it was such a relief to be amongst people that get them. It’s really a cool thing to see.”

In 1998, Kaczmarczyk got the call to teach photography at KCAD full time. As the only professor teaching photography, she was able to shape the college’s photography curriculum into one that blends technical aspects such as equipment operation, lighting techniques, and film processing with the philosophical underpinnings of the medium.

Much of Kaczmarczyk’s own ideas about how photographs are understood were influenced by the writings of French philosopher Roland Barthes, in particular his 1964 essay “The Rhetoric of the Image” in which he frames the photograph as a paradox that presents both an illusion of literal reality and a multitude of signs and symbols from which different viewers can decode different messages and meanings. The essay would become a staple of Kaczmarczyk’s photography seminar classes at KCAD.

“That essay was really instrumental in the way I think about how photography makes meaning, how we understand it, because it’s obviously not the same way we understand words,” she says. “There’s a lot unspoken in a photograph that we understand even if we can’t always verbalize it.”

In the years before KCAD had a formal Photography program, explorations of the history and philosophy of photography coupled with hands-on technical instruction in the college’s darkroom and other facilities drew students from a variety of different disciplines into Kaczmarczyk’s classes.

“Some of the best students I had in those classes went on to become some of KCAD’s finest painters and drawers,” says Kaczmarczyk.

When the Photography program was established in 2005, Kaczmarczyk found herself armed with a whole new level of resources and infrastructure to build with. As photography began transitioning toward digital tools, technologies, and processes, and as students began to gravitate towards different career paths, she strove to use those resources to ensure the program remained committed to giving students a holistic perspective.

“When photography was part of the fine art program, students were looking at a broad range of opportunities for their professional careers. Now we have students who are looking at more applied photography types of careers, and we also have that traditional fine artist who wants to make work and maybe sell it, certainly exhibit it,” she says. “But It doesn’t matter which direction they’re going in; all photographers need to know the same things.”

While acquiring and implementing cutting-edge digital cameras, digital printers, and image processing software became a priority, it was not at the expense of what had come before.

“Understanding what’s been done before in terms of history and technique and process is critical to understanding what’s next,” she says. “There’s this alchemy that goes on in the darkroom that’s just exciting for a lot of people. You really have to work for it and I love that aspect. And the longer I taught the more I recognized I loved the research component of teaching.”

Kaczmarczyk’s dedication to giving students the best of both worlds – past and present – is even more relevant in the program today. She admits feeling pleasantly surprised at how many students at KCAD still work in a hybrid style that incorporates both digital and analog technologies.

“I expected that by this point in time, students would be producing work all digitally, but we still have a lot of students doing hybrid work, where they’re capturing images on film and printing them digitally,” she says.

No stranger to the program’s facilities and resources herself, Kaczmarczyk believes that motivating faculty to continue following their own artistic pursuits is a big part of what makes KCAD’s creative culture so special. During her tenure as President of the KCAD Faculty Association, Kaczmarczyk did her part to help promote that culture by leading the negotiation process that resulted in the contract that KCAD faculty members still work under today.

Kaczmarczyk with KCAD Director of Exhibitions Sarah Joseph at Fountain Street Church in 2005 during an opening reception for an exhibition of work Kaczmarczyk created during her first artist residency. (image courtesy of Darlene Kaczmarczyk)

“I love that KCAD really encourages faculty to be producing work all the time, because it helps us stay in touch with the struggles our students can have with the creative process, she says. “Seeing our struggles can humble them, because it helps them remember that nobody makes great work easily. I think it gives us as faculty members more credibility with the students too.”

In terms of her own work, Kaczmarczyk has long been focused on exploring the role of photographs in advertising, particularly advertisements aimed at women in the 1950s. Outside of her work on campus, she’s undertaken a number of artist residencies during her time at KCAD, including stints at Hambridge Center for the Arts in Georgia, the Virginia Center for the Creative Arts, and the Golden Apple Art Residency in Maine. She’s also maintained a close circle of creative accomplices throughout her career that act as a sounding board for new ideas and new work. 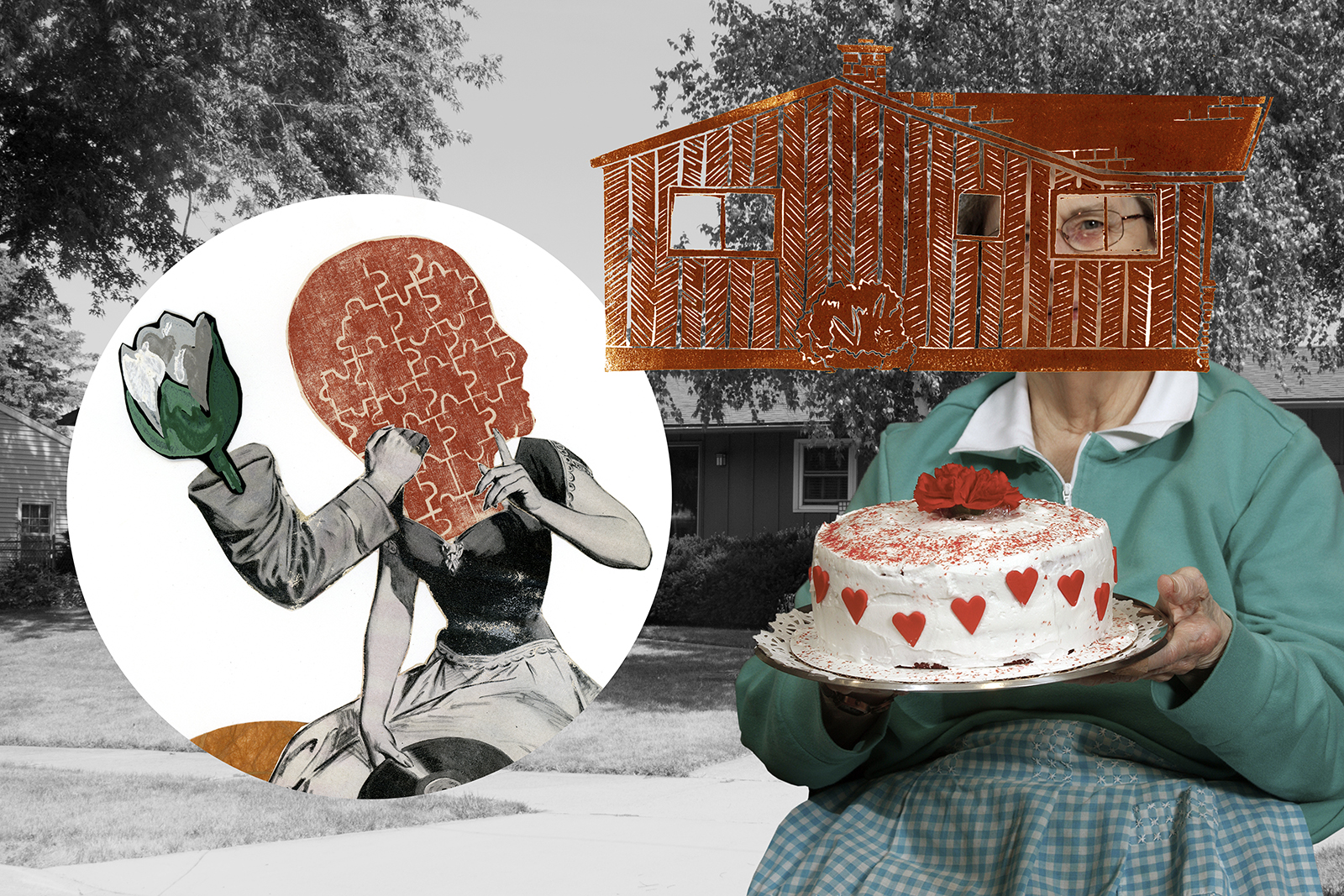 (above and below): Untitled pieces from Kaczmarczyk’s 2016 “Homecoming” series (images courtesy of the artist). 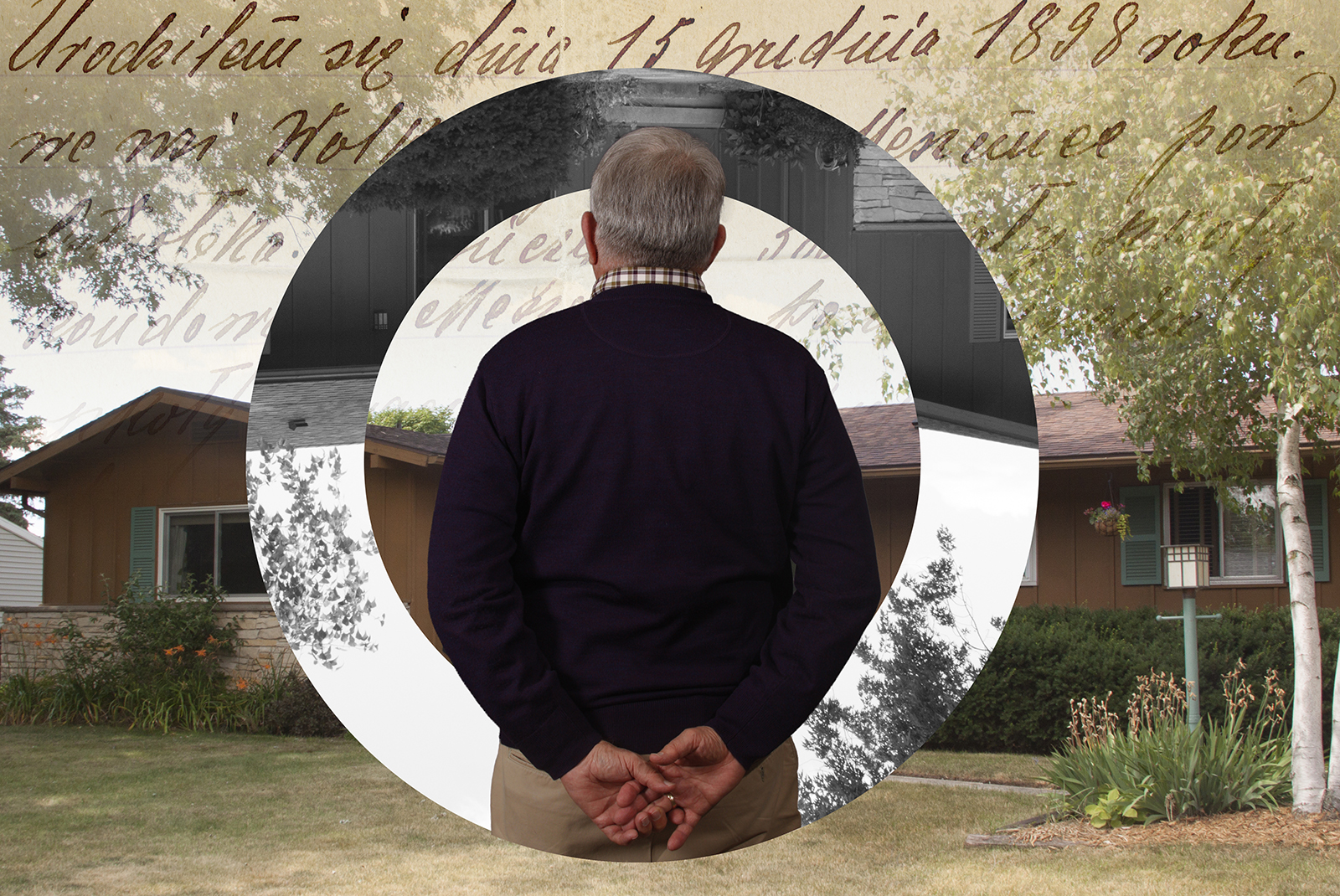 “It’s critical to get that feedback and dialogue on your own work, as well as see what people in other fields are working on, because everyone sort of struggles with the same things,” she says.

Maintaining a strong exhibition presence throughout her career has also fueled Kaczmarczyk’s growth, both as a teacher and as an artist. Her work has been featured in galleries throughout the United States, most recently at institutions like Root Division Gallery in San Francisco and Pond House Gallery in New York. In 2014 she exhibited her work internationally for the first time in Greetings from the West to the East, an exhibition of KCAD faculty work shown at the Shanghai Meilidao International Art Institution in Shanghai, China. Pieces of hers are also included in the permanent collections of the Grand Rapids Art Museum, Urban Institute for Contemporary Arts, Grand Valley State University, Priority Health, and Lake Shore Bank.

Kaczmarczyk has also made it a priority throughout her career to stay involved in higher level dialogues surrounding the history, philosophy, and pedagogy of photography. She has presented her own academic research numerous times at national and regional conferences of the Society for Photographic Education (SPE), most recently giving a presentation on changes in food photography at the 2015 SPE National Conference in New Orleans.

Photo by Kaczmarczyk on display on a billboard during ArtPrize in 2009. (image courtesy of Darlene Kaczmarczyk)

Now, Kaczmarczyk is looking forward to the time her retirement will afford her to pursue more artist residency opportunities and develop a new body of work exploring the impact of Alzheimer’s disease. She also wants to spend more time volunteering for organizations like Habitat for Humanity, and is working with a friend to develop an idea for a service that helps fine artists with aspects of their career such as branding, self-promotion, and navigating copyright law. 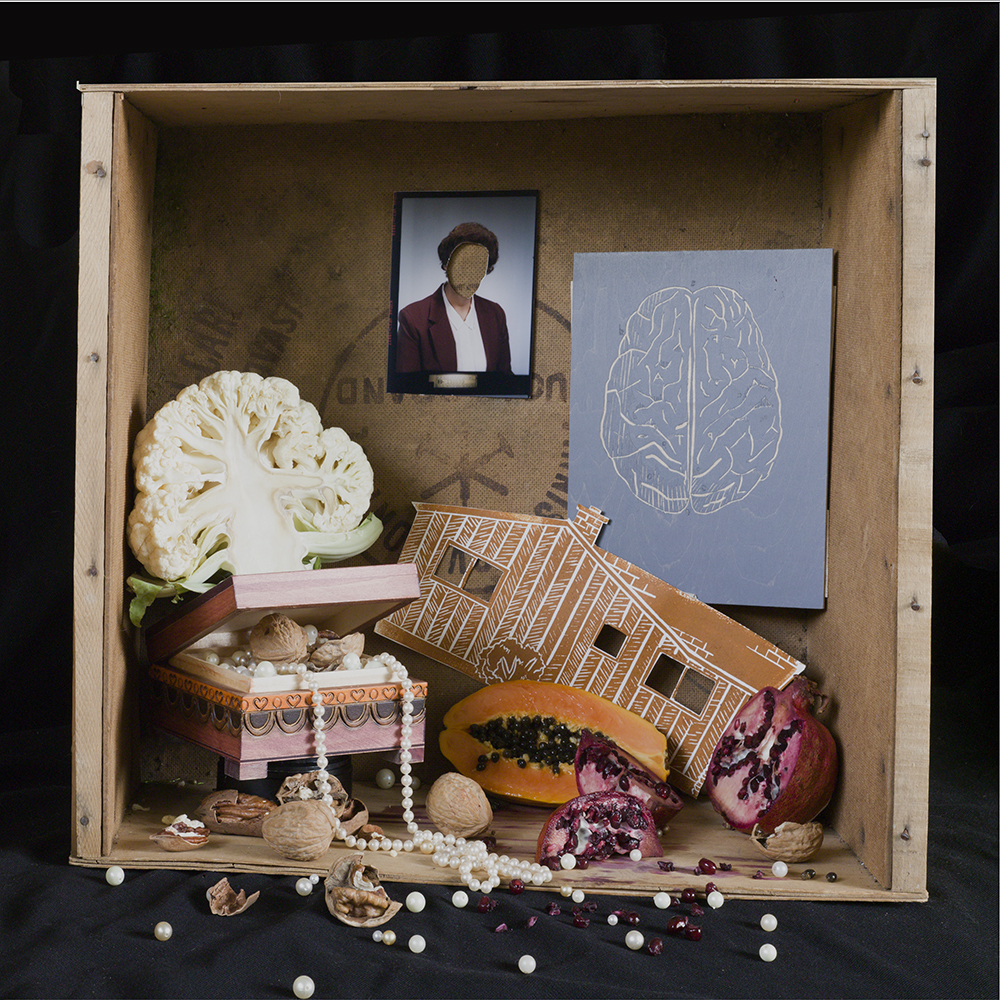 Still, Kaczmarczyk admits that she’ll miss the faces and places at KCAD that have made her career special, and the college will in turn miss the passion, curiosity, dedication, and leadership she brought to campus and to the KCAD community. But she continues to embrace the philosophy that the next great opportunity is always right around the bend.

“I’m prepared for the fact that it’s going to be pretty sad. I’m going to miss my colleagues and my students tremendously,” she says. “On the other hand, I’m thrilled to have the time to explore some really new and different things and work with a different population of people.”