Drawing Professor Deborah Rockman is ending her career at Kendall College of Art and Design of Ferris State University (KCAD) in the same way she began it: standing at a crossroads.

Rockman’s unwavering commitment to supporting students in all facets of their education has enabled her to make a world of difference in the lives of countless KCAD graduates. But after announcing her retirement this past spring, the woman who has dedicated herself to the art of teaching for the past 35 years is now wondering, what’s next?

“This is a huge life change, and I don’t know where it will take me,” Rockman admits. “It’s like starting teaching all over again, except this time I’m teaching myself.”

From Putting Down Roots to Planting Seeds

It’s hard to look at where Rockman is today—respected teacher, award-winning artist, published author—and see anything other than sure-footedness. But in the summer of 1983, she took one of the biggest risks of her life and walked away from her first full-time teaching job, a tenure-track position at a small university in a remote corner of Minnesota, with no prospects waiting for her and no idea what her next move would be.

Holed up in in her apartment filling out applications, she had no specific destination in mind other than an environment acutely focused on art and creativity. After a chance interview a few months later, she found that environment in KCAD.

“I came away from the interview impressed,” Rockman recalls. “Art and design was the sole focus here, and I saw a lot of potential for growth.”

From her first taste of teaching as a graduate assistant earning her MFA from the University of Cincinnati, Rockman knew she had found her calling. She also quickly understood that the influence she wielded in the classroom was not to be taken lightly.

“The responsibility I felt to my students was enormous, and I have felt that my entire career,” she says. “This is not something that you do half-assed or half-heartedly.”

Energized by her new surroundings at KCAD, she set about creating meaningful and formative educational experiences for her students. Rockman views drawing as a bedrock of any creative practice. From her early days teaching figure drawing classes to later developing and serving as Chair of KCAD’s BFA Drawing program, she’s advocated for, and proven, the importance of teaching students of any discipline what she calls “the essentials of seeing.”

“To sit somebody down and teach them how to really examine and observe something, and how to take what they’re seeing and translate it onto a 2D surface, it’s an amazing process,” Rockman says. “Drawing teaches us in the most fundamental way how to observe, how to think about space, how to break information down, how different materials work, and what kind of marks they can make. All of these things that are applicable to any discipline are first taught in drawing.”

While drawing courses have always been key foundational experiences for both art and design students at KCAD, under Rockman’s leadership, the Drawing program grew into a fertile environment for exploration and experimentation. Students began broadening their idea of what constitutes a drawing, making 3D objects and immersive environments, using digital tools and technologies, and incorporating elements of other disciplines into their work.

Today, Rockman says, the Drawing program reflects the contemporary art world, where more and more artists are fluid in terms of the kinds of materials, techniques, and processes they employ.

“We want to honor where our students’ interests take them. Once we’ve given them a very solid foundational experience with Drawing I and II and Figure Drawing I and II, then they start to move into more advanced classes and the pasture suddenly gets very big. You can’t see the fences anymore because there are none.”

Drawing students aren’t always initially comfortable navigating this kind of open-ended environment, however. Much of what has made Rockman such an effective teacher is her ability to connect with students on an individual level and respond to their ideas, interests, and skill level with the right kind of support and encouragement.

As a result, she’s helped make the Drawing program one wherein students are encouraged to explore and grapple with the conceptual underpinnings of their work as they’re honing their technical skills.

“We stress concept right from the get go. But we don’t want concept to happen without skill. And the starting skill level is different for each student,” says Rockman. “It’s a process where you have to read the student, to know how much you can push them and in what direction. So, I ask them: ‘What are you interested in? Why do you want to make art? What do you want to make art about?’”

The Artist as Teacher: A Circle of Influence

Rockman’s ability to guide her students’ artistic development stems from her own journey as an artist.

“The people who want to be fine artists all have things they’re trying to work through and figure out about their own life, and ultimately that leads them to look at the bigger picture,” she says. “It’s exactly the same experience I went through as a young artist.”

As a graduate student, Rockman developed a series titled “Black Sheep, Dark Horse” that set the stage for the themes and concepts she’s been exploring in her artwork ever since. The series, with its closely cropped images of areas of her body where she had long held tension and anxiety, represented her first foray into addressing social/cultural issues that are transmitted from one generation to the next.

Two years after earning her MFA, she came to KCAD, where she says her artistic direction really began to take form. In 1990, she debuted her series “Visions, Dreams and Memories,” images inspired by tumultuous experiences in her own family that reflected the constant burden of trauma and the ability of both the conscious and the unconscious mind to shape human experience. The series resonated in a big way with viewers, who saw their own experiences mirrored in Rockman’s. 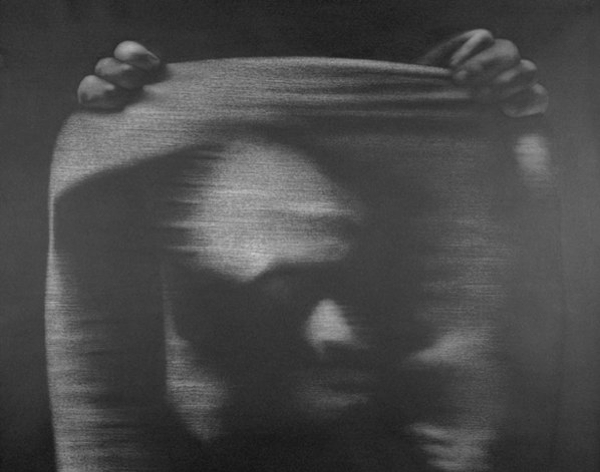 “In the Name of the Father,” from Deborah Rockman’s “Visions, Dreams and Memories” series (image courtesy of the artist)

“These images were about me, but they were also about me thinking about experiences that I knew many other people had gone through,” Rockman says. “These are the first pieces that prompted people to come up to me in tears saying how much they could relate to the work.” 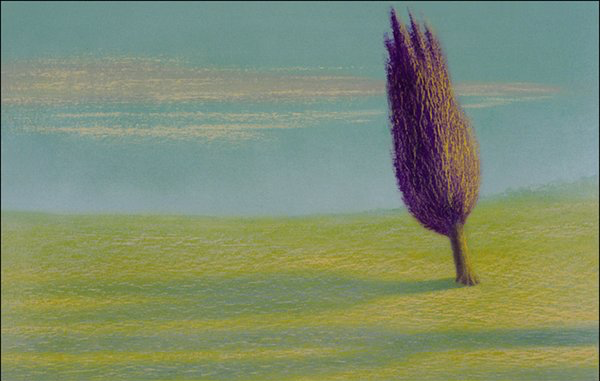 (above): “Oxbow Tree” from Rockman’s “Imagined Landscapes” series; (below): “A Nearly Perfect Cow” from the “Waging a Word War” series (images courtesy of the artist) 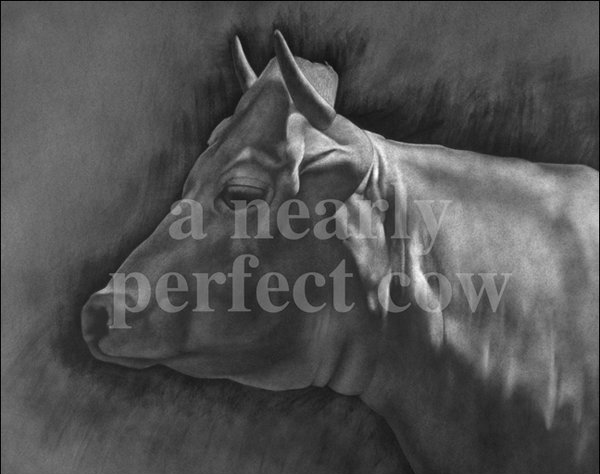 After creating “The Imagined Landscape,” another personal series featuring self-portraits cleverly disguised as landscapes, Rockman began looking outward for inspiration. She moved from one opportunity to say what she felt about the world to another, from commenting on how women are treated in American culture in the drawing series “Waging a Word War,” to critiquing false morality and religious hypocrisy in the collage series “Culture Vulture,” to imploring viewers to confront some of the deplorable conditions many children around the world are forced to grow up in with the digital series “Losing Sleep.”

With each new series, Rockman also expanded the reach and acclaim of her artwork. Today, she’s been featured in over 100 exhibitions throughout the U.S., Canada, and China, including invitational and juried exhibitions in New York and Chicago. She’s been spotlighted in the likes of NY Arts Magazine, Drawing Magazine, and the National Drawing Annual, and her pieces reside in a number of permanent collections. 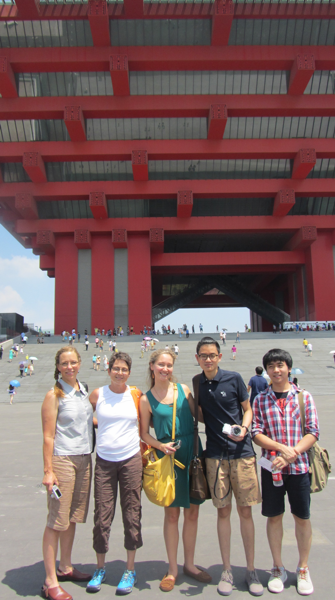 But rather than dulling Rockman’s edge, success has only sharpened it, fueling her desire to make work that makes a difference. Her three most recent series, “The Danger of Being Born,” “The Space Between Us,” and “Companions,” leverage technical and metaphorical elements to explore the juxtaposition between the idea of the seemingly blank slate all humans are born with and the harsh realities many children around the world are faced with on a daily basis.

“I’m not interested in beating around the bush; I want my work to have a strong impact,” says Rockman. “’Are you paying attention? And what are you doing about it?’ I just want people to reconsider.” 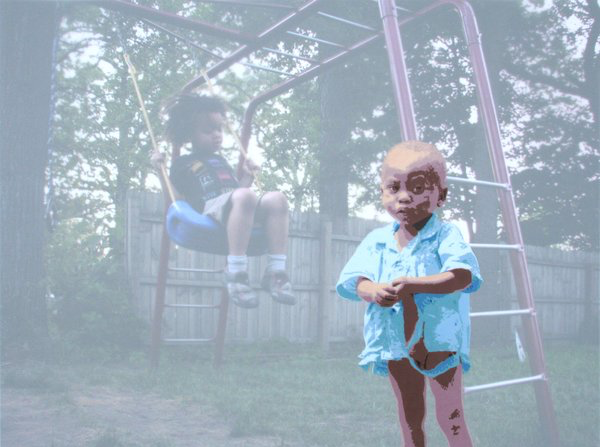 Like her art, Rockman’s teaching has always been about what’s beneath the surface. Under every assignment, critique, and technical demonstration, there lies a deeper lesson: how to be a student of the world.

“I’m challenging students to engage with the world as they see it and experience it,” says Rockman. “My job isn’t to tell them what to think; it’s to encourage them to be more open-minded and to think critically about everything. I love to watch students transform from freshman to senior year as they heighten their ability to think for themselves and start to see the world through a broader lens.” 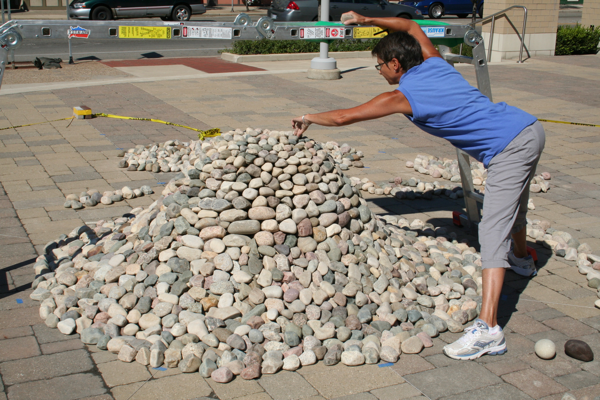 (above): Rockman creating “Six Kilograms,” an installation she entered into ArtPrize 2012; (below): the finished piece (images courtesy of Deborah Rockman) 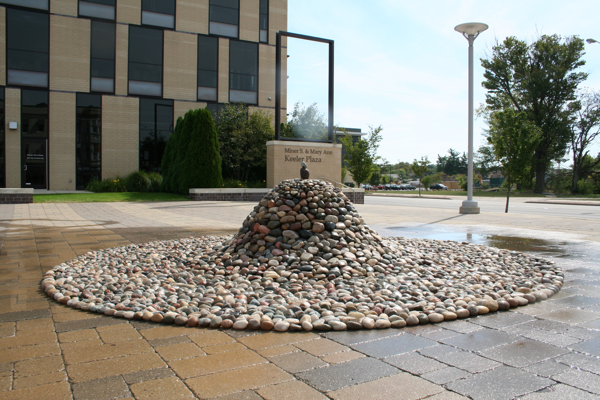 If leading students to a place of empowerment required Rockman to provide mentorship on a personal level, she never shied away. To her, teaching at KCAD entailed responsibility to the whole student, not just to the artist within them. That philosophy would become the core principle of The Art of Teaching Art, a book she first developed in the late 1990s to help new art teachers rise to the challenge.

Rockman says she created The Art of Teaching Art because she remembers how difficult it was find her footing when she was first embarking on her teaching career.

“I get a lot of feedback—emails, letters, online reviews, conversations—from people who have found guidance in the book,” she says. “To know that it continues to help people is an incredible feeling.”

Rockman’s other book, Drawing Essentials, is a veritable encyclopedia on drawing pedagogy, materials, techniques, history, and instructive examples. Published by Oxford University Press, the book has been used by countless teachers around the world to help their students cultivate a broad and meaningful understanding of drawing as an observational and creative practice.

“My early experiences studying art as an undergraduate were not great, so when I became a teacher I was determined to always provide my students with engaging and informative experiences,” Rockman recalls. “Around the late 90s, I started looking more closely at all of these very thorough handouts I’d created over the years— on color, process, scaling, sighting, etc.—and I thought, ‘I’ve got a book here.’” 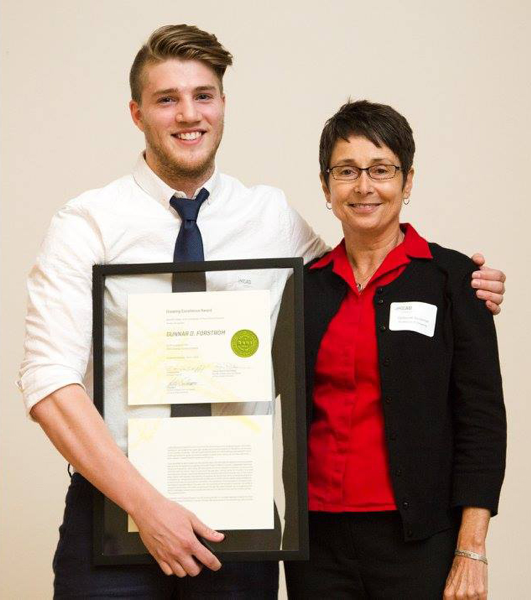 Rockman is currently working with Oxford University Press on the book’s fourth edition, responding to feedback from teachers who have used the book or are considering using the book in their classrooms

“It’s important to me that the book gets better with each edition,” she says. “I refuse to release a new edition for its own sake.”

As far-reaching and lasting as Rockman’s influence has been, the recipient of Ferris State University’s 2017 Distinguished Teacher Award and recently-appointed Professor Emeritus of KCAD knows her limits. In fact, she says that much of her artwork is “me looking around the world and being frustrated with what I can and cannot do.” But in her teaching, she’s always emphasized the “can.” 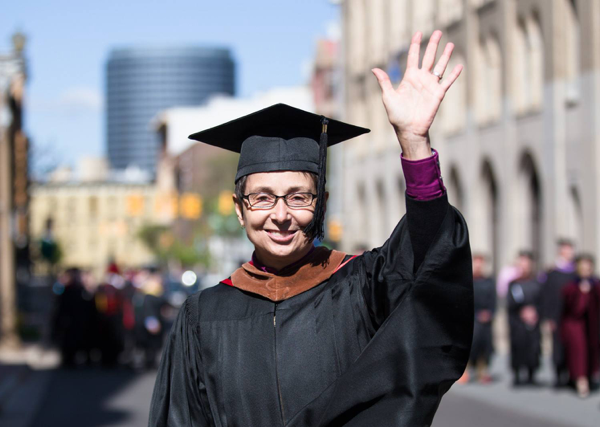 Rockman at KCAD’s 2018 Commencement ceremony, her last as a member of the KCAD faculty

With her teaching career now behind her, Rockman isn’t sure what lies ahead. But if there’s one thing she knows for sure, it’s that she’ll never stop creating.

“I make art because I don’t feel like I could live if I didn’t,” she says. “I have too much to say.”

Visit deborahrockman.comto learn more about Deborah Rockman and her work.