The mosaics sparkled. The architecture dazzled. But the most beautiful sight in Helen DeVos Children’s Hospital on May 30 was the faces of children lighting up at the sight of their own likenesses on display.

The patient portraits were the culmination of a class project proposed by Lisa Ambrose, adjunct instructor at Kendall College of Art and Design. Ambrose teamed with the hospital’s Child Life Specialists to create a special event linking her senior illustration students with children receiving treatment at the hospital. She explained, “Art and kids just go together. When you’ve got kids who are dealing with difficult things, it’s nice to give them something else to think about.”

“As illustrators, our job is to please our clients,” she continued. “I wanted to bring in someone from the outside so students wouldn’t be working for themselves or for me, but for someone else. There are a number of programs that do work involving veterans’ hospitals. Children are so inspired by art that I thought a project with the Children’s Hospital would be a positive thing for both the students and the patients.”

Each student was matched up with a young patient who volunteered for the program. Using materials supplied by Kendall, the patients created their own artwork under the guidance of the students.  “I enjoyed being there as a teacher, not just an artist,” said student Mike McClellan. “It was fulfilling to help someone else learn from something that I know how to do, and great to help people feel happy when they’re going through something so serious.”

While the patients were busy creating, Kendall students asked them to describe a few of their favorite things so they could get to know their young subjects.  They also photographed the patients so they could return to their studios to work on portraits of the children over the next few weeks. When the portraits were complete, each one was mounted on a panel beside the patient’s own work, creating an intriguing pairing that showed off both artists’ skills and visions.

On the night of the exhibit, patients and their families wandered into the sunlit cafeteria at the hospital. Often shy at first, they soon broke out in smiles when they saw their own faces on display.

Oscar Broca III looked in awe at his portrait created by Robert Babcock. It depicts Broca in the trademark stance of his favorite WWE wrestler, John Cena, looking every inch of the hero his mother, Amanda Pastor, says he is. “The artist did an amazing job,” said Pastor. “He even got his scars right.” 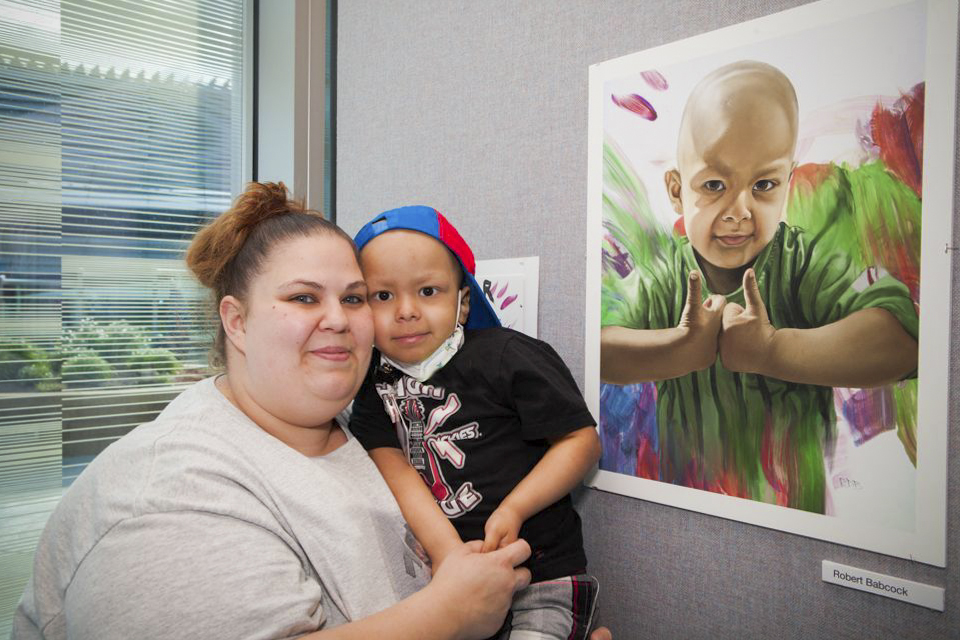 Amanda Pastor with son Oscar Broca III and his portrait by Robert Babcock.

Nearby, Angelica Munie and her family admired her portrait, noting how artist Everett Van Allsburg captured the highlights in her hair and the necklace she had drawn so carefully in her own artwork. “It was fun talking to him,” she said. “My picture is really pretty. I like it.” 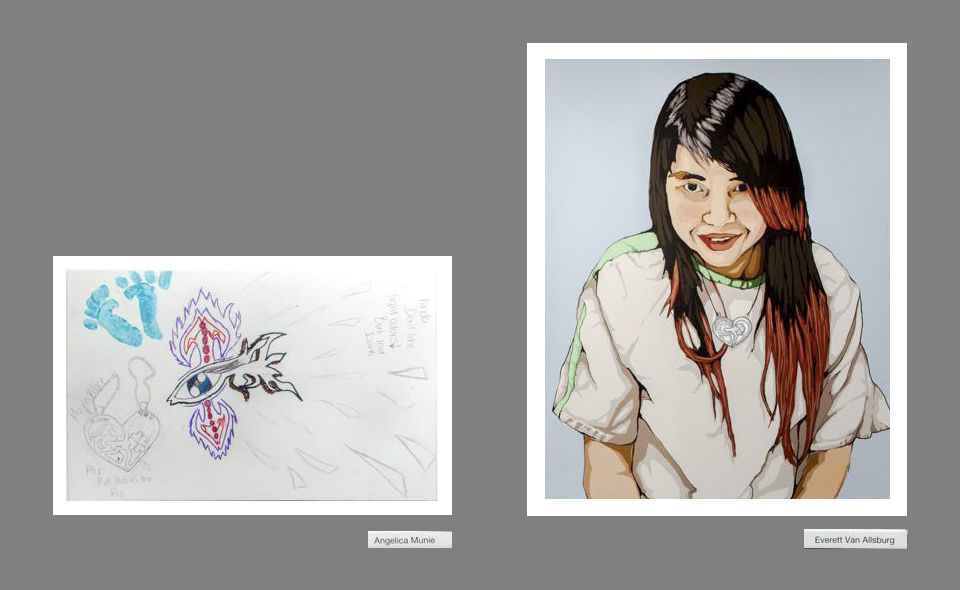 Angelica Munie's self-portrait next to a portrait of her by Everett Van Allsburg.

Lily Vanderbash was delighted with her portrait, “especially the purple cats,” she said. Her own artwork featured golden puff-paint curls and a polka dotted dress she described as “my dream dress.”  Artist Alexandra Johnson used those polka dots as a background for Lily’s portrait, adding polka dotted bows to several cats’ tails as well. 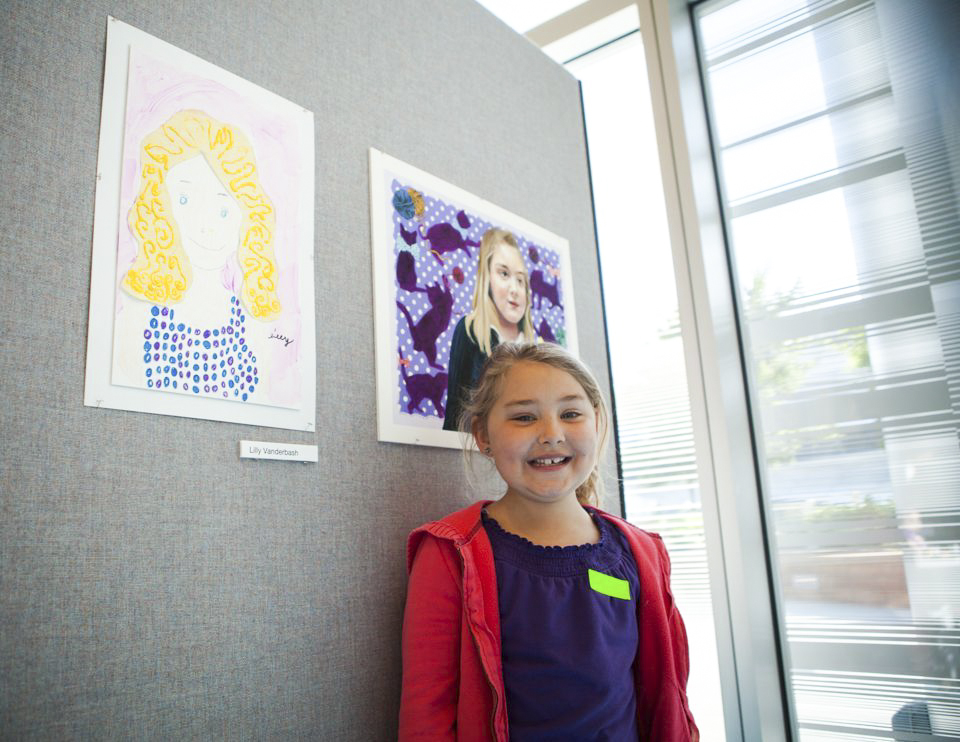 Lily Vanderbash with her self-portrait and portrait by Alexandra Johnson.

Annika Ohman‘s artwork most closely resembled her finished portrait by artist Madyson Brown. Her three-quarter view representation of herself showed a strong understanding of proportion and composition. Brown’s portrait created a mirror image of that view, adding more flowers and a beach on a sunny day to reflect Annika’s favorite things. “I had a long day at the clinic, but this changed a really hard day to a really fun one,” she said, beaming. 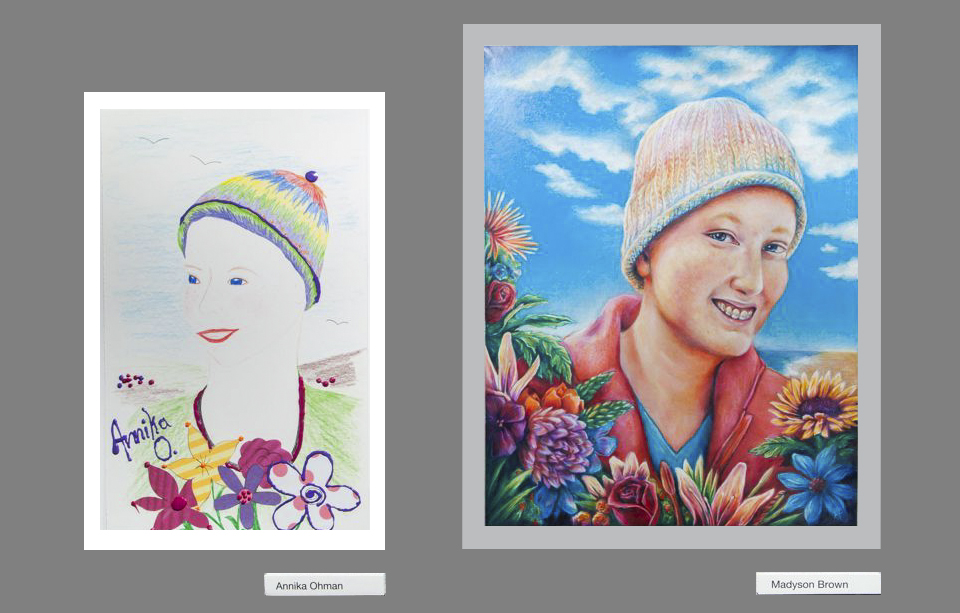 Annika Ohman's self-portrait next to the portrait of her by Madyson Brown.

Teenager Caitlin Sall was all smiles as she found her portrait by Mike McClellan, showing her with her hair pulled back and holding her favorite thing—her phone. “I’m always on it, constantly texting,” she said. “This is so cool. I’m really excited to take it home.”

Young Tyler Cooper pointed happily at his own face peering out the window of a train. Artist Aziza Abbasi said, “I painted him with a train because that was the toy he kept picking up when we were together.” Tyler’s mother was also thrilled with the portrait and planned to hang it in her son’s room. 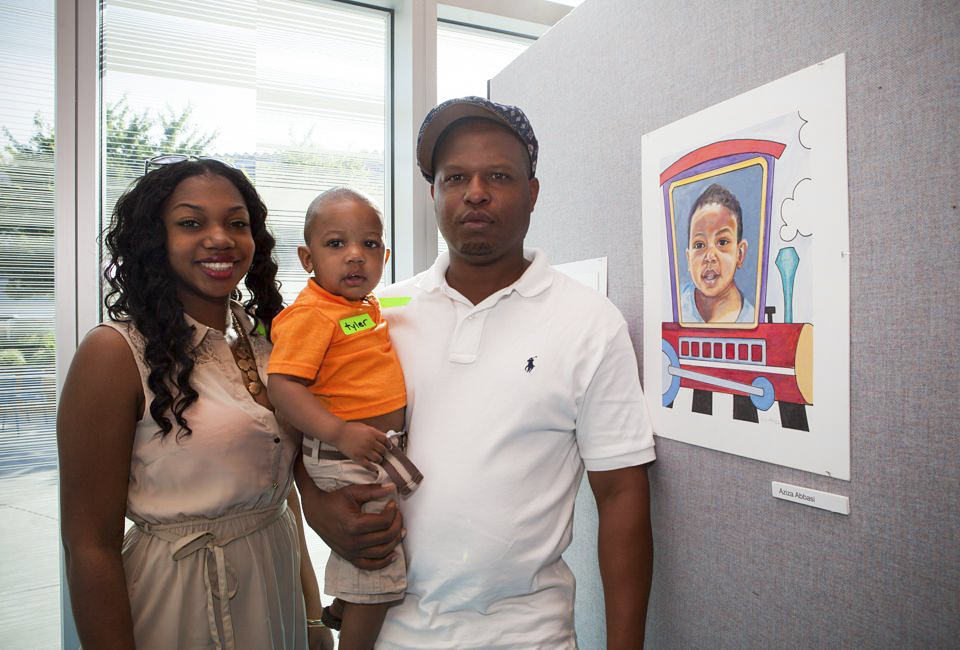 Tyler Cooper with his family and portrait by Aziza Abbasi.

As the evening ended, patients and their families were happily unpinning their portraits to take them home, pleased to have a record of their beautiful faces and a rare, 100% fun trip to the hospital.