From the mystic shores of Scotland to the ancient citadel of Machu Picchu to the depths of their own creative processes, sabbaticals lead Kendall College of Art and Design of Ferris State University (KCAD) faculty members to amazing places and transformative experiences. Now, a special exhibition inside The Fed Galleries is inviting audiences along for the ride.

On display until September 2nd, the Faculty Sabbatical Exhibition features five separate bodies of work, one from each of the KCAD faculty members who have recently taken sabbatical, that provide a unique window into the personal and professional journeys that inspired their creation.

Drawing professor Deborah Rockman, who spent the 2011-2012 academic year on sabbatical, is displaying a number of works from her series “The Space Between Us.” During her sabbatical, Rockman undertook artist residencies at the Ragdale Foundation in Illinois and the Virginia Center for the Creative Arts that afforded her the time and space to continue developing the series, began a few years prior as a way to explore the disparity in life experiences of children in different parts of the world. 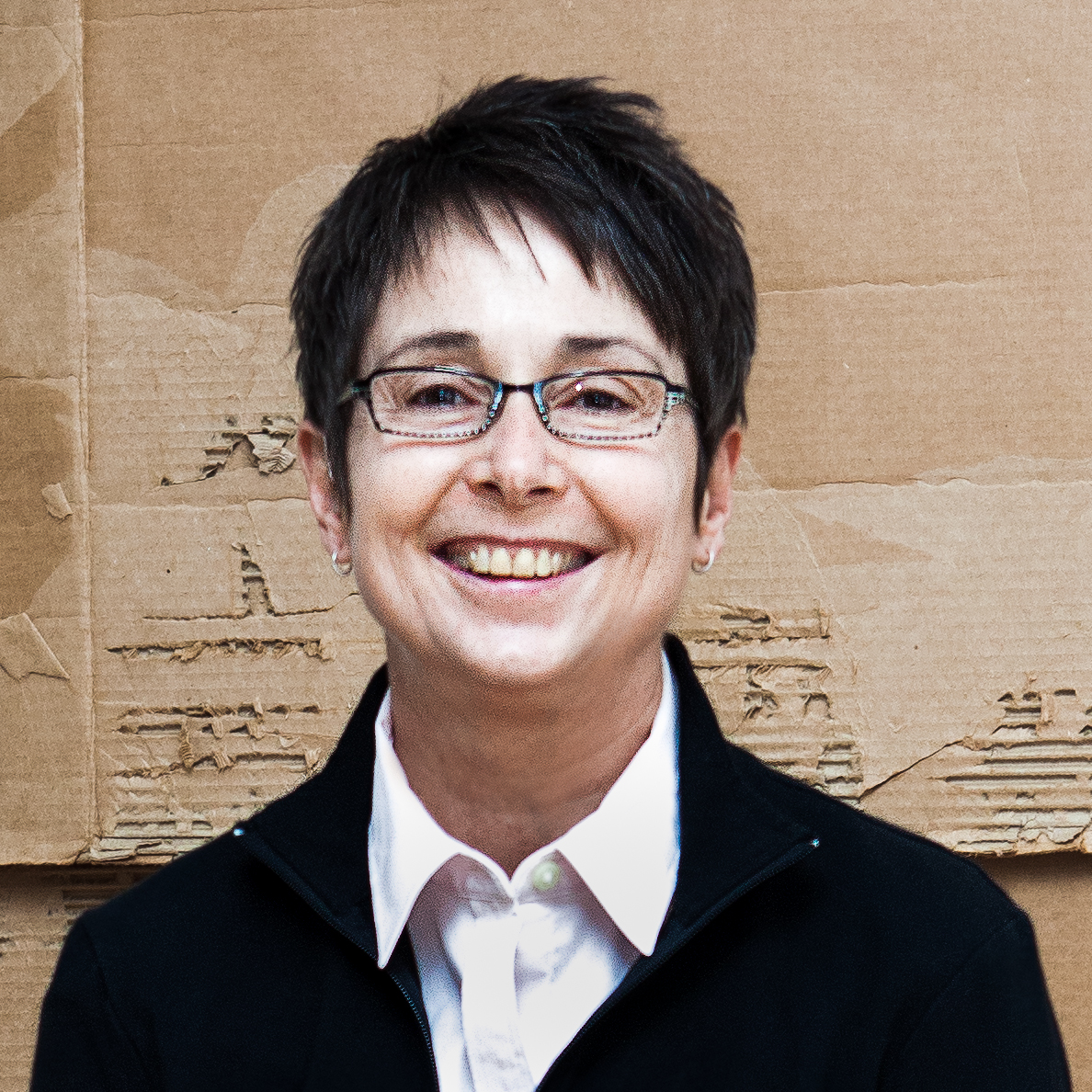 “In an artist residency, you don’t have to do anything but focus on your work,” Rockman says. “All the distractions that normally get in the way are removed, and that allows artists to really be focused in the studio. It changes the way you’re thinking about the work and how you’re executing it.”

Each work in “The Space Between Us” combines found photographs with drawings to create jarring visual and cultural juxtapositions between children who have all of their basic needs met and those who do not. “I feel like I show people things that they don’t want to see in a way that’s visually beautiful,” Rockman says. “I try to bring my drawings and the found images together so that it doesn’t feel like the children are in radically different worlds, even though they are.”

Rockman says her sabbatical experiences strengthen her ability to help her students, both graduates and undergraduates, learn how to better develop the conceptual aspects of their work. “I really encourage my students to focus on social and cultural ideas because I want them engaging with the world and thinking carefully about how they fit into it.” 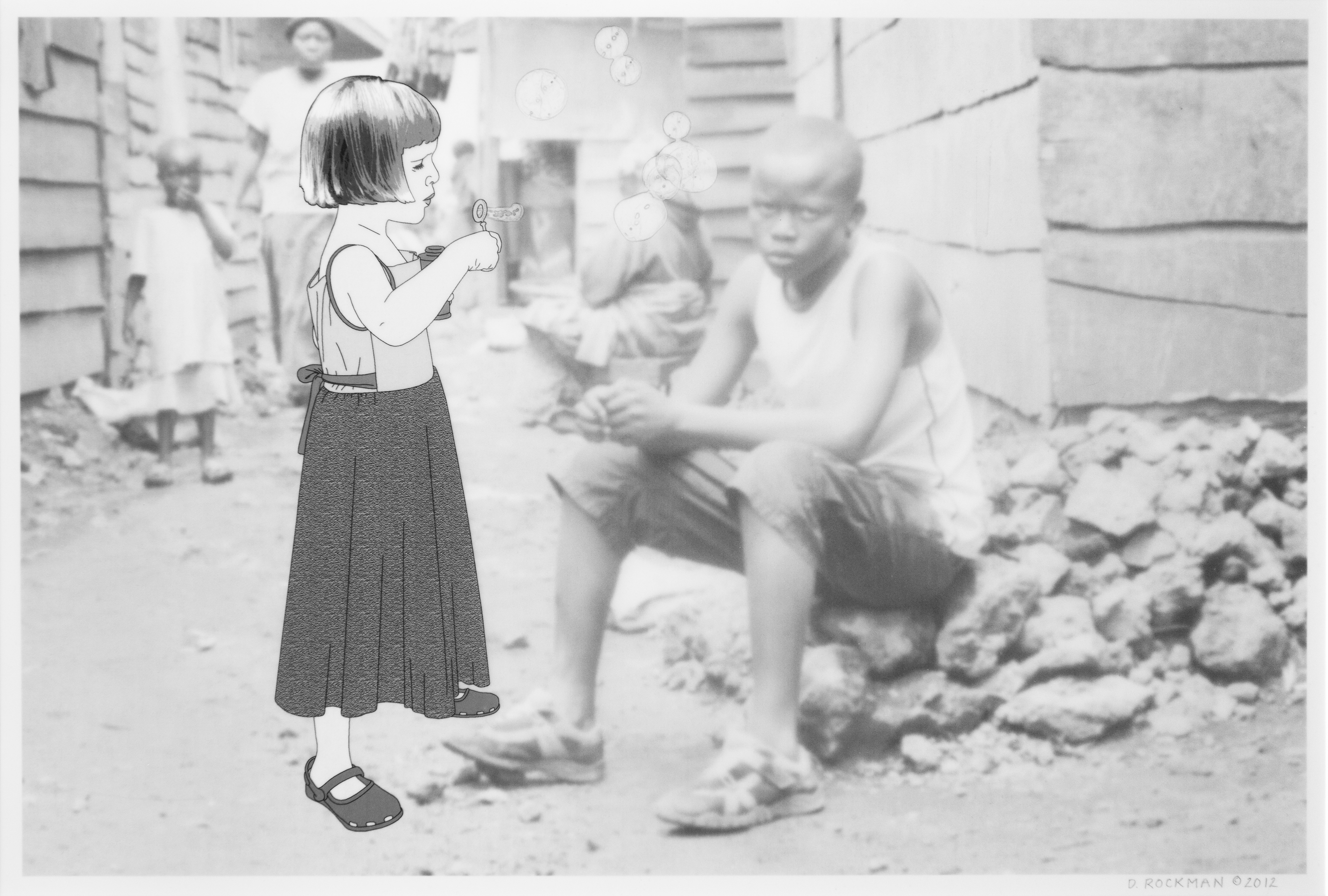 General Education Program Chair Adam Schuitema spent part of his sabbatical, taken during the spring 2015 semester, finalizing the publication of his first novel, Haymaker, which chronicles an isolated Michigan town that becomes the flashpoint for some of our most pressing contemporary ideological conflicts. Schuitema began work on the novel in 2004, and his portion of the exhibition is an intriguing visual encapsulation of the long and winding path Haymaker traveled, as novels tend to do, from conception to completion.

Though not a visual artist, Schuitema nonetheless takes viewers inside his writing process using research notes, character sketches, and revisions. He says he hopes the exhibition will help students in the Creative Writing courses he teaches at KCAD learn from his experience. “The final novel is so far removed from the messy handwritten notes; I liked the idea that students can look at the exhibition and see how ugly and messy that early writing process is, so they don’t get discouraged if their own processes gets messy.”

For the remainder of his sabbatical, Schuitema worked to finish the manuscript for his second collection of short stories, The Things We Do That Make No Sense. “Sabbatical gave me the time to focus on writing one final story that pulls the collection together,” he says. “It was sort of like my white whale.”

A map of Haymaker, the fictional Michigan town where Schuitema's novel is set

For Illustration professor Molly Corriveau, sabbatical provided an opportunity to expand her professional practice. Having previously illustrated children’s books, Corriveau pushed herself to write the accompanying stories as well, working to develop completed book concepts she’s currently pitching to publishers. “Being a visual person, the hardest part of my sabbatical was writing the stories,” she says. “I had a lot of great ideas for stories, but turning them into narratives was a real challenge.” 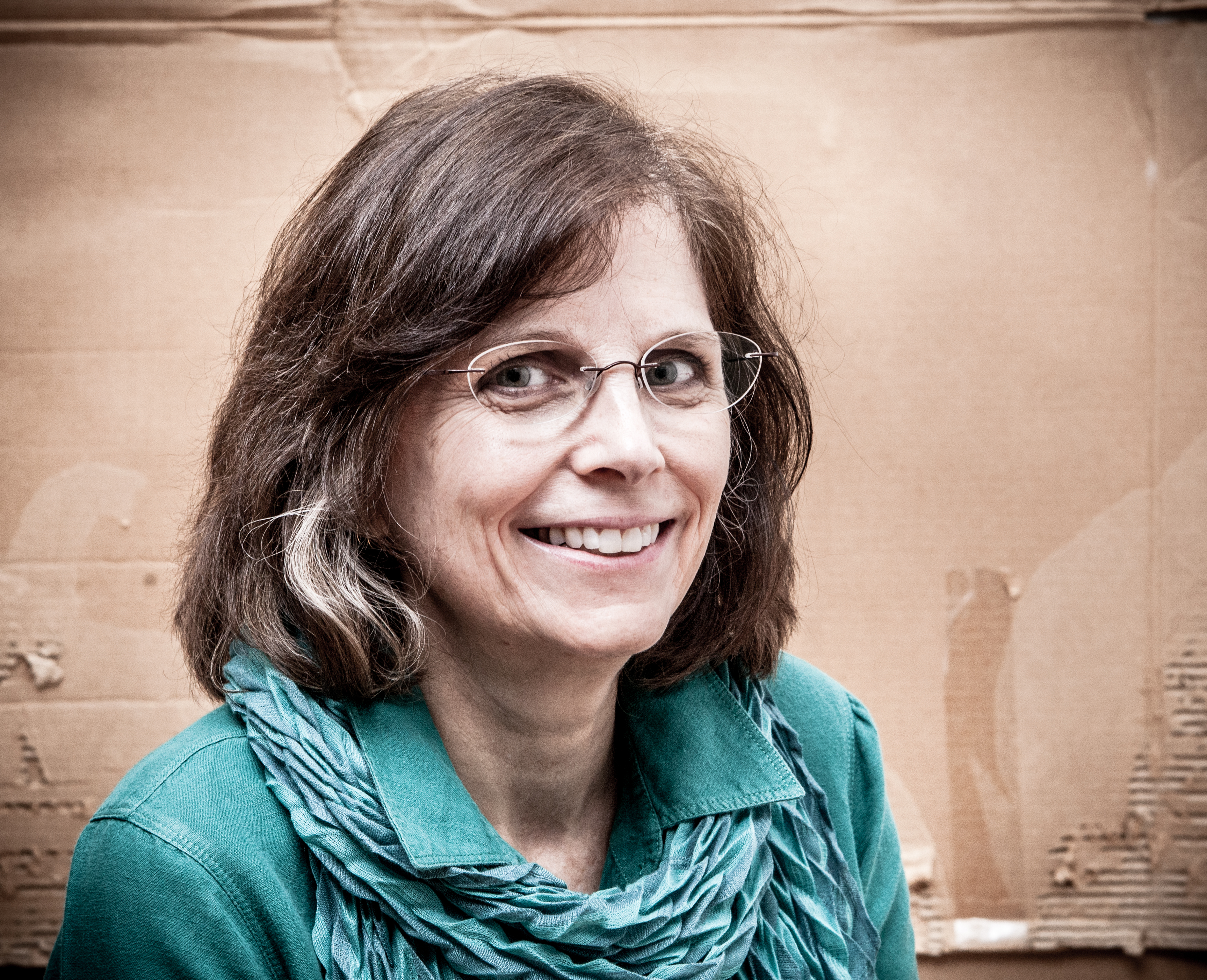 Corriveau is displaying a number of illustrations she completed for a collection of princess stories she’s developing where each story takes a decidedly different twist on a classic fairy tale. The illustrations are displayed next to snippets of her written narrative. “All of my princesses are a little bit off in some way,” she says.

Now, she plans to bring the experience back into KCAD, where she teaches a children’s book class. “For my students, the pictures are the easy part. Many of them want to write their own stories, and now I feel like I’m better equipped to help them do that.” 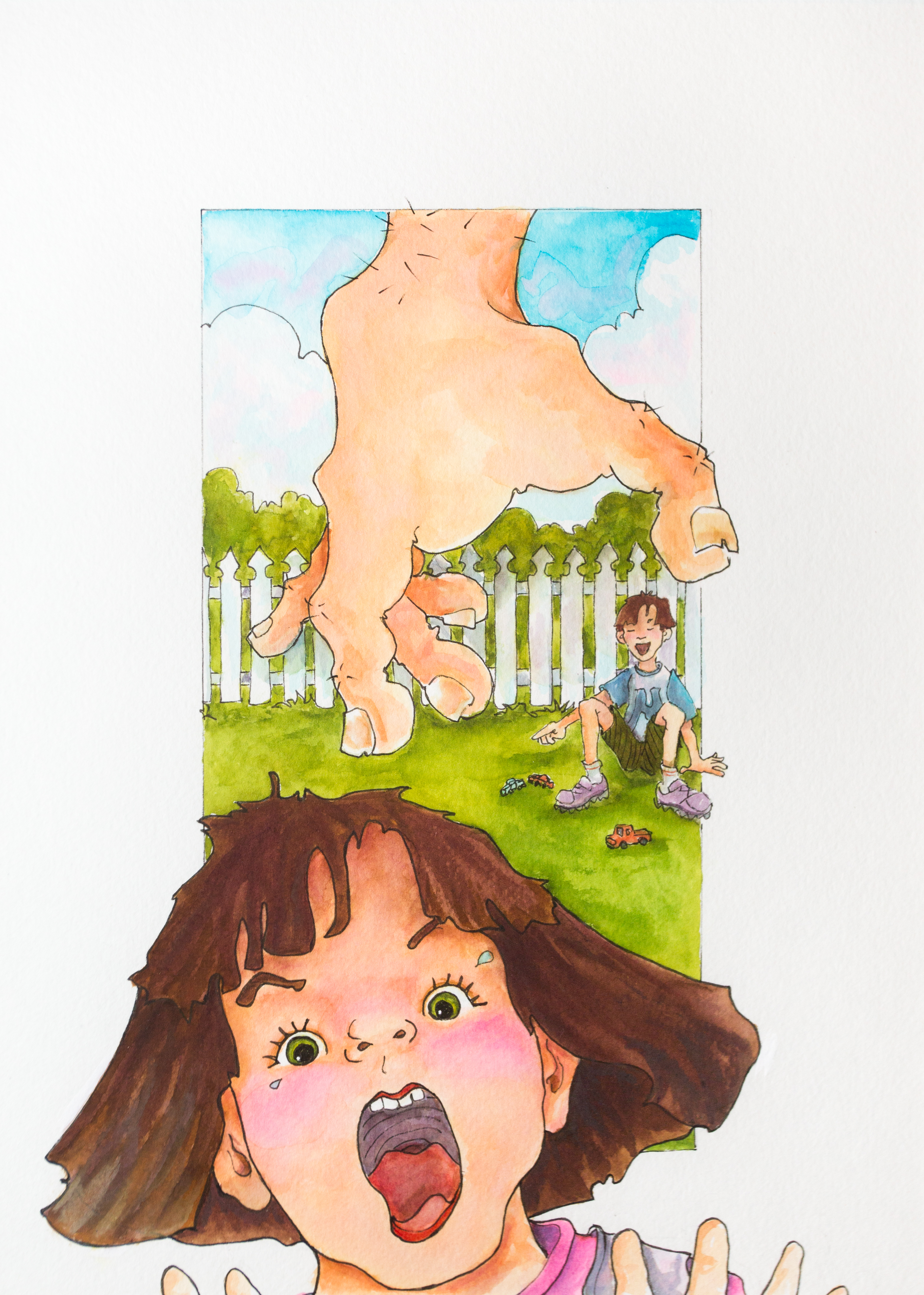 Another one of Corriveau's illustrations included in the exhibition

Illustration professor Patricia Constantine took a more geographical approach to pushing herself toward new experiences during her sabbatical, traveling to Scotland in 2013. “It was my first sabbatical, and I wanted to challenge myself,” she says. “I knew that I wanted to go someplace and do something different to really get out of my comfort zone.” 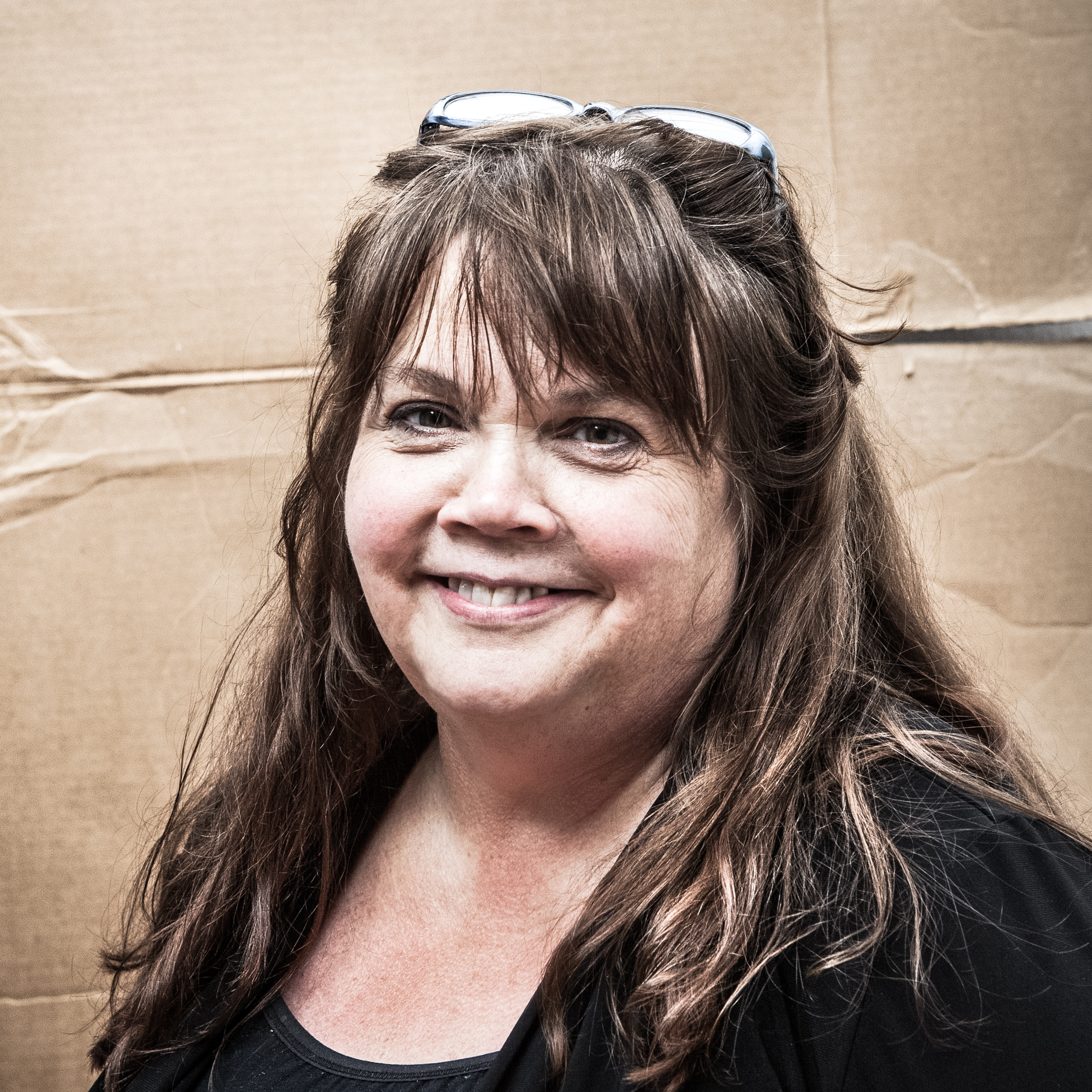 Constantine says she chose Scotland largely because of her fascination with the odd and the occult, as well as the strong element of narrative that’s present in her own work. “As an Illustration professor, narrative is huge for me, and Scotland has strong traditions of narrative, mysticism, and magic.”

During her sabbatical, Constantine networked with Scottish magicians and spent days immersed in the country’s magical history. As a result, her work in the Faculty Sabbatical Exhibition is largely inspired by illusion. Using motion-sensor triggers, Constantine created wooden mirrored boxes that remain dark until the viewer approaches. Inside the boxes are miniature masks, created using 3D scans of Constantine’s face, which evoke mythical creatures that are characterized in Scotland as gaffs, something presented as real even though it isn’t. She’s also displaying large-scale illustrations inspired by carnival sideshow posters.

Scotland left such a lasting impression on Constantine that she helped organize and lead a study abroad trip to the country for KCAD students in the spring of 2015. “My sabbatical rejuvenated me and left me feeling recharged and excited in the classroom, but more importantly, it inspired me to bring students to this very special place,” she says. “I know it really challenged them and matured them as artists.” 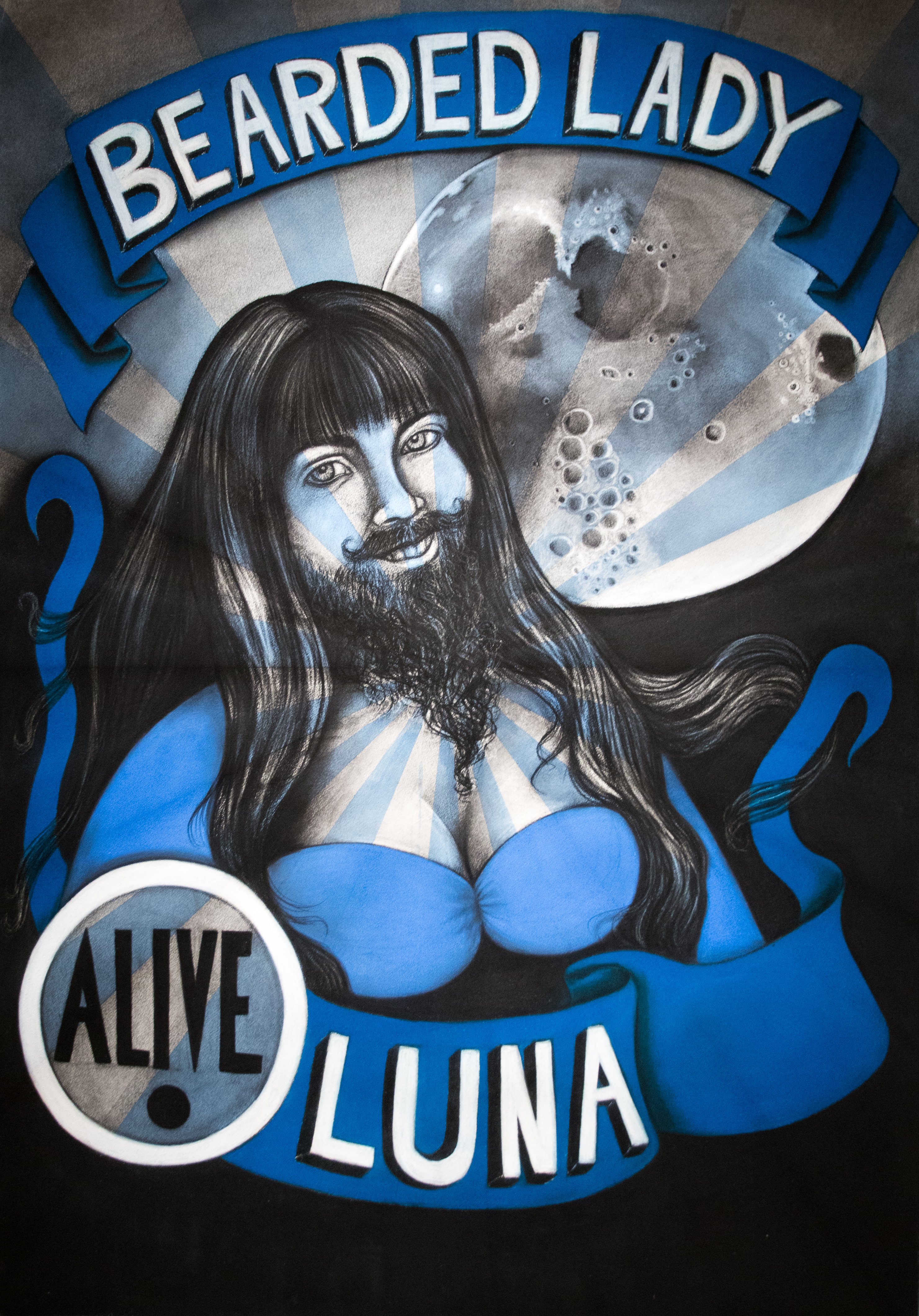 Painting professor Margaret Vega also embraced the opportunity to travel during her sabbatical in 2010, visiting Peru and New Zealand to conduct research on human interactions with the environment. She says this relationship has been a point of personal and artistic interest for her for over 20 years. 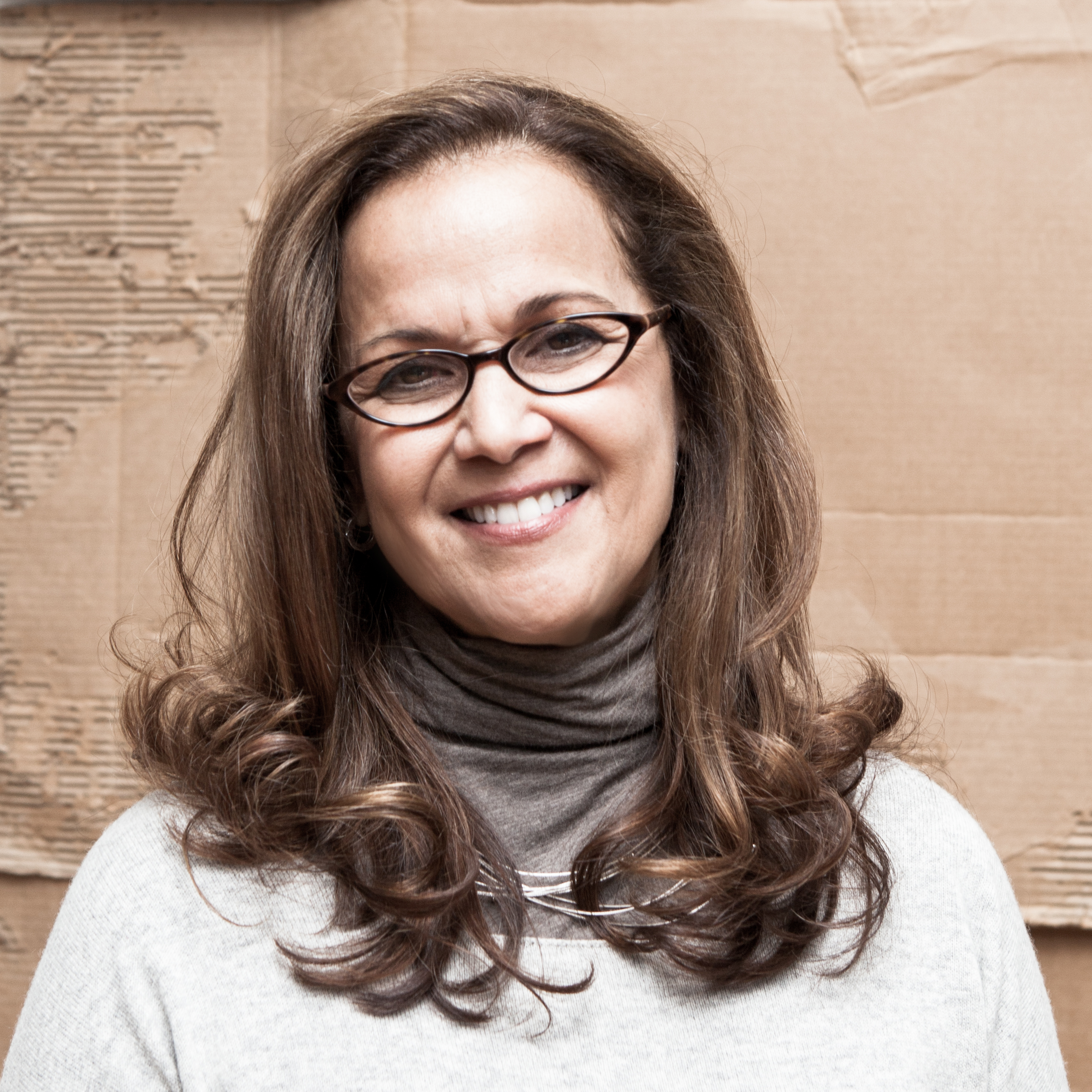 “I was reexamining the relationship between human beings and nature, and how we organize it without any regard to the harmony and the order that’s already there. It was important for me to be there and interact directly with the environment and the people.”

Some of the work Vega is displaying in the Faculty Sabbatical Exhibition draws its imagery from her observations of the tidal pools that are woven into the daily schedules of people in New Zealand. “This relationship became a part of me while I was hiking across tidal areas,” she says.

Vega's work in the exhibition

Vega took plenty of risks on her sabbatical, not the least of which was venturing into the remote wilderness of the Peru’s Amazon basin, mountains, and sacred valleys to interact with indigenous people, observing how they sought to live in harmony with the natural world rather than trying to harness it. Other works she’s included in the exhibition reflect the necessity of such risks in life and in the artistic process. “Being in all those different parts of the world caused me to examine the fabric of who I am, and how I became that way, and I had to take risks to do that,” she says.

"Dialogue of a Dream" by Margaret Vega

In the classroom, Vega says she continues to try to instill that that experience of discovery in her students. “I brought that sense of risk to my students, encouraging them to try things in a way that they haven’t before, or examine things from a different perspective.”

There will be a closing reception for the Faculty Sabbatical Exhibition on Wednesday, September 2 from 5-7pm that is free and open to the public.