As an artist who works in a variety of media including photography, drawing, and painting, Leslie Bellavance has been a creative problem solver for much of her life. As the new President of Kendall College of Art and Design of Ferris State University (KCAD) and Vice President of Ferris State University, her medium is leadership, and her studio is the entire campus community. 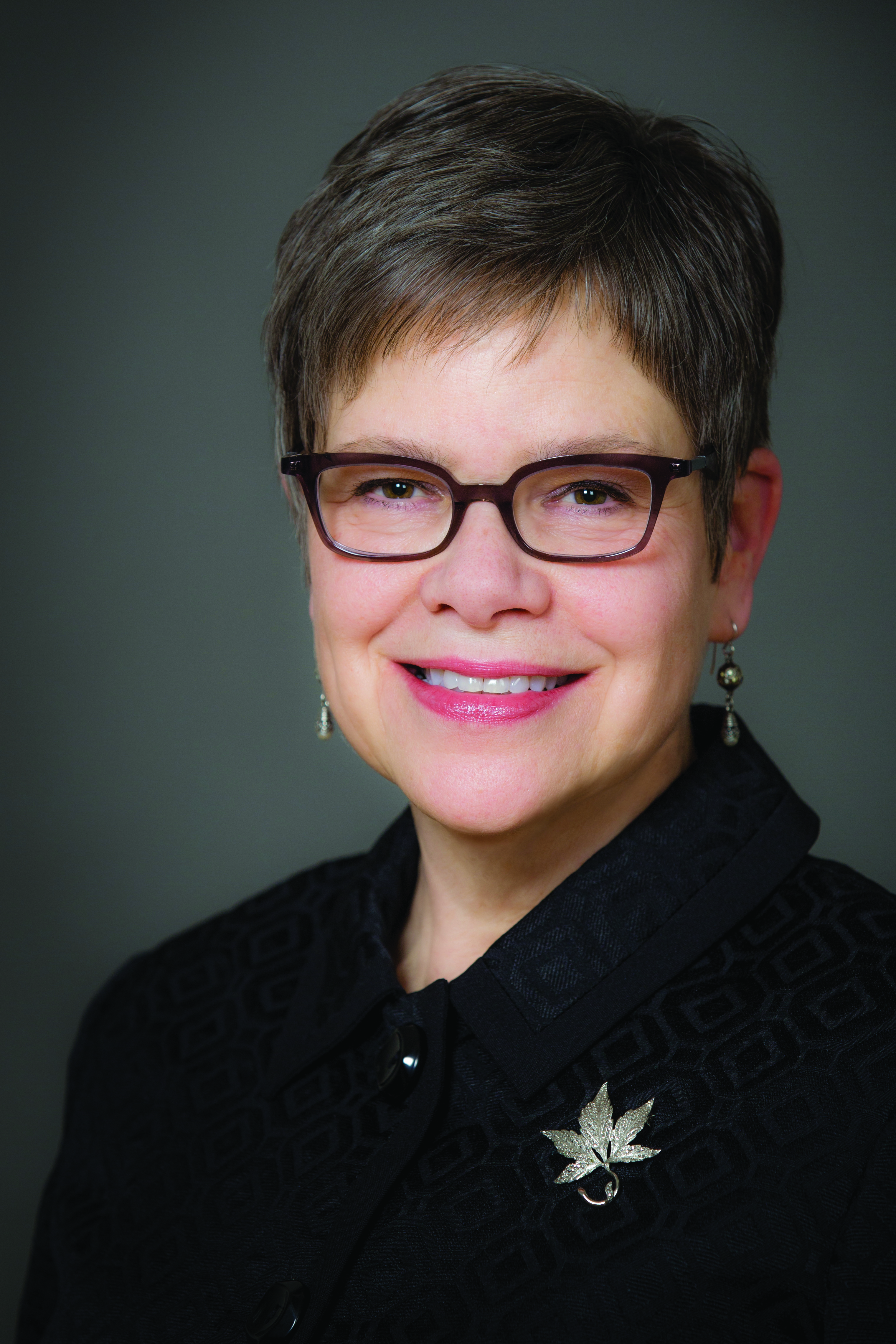 Bellavance began her career with a BFA from Tyler School of Art at Temple University in Philadelphia and an MFA from the University of Chicago. She has exhibited her artwork in the United States, Europe, and Asia and received numerous grants and awards including a National Endowment for the Arts Fellowship and a Wisconsin Arts Board Fellowship. She has also written and lectured on contemporary art, is the author of analemmic , an experimental artist’s book published by Nexus Press, and has built a career around 35 years of teaching and administration.

“When I decided to go into administration and leadership,” she says, “I realized that many of the things one encounters every day in a position like this take the same kind of courage that it does to work in a studio. Art and design students are encouraged to take risks with their work in order to break through to the next idea or the next level of accomplishment. As art and design practitioners, we are trained to live and thrive in this ambiguous moment, to take up the challenge, and embrace change. I believe this process is similar to an ongoing engagement in developing the dynamic and creative community of an art and design school.” 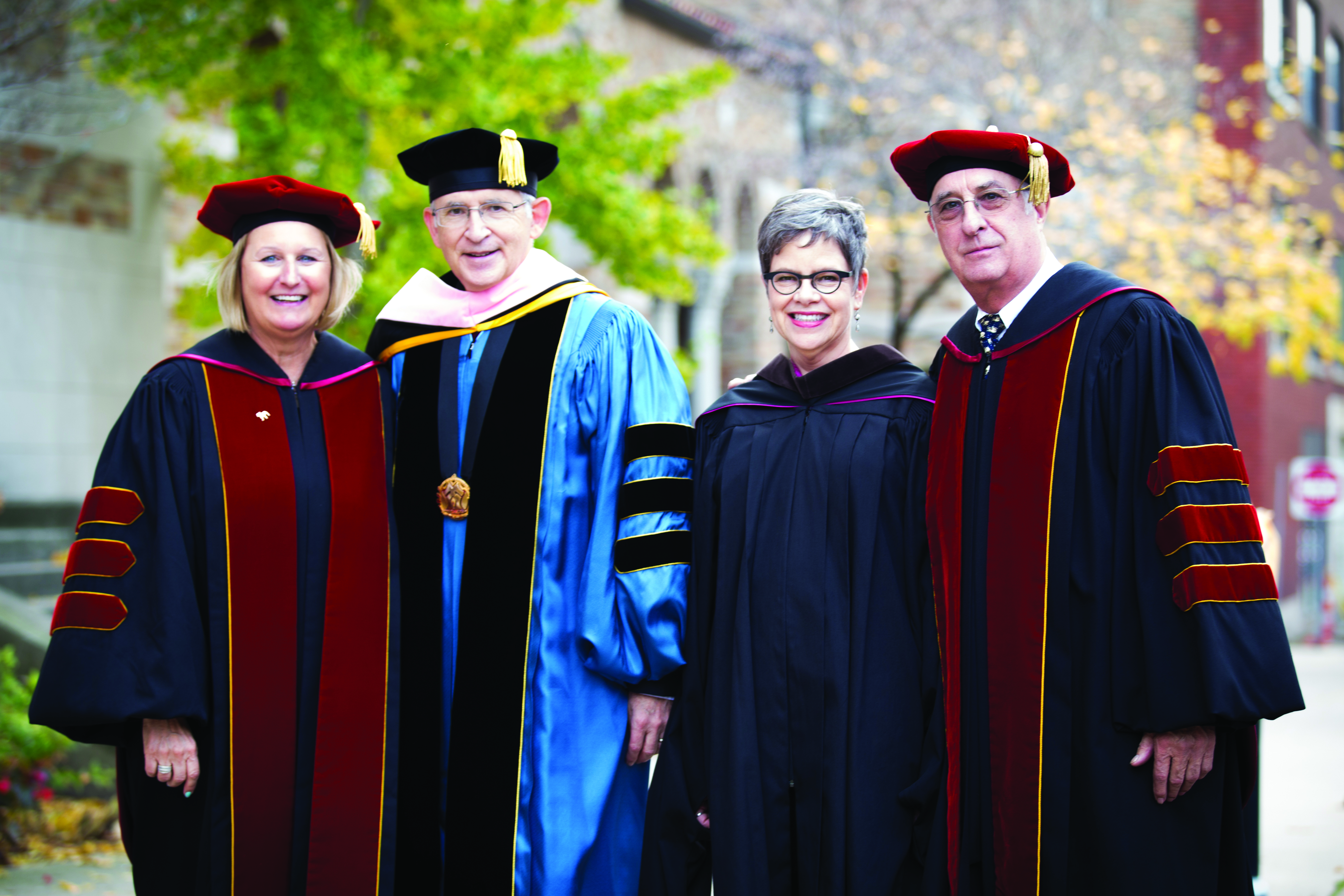 Bellavance’s interest in community has grown steadily throughout her career, from her first position teaching photography at the University of Wisconsin in Milwaukee to her role as Dean of The School of Art and Design at Alfred University to her appointment as the President of KCAD.

While in Milwaukee, Bellavance was engaged in outreach on the boards of community arts organizations, steering one board toward developing an after- school program that would strengthen its ties to the neighborhood and another board toward creating bilingual publications that would connect it with the surrounding Latino community. “I understand now how that was very similar to the kind of things I might be doing as an administrator in terms of leadership, concept development, and understanding how organizations fit with their communities,” she says.

According to Cindy Todd, Art Education Program Chair at KCAD, the affiliation with NASAD and strategic planning experience were two of the factors that impressed the hiring committee as they sought a new president. “Leslie has an expertise with accreditation that will serve KCAD very well,” she says. “I expect that she will make a remarkable president who will strengthen us as a college and a community.” 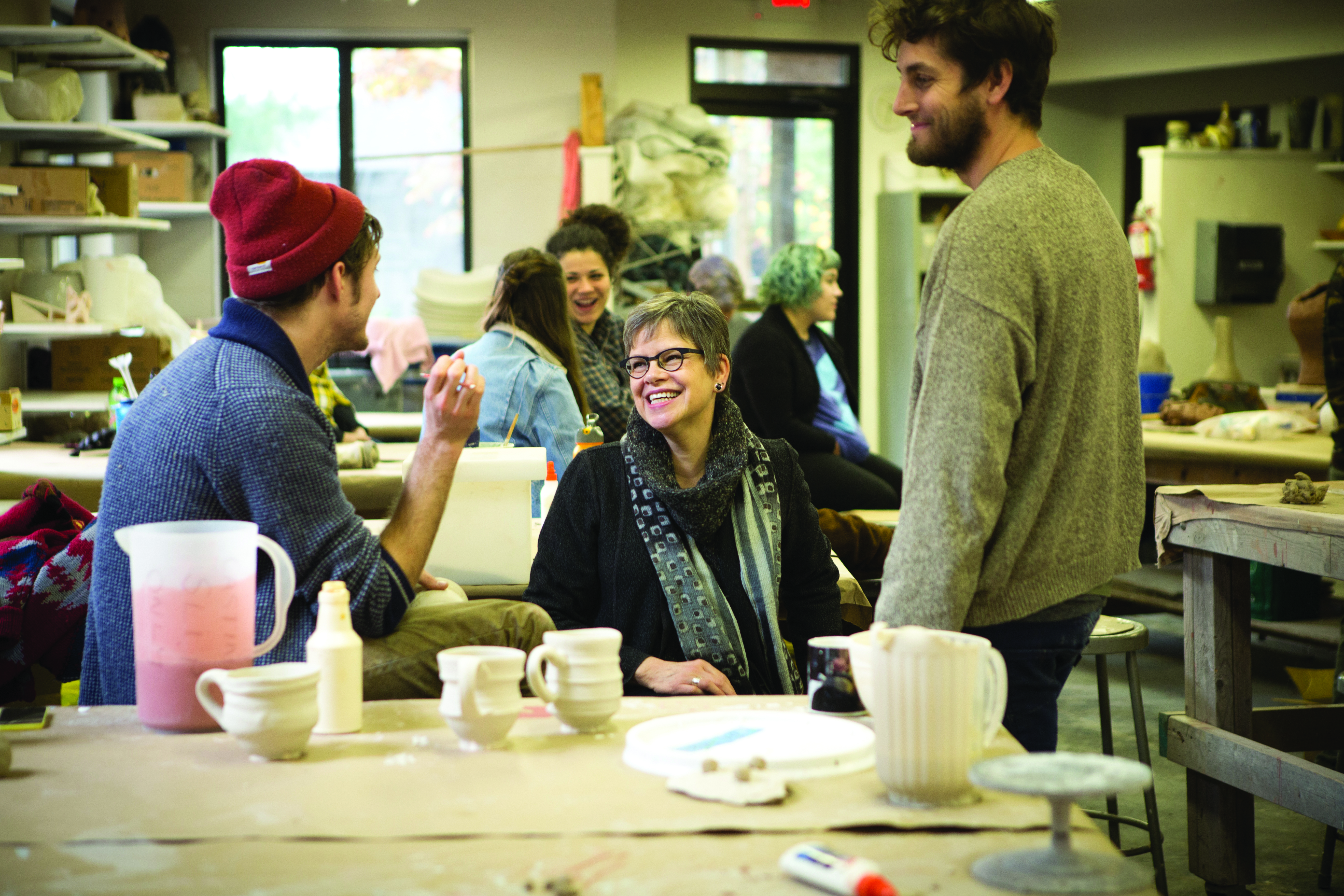 While Bellavance is new to the Grand Rapids community, she’s not new to the Midwest. “I taught at Ox-Bow [School of Art] for two years in the ’80s, so I’ve traveled around this region a little bit. I see incredible new developments. I am impressed with the connection of KCAD to its city. It’s place-based, with a focus on design as well as studio art, and when I spoke to the faculty, students, and staff, there’s a real passion for how they engage as members of the community.”

Among her first priorities is getting to know every inch of the resources at KCAD. “I’m exploring the campus and the city more deeply, and also the Ferris campus,” she says. “I’m very interested in putting together the physical plant with the programs in it. In art and design, the space that you’re in is key to how you do your work. I think KCAD is a dynamic environment because there are a lot of elements in motion.” 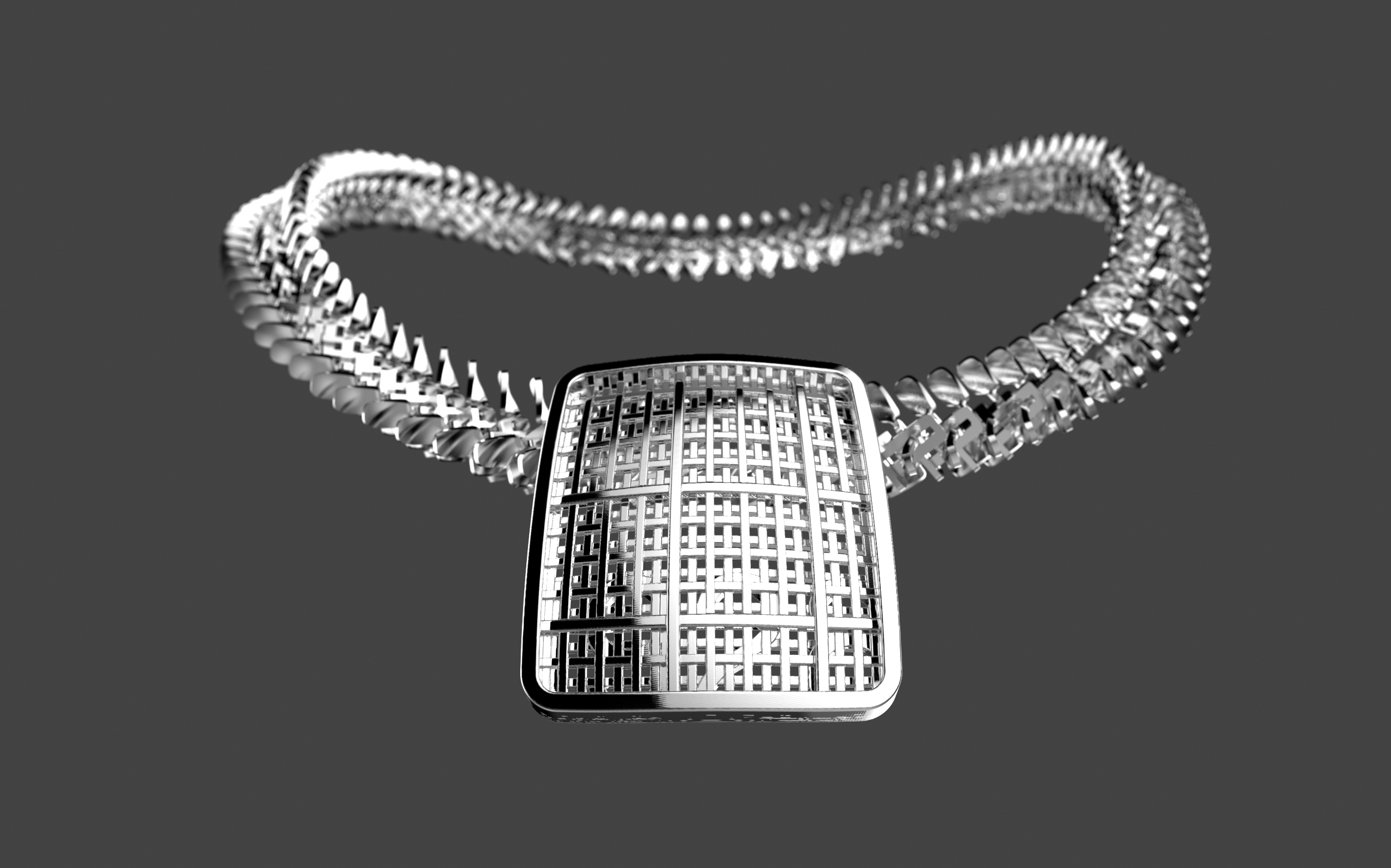 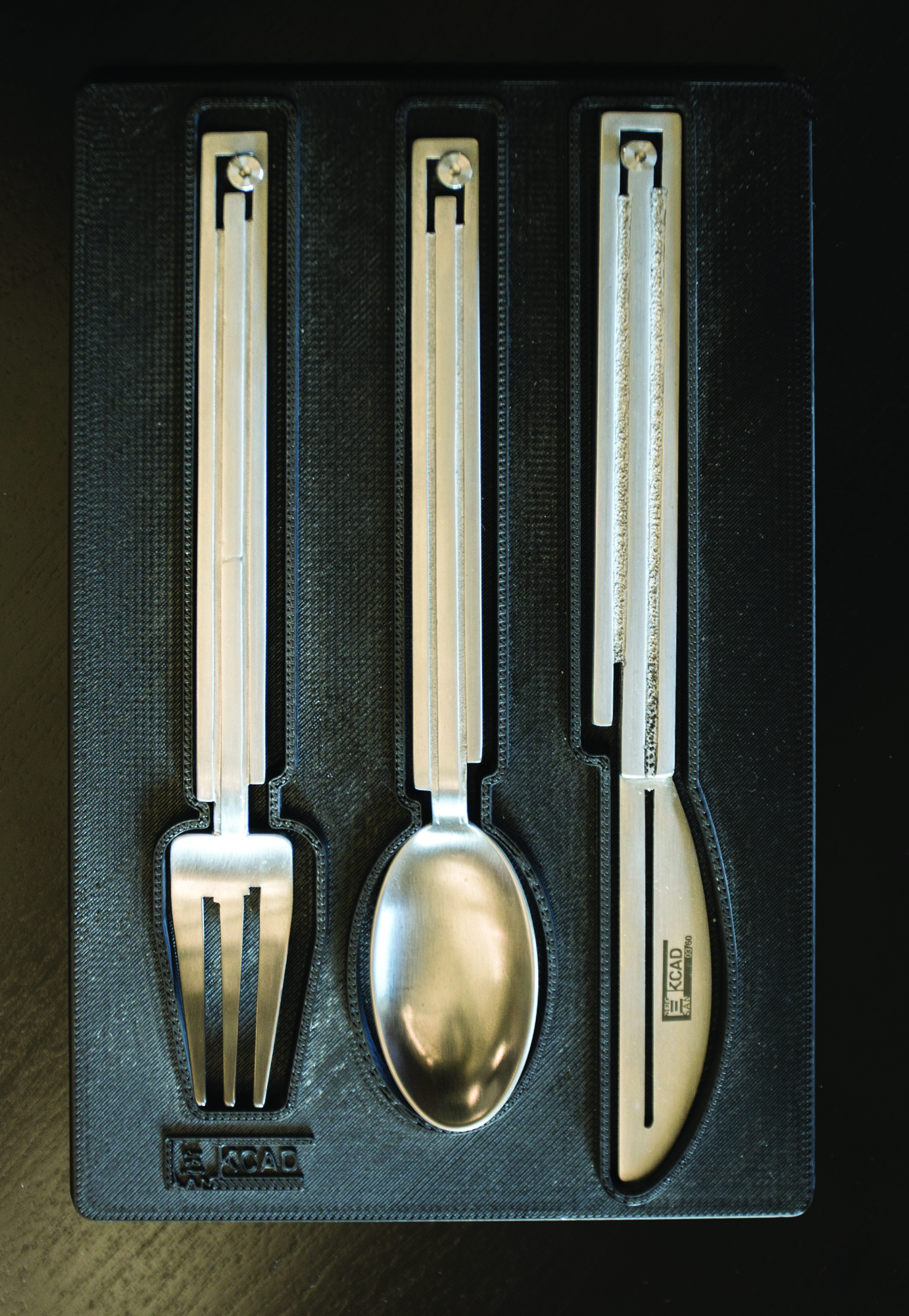 Bellavance says she’s also excited to meet both internal and external constituents of KCAD. “We’re going to be working toward a strategic plan to make sure our future planning and strategy focus on the community relationships KCAD has built. Of course, our internal connections are very important too. Each part connects with the other.”

Meanwhile, Bellavance has been getting to know the student body during the first semester of the 2015-2016 academic year. “I’m really happy that I could be here for the senior shows last spring because that confirmed my sense of what a strong curriculum we have. It’s very student-centered, and I could see that in the work the students did,” she says. “I want to take every opportunity I can to interact with students and maintain a good communication flow. My focus is going to be on those aspects of leading the institution that makes things possible for them.” 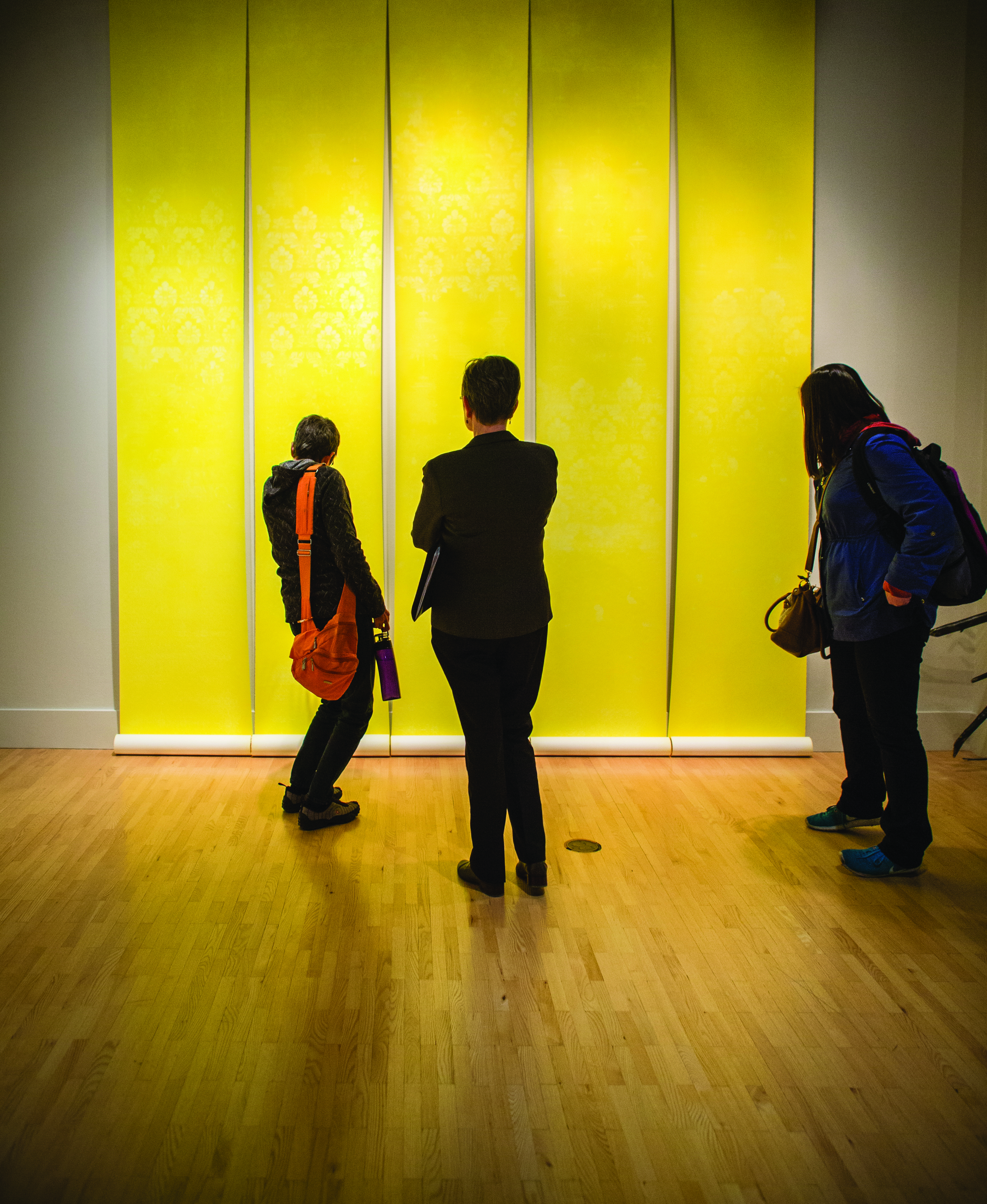 Bellavance and guests examine "Viscious Influence" during the opening of "Undone," a retrospective exhibition of Bellavance's artwork in The Fed Galleries @ KCAD

On November 5, to celebrate all things KCAD and officially welcome Bellavance, the college held a series of Inaugural Celebration events. A ribbon-cutting unveiling the new Master of Architecture, Illustration, and Medical Illustration spaces on the third floor of the 17 Fountain St. NW building was followed by a student ice cream social, where Bellavance had the opportunity to visit with some of the students who make the KCAD student body such a diverse and remarkable community. At the afternoon installation ceremony at Fountain Street Church, Bellavance was officially installed as the thirteenth President of KCAD.

As Bellavance prepares to lead a new generation of artists and designers at KCAD, the possibilities for growth and change are immense.