The mantra of ‘if you’re not growing, you’re dying’ has long governed organizations’ ideas of success. But what does that old adage really mean in the 21st century?

These days, it’s not necessarily getting bigger that helps companies elevate their impact, but getting broader. Challenges both large and small – from conducting productive meetings to adapting business models to an evolving world – are becoming increasingly complex, and an influx of money or manpower doesn’t always lead to effective solutions. Creativity, on the other hand, does. But when it comes to figuring out how to leverage existing potential, many organizations are still in the dark.

Here in West Michigan, KCAD’s Continuing Studies program is taking a lead role in helping businesses and non-profits understand how design thinking and human centered design principles can empower them with new ways of thinking, seeing, and working with others. 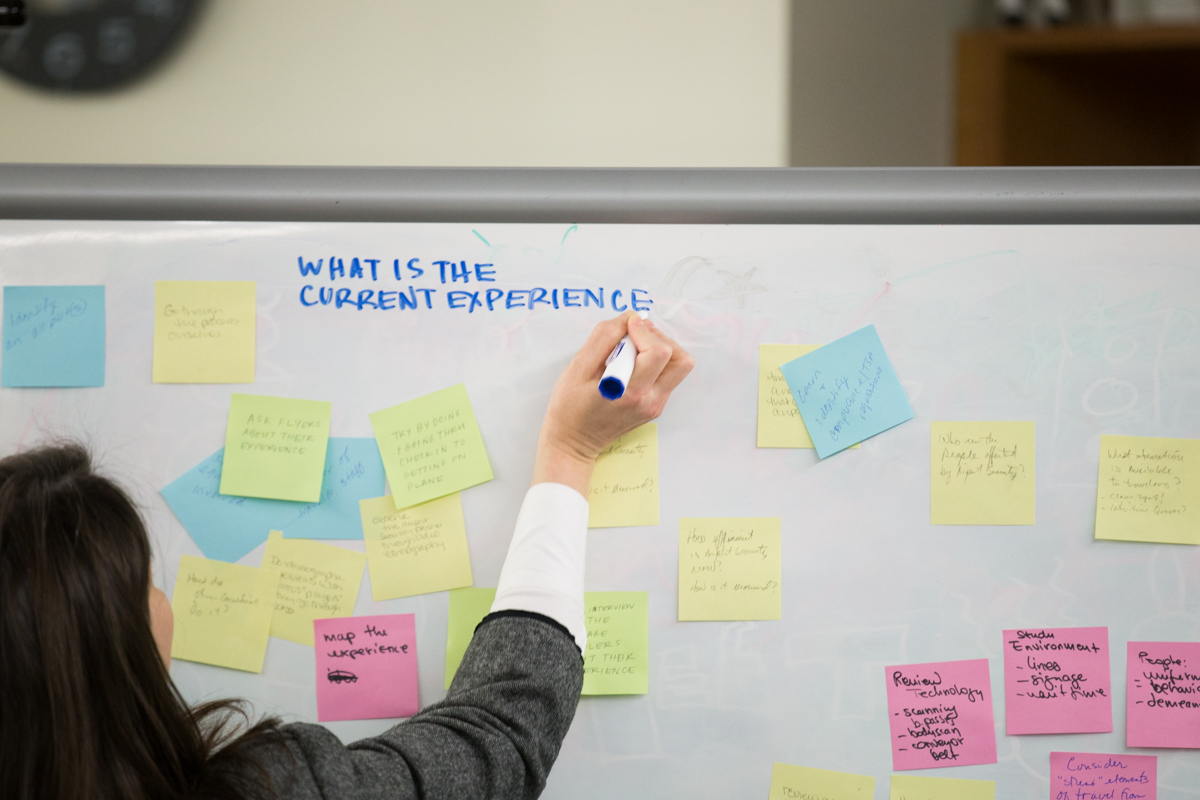 It all started in December of 2014, when high-end print provider Imperial Graphics reached out to Continuing Studies Director Brenda Sipe for help coalescing the various graphics designers it employed into a strong in-house design team. Sipe arranged for KCAD Graphic Design professor John Koziatek to help Imperial’s design team develop a common language, both visual and conceptual, that would enable them to work effectively as a team. Through focused discussion activities and exercises, Koziatek helped the team break down the self-imposed barriers that were holding them back.

“It was really a communication problem,” said Erica Manning, Head of Design and Translation Services at Imperial. “John was able to engage everyone in a way that helped them feel comfortable about voicing their opinions and exchanging ideas, and that ultimately led to the collaborative environment we were looking for. He even gave the team a series of exercises that they still use today to keep strengthening their work. It’s had a profound impact on the way they think and work.”

Continuing Studies now includes a number of workplace training options in its permanent offerings. But Sipe still felt the program could do more.

“We see our mission as very far reaching, and really there’s no limit to the number of different organizations and individuals we can connect with,” she said. “We want to be a conduit for creative discovery, engagement, and exploration wherever we can.”

This past February, Continuing Studies launched Integrating for Impact, an intensive design thinking workshop aimed at giving working professionals from both business and social sectors the ability to creatively solve problems from a human-centered perspective. Developed in partnership with Christine Albertini of Partners Worldwide and Georgia Everse of Bravo Echo, eight organizations took part in the workshop’s first run, and the executives who attended are already putting the skills and process they’ve learned into practice.

Jenie Altruda, Vice President for Communications and Engagement at Interlochen Center for the Arts, was hired a year ago to be a change agent. She says she’s had an interest in design thinking for some time but had never had the opportunity to practice it firsthand until she and Interlochen Director Leslie Donaldson attended Integrating for Impact.

“I’ve worked in a corporate setting for over 20 years now, and there’s always such a focus on getting things done and checking boxes that you miss a lot of opportunities to really get to the root of a problem and solve it in a way that’s sustainable,” she said. “[Design thinking] results in much better decision making, because the process allows for experimentation. You have the opportunity to make mistakes and learn from them in ways that really benefit your end product.” 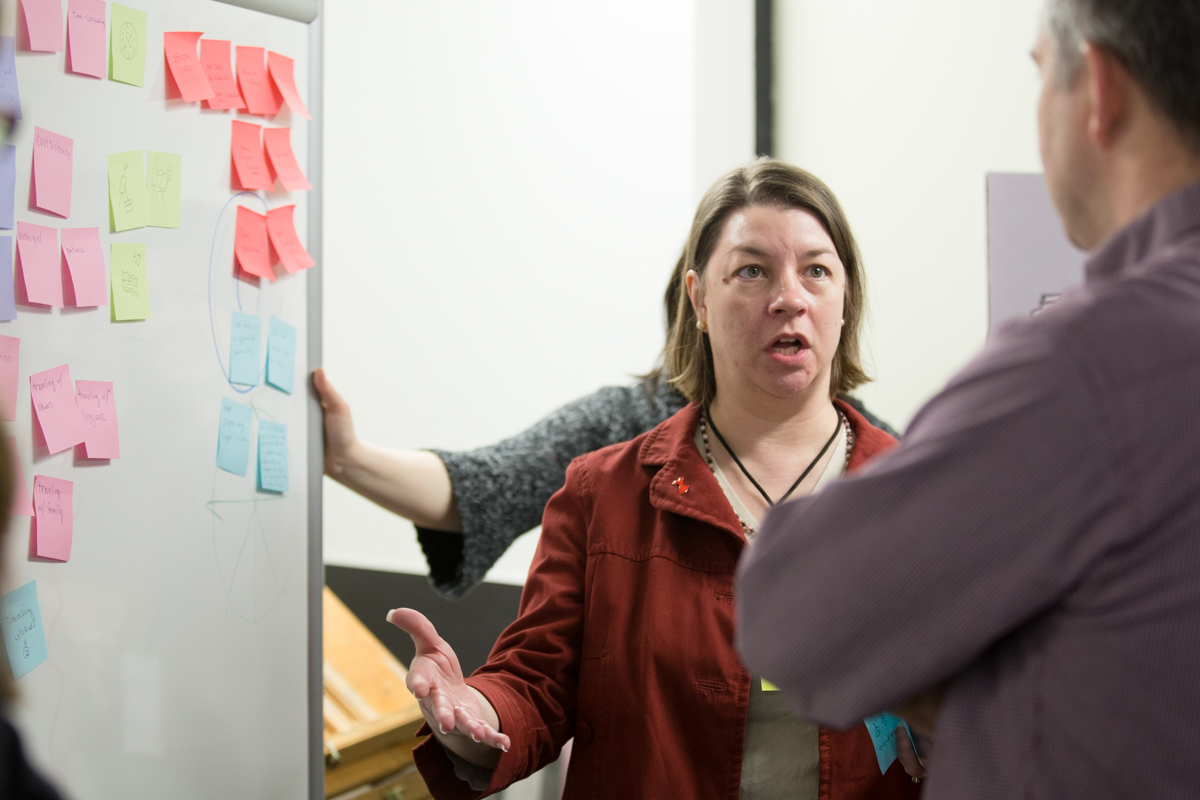 Eight West Michigan-based organizations took part in the first run of Integrating for Impact; the fall 2015 session will being on October 15

“These design thinking concepts have been floating around the non-profit service sector of the community for about a year now, but [Integrating for Impact] gave us the opportunity to do some really hands-on practice,” she said. “Sometimes when you’re really immersed in an organization, it can be hard to step outside and think differently.”

“There are times, for example, when you go to a meeting where you’re trying to solve problem and you sort of keep talking around the problem and it gets frustrating quickly,” she said. “This model gives us tools to push the conversation forward because we can step outside our usual thinking and look at the problem through multiple lenses, and that forces us to do something very tangible with our meeting time.” 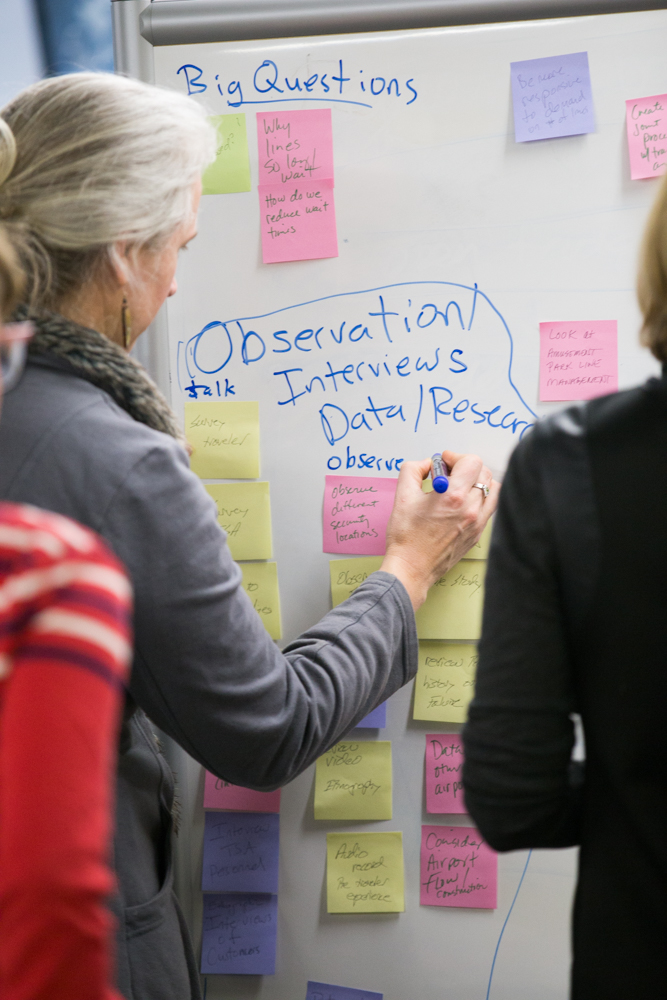 (above and below): Many of the participants were aware of the design thinking process already, but Integrating for Impact presented them their first opportunity to go through the process firsthand 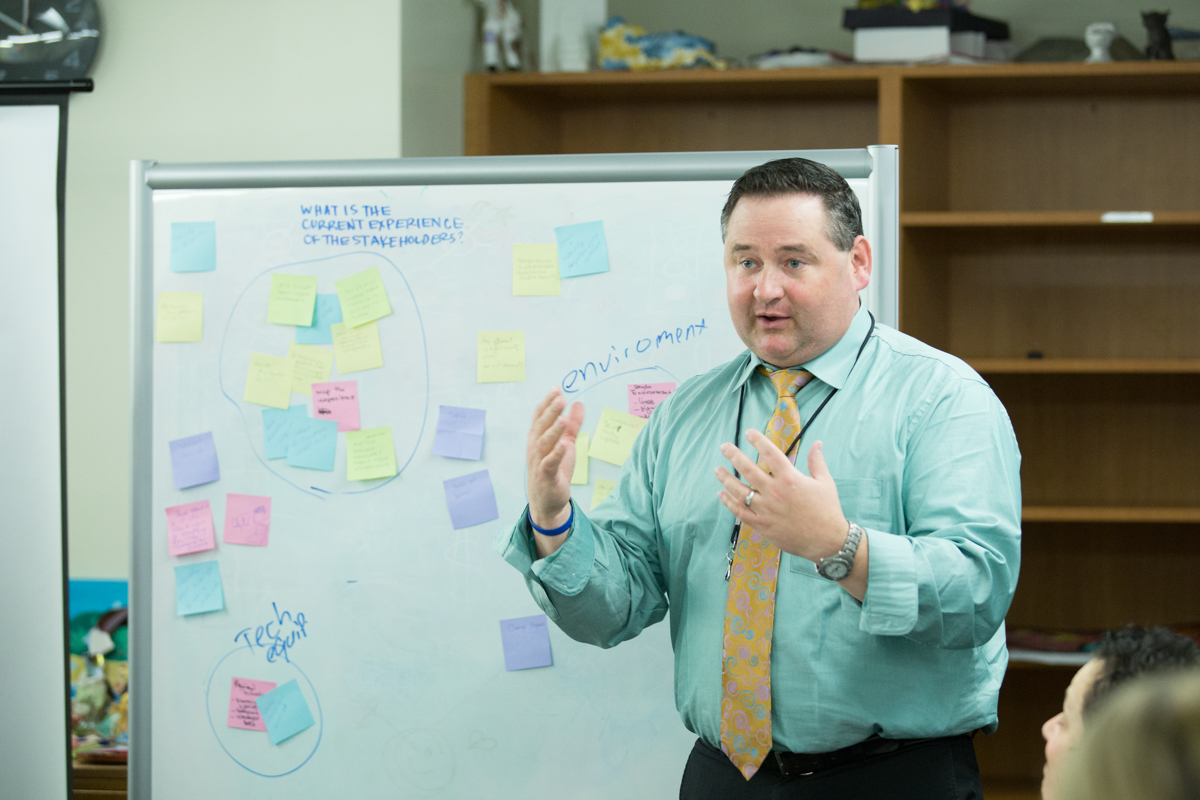 The tools and processes taught in Integrating for Impact can even help organizations with their long-term strategic planning. At Interlochen, Altruda and Donaldson brought back with them a more holistic perspective that’s now driving major shifts in the organization’s marketing and IT strategies. Interlochen is currently moving away from self-promotion in its marketing efforts, focusing instead on encapsulating and communicating the student experience, and is re-thinking its online interfaces from a user experience perspective.

“The way that we’ve built some of our systems is not in line with the way people want to think about and receive information,” said Altruda. “Instead of solving one very specific user experience problem, we’re trying to get the IT team, as well as the organization at-large, to think much more broadly about how we utilize technology to engage audiences.”

Similarly, the Kent District Library (KDL) sent six people to the workshop to better understand the needs of the approximately 148,000 households it serves. By the end of the session, KDL Executive Director Lance Werner and his colleagues were able to develop a process strategy that they then brought into KDL’s Rockford (Krause Memorial) branch. Due in large part to the branch’s small and outdated building, the needs of the local community have surpassed KDL’s ability to provide requested services.

Rather than implement a top-down solution from the executive level, KDL trained the branch’s staff to connect directly with patrons so that they could get a sense of exactly what the local community needed and wanted in a library. Patrons had a chance to weigh in on services, delivery methods, and even the physical layout of the branch. The results in Rockford have shown KDL the potential of human-centered design to enhance its service model across the board.

“I was shocked by what I didn’t know,” said Werner. “There’s this notion that as a leader, you start with ideas that come from hypothesis, but that’s wrong; what’s right is to start with the people you’re serving. It’s a disservice to everyone for leaders to make a decision off only their own perception, especially when you’re talking about a publicly-funded organization like KDL.” 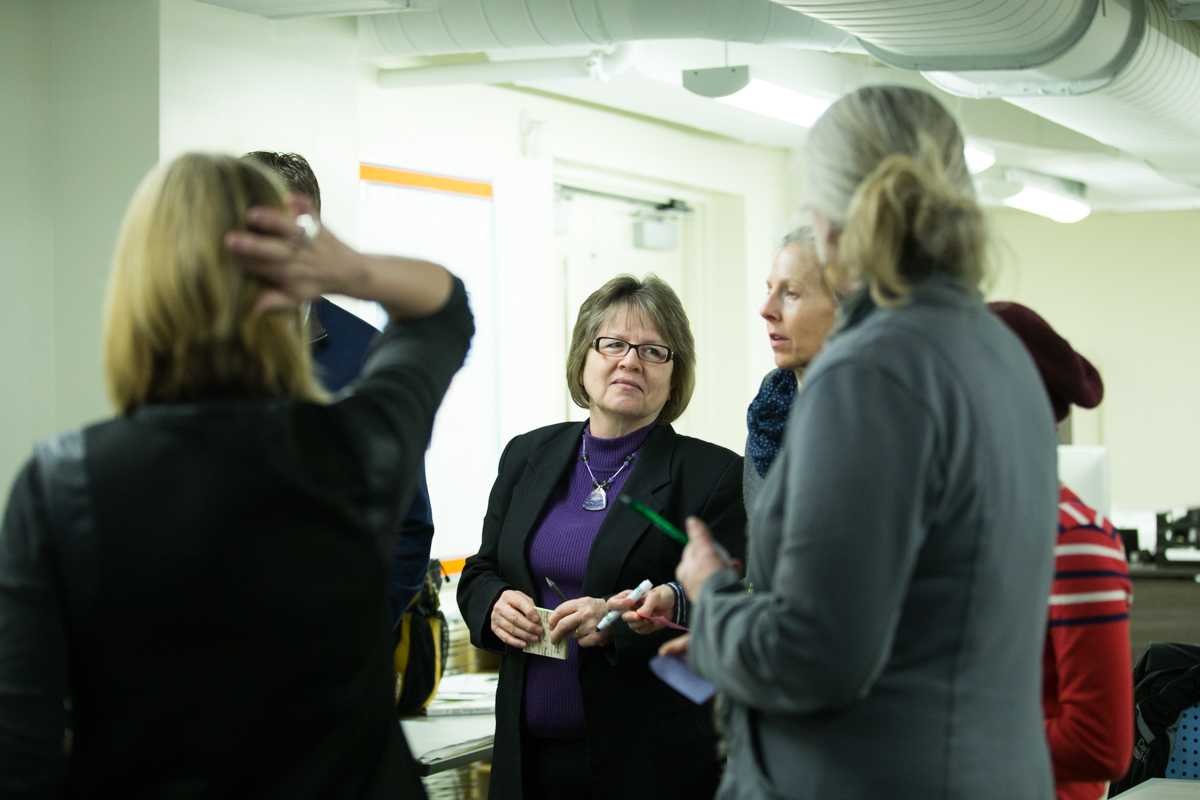 (above and below): Integrating for Impact helped participants frame problems and challenges in new ways, enabling them to see solutions they would not have previously considered 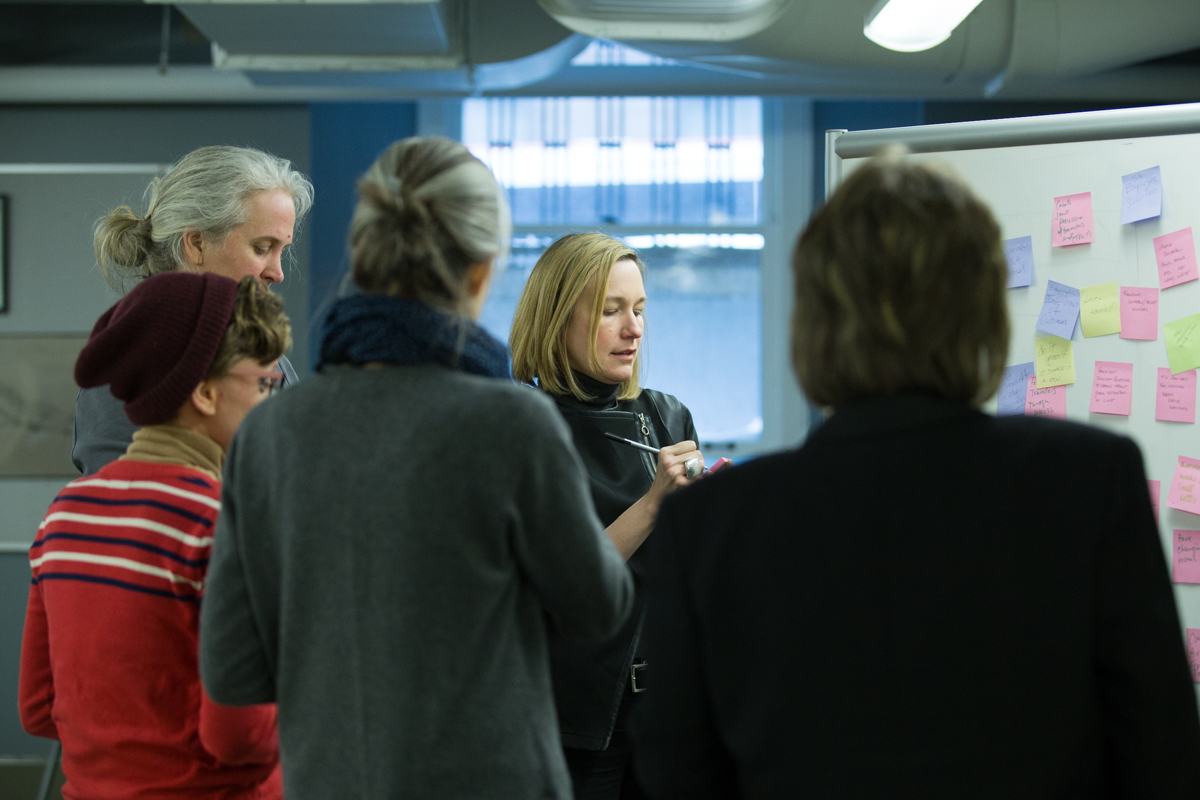 Integrating for Impact proved equally useful for organizations with an even broader client base, like Partners Worldwide, a global Christian network that works with businesses throughout the world to create economic prosperity. Director of Strategic Initiatives Roxanne de Graaf entered the workshop as her organization was expanding its reach and impact by employing new strategies to address poverty.

“We recognized in our global dialogue that poverty wasn’t going to end with only business training and mentoring; we had to use our network to influence systems and to advocate more intentionally,” said de Graaf.

As de Graaf began employing the ethnographic interview and listening exercises she was learning to try to get a better sense of what kinds of barriers to progress her clients were facing beyond training and capital, she had an epiphany: why not teach these same design thinking tools and strategies directly to the clients themselves?

“We used the same matrices I used in Integrating for Impact to identify key themes and principles from our research, and then developed a prototype of an advocacy guide that can help our clients use design thinking tools to identity their own barriers to progress and formulate their own solutions,” said de Graaf. “We’ve presented it to the rest of the organization and the reaction was very positive. The next step is to go test it out, which we’ll do over the next year.” 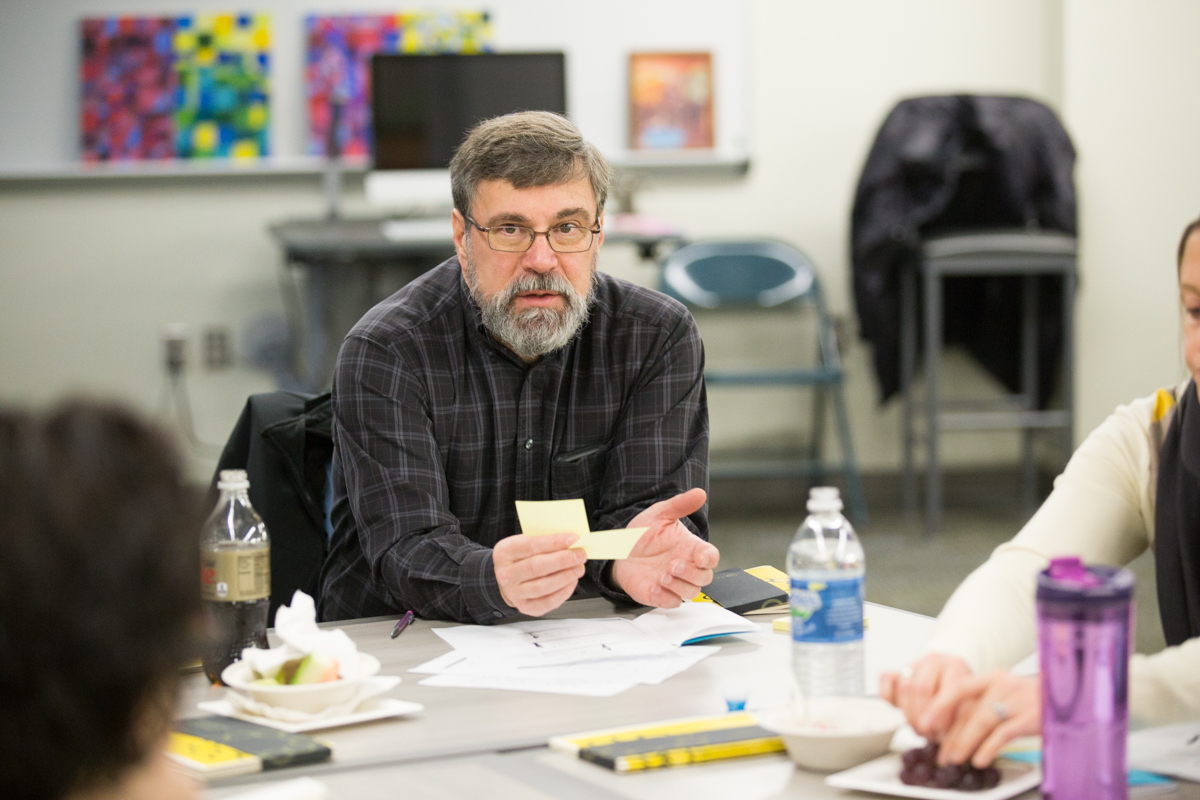 (above and below): Workshop participants are already brining the skills they've learned back into their organizations in a tangible way 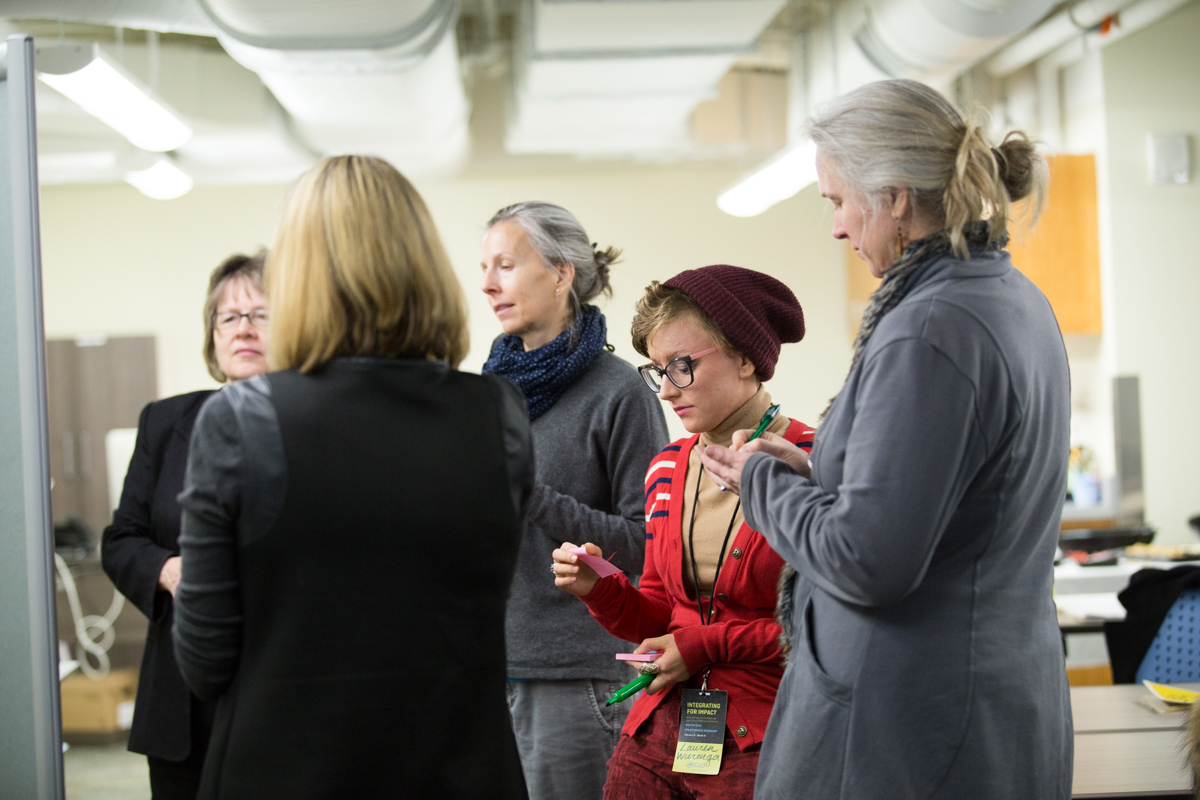 There are some misconceptions surrounding design thinking, namely that you have to be artistically creative to engage in it. There’s also the idea that human-centered design is only relevant to product design. Osburn found the truth to be just the opposite.

“It’s not just about design in the aesthetic sense; it’s also about designing your business model and using human-centered design to ensure that your constituents are getting the maximum value from the services you’re providing,” she said.

Going forward, Osburn says she believes that human-centered design has a place in the Johnson Center’s mission, starting with helping KCAD Continuing Studies to refine Integrating for Impact in preparation for the second session of the workshop, which will launch this fall.

“We see the workshop as something fluid,” said Sipe. “We want to be able to continually evolve our content and our delivery systems to meet the changing needs of professionals in all disciplines, and we’re going to use the exact same processes we’re teaching to do just that. We learned a great deal from the individuals who participated in this first session; it was a very symbiotic exchange.”