The Grand Rapids, Michigan-based Kendall College of Art and Design (KCAD) Fashion Studies program has announced the official naming of the program as the Pamella Roland DeVos School of Fashion. The program is named for Pamella Roland DeVos, a Grand Rapids native and president and designer of pamella roland, a renowned international fashion company headquartered in New York City. The naming is in honor of a $1 million gift the Dan and Pamella DeVos Foundation has made to KCAD’s Fashion Studies program, a donation that will help the new program grow and raise its profile around the country and within the industry.

“I’m honored that I can share my passion for fashion design by investing in the next generation of designers,” says Pamella Roland DeVos. “This Kendall program was created to fill a need and demand within the Greater Grand Rapids area for fashion education and to help catalyze the industry locally. Supporting the program will increase its visibility and impact in the fashion industry, not only locally, but in the key design centers of New York, Milan and beyond. Ultimately, we’re working together to make a difference for students, for West Michigan, and for fashion around the world.” 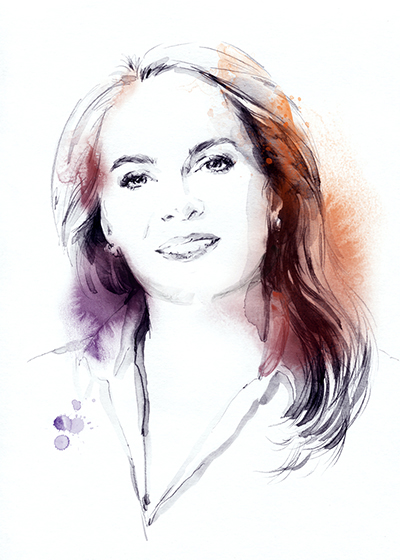 The DeVos’ gift will support such projects as an annual fashion show, a speaker series, equipment purchases and upgrades, and the creation of collaborative projects with designers and retailers in the region, including a fashion atelier for young designers to produce small runs of their designs.

KCAD President David Rosen believes that the donation will also have an immense impact on growing the program’s quality, reputation, and influence.

“The financial commitment is going to create invaluable real-world experiences for our students and drive economic growth throughout our region and the fashion industry at large,” he said. “Pamella Roland DeVos’ name is a powerful brand in the world of fashion, and it is an honor for the school of fashion to bear it. pamella roland is a label esteemed by retailers and worn by A-list celebrities such as Angelina Jolie, Jennifer Hudson and Carrie Underwood, among many others. By lending her name to our efforts, Pamella demonstrates both her aspirations for the program and her trust that we will achieve what we envision.”

Indeed, the Pamella Roland DeVos name will help to open many exclusive doors in the fashion industry, presenting unique opportunities to KCAD fashion studies students. Already, Roland DeVos’ connections have facilitated a partnership between the program and NYC’s internationally-recognized Fashion Institute of Technology (FIT) that will allow KCAD fashion students to spend one year of their college career studying at FIT. Roland DeVos is glad to assist in making such dreams come true for students of a program she sees as an up-and-coming national leader in fashion education.

“My husband, Dan, and I believe that this program is poised to take off and we are thrilled to be participating at the ground level,” she said. “I’m excited for the students to have extraordinary opportunities to hone their craft and pursue their passion in the fashion world. Designers are the engine of the fashion industry and I look forward to watching Kendall graduates become a force in the field over the coming years.”

Rosen is impressed and honored by the DeVos’ belief in and commitment to the young KCAD Fashion Studies program.

“It is easy for a donor to put their name on something that is already established,” he said. “But to invest in a start-up enterprise is entrepreneurial in the highest degree and resonates with Pamella’s spirit and the spirit of this community. Such an investment at the outset not only makes success much more likely, but it also makes its impact exponential. The fashion industry will soon learn the true impact of this generous gift by looking at the next generation of designs that appear everywhere from New York City runways to mid-American suburbs.”

The gift also allows KCAD to give the new program a home in the Woodbridge N. Ferris building. The five-story Beaux Arts structure, which was constructed in 1909, is on the National Register of Historic Places and has garnered multiple industry awards, including the Governor’s Award for Historic Preservation and LEED Gold Certification by the U.S. Green Building Council.

As president and designer of the acclaimed PAMELLA ROLAND label, Pamella Roland DeVos channels her artistic appreciation and creativity into all of her collections. She designs for the confident woman with exceptional taste. In 2010, Roland DeVos was inducted into the Council of Fashion Designers of America. She serves on the boards of several arts and civic organizations, including NYC’s Whitney Museum of American Art and Chicago’s Joffrey Ballet, and is an honorary life trustee of both the Grand Rapids Art Museum and the Grand Rapids Symphony Orchestra.