When the American Advertising Federation announced its National ADDY Awards this year, you may have heard a cheer going up from downtown Grand Rapids. KCAD Graphic Design graduate (December 2021) McKenna Phillips was thrilled to be among the winners, earning two National ADDY awards for her logo and integrated branding for the Kalamazoo Institute of Arts.

These prestigious awards were a first-time honor for Phillips, and another feather in the cap of the Graphic Design program, whose students have earned 14 National ADDYs since 2006, including wins in 2021 and 2022. Drawing around 30,000 submissions every year, the three-tier competition selects the best work at the local level before advancing winners to compete at the district and then national levels. 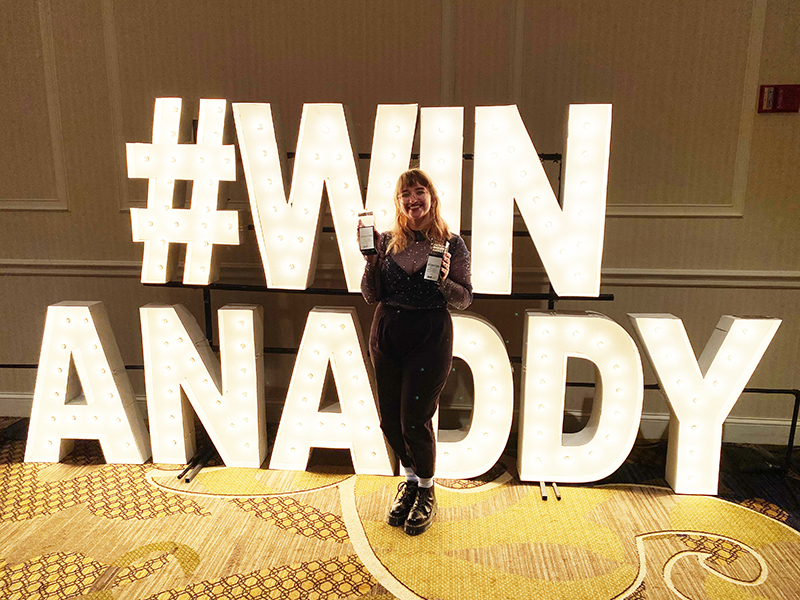 Phillips’s projects grew out of an assignment in the Integrated Systems class, led by adjunct instructor John Koziatek.

“Students were asked to identify a misaligned existing brand and refresh, redesign, or expand its existing brand identity,” says Koziatek. “McKenna followed the project's rigorous process of researching, analyzing, rationalizing, strategizing, designing, and implementing her solution for her selected brand.”

Phillips worked to breathe new life into the existing Kalamazoo Institute of Arts logo, which she felt was outdated, along with its inconsistent copy voice and tone. She explains, “The current logo the KIA is using is a sweeping, crayon rainbow-like image. I feel like my logo is more reflective of what the KIA actually looks like architecturally. The gallery space in the KIA is very open, clean, sharp. I wanted the logo to be a preview of what the actual experience was like walking in.” 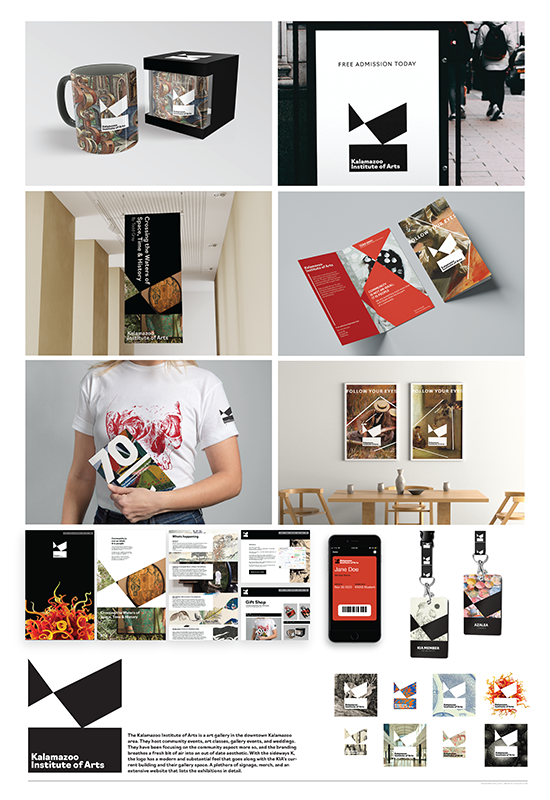 Overview of Phillips' National ADDY-winning project, in which she envisioned a rebrand for the Kalamazoo Institue of Arts

By turning the letter K on its side, she created an instantly iconic triangular logo with the space to showcase any exhibition they choose. “I was already playing with triangles and had seen other logos that were diluted into basic elements,” she explains. “My sharper sideways K was more modern and angular than the pool of choices that I was asking my peers in my class about.”

The open space of the shapes also made the logo more versatile. “I wanted it to be a blank canvas for highlighting the art or exhibits that would be with it, and when I put different pieces of art behind it, it worked almost every time,” she says.  “The actual branding doesn’t have a specific color, which is against the rules of branding, but why should there be one color if it doesn’t go with the exhibit? Ideally, in an official branding guideline there would be more stiff rules regarding if the logo is to be opaque or translucent. But my rules were to put as little color as possible and let the art speak for itself. The point of the branding was to be flexible to fit the art it’s showcasing as much as possible.” 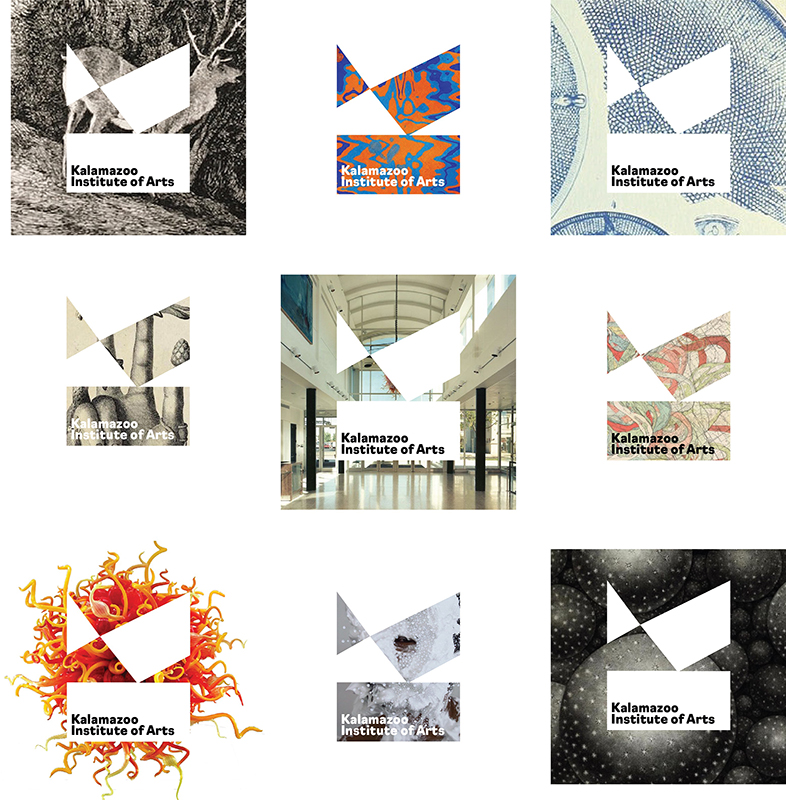 (above) various treatments of the logo Phillips proposed for the Kalamazoo Institute of Arts; (below): a mockup of wayfinding signage included in Phillips' project 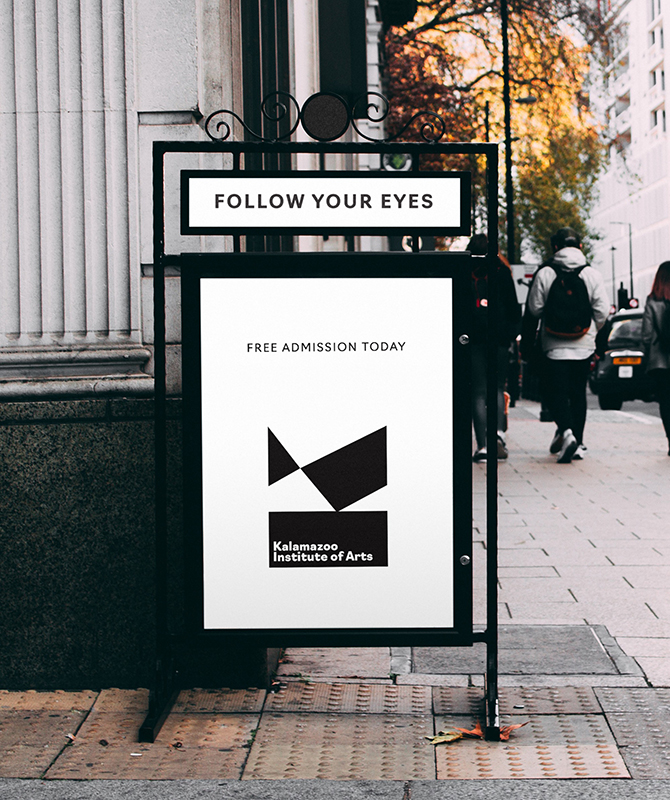 After developing the logo in Koziatek’s class, Phillips went through multiple phases of review and revision before further refining it in her portfolio class. “That’s when I started to really shine it up and make it what it is today,” she says. While she’s no longer in school, she’s still fine-tuning her vision of the brand. “I plan on expanding it in the future by adding a billboard and expanding the website,” she says. “The reasoning is to create a more believable and robust branding campaign.”

To Koziatek, that fierce commitment to the creative process shines through in the quality of Phillips’s final project.

"McKenna has created a holistic and inclusive experience consisting of an integrated branding system and campaign for Kalamazoo Institute of Arts that better reflects who the brand is, what it does, and why it matters to its audience,” he says. “These National ADDY Awards are a testament to her design thinking and making skills.” 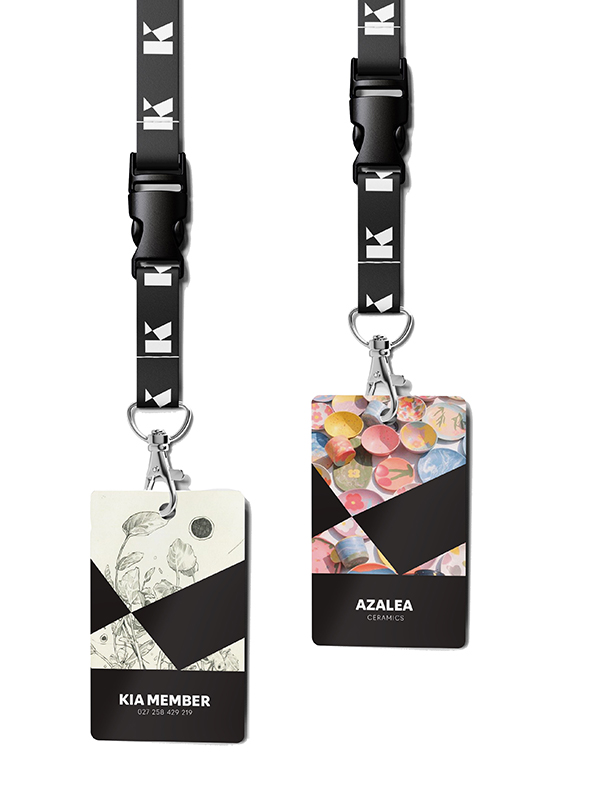 In her winning project, Phillips also included mockups of visitor ID badges (above) and venue signage (below) for the Kalamazoo Institute of Arts 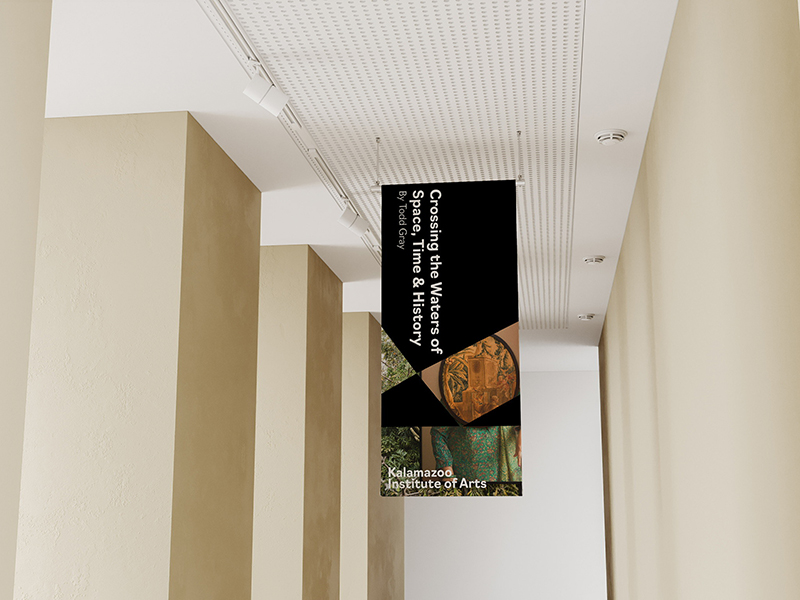 Professor and Program Chair Angela Dow agrees, saying, “McKenna is a highly visual designer, using bold imagery and graphic styling to tell stories and compel the audience to engage with the client and the content. She has a unique point of view that is infused in all of her work, and she commits to her concepts and will use every resource at her disposal to bring them to life.”

“The faculty regularly encourages our students to showcase their immense talent and their smart, creative, innovative work by entering the local ADDYs, and each year, our winners get a lot of notice from the industry and have been invited for job interviews because of it,” she says. “This award is a validation for McKenna’s hard work and commitment to her creative vision, and it helps to demonstrate that our program and our institution can compete with any other in the country.”