Few fields embody the goals of a STEAM education like medical illustration, which integrates science, technology, engineering, art, and math to visually communicate anatomy and medical procedures. At Kendall College of Art and Design of Ferris State University (KCAD), students in the Life Sciences and Pre-Medical Illustration program are propelled toward a career in this evolving field through a dynamic and highly connective curriculum.

Under the leadership of Associate Professor and Program Chair Kevin Brennan, the program has been both renamed and reimagined as a pre-professional degree program— with student emerging prepared to work in the field of life sciences illustration or pursue further study in a graduate program. 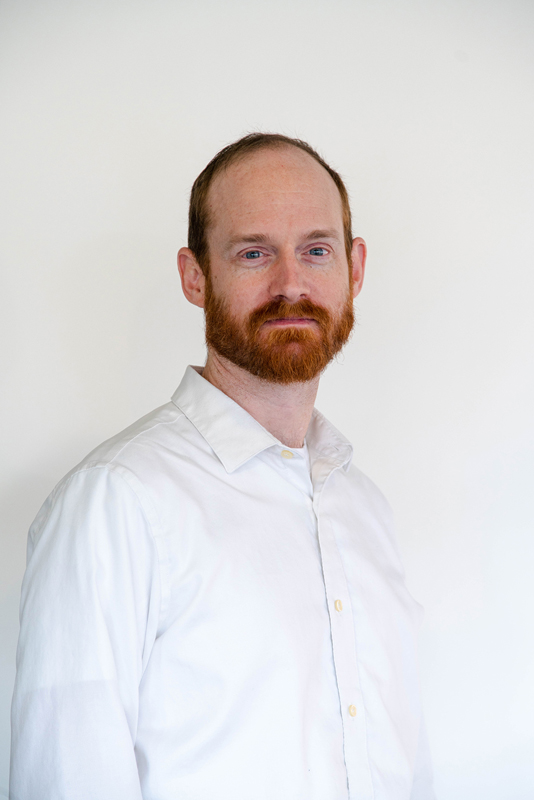 A certified medical illustrator who holds a Master of Science in Biomedical Visualization from the University of Illinois at Chicago, Brennan joined KCAD in 2020 and has been leveraging his experience and network connections to ensure course offerings and program outcomes continue to grow in step with industry realities.

He explains, “It’s all about ensuring we’re meeting the expectations of graduate programs and entry to the field. I’m putting a strong emphasis on research and working with content experts to make sure students can create clear, accurate illustrations.” 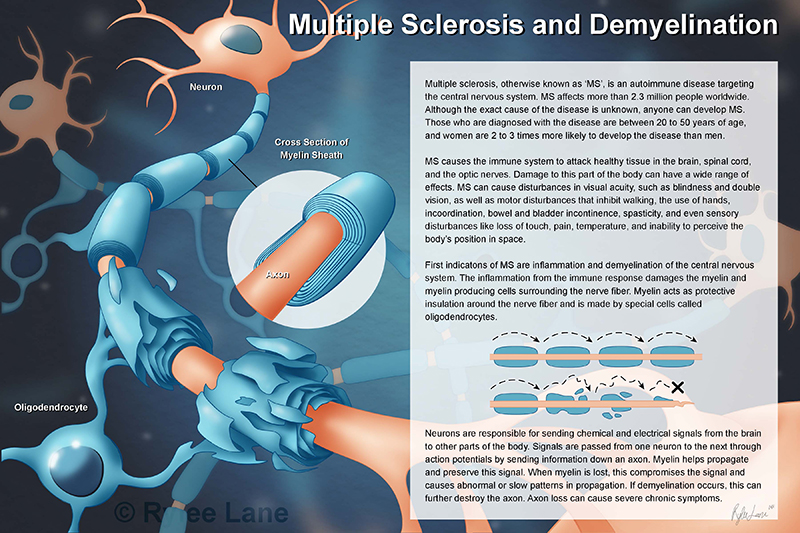 Examples of student work from the Life Sciences and Pre-Medical Illustration program; (above): "Multiple Sclerosis and Demyelination" by 2021 graudate Rylee Lane; (below): "Upward Fixation of the Patella" by 2021 graduate Kristina Smith

Part of meeting that goal has been getting the work coming out of the program into more public forums like the Grand Rapids Public Museum's recent "Marvels of Medicine" event. Brennan and several of the program’s alumni and current students presented a showcase of life science illustrations and medical illustrations as part of the high-profile event’s larger exploration of the rich history of medical innovation in West Michigan. 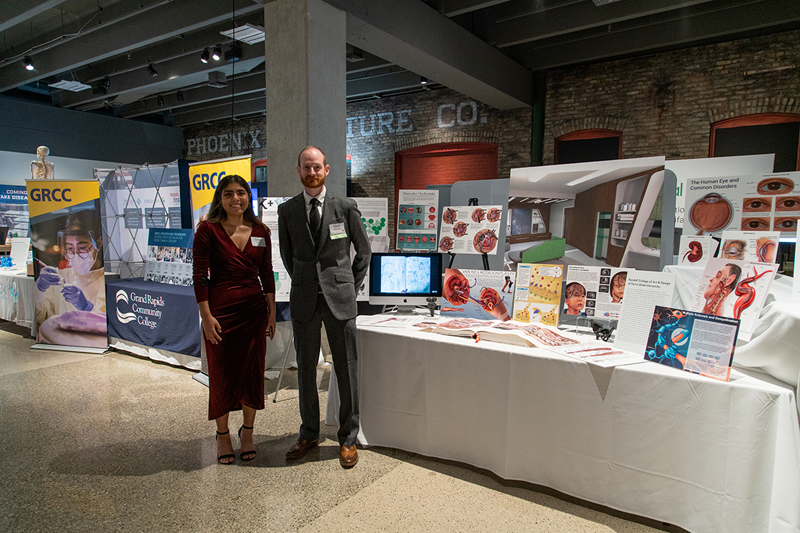 (above): Brennan and Life Sciences and Pre-Medical Illustration student Grace Fowler at the Grand Rapids Public Museum's recent "Marvels of Medicine" event; (below) the event was a great opportunity for theprogram to showcase the high-caliber of student work and the fasinating research and creative processes behind it 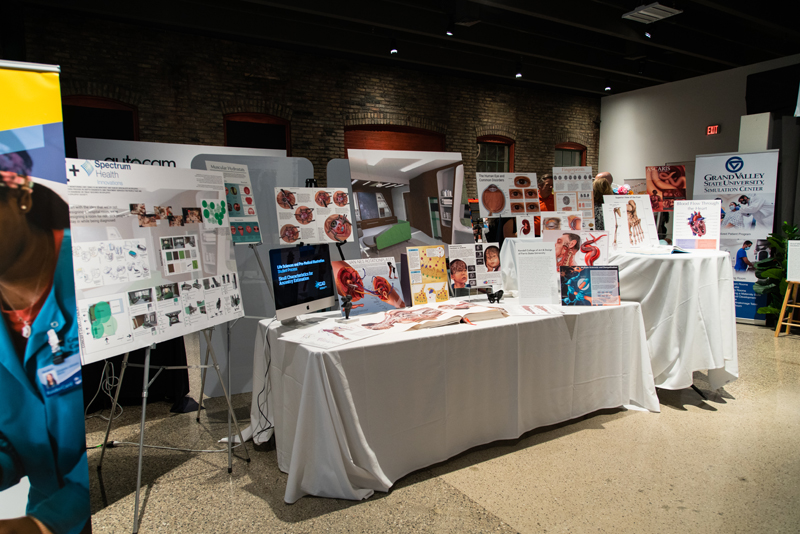 Another aspect has been working to solidify KCAD’s partnerships with other institutions, including the nearby Michigan State University (MSU) College of Human Medicine, where students have access to the college’s Cadaver Lab and Library. Brennan has also teamed with the Center for Forensic Anthropology based out of Northern Michigan University, allowing students to collaborate with Dr. Jane Harris, a forensic anthropologist, who is experienced in generating what is referred to as the "biological profile" (age, sex, ancestry, and stature) by analyzing the landmarks, measurements, and other characteristics of the human skeleton.

Brennan and a pair of students also collaborated with the MSU veterinary department on an in-class project resulting in work that will be used in a session at the 2022 American College of Veterinary Internal Medicine Forum, the largest annual conference of its kind. He explains, “We don’t have a class on veterinary anatomy or surgery, but when working with a content expert, you can apply what you know of anatomy.”

Attending the Association of Medical Illustrators (AMI) conference in July provided another opportunity to learn from peers in the field.

“There’s a salon and technique showcase at the conference where illustrators show their work and how some of it was created,” Brennan says. “It varies from traditional pen and ink to augmented virtual reality and 3D printing. It’s a great opportunity to get a sense of where the field is going.”

While at the conference, Brennan says he received a lot of positive feedback about the direction of the Life Sciences and Pre-Medical Illustration program. “Our students are getting an increasingly accurate sense of what they should expect when they go out into the profession,” he says. “I feel that because of my experience in a professional production environment and in academia, I can share what both are like and provide guidance on how to prepare for graduate school or start off professionally and what skill sets employers are expecting.” 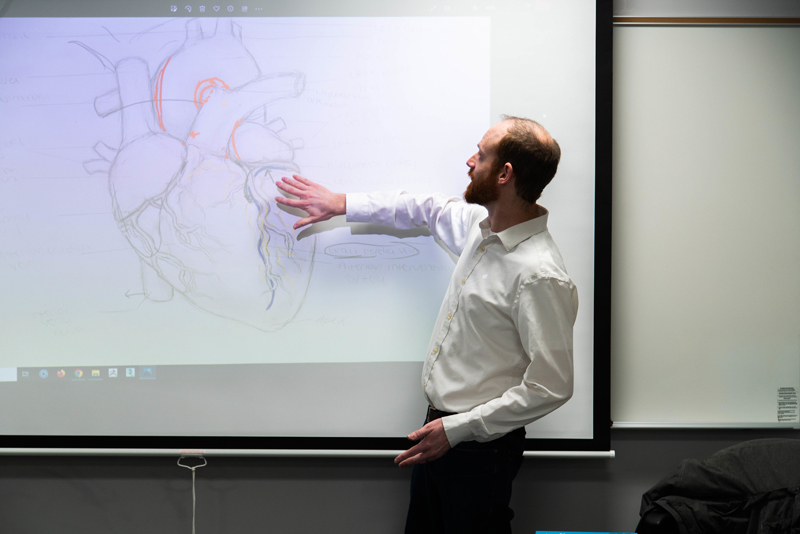 Brennan also prioritized making connections with fellow AMI members, several of whom have since become presenters to his professional practices class on a wide range of topics from business operations, marketing, and freelancing to portfolio development, copyright processes, and project management.

“We want to give students the widest view possible of the opportunities available to them in life sciences and medical illustration,” he says. “Hearing straight from professionals about how they’ve established themselves in the field and sustained a successful career is a powerful way for students to enlarge their sense of possibility.”

Beyond generating positive buzz and building bridges within the industry, the AMI conference also gave rise to a pair of high-profile accomplishments that further strengthened the program’s growing reputation:

2022 Life Sciences and Pre-Medical Illustration graduate Josie Hydell won the Excellence Award for Medical Illustration in the category of “Student Didactic/Instructional – Surgical/Clinical Procedures” at the AMI Salon. Chosen from a pool of undergraduate and graduate work, her illustration “Van Nes Rotationplasty" showed a complex surgical procedure that involves removing a cancerous knee and converting the ankle into a “new knee” for a high-functioning prosthetic. 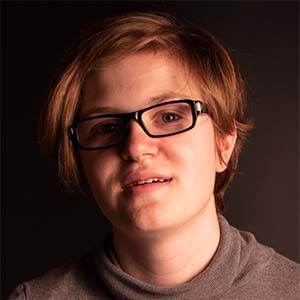 True to Brennan’s vision for the program, Hydell researched extensively throughout the entire creative process using primary literature and video and got feedback on her sketches from content experts prior to beginning her final rendering.

“I read a lot of papers to get the necessary details of how the procedures were performed and what structures were attached to each other,” she says. “Once I had a good understanding, I studied the relevant anatomy at the MSU Cadaver Lab. When I began illustrating, my KCAD and MSU professors reviewed my sketches for anatomy advice and corrections.” 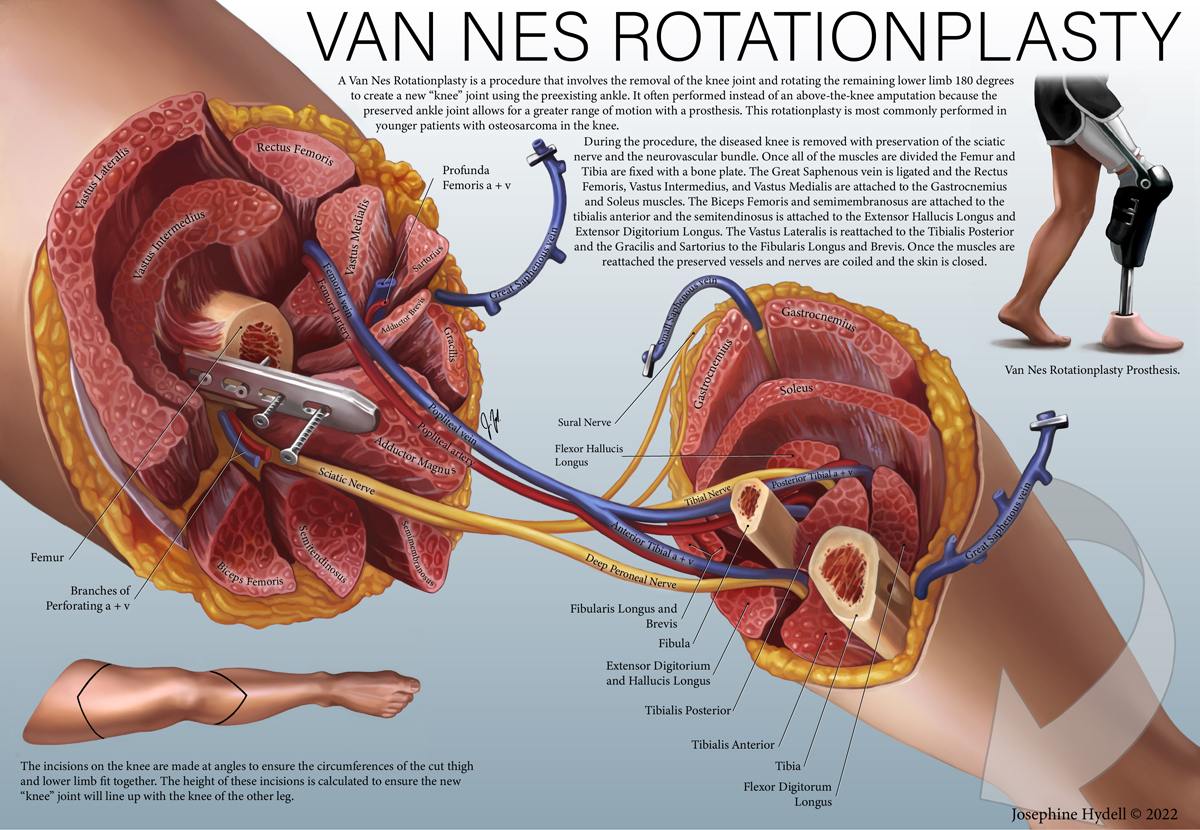 Brennan noted, “The number of hours watching surgical videos and referencing photos, as well as the primary literature Josie read and incorporated for the Van Nes Rotationplasty, were exhaustive and admirable. She was able to select a key step in the procedure and then map out which nerves, arteries, and veins from the upper leg connected to those in the lower leg. Not only is her work beautiful, but it is clear and didactic for the appropriate audience.”

Looking back at her education, Hydell says, “I loved art since I was a child, and when I was in high school, I loved anatomy. When I realized I could combine them, I knew that's what I wanted to do.”

Following her graduation from KCAD in 2022, Hydell now works as an illustrator at MedLegal Illustration in Florida.

At the AMI conference, Brennan was one of three professionals inducted as an AMI Fellow. Among the most distinguished honors bestowed by the organization, the title of Fellow recognizes members who have generously contributed their skill, time, and effort to the profession.

Brennan served as a Salon Judge for the AMI on three occasions, presented in techniques showcases on 3D animation and protein visualization, and led half-day workshops at the annual conferences. He also serves as a board member and co-editor of the peer-reviewed Journal of Biocommunication and helped the publication transition from paywall-protected to an open access model that allows everyone to search it.

Demonstrating his commitment to research and knowledge sharing, Brennan authored a manuscript on turning 2D data sets into a 3D model for use in virtual reality and co-authored a paper titled “The Science Behind G Protein-Coupled Receptors (GPCRs) and Their Accurate Visual Representation in Scientific Research.” He has contributed to multiple posters and abstracts at the AMI conferences.

As the 2022-2023 school year begins, Brennan looks forward to preparing another cohort of KCAD students to continue their career path in medical illustration.