Posted May 8, 2013 in Federal Building Updates

Kendall College of Art and Design, Ferris State University and five other recipients were presented with 2013 Governor’s Awards for historic preservation at a ceremony in the state capitol rotunda. Burney Johnson, deputy director of the Michigan State Housing Development Authority and State Historic Preservation Officer Brian Conway hosted the event on Wednesday, May 1.

Ferris received the award for its renovation of the historic Federal Building in Grand Rapids. University partners in the project, Christman Capital Development Company, the Christman Company, TowerPinkster Architects, Hopkins Burns Design Studio and the city of Grand Rapids were also a part of the award. 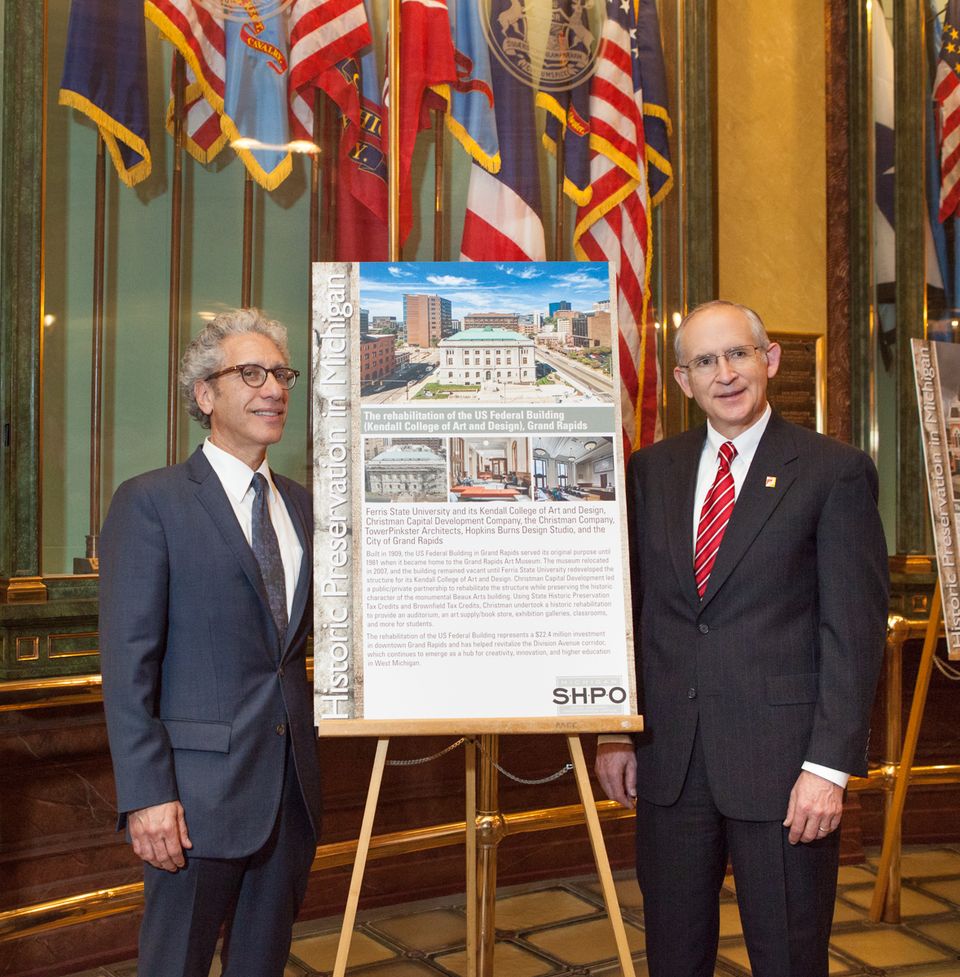 “It is important to recognize the people transforming Michigan by rehabilitating our historic buildings and downtowns and protecting our archaeological sites,” Johnson said. “The Governor’s Awards for Historic Preservation enable us to thank these people for dedicating their time, their energy and their financial resources to make a difference for Michigan.”

“We urge planners and other community leaders to consider historic properties unique assets and to capitalize on those assets,” Conway said. “The Governor’s Awards helps educate and raise awareness of the possibilities for redevelopment.”

Ferris President David Eisler noted that the university had renovated the Federal Building as an asset for Kendall College of Art and Design students, and did so while also meeting Gold Leadership in Energy and Environmental Design standards.

“In renovating this historic structure, we worked to honor the past, reflect the environmental sensitivities of the present and anticipate the needs of the future,” Eisler said. “We believe that honoring both the sustainability and usability of this building sets an example for both Kendall and Ferris students.”

In addition to Ferris, the other 2013 Governor’s Award recipients are

The State Historic Preservation Office, of the Michigan State Housing Development Authority, initiated the award program in 2003 to recognize outstanding historic preservation achievements reflecting a commitment to the preservation of Michigan’s unique character and the many cultural resources that document Michigan’s past.