By 1980, Kendall had a national reputation as an exceptional school for teaching design. What it didn’t yet have was a focus on the fine arts, but a young painter and printmaker working in Chicago was about to play an important part in changing that situation.

That summer, the college hired Jay Constantine, MFA, as Professor of Painting, a position he held until his retirement in 2020. “I’d been doing a lot of part time teaching for years,” says Constantine, “But this was my first full-time gig, and a chance to work with students at a school that was very well thought-of in the area of design.” 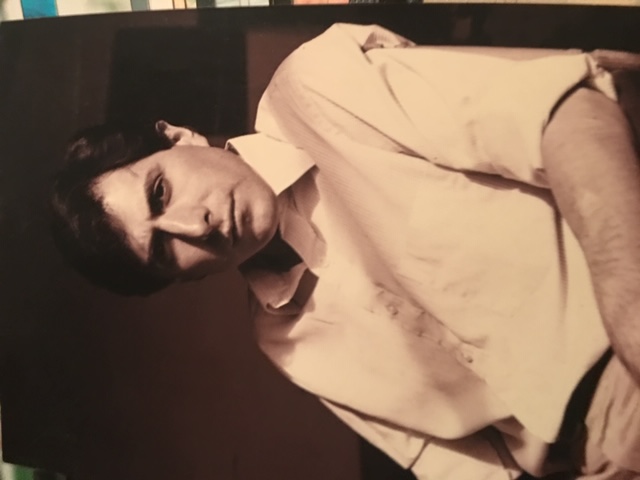 (above and below): As a young artist, Jay Constantine would come to KCAD and forever alter the trajectory of the college through his thoughtful teaching, broad artistic experience, and leadership in expanding fine arts program offerings 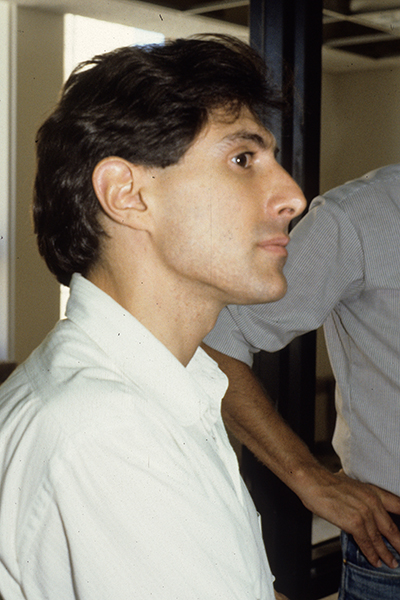 At the time, the college was offering a program in general fine arts, but no majors in drawing, painting, sculpture, or printmaking.  “In the mid-1990s, I wrote a proposal to establish a painting major,” says Constantine. “Then a few years later, I spearheaded the effort to create the MFA.”

The narrow focus on painting was somewhat uncommon in higher learning, but it seemed to fill a niche. “A lot of schools at the time were taking an interdisciplinary route,” says Constantine. “That was the trend. But when attending portfolio days, I started to see a lot of people whose portfolios were full of paintings. They wanted to continue painting but had been discouraged by interdisciplinary schools. I, of course, really loved painting, so I said, ‘Come work with us. We won’t tell you to stop painting. We want to help you get better.’” 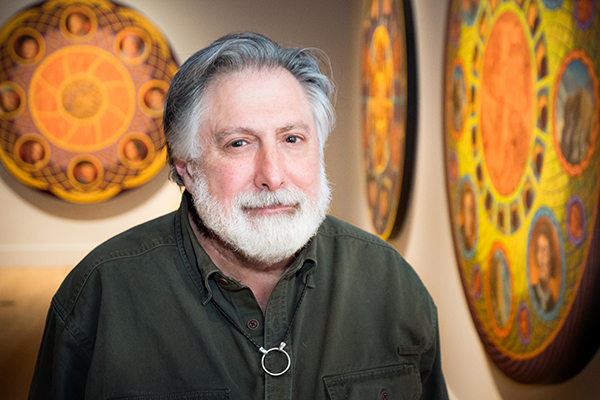 (above): Constantine posing in front of works from his "Anti-Icons" series that were on display at KCAD as part of a faculty sabbatical exhibition; (below): "Heretical History: The Münster Revolt" from Constantine's "Anti-Icons" series, which explores the conflicts between science and religion as well as historic controversies over heresy and orthodoxy 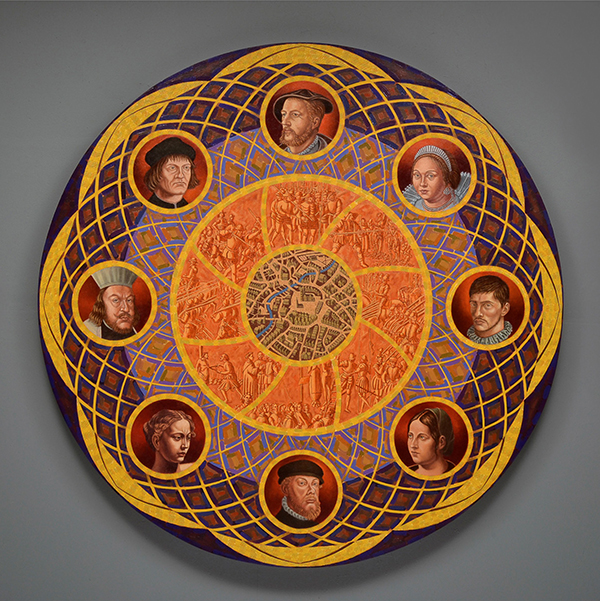 As Chair of the Kendall fine art program and the painting program, Constantine was instrumental in creating the undergraduate painting major and the MFA in painting. Soon, the painting MFA attracted a large audience, drawing up to 23 students at one time. “We brought people from Chicago and other places to Grand Rapids,” says Constantine. “Many of them stayed here, and I like to think that at some level, it contributed to the general art scene in Grand Rapids.”

Over the years, Constantine developed a two-prong approach for teaching students. “In the beginning classes, I really focused on technique,” he says. “The best thing to do is give people a skill set first. Then we could address how you get ideas, how you research an idea and develop it. I really emphasized research and brainstorming. It’s as important as technique, and you have to develop it as a skill. In a way, it’s the hardest thing to do.”

To help students cultivate their own ideas, Constantine encouraged them to journal, research, and brainstorm as a team. “There were no sketches yet, and nobody owned the ideas. We just talked openly. People would chime in, get suggestions, and learn to shape and form an idea.” 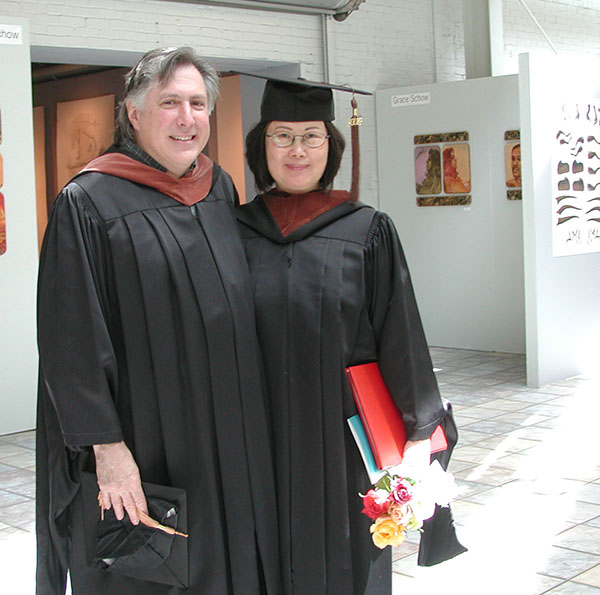 (above): Constantine poses with a graduating student in the afterglow of a KCAD Commencement ceremony; (below): Constantine sharing critical insight on his creative process and artistic practice during an artist talk held in conjunction with an exhibition of work created during his faculty sabbatical. 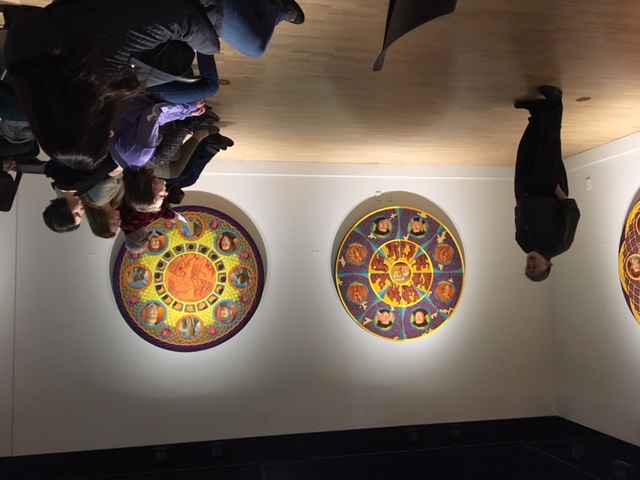 The technique-first approach contrasted with his own training at Cleveland Institute of Art (BFA) and Northern Illinois University (MFA). “My own education was pretty open-ended,” says Constantine. “At the time, colleges weren’t teaching a lot of technique. You were supposed to be creative, inventive, and experimental, but a lot of us didn’t get a traditional grounding in technique.”

“So, many of the skills that I use in my own work, I learned at Kendall by teaching them,” he says. “You teach the course you wish you’d had as a student.” That foundational knowledge includes knowing how to compose a picture plane, using perspective to draw objects, understanding the figure, and constructing mass and volume. “That traditional grounding is the thing I hope I gave people,” he explains. “Not that you want to stay there. My own work is not that traditional, but getting that background as undergirding for more advanced work is valuable.”

He’s also shared more specific techniques as he added them to his own skillset. “I went through a period where I was doing a lot with glazing, and I realized I could bring that to the classroom,” he says. “I also introduced encaustic painting, a hot wax painting process, to Kendall. Very few students had any background with those processes until then."

Throughout his career, Constantine has continued to be a working artist, juggling teaching, family responsibilities, and studio time. “It’s not always easy to find the time for your own work, but I always thought it was really important,” he says. “It also has an impact on your teaching. If you’re not conceptually growing in your work as a teacher, it can be not so good.” 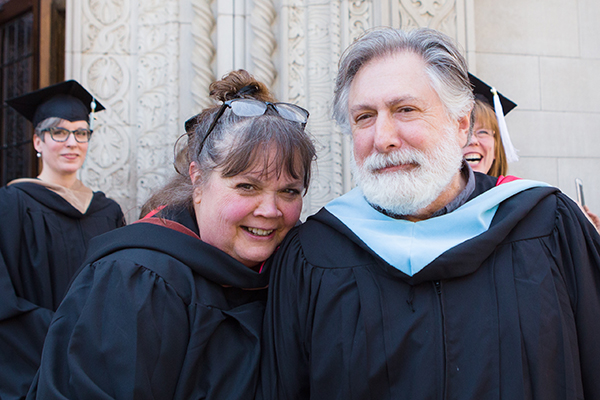 Constantine with his wife, KCAD Professor Patricia Constantine at a KCAD Commencement ceremony (above), and with daughters Sofia and Antonia (below) 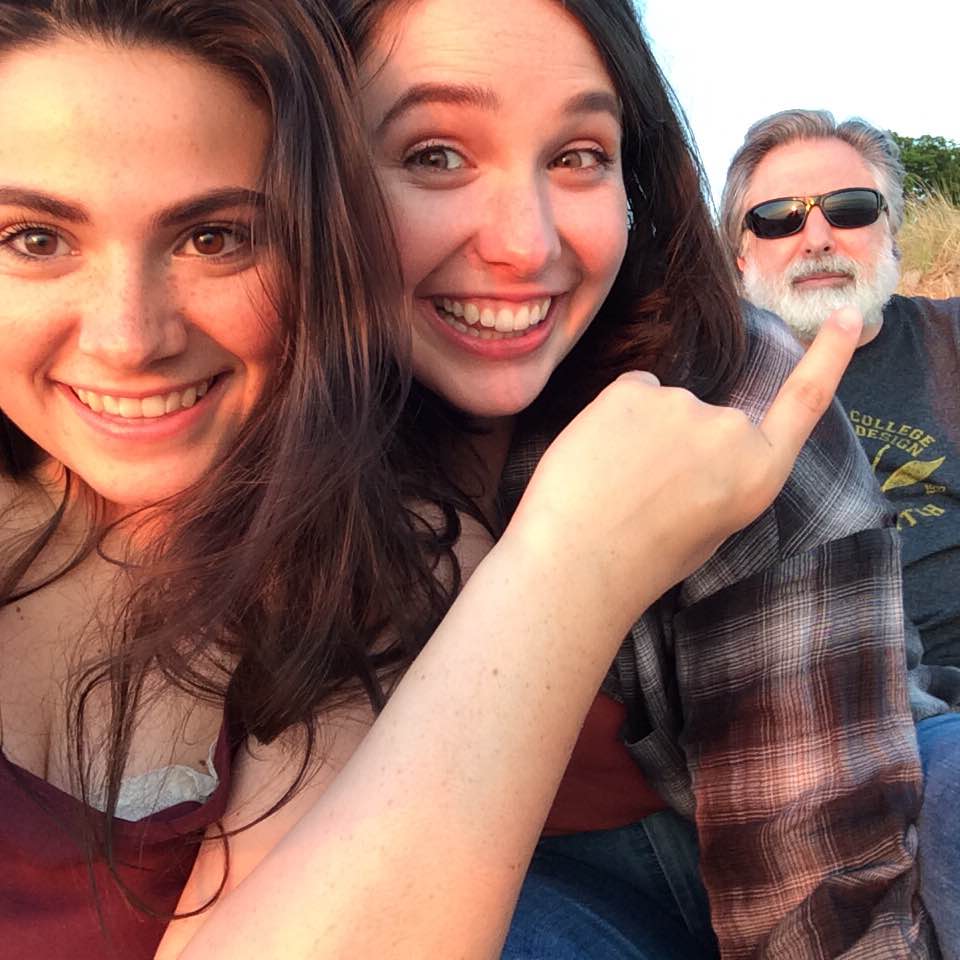 His own work has often referred to science and history. “Since 2015, I’ve been doing my own version of history paintings, in some cases revisionist history that people don’t know about or have a different understanding of,” he explains. “Some of the best and most interesting stories are in history. You don’t have to invent them. If you can spin them a little differently, you can really have some fun working with that kind of subject matter,” he says.

This historical focus involves a lot of research and reading. “I’m also an incredible borrower,” says Constantine. “I’ve borrowed the format from mosaics I’ve seen, and I’m often quoting from classical works and pulling historical imagery into my work. Conceptually, it’s given me something else to bring to students: how to research, and how to develop ideas.”

He continues, “Sometimes, painters do so much work on technique that they forget the important work of researching and developing ideas. I always feel that those things are both important. Of course, technique is huge for me, but if painting is going to survive in the current climate, it has to show it can keep up with ideas.” 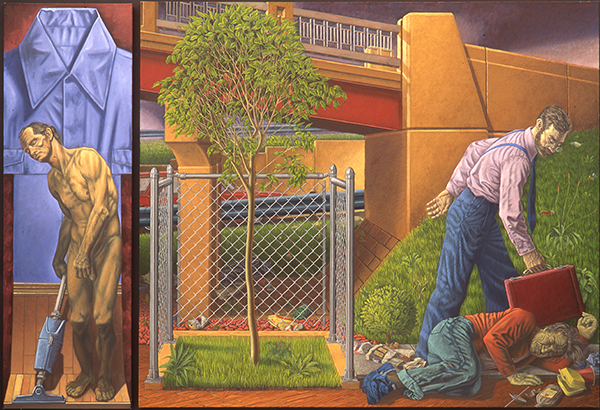 (above): "The Exit Ramp" by Jay Constantiune; (below): Constantine at work in his studio 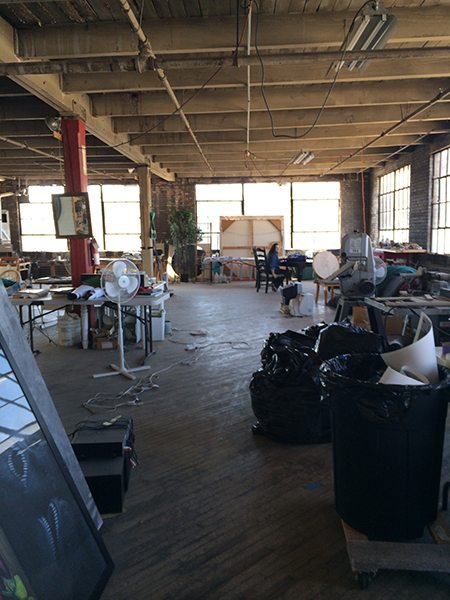 What’s next for Constantine, now that he’ll no longer be teaching at KCAD? “Being a full-time artist,” he says with satisfaction. “Right now, I’m working on a painting, and I’m finding that the speed with which I can work is phenomenal. Teaching gives you a whole summer for your work every year. I’m grateful for that, and if you’re an artist, it’s a great way to work. But now, I can get up every day and paint, and I’m really loving that. When you’re an artist, you’re never really retired,” he says. “What it means is you’re working full-time on your art. I have to admit it’s pretty great!”

Constantine’s work is currently represented by Art-Commerce at 1stdibs., and it has appeared at Brenda Taylor Gallery in the Chelsea Gallery district in New York, Woodward Gallery in New York City, in the Fall 2012 Direct Art Magazine vol. 19 published by Barnes and Noble, and in Studio Visit Magazine. 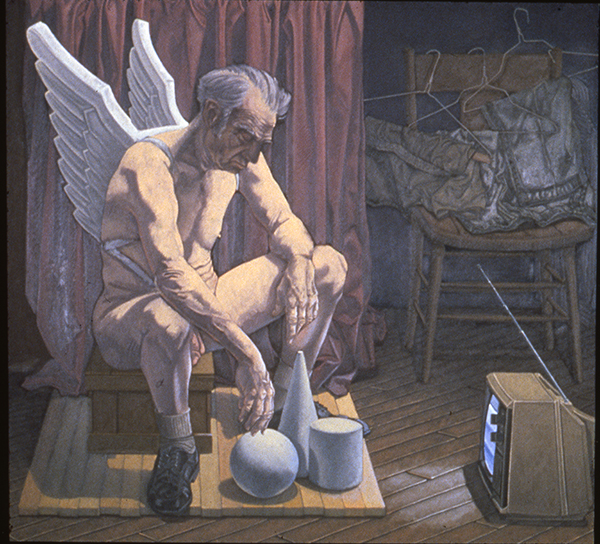 (above and below): work by Jay Constantine

During his career, he has received grants from Arts Midwest/Regional NEA, Art Serve Michigan, the Michigan Council for the Arts, and the Arts Foundation of Michigan. He also served as an Artist-in-Residence at the Urban Institute for Contemporary Art.

Currently, Constantine's work is held in in the Grand Valley State University permanent collection, the Grand Rapids Art Museum, the Muskegon Community College collection, the Kalamazoo Institute of Art and Pratt Graphics Center, and several private collections. His work can also be seen at jayconstantineart.com.