Professor Jon McDonald Retires After 40 Years of Pushing Students, Viewers, and Himself to Transcend the Comfort Zone

Professor Jon McDonald is an accomplished artist and teacher, but he’s also a born observer who looks at the world intensely from behind his dark glasses, seeing truth and potential wherever he goes from the darkest days of American history to city streets and college and K-12 classrooms. And now, after retiring from Kendall College of Art and Design of Ferris State University (KCAD) in the spring of 2020 following a 40-year career, he's looking forward to what lies ahead. 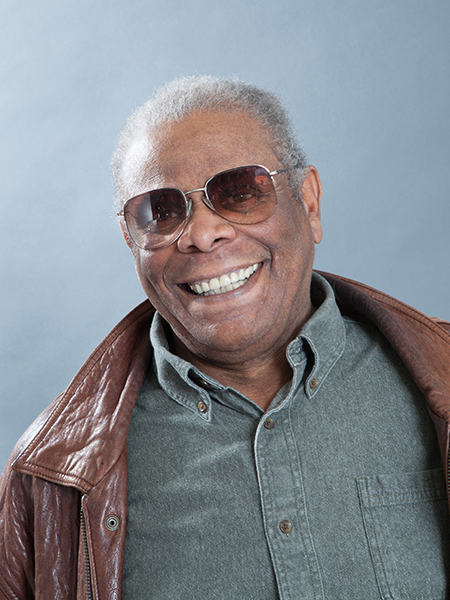 Born in Jackson, Mississippi, McDonald moved to Grand Haven as a child.  When he was a senior in high school, he saw a Black artist doing portraits at a Grand Haven art fair, and he stayed to watch him work all day. That afternoon awoke a passion that would lead him to study illustration at KCAD and later at the San Francisco Art Institute, where he earned a master’s degree in fine art.

After graduation, he worked as a freelance illustrator for a while and taught drawing and painting at Everyone’s Village, a community arts organization in Los Angeles. In 1980, he moved back to West Michigan to be near his parents and was hired to teach at Kendall.

McDonald helped create the college’s Illustration program, serving as its chair from 2012 to 2016. “When I first started, I didn’t know I was supposed to teach theory. I just taught what I knew,” he said. “My goal was to equip students to go out and get a job. I’d been out there and knew what it took. You have to do the job the client asks you to do. It doesn’t matter how ‘good’ you are—no one’s going to hire you if they can’t trust you to do what they’ve asked you to do.” 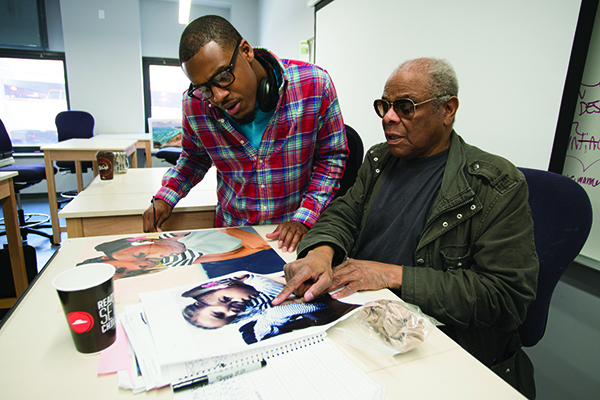 That meant helping students build up a diverse set of skills and get comfortable with multiple illustration styles. “If you do cartoons and they don’t want cartoons, you don’t eat,” he explains. “If you can draw and paint well, so many doors will open, but if you limit yourself to one medium or one style, those doors are going to start closing quickly. The more skilled you are, the more diverse you are, the faster you’re going to be able to build yourself up.”

McDonald also made an effort to show students that being a working artist meant walking the line between artistic purity and living in reality. He explains, “I do surrealism, which I focused on in graduate school, when I really want to have some fun. But I need the technical knowledge, so I do things like city scenes and portraits, and I try to make them better each time. I walk both paths.” 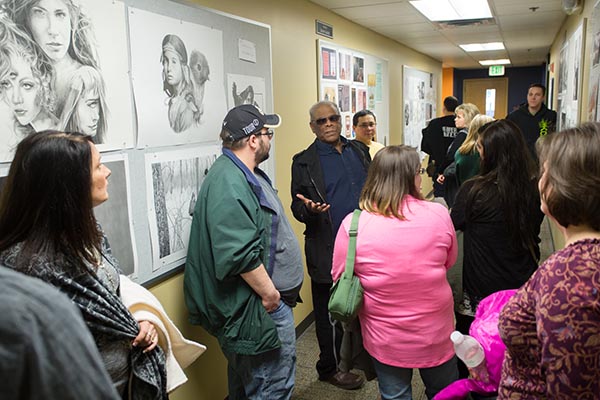 McDonald interacts with prospective KCAD students during a campus visit

His students were expected to work hard, and he didn’t hesitate to ask them to dig deeper. “I tried to treat students the way my parents raised me: I had high standards,” he says. “This approach requires me to constantly be working on my own art. Every day, I paint or draw on my own to get better at it.”

“I always told my students that if they don’t push themselves so far that they fail, I will fail them!” he says.

His best advice to students was always, “Make mistakes and challenge yourself. I don’t care if you screw up. All I want to see is progress. Then they can do better work without fear.” 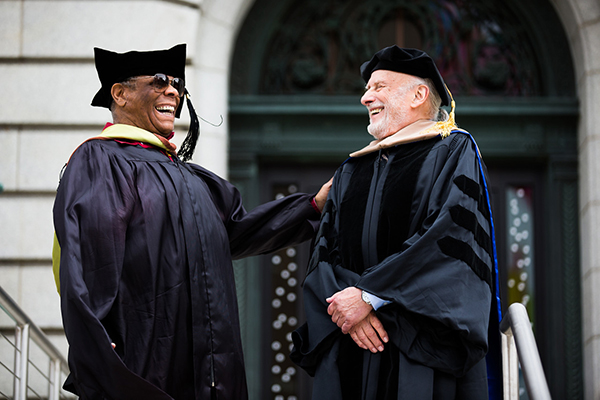 As a professor at KCAD, McDonald believed that his students needed to see him as a working artist. He specializes in watercolors and oils, covering themes ranging from Native American and African American history to cityscapes and portraits of blues musicians.

Early in his career at KCAD, a mutual friend introduced him to philanthropist Peter Wege, who was looking for ways to enrich the education of young students. Wege funded McDonald’s visits to Russia, New York, and the Costa Rican rain forest, inspiring his series on famous Black Americans and the environment. After the paintings were complete, he spent several years visiting schools where he used the artwork to introduce kids to history, new role models, and the importance of protecting the environment. “Some of the kids’ parents had never introduced them to these things. It helped everybody,” he says. 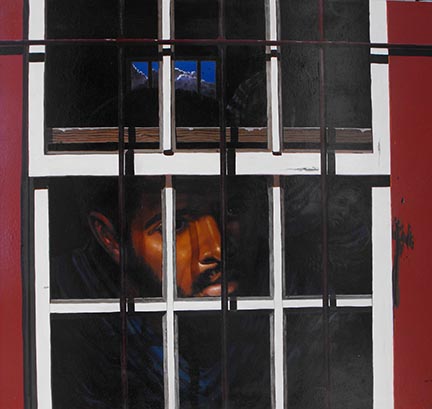 Among his notable works is “Slavery’s Chill,” a series of 12 oil paintings he developed in 2013. The works depict the journey of slaves from capture in their African villages through the long suffering of their boat journey, to being sold in the marketplace, working on the plantations, and eventually, a form of freedom. The series was inspired by the desire to teach his grandson about the damage caused by slavery. “What I wanted to do was set the record straight for him; set the record straight on slavery and all the things it set into motion,” McDonald said. “This type of experience isn’t what you’re going to get from high school or other places you might learn about this part of our history. I thought that if I could create a series that deals with slavery from beginning to end, that I could do it in a way that would have much more emotional and social impact than if I were just to paint a depiction of the underground railroad,” McDonald said. The series was exhibited in Grand Haven, Muskegon, and at the Grand Rapids Art Museum.

Since retiring from KCAD, he continues to paint from his home studio.

Jon McDonald earned an Illustrator’s Certificate from Kendall College and an MFA in painting from San Francisco Art Institute. He began teaching at KCAD in 1980, served as Illustration Chair from 2012-2016, and has been honored with the Giants Award (1995), Grand Haven High School Hall of Fame (2010), and Society of Illustrators Distinguished Educator in the Arts Award (2019).